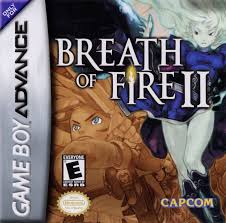 Breath of Fire 2 is the sequel to the popular Breath of Fire. Taking place 500 years after the original Breath of Fire, Breath of Fire 2 follows the adventures of an orphaned boy named Ryu Bateson.The game opens with Ryu as a child. His mother has died, and his father tells him to go find his sister, Yua, who had disappeared. Ryu agrees and the game opens with a warm, hometown feeling. We learn Ryu has lost his mother, who has disappeared in an attack on the village of Gate three years ago. As Ryu progresses to the back mountain, we are treated to the very first battle in the game. A turn-based battle, Ryu must hold off a small monster until his father, Ganer, arrives defeating the monster with more powerful magic and rescuing Yua from danger. Ganer asks his daughter why she is always playing at this back mountain and we are told a story of the life of their mother. Upon returning to the village, however, everything is not as it seemed when Ryu left it. No one remembers his father, the town preacher, his sister has disappeared, and the friendly townspeople regard Ryu as a liar. Staying in his old house, bewildered, Ryu meets Bow, a dog like creature who is likely descended from the Bo from BOF1. Bow is the first of many unique characters in this game . The two of them leave the village, determined to discover what happened, or at least fend for themselves.

Ten years pass and the quest begins. Ryu is now an adult. There's no trace of his family and he and Bow go off to work. They are given an innocuous quest of finding a pet, and from here, a whole new adventure unfolds. We are now allowed to experience the world of Breath of Fire 2 as an adult. The first thing upon leaving the first town is you are attacked. A lot. The encounter rate in this game is insane, especially during the first part of it, when you only have one or two people at most. Like any RPG, Breath of Fire 2 has random battles, but the encounter rate was pushed up to unforgiving in this version. The original Breath of Fire had a high encounter rate too, but this was remedied by use of the Mrbl3 item, that prevented them. Breath of Fire 2 has Smoke, which reduces, but does not eliminate, the encounter rate. This was so annoying that at times I stopped playing. 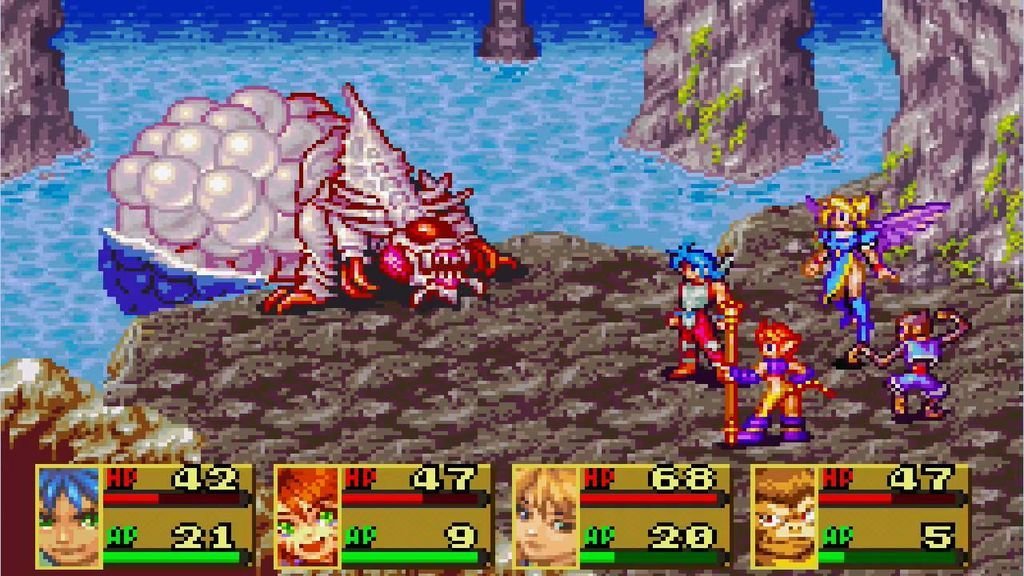 Strong Points: Good sequel to the original; lots of twists and turns; interesting cast of both playable and non-playable characters
Weak Points: Terrible translation; no bonus features for GBA re-release aside from a few new portraits; ridiculous encounter rate
Moral Warnings: Sexual situations; female characters wear next to nothing; and a large portion of the game is blatantly anti-Christian

As the game progresses Bow is charged of a crime he did not commit, and Ryu is forced to explore the world on his own. As you gain more members, the gameplay becomes more interesting, and you get other characters to help you, thus making the encounter rate, while still annoying, at least feasible to deal with. About a fourth of the way through, you encounter a shaman who discovers Ryu has dragon powers, like the first Ryu. However, the dragon system in this game is flawed at best. In the original, Ryu could turn into a dragon and stay one the entire battle. In Breath of Fire 2, Ryu can use these forms only once and then needs to restore his AP(the Breath of Fire equivalent of magic points). Downside is, the AP restoring items deplete your HP. So, you basically have to waste a turn restoring it if you want to use the dragon forms. Worse, several of the forms that are needed for a good two thirds of the game are well hidden and you can only do this if you complete a quest that it is not immediately obvious how to get to. Without these forms, the game is very unforgiving until you get the final form, G Dragon. Other annoyances with the battle system include the slowness of the healer, Rand. As he is your main healer and you are stuck with him for a large part of the game, this can lead to a lot of frustrating Game overs in the first third.

On the plus side for the battle system, the shamans add an interesting touch. Ryu cannot be shamanized nor can another certain character, but the other characters can, and this can greatly improve upon the stats of some otherwise useless characters. The best shaman forms are probably Katt's Devil Shaman form and Nina's Wind/Holy combination. The former lets Katt become a killer on the field of battle and turns Nina into an interesting angel- like creature that can banish all enemies, finally letting you breathe a sigh of relief on those irritating encounters.

The soundtrack is one of my favorite parts of this game. In fact, it was this soundtrack that led me to look for CDs of the music in the day before everything was available on YouTube. Some tracks are annoying and forgetful, such as the whale song, the cave song, and the town song. But the battle themes are upbeat and enjoyable, which is good, since you'll be hearing them repeatedly. The three overworld themes accentuate the theme of the journey and the part of it you are currently in. The first 'We are Rangers!' captures the spirit of optimism at the start of the adventure. The second is the Breath of Fire classic overworld theme that displays the heightened odds and the determination of the crew. The third, 'Our Journey' is a heartbreaking, rendering song appropriate for a final third of the game that is pretty much a tear jerker till the end. Other great tracks are 'The Wonder' which is played on 2 mountains and is the backdrop for a scenario of going back to one's past and making amends. Another favorite is the track for the final dungeon, Infinity, and the piece for the last town in the game that captures the mystery of that town and a people long past. 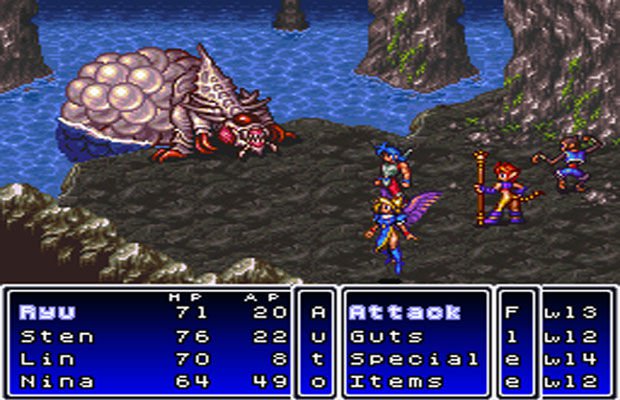 As the story continues, you meet the aforementioned Rand and Katt. Later you meet Nina, Sten, Jean and Spar. The journey this group takes goes from one interesting side quest to another, until finally the main plot is revealed of a huge villain trying to destroy the world. Who is this villain?

The villain area is unfortunately why I cannot recommend this game from a Christian perspective. {spoiler}Breath of Fire 2 not only promotes a religion where one prays to false gods, but has a church called 'St. Eva' which is presented as a false religion whose worshippers are praying to a demon that destroys the world. In a scenario after Ryu finds his father, his father says, 'Being a believer of St. Eva means you destroy the world without knowledge of it.' St Eva's teachings are very close to Catholicism, which is the largest representation of Christianity worldwide. Even Protestants should find this an offensive attack on our faith, especially in the last third of the game when the 'church' is brought down and crumbles and the false dragon god says that the founder of St. Eva is a demon called Death Evans. This is at best a lie and at worst the antithesis of the Gospel. {/spoiler}

That is not to say the game is a total failure from a moral standpoint. Positive aspects include family values, as the game does, in fact, start as a quest for Ryu to find his long-lost family. Nina remains loyal to her birth family in spite of being cruelly exiled, and her relationship with her sister, Mina, is quite similar to a biblical covenant friendship. The crew sticks together despite many hardships. One scenario has Sten, the soldier, facing his past with courage and rectifying mistakes he made from running away.

Other moral problems include the fact that Katt, Nina and Bleu are all barely clothed, especially Katt and Bleu. Nina at least has a dress that covers herself but Katt and Bleu are virtually naked. There are some transgender references with Spar, the androgynous plant character. Several bosses are notably very sexual looking too.

Another weak point is the translation. This does not affect the morality score, but the translation for the Super Nintendo was so bad it was laughable in parts. In some areas, when you are prompted to say yes and no, for example, saying yes will mean no and no will mean yes. Abbreviations are used for many items, and they are confusing at best. For instance, LifePl is an item that will revive your party, but you cannot really tell from the description. The game is terse in parts, which was not the case in the original Japanese version. Worse, they did not even lift a finger to improve it in the GBA version, unlike the Final Fantasy ports which were re-translated well, even if several memorable lines got changed.

This is a good game from a gameplay and a worthy sequel to the original, but because of certain plot points, I cannot in good conscience recommend it to a Christian. If you are able to put on the full armor of God and stand firm against the lie that is shown in the last third of the game, then by all means, go and play it as it is an amazing adventure. However, if you cannot, then I recommend you skip this and play the original Breath of Fire instead. All of the fun elements and the interesting storyline is there and while there is a polytheistic religion, it is not anti-Christian. Also, you can skip Breath of Fire 2 and play 3 and 4 and not miss a thing(at least, in my personal opinion.)