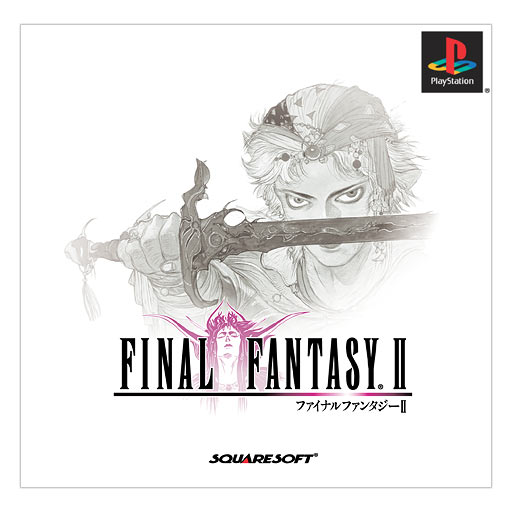 It’s been my personal goal to play through every Final Fantasy game and I have been playing them in order.  I found the original Final Fantasy fun, but lacking in character development.  Final Fantasy II has improved on that along with revamping the class and leveling system.  While I'm not a fan of the broken leveling system, I found this game more enjoyable than the first.

Final Fantasy II starts off with four characters: Firion (you), Maria, Guy and Leon.  After your hometown village has been burned down, your party is whooped by Palamecian soldiers and left for dead.  The rebel princess Hilda has rescued most of your party and needs your help in defeating the evil empire.  Leon is missing and nobody knows his whereabouts.  The princess lends you her magician Minwu to temporarily fill that fourth slot, but don’t get too attached to anyone in that fourth slot; it’s quite the revolving door.

The princess will be giving your party orders to help strengthen the rebel army and weaken the evil empire.  At first, you’ll be sent to check out towns close by, and later you’ll be asked to explore towns that have to be reached by boat, airship, snow sled, or chocobo.  The chocobo is an ostrich-like bird that can take you to land based towns quickly and without having to worry about fighting enemies along the way. 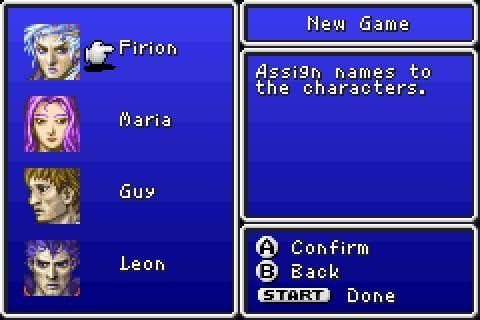 Enemies are hidden and they are lurking outside of towns and inside of dungeons. The battles are completely random with the exception of boss battles which are triggered by stepping on key tiles.  When in battle, you have the choice of attacking, using magic, using an item, equipping an item, or fleeing.  If you win the battle you will get some money (Gil), experience, and occasionally some loot.  After you gain enough experience you will level up and your attributes will increase automatically.

The leveling system is unique this time around.  The more you use a weapon or spell, the more powerful it gets.  If your character takes a lot of damage, their hit points will increase.  If you use magic often, you’ll gain more magic points along with spirit or intelligence depending on the kind of magic you’re using.

Magic spells are sold in Magic shops and each town sells a handful of spells.  Each character can learn up to sixteen spells.  It’s a good idea to have every person learn and level up the Cure and Life spells to heal and revive allies.  After those, it’s best to diversify the magic among the characters. Given that you’ll be fighting elemental enemies, they often have a weakness.  For example, fire enemies will be weak to ice spells. 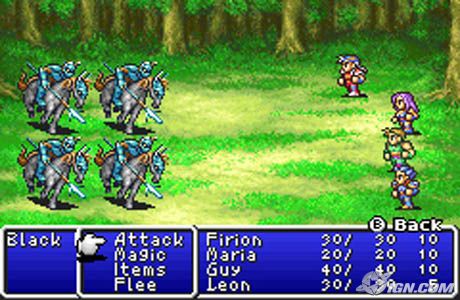 These enemies often have nasty attacks that can poison you or turn you into stone.  Make sure you visit the item shop and stock up on healing potions, antidotes, and golden needles to cure you from becoming a statue.  Another item worth noting is the cottage that can be set up outdoors to give you a place to rest and replenish your Hit Points (HP) and Magic Points (MP).  Each town has an inn and the lower your mana and health is, the more expensive those inns get.  Don’t worry though: money is not an issue later on in the game.  At first it’s hard to come by, but soon you accumulate enough to stock up on $50,000 elixirs that fully restore health and mana.

The graphics have been spruced up to SNES quality from the original Japanese NES version.  The dungeon layouts have not changed from the NES release of the game.  There is a new dungeon, called The Soul of Rebirth, exclusive to the GBA re-release.  The Soul of Rebirth dungeon is extremely hard and I didn’t bother completing it.  There are lots of unique monsters and lots of different colored variants.  For example, a green dragon is completely different than a red one.

The music composed by Nobuo Uematsu is where Final Fantasy really shines.  The towns, shops, caves, and battles have the same music throughout the game.  However, some areas, like The Rebel Castle has its own unique theme song.  The chocobo has a dedicated song too.  The sound effects are decent but I was often listening to the beautiful music instead.

If you like classic Role Playing Games, Final Fantasy II is worth looking into.  I spent close to forty hours playing the Dawn of Souls remake which includes both Final Fantasy I & II.  Had I completed the Soul of Rebirth dungeon, I could have easily spent a few more hours playing the game.  The only appropriateness issues I saw were fantasy violence and magic being used.  There is also a scene where your character is seduced but nothing is shown.  If you don’t mind those elements, you might want to check this out on your GBA, DS (via GBA slot), PSP, or PlayStation, if you can find a copy.