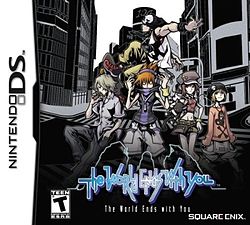 'Outta my face!  You're blocking my view!  Shut up!  Stop talking.  Just go the h*ll away. All the world needs is me.  I got my values, so you can keep yours, alright?  I don't get people.  Never have, never will.'  And this is how it begins.  Neku finds himself in the center of Tokyo's Shibuya district, annoyed with the world around him, and self reliant.  Soon, he realizes that he has this pin in his hand... and that he can hear other people's thoughts when he flips it.  Moments later, he receives a text message with instructions.  'Reach 104.  You have 60 minutes. Fail, and face erasure.  –The Reapers'  And immediately, a timer shows up on his hand, like a moving tattoo.  And frogs show up and start attacking him.  Calling for help, he realizes that no one can see him.  After finding that he can't fight them off alone, a total stranger walks up to him and says 'hurry up, make a pact with me!'  After he reluctantly agrees, they are able to fight off the monsters, called noise.  And despite his great distaste for others, he must work with his new partner, Shiki, to survive.

The World Ends With You is an extremely unique, modern, and Japanese game, where the story unfolds through highly stylized, almost comic book-like scenes with some voice acting, along with a very intricate action RPG battle system.  It's hard to overstate how engaging, and memorable, this game can be.  It is also a game that is uniquely suited to the Nintendo DS like few others, and takes advantage of almost every aspect of its hardware, including frantic, simultaneous dual-screen battles.

Neku and his partner each are in charge of half of the domain during fights.  Neku takes care of the bottom screen, and his partner takes the top.  It is on the bottom screen that he uses his psychs, which are powers that he can derive from any pins he finds.  Pins are a very important part of this game, as you collect them as you go; a perfectionist is likely to want to not only collect every pin, but master them all as well.  After each battle, your pins gain PP (pin points) which eventually helps raise their level, making them more powerful.  Some pins can even evolve and become other pins entirely.  This evolution can be a more powerful version with the same psych (does the same thing), or it can be a completely different psych.

There are different kinds of PP as well; not just battle PP, but also shutdown PP and mingle PP.  Battle PP is gained by fighting off noise, shutdown PP is gained by not playing (you gain PP each day, up to a week's worth), and mingle PP is gained by meeting other players in mingle mode.  Fortunately, there are random computer generated visitors, so mingle PP is not completely impossible if you are alone.  Though if you do have a friend, one really cool thing about mingle mode is that you can buy from your friend any pins they have equipped – even end game ones.  Very handy.  Anyway, each type of PP is needed to evolve certain pins in a certain way.  As is typical with Square Enix games, there is really no way to find out how a pin evolves without trial and error or strategy guides.  But evolving a pin correctly is important if you want to get them all, or if you want the most powerful pin deck as soon as possible.  You can have six pins in your deck at a time, though you do start with less available slots than that.  Some pins can attack, some heal, or offer some other useful effect.  There are also synergy decks where certain pins are more powerful together.  There is a ton of strategy in getting, leveling, and utilizing pins; it's a metagame all in itself. 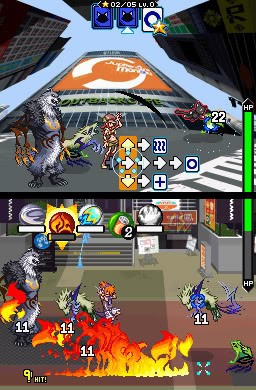 Strong Points: Excellent character development and story; fantastic artwork and style; extensive stylized music; fantastic voice acting where used; frantic, fast-paced combat; extensive collectability of items; very Japanese in style and substance; makes excellent use of the DS hardware – game play would require substantial changes for any other platform (like iOS)
Weak Points: Pretty high learning curve; battles can be quite difficult, especially with certain bosses; watching two screens at once takes practice; voice acting is only used in certain situations, not everywhere; audio quality suffers because of DS hardware and cartridge size limitations
Moral Warnings: Some characters have a bad attitude and treat others badly; many female characters show a lot of skin: many midriffs, with some a bit below the waist and/or cleavage; though not shown wearing them, characters, including male ones, can wear female clothing if they have enough 'bravery', and vice versa; common use of curse words like a*s, b**ch, h*ll, etc; a few crude phrases like 'come back when you grow a pair'

Battling enemies not only gets your pins PP, but your character gains experience as well.  This helps you gain levels, up to 99 of them.  One unique aspect of this is that you can actually set your current level, up to the top level you have earned.  The main reason you would do this is to increase your chances of gaining pin drops.  The larger the split between your maximum level and your current level, the better chance that you will get new pins when an enemy is defeated.  Naturally, the game is more difficult when your level is lower.  You can also choose what difficulty the game is at the moment, and this can change at any time you are not in a battle.  In this case, the harder the difficulty, the better your item drops.  So, these two parameters, difficulty level and character level, helps determine your drops.

In battle, Neku's partner takes care of the top screen.  This character can be controlled by the player, using the D-pad or B/A/X/Y buttons, or by the computer in an auto mode. There are also nice compromise modes you can choose, where the CPU can take over fighting for you if you don't do anything after three seconds.  This is quite handy if the bottom screen is too hectic for you to be able to focus on both at the same time.  This character is really useful, as sometimes they can hurt an enemy that Neku cannot.  Another aspect of strategy with this other character is that they can rack up fusion stars, which can lead to combo attacks.  Here, both characters unleash a very powerful attack on all enemies on the screen, as well as heal you.  Since Neku and his partner share a health bar and enemies, strength on either side can help cover weaknesses, and weakness on either side can be deadly.

Another unique aspect to the world of Shibuya is trends and threads.  As Neku uses pins, he subtly influences what things are trending right now.  Things which are trending give bonuses, and whatever brands are at the bottom have their power cut in half.  Threads is a bit different.  Your characters wear clothing, and each piece has an effect on your powers, some greater than others.  Making the right combination of threads can really help or hinder your performance.  Threads also have a 'bravery' requirement to wear.  Typically, the higher the bravery, the more girly the outfit, which kind of makes sense given that our hero is a guy...  Fortunately, you never see anyone actually wearing these clothes; it just modifies various stats and abilities.

They say you are what you eat; that literally applies here.  You can give each character food to eat, which directly gives that character permanent stat bonuses, such as +attack, +defense, +hit points, or +bravery.  Each fight you can digest a small portion of the food, which, once completely digested, will permanently increase the listed attribute.  You are typically limited on how much you can consume per day. 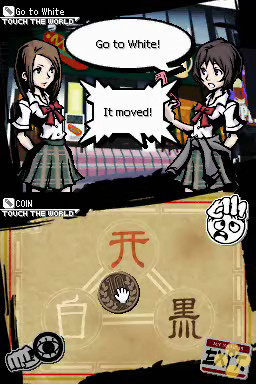 There is also a small mini-game called tin pin slammer, where you take part in a slam-off with one pin against another.  The mechanics are kind of hard to describe, but while it does play a smaller role in the game, certain parts of the game reward good players, and it's a simple head to head multiplayer component if you like.

All of this depth of content exists in a world that is just bursting with personality.  The music is very modern and catchy, though I must lament the audio quality, which could be the fault of the DS hardware, or cartridge limitations. Nevertheless, it's still fabulous.  The voice acting is also excellent.  Not every conversation has voice, but there are plenty of flavor effects, like gasps, screeches, and others that really flesh out each character in fantastic ways.  The graphics are also very nice to look at.  Yes there is some pixelation here and there, but on the whole it's very enjoyable and not hard hard on the eyes.  It's very stylized and oozes character.

There are a lot of great things to say about The World Ends With You.  As a game, it's quite memorable.  But there are quite a few appropriateness issues to contend with. First of all, the main character is a jerk.  Fortunately, his character matures, but it's still something to note.  Also, even in the intro sequence, there is a curse word used.  There are many more used throughout the game.  Most are in just story sequences, which come and go, but in the later half of the game, your partner uses words like 'h*ll' often as battle sayings.  He also has a rather 'colorful' saying 'come back after you grow a pair'.  There is also common use of other curse words like 'b*tch' and 'a*s'.  One non-player character has a blog called 'F Everything'.  Fortunately, the 'F' is left implied.

As bad as the language can be, there is also a clothing issue.  The fact that male characters can benefit from wearing women's clothing is one thing (though they don't wear them onscreen).  Another is that female characters tend not to be very modest.  Midriffs, well down into the pelvic area, are exposed on some characters. Your character can read the thoughts of people around them.  There is also a (*spoiler alert!*) rather unchristian view of the afterlife.  The 'players' are dead souls in a 'reaper's game' and can be permanently erased (annihilated) or brought back to life based on their performance.  It's definitely an interesting plot mechanic, but not for the spiritually immature.

And that's probably my whole view of this game: it has some fabulous ideas, and is a ton of fun, and something truly unique, but it's not for the immature.  There are not only unchristian ideas, but foul language and a lack of clothing for the women. It's all a bit of a shame, really, though I can honestly say it's reasonably consistent with the postmodern view of the world and pop culture this game portrays.  As a gamer, I recommend it wholeheartedly as a modern day classic.  As a Christian, I recommend you take much more caution.  And please, do not give this game to children.