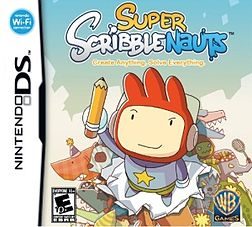 Super Scirbblenauts is the follow-up to the ground-breaking game Scribblenauts, which relies on your imagination to complete each level.  You can use the stylus to write or type objects into existence to help you solve various riddles.   Most levels have various solutions with multiple endings.  How many can you come up with?

There are several areas, called constellations, each of which consists of different levels. The goal of each level is to collect the star, or "Starite". Occasionally the Starite is behind a gate or dangling from a thread surrounded by explosive barrels. In some instances, the Starite only appears after certain conditions have been met. Solving the puzzles can unlock merits (achievements) and earn Ollars (money) to buy new looks for the main character, Maxwell. To see the ending credits, you'll need to complete 10 of the constellations. There are a couple of bonus constellations and a total of 121 stars. More hidden levels can be unlocked as well, if you can figure out where to look.

The levels have various themes and some of them pay tribute to popular video games like Super Mario Brothers and movies like Terminator and The Wizard of Oz.  One new addition to this series is the ability to use adjectives.  Subsequently, there are adjective-based levels that force you to use them.  Some levels have an equation that has to be completed by using descriptive objects.  For example, you may have a baby in the left box and an old man on the right box and you’ll have to put an adult male in the middle box to solve the puzzle. 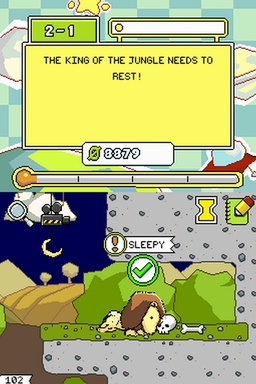 Strong Points: Improved controls make this game much more enjoyable than the first.  The built-in hint system is helpful.
Weak Points: Not as challenging as the original game.
Moral Warnings: Players can choose violent solutions to problems; there are some undead references.

The massive dictionary still impresses me.  There’s a lot of room for creativity but many of my solutions involved wings and some rope.  I’ve also used behemoths, krakens, dragons, knights, tyrannosaurus rex (t rex works) and even God (who can die in this game).  Some of my more creative solutions included a tractor beam, black holes (ends in death) and indestructible (I love the new adjective feature) bridges.

Since this is a family friendly game there are some understandably missing items.  Alcoholic beverages and brand names are not available.  Other crude terms are missing as well.  While you can kill in this game, it’s in a cartoon like manner and there is no blood.  You get merits for not killing in this game and some levels actually forbid it.  Even without killing, there are several Halloween themed characters in the game including zombies and witches. I still let my kids play Super Scribblenauts since it really encourages them to think and use their imagination.

While the difficulty has been ratcheted down a bit, some of the puzzles still eluded me.  There’s a new hint feature where you can buy clues for Ollars.  The longer you wait, the cheaper the hints become.  Even with those, I still had to look on the Internet for a couple of them. 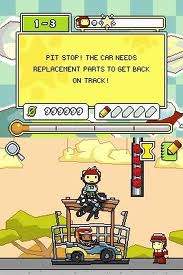 One of the biggest improvements  in my opinions is the overhauled control system.  You can now control Maxwell with the D-pad instead of the stylus which resulted in many accidental deaths in the original game.  The stylus is used for scrolling through the level and interacting with objects while the D-pad moves him.  My only complaint with the controls is that it’s hard to detach a rope from Maxwell at times.

With less frustration, I found Super Scribblenauts to be a much more enjoyable gaming experience than its predecessor.  For $20 or less, it’s worth it.  Even after you beat the game, you can create your own levels and send them to friends using the Nintendo wi-fi or friend system.   I look forward to checking out the latest Scribblenauts Unlimited game on my PC, 3DS, or Wii U.