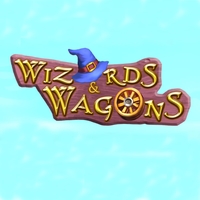 Thank you Touch Dimensions for sending us this game to review!

After defeating the evil demon lord, the local hero has restored peace to the land.  By doing so he/she is now unemployed and lost their house.  So much for a typical “and they lived happily ever after” ending right? All is not lost though, if the hero can raise $30,000, they can buy back their house.  The local mage has given the nameless hero a wagon to use to trade back and forth and earn gold to redeem their home.

Each town has goods that they produce on a regular basis though occasionally there are shortages that raise the prices.  On the flipside there are also festivals and special events where you can purchase products for lower than normal cost.  The demand for items changes frequently and quickly go away if a merchant such as yourself overstocks them.  In other words, if you see that a town next door is demanding an item produced by their neighbor, take advantage of it, but don’t expect the demand to last very long!

Buying a bunch of stuff and selling it between towns doesn’t sound very challenging, but there are a few gotchas.  The first is that your starter wagon does not have much attack/defense power or space.  In order to fix those problems, you’ll have to raise money which you don’t have a lot to start off with.  You’re broke and homeless remember? 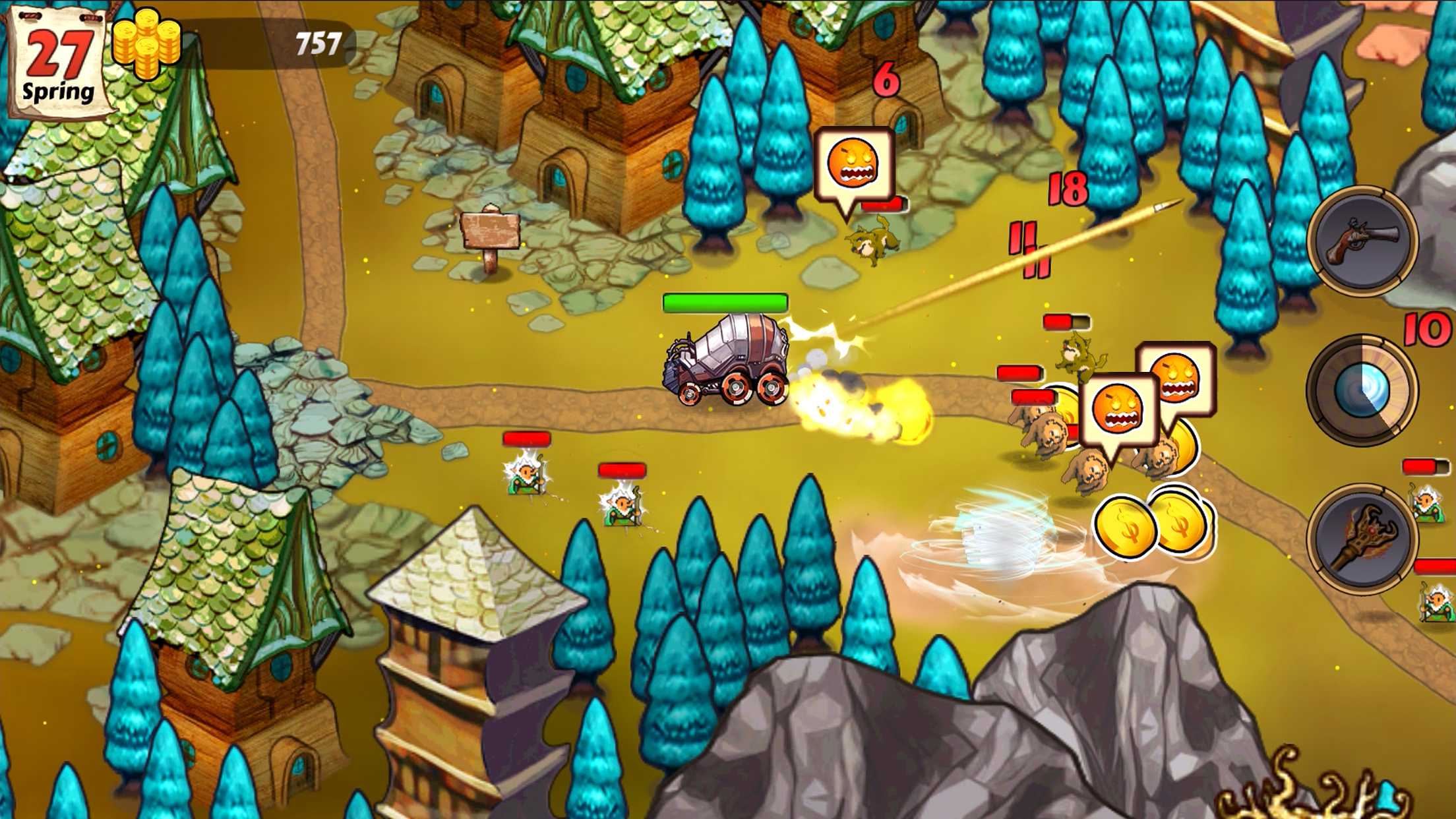 Strong Points: Cute game that can be used to teach kids about supply and demand
Weak Points: Game slowed down and stuttered on my tablet occasionally
Moral Warnings: Cartoon violence; magic use; the ability to sell alcohol

Travelling between towns takes days and your wagon will get attacked and ambushed by various monsters along the way.  The wagon drives automatically along the path, but it’s up to you to tap on the enemies to fire your arrows at them.  Some towns have companions that can accompany you and help fend off enemies for you.  The companion I had wasn’t very strong and often died.  Fortunately, he was resurrected and fully healed when I arrived at the town.  The wagon on the other hand often needed costly repairs at the blacksmith.

In town you can visit the blacksmith for repairs as well as weapon and wagon upgrades.  Some of the weapons are consumable and others attack automatically.  Definitely invest in the latter!  Other worthwhile upgrades include better armor and an increased vision radius to spot enemies sooner.  There are various wagons with different compartment configurations for storing inventory and weapons/accessories.  Weapons and accessories can only go in specific slots and stocking inventory requires arranging things Tetris style to make them all fit.

Most of your time in town will be spent at the merchant where you can buy and sell your goods.  The selling screen will let you know how much of a profit or loss you will be taking.  Talking to people in town is a good way to pick up on rumors about the demands and price drops some towns are experiencing.  Some townsfolk will even offer you quests for delivering items or defeating a certain number of a particular enemy type.  Even more quests can be found at The Guild which is in every town.  As you increase your relationship with the guild they will offer you better loan rates and let you take on more concurrent quests.  Some quests have to be completed within a certain time frame so you’ll have to take that into consideration before accepting it.  Another thing to make sure ahead of time is that your wagon is big enough to carry the items they will sometimes ask you to deliver.  Fortunately, canceling a task easy to do, though I’m not sure how much of a relationship penalty you get for doing so. 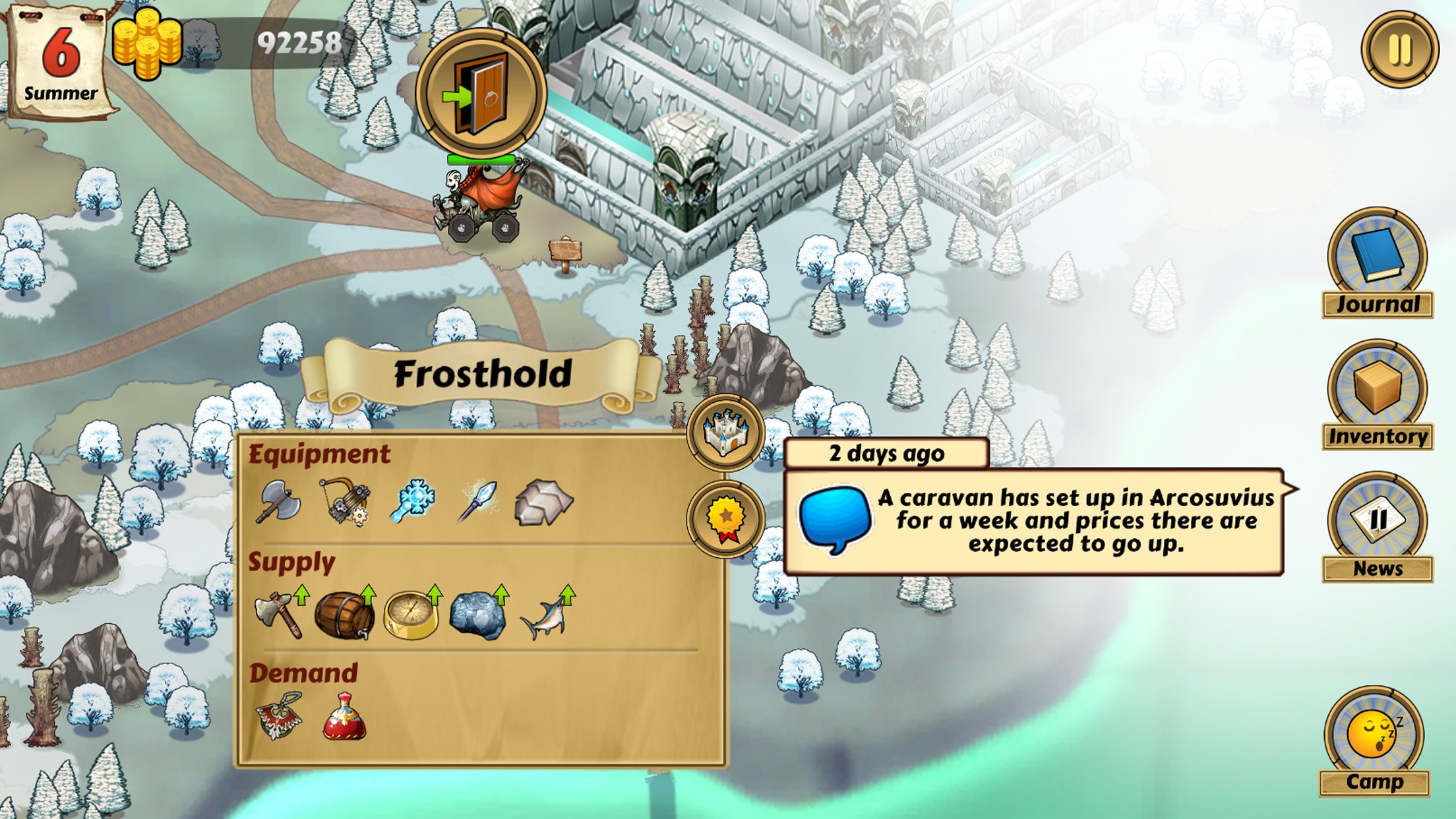 Between the quests and saving up to buy your home back, there is plenty to do.  While there is no time limit on buying back your house, you will be shown a yearly summary of how you did financially.  Hopefully you’re turning a profit!

Wizards and Wagons is a cute game that can teach kids about supply and demand.  My son watched me playing it and wanted to try it.  It’s kid safe but has some cartoon violence (shooting enemies with arrows), magic use, and alcohol is available as a tradeable item.

Given the game’s interface and tapping battle system, I recommend playing this game on a tablet over a phone.  I was surprised that my LG Tablet stuttered while playing this game.  It usually happened when enemies appeared.  Other than the occasional performance hit, Wizards and Wagons ran fine.

The asking price is a reasonable $4.99 and there are no in-app purchases whatsoever.  Though the game will prompt for you to rate it.  I had fun playing this game and recommend it for players of all ages.  It’s pretty well polished in the graphic and sound department, but I hope it gets better optimized to handle the enemy spawning.  The developers have been actively patching it so hopefully it gets remedied soon.