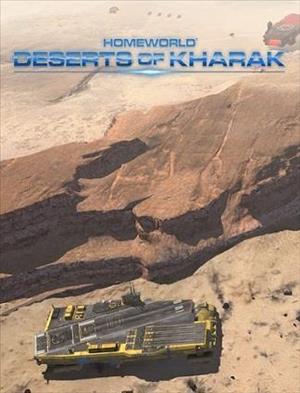 Thank you Blackbird Interactive for sending us this game to review!

The planet of Kharak has been slowly dying.  Each passing generation sees the desert expand and the water diminish.  The S'Jet clan has discovered an anomaly, located deep in the desert, that may prove to be the salvation for their planet.  So the S'Jet clan constructs the carrier Kapisi, a mobile military production facility.  With this they hope to traverse the desert and retrieve the anomaly, unlocking its secrets and harnessing its power, thereby saving their planet.  But they have an enemy besides the desert to contend with.  The religiously fanatic Gaalsien roam the deep desert.  They believe that it is the will of their god Sajuuk that the desert claims the planet.  The artifacts of the desert belong to them, and they are not inclined to share them with heathens.  To reach the primary anomaly, the Kapisi must defeat both the Gaalsien and the Deserts of Kharak.

Homeworld: Deserts of Kharak is a real-time strategy game.  It is a prequel to the original Homeworld and Homeworld 2 by Sierra.  In game terms it feels very different than its predecessors.  Most notably, this game takes place within the atmosphere of a planet, rather than the void of space.  As a result, the true 3D experience of Homeworld is missing from Deserts of Kharak.  This game feels much more like a traditional RTS than Homeworld did.

One of the things I enjoyed about Deserts of Kharak was the story.  As a fan of the original Homeworld, it was interesting to see the prehistory unfold in this game.  I also appreciated how they made the carrier Kapisi useful for more than simple production of the militarized units.  In Homeworld, the carriers and Motherships that build units are simply mobile factories.  They have difficulty defeating even the simplest enemy unit if caught by themselves.  Throughout the course of Deserts of Kharak, you can eventually improve the Kapisi to the point where it can handily defeat a large strike force by itself.  This frees up your other military units to actually be effective instead of being babysitters to their production equipment.  They implement this with a simple power management system, where you can shunt power to armor, repair, weapons, and weapon range.  This grants a good deal of versatility to the Kapisi and enables it to be a force to be reckoned with in its own right. 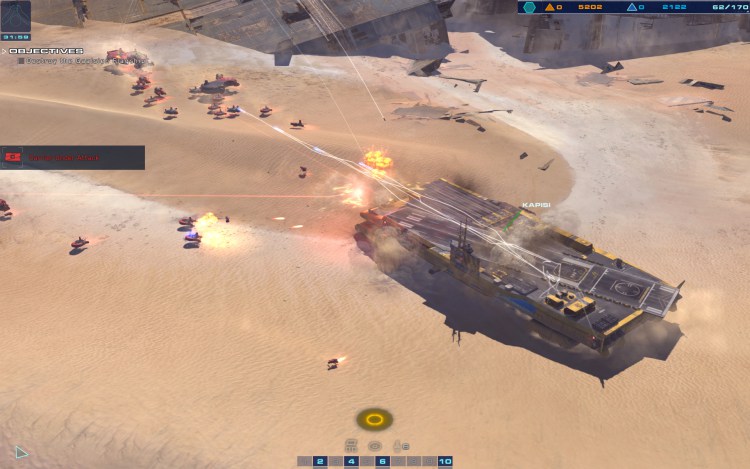 Despite these enjoyable aspects, the game does suffer from the same issues that I've encountered in nearly every RTS game I've ever played.  I touched on this in my review of Dungeons 2 as well.  I have always felt short-changed in the campaigns of most RTS games since the best units are only available at the very end of the campaign.  In the case of Deserts of Kharak, this is undeniably the case as well.  The campaign is short, 13 missions.  All told, you have about 14 different units at your disposal and you start with 4 of them.  That means that over the course of 12 missions you slowly accrue the ability to produce 10 additional unit types, and this leaves 2 missions where you have access to your entire arsenal.  As an aside, I would much prefer it if the RTS development community would someday recognize this flaw in their general thinking and change the way they design games so that the post-full-arsenal gameplay time was at least as long as the build-up to get there.  But I digress (and likely hope in vain.)

The shortness of the campaign (it took me all of 16 hours to complete it) really is one of the biggest weaknesses of Deserts of Kharak, especially for a price tag of $50.  When I spend $50 on a game I usually expect to receive more than 24 hours worth of enjoyment out of it.  Another glaring weakness is the AI.  The AI in Deserts of Kharak is simply inept.  It is everything a human player of any skill tries not to be: predictable, overly and consistently aggressive, and repetitive.  When playing online against the AI, my friend and I are able to handle more than twice our number of Hard AI enemies almost without worry.  How, you ask?  Because the AI is just that bad.

As for stability and ease of use, I found Deserts of Kharak to be a fairly good experience.  The game crashed once, and it may have been my Windows OS's fault.  The controls felt like any other RTS game and there really isn't much different about how the game played that I had to learn, aside from the various hot buttons.

The graphics were good, but not exceptional.  The vehicles and environments were well rendered and detailed, even close up (which is honestly impractical in any RTS).  Nothing ever caught my eye in the game as remarkable or overly well-done.  Nor were there any glaring weaknesses that I could discern except that there is little in the way of visual combat damage or wear and tear on either the Kapisi or the other vehicles in your fleet.  I think the game could have integrated something of that nature and would have benefitted from it visually. 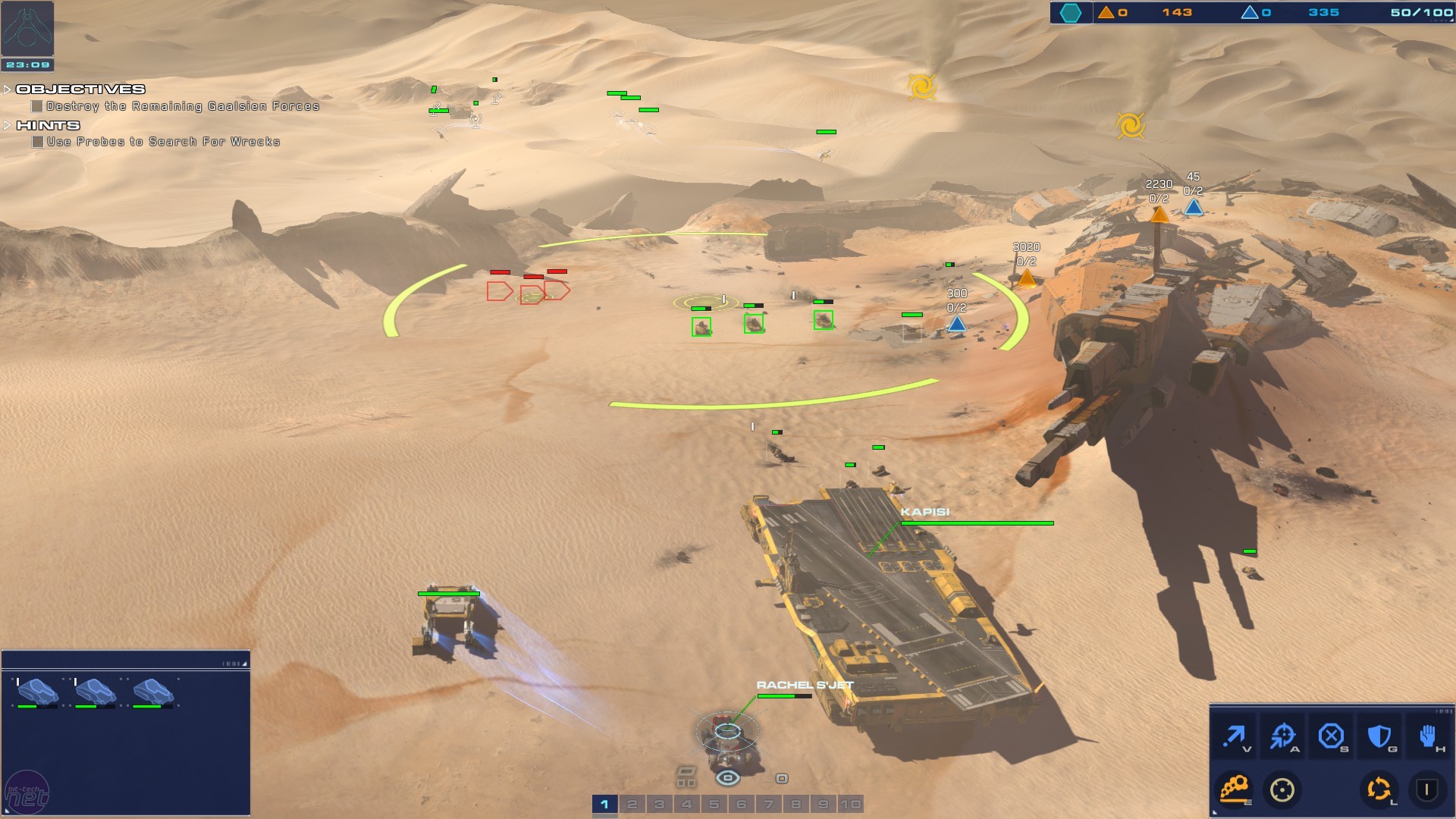 The soundtrack was very reminiscent of the game's spiritual predecessor: Homeworld.  There are a lot of low digitized bass tones, which illicit feelings of sadness or loss.  In Homeworld, this felt more appropriate than in this game.  In Deserts of Kharak, the focus is not on loss, but on finding something that was previously lost.  A more hopeful or upbeat soundtrack may have contributed to this more than the homage to Homeworld.  That's not to say that the soundtrack was bad, just that it felt like it detracted from the story in my opinion.  Most of the voices are private recordings or at-war combat communiques, and all are dubbed with radio static or distortion, which was a touch that I liked.

As far as points of morality are concerned, there was one use of OMG near the end, and one or two uses of H*ll throughout.  This is also a game that revolves around warfare combat and the destruction of opposing military vehicles.  There is no blood, gore, or even the sound of human suffering involved in the combat experience. It could even be assumed that, aside from the carriers and Rachel S'Jet's baserunner, the rest of the ships are unmanned or drone controlled.

The developers recently released a DLC for this game called "Soban Fleet Pack" which adds a playable Coalition faction to the multiplayer side of the game.  The Soban are essentially a reskinned S'Jet faction with a few tweaks as to how their vehicles perform.  Specifically the special abilities they possess are different and their vehicles do have a slightly different look to them.  The DLC price tag for this faction is $6.99.  Based on the initial price point, this is probably reasonable.  But I still think that its a little pricey for what you get.  There was no discernible improvement in the AI included with this DLC.

All that said, I think that Homeworld: Deserts of Kharak is a nice spiritual successor to Homeworld and Homeworld 2 that suffers from too little content at too high a price.  The AI likely will be fixed in the future (I hope) and they likely will try to add even more content for additional dollars.  It is ultimately a game for fans of Homeworld and the history and lore behind that landmark game, but probably too high a price to pay for gamers who enjoy a nice long RTS campaign or who are simply casual fans of RTS games in general.