Thank you Ratrod Studio for sending us an evaluation copy of this game!

Ratrod Studio has released a few Drift Mania games.  Their current 3D offering, Street Outlaws, offers twelve racing tracks to master that span across the globe.   You can drive your fully customizable car through the cities of Japan, steep San Francisco hills, the desert canyons, and the Swiss Alps.  There are several game modes to try including Career, Battle and Multiplayer.  To get started, I highly recommend beginning with the practice tutorial.

The practice mode will teach you how to do basic maneuvers and how to drift which is the name of the game (pun intended).  The controls are pretty straightforward and you steer your car by tilting your tablet or phone.  There are acceleration and brake controls on the sides of your screen.  The brake comes in handy for drifting as well as stopping your car. 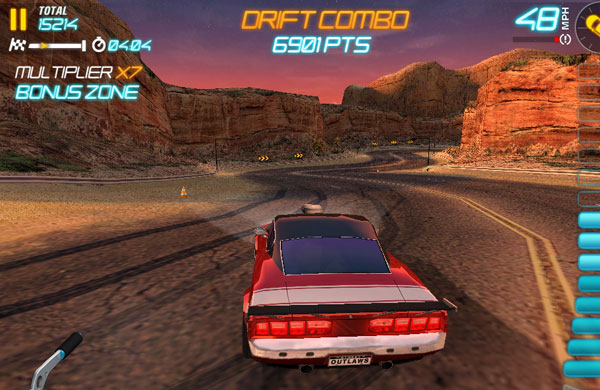 Besides winning the race, you want to accumulate as many points as possible.  You can earn lots of points by drifting in style and in designated areas.  The faster you're going when you drift adds a significant bonus as well.   You can lose points in this game by going off the track, or in the wrong direction, and by damaging your car or other objects.

No matter how many times you hit things, your car still looks the same.  At the end of the race, the damage taken is shown in a percentage rating.     There are many familiar looking cars to purchase but their manufacturer names have been changed.  The cars themselves look good, but when zoomed in appear pixilated.  The backdrops add variety, but not much detail.    All of the places are vacant and there are not many other cars on the road.  There just aren't any signs of life other than the occasional tree.

The battle mode has you racing against an on-screen opponent.  Participating in events can earn you money for upgrades and new cars.  As you progress in the career mode, you'll unlock new racing tracks. New vehicles and upgrades are purchased in the game's store. You can earn your in-game money through racing or buy it outright with real currency.  The game starts you with 5,000 in-game money but the nicer cars are 20-40K each. 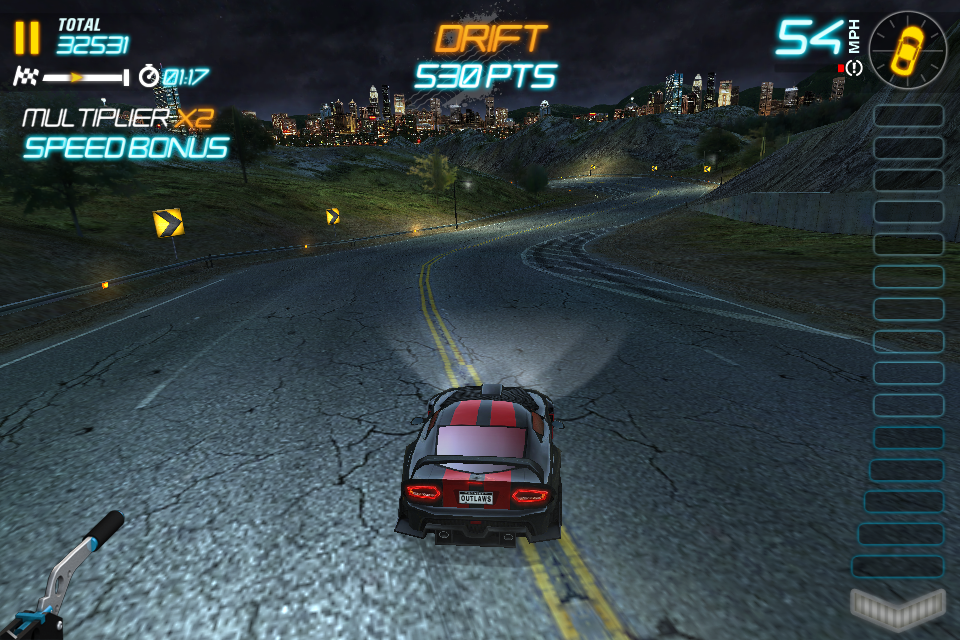 You can do one on one races in the battle or multiplayer modes.  The objective is to win the race and not damage anyone's car.  (darn!)  Sadly, I was not able to find anyone to play against online.  I do like how Twitter and Facebook integration enables you to boast about your mad drifting skills.

Other typical game customizations apply like the ability to switch difficulties (easy, medium, hard) or adjust the music, crowd, and engine volumes.  The game's website mentions the ability to listen to your own music library, but I did not see that option in the limited game version I was sent to review. It's a shame since some of rap lyrics on the title menu song have some swearing.

Overall this is a fun drifting/racing game for the small entry fee of $1.  It's a shame that it has micro-transactions that can cost up to $50 and with the swearing I cannot recommend this game for children to play.  Another bummer is that there are not many people to play against online.  If you enjoy playing solo, it's still worth looking into.