Thank you SEGA for sending us a review code!

I’ve been enjoying the Yakuza games since they arrived on the PS3 and I’ve been amazed at how they pushed the limits of the hardware in terms of graphics. Yakuza: Like a Dragon is available on the Xbox One and is optimized for the Series S/X. Though I wasn’t blown away by the visuals this time around, I was caught off-guard by the English voice acting and enjoyed the turn-based fighting mechanics. As I’m getting older, I’ve had to take some breaks during tough boss battles to give my hands a break in the previous Yakuza games. My hands were perfectly fine in my forty-four hour playthrough of this title.

Though this game has a new protagonist and cast of characters, there are cameos from people in the previous titles that improve the experience if you’re familiar with them. The main character is Ichiban Kasuga who has been a loyal yakuza since he was a teenager. Ichiban has tremendous respect for his clan leader, Masumi Arakawa, and happily served eighteen years in prison when asked to do so by him. Upon his release, Ichiban doesn’t find any yakuza members waiting to greet him. Only a former cop named Adachi.

Adachi brings Ichiban up to speed about the downfall of the Tojo Clan and the rise of the Omi Alliance and the role his former clan leader played in all of it. Ichiban doesn’t believe a word of it and sets out to gain an audience from Arakawa himself. When that meeting does happen, it takes an unexpected turn and Ichiban awakens in a homeless camp in Ijincho.

Having nothing but the clothes he’s wearing, Ichiban must scrounge around for food and money to earn his keep and respect of the homeless people who took him in. Money can be earned by looking for loose change by vending machines, completing side quests and part-time hero requests, winning battles from thugs attacking you on the streets, assisting a company as their president, and selling unneeded items at a pawnshop.

Strong Points: Great story and cast of characters; English voice acting is well done but takes some getting used to; turn-based combat system is easier on my aging hands; lots of fun mini-games
Weak Points: Some grinding is required; plan for a three hour ending sequence without the ability to save in between final boss battles
Moral Warnings: Gruesome violence as you’ll see characters getting shot, stabbed, and dismembered; blood is shown during fighting and movie scenes; Every curse word possible is uttered as well as blaspheming; drinking and drunkenness is shown; gambling is possible; prostitution is a big part of the main story; some characters cast curses and hexes; transvestite character

Completing side quests are optional, but totally worth it as they often yield good items and money. In addition to that, the people you help can be hired for the company Ichiban runs or assist in battle in the Pound Mates app. Pound Mates can assist in battles and each helper’s first time use is free of charge. After that the cost goes up and there’s a cool down period before you can request their assistance again.

Ichiban is rarely alone as he makes new friends who join his cause in preventing an all out war between the three factions ruling Ijincho. Up to three additional people can be in the party at a time and like Final Fantasy 3 and 5, you can change jobs and learn new abilities. Each job type has unique offensive, defensive, and healing abilities along with weapon requirements. My party consisted of a card dealer, an idol, a breakdancer, a chef, an enforcer (riot/SWAT style policeman), and I left Ichiban as a hero. Ichiban strives to be a hero like those in his favorite video game series, Dragon Warrior.

There are several nods to various videogames with the minigames and side quests. Dragon Kart pays homage to kart games and is fun to play. A new addition to this title is the Pokemon inspired Sukimon index where Ichiban assists a professor in categorizing the various enemies he defeats. Like previous Yakuza games you can play some classic Sega games at the arcades. There are other minigames like Karaoke available as well if you’re into that.

Crafting is a part of this title and if you collect enough materials and are able to cover the forging costs, you can create some powerful weapons and armor for your party. You can also begin a romantic relationship with the forge shop owner if you can plant and harvest enough pine trees to give her a bonsai tree.

There is no shortage of things to do in this game, and like the others, it tells a dark but exceptionally written story. It begins with a flashback of Masumi Arakawa’s teenage years as a traveling performer. The scar on his face came from his abusive mother who was openly having an affair with another actor. He then witnesses his father’s murder at a restaurant. Blood and violence are prevalent throughout this game. 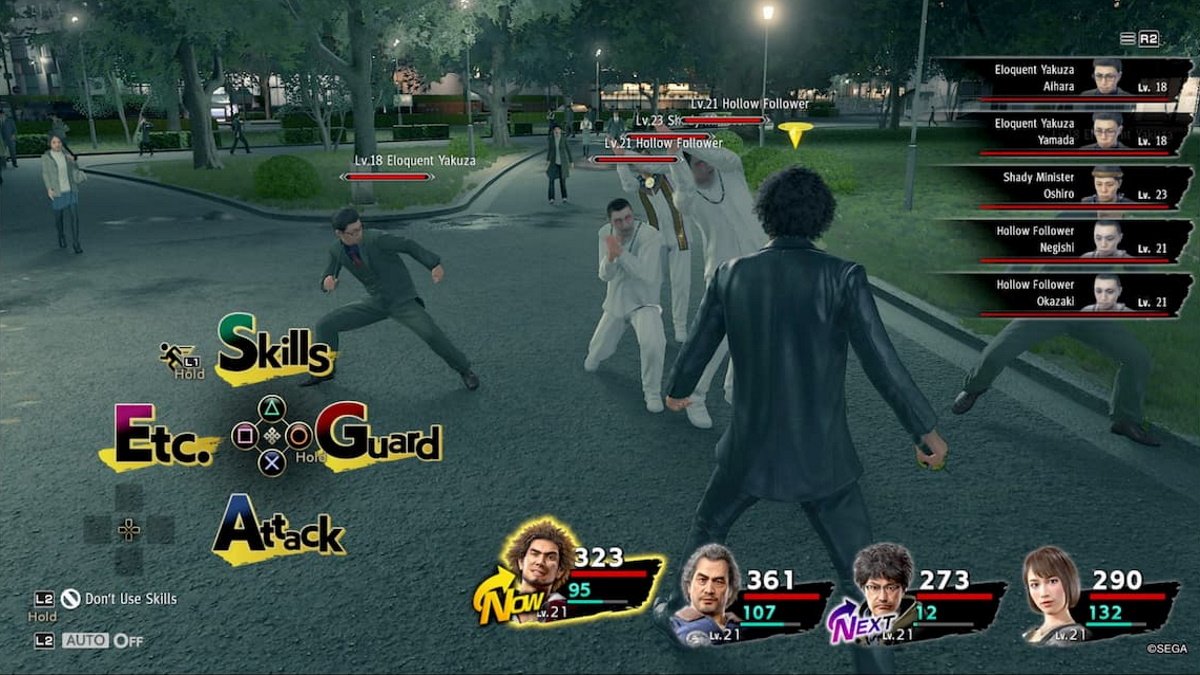 The violence is pretty gory with bleeding gunshot and stabbing wounds. Dishonored yakuza members lose their fingers and one gets their eyes pushed into their skull and killed (I had to look away during that scene). Prostitution plays a significant role in the story as Ichiban was born in a brothel. Part of the main story also requires helping a madam secure her place of employment in exchange for providing a place to live for Ichiban and his friends. Revealing outfits and posters are shown and one guy in a side quest needs assistance buying clothes as he’s only wearing strategically placed bubbles.

Foul language is rampant in this title with every curse word possible uttered on a regular basis. Blaspheming happens pretty consistently too. Some characters in side quests and enemies you’ll be fighting will use hexes and curses.

Your party can relax and kickback in a couple of bars. One of the bars you’ll be visiting has a transvestite bartender. In order to get to know your party members and strengthen your bonds with them you’ll have to drink alongside them. Some characters will get noticeably drunk in the process.

Yakuza: Like a Dragon is a very mature game and should not be played within viewing range or earshot of young children. If you don’t mind the mature content, the storytelling is excellent and this title is probably my favorite in the series. The English voice acting was an unexpected surprise though they didn’t get Kiryu’s voice matched to the gruff Japanse actor’s. Some minor gripes aside, this title should be played by fans of the series. I was doubtful of the turn-based battle system, but I really enjoyed it and am glad they took the risk in implementing it.