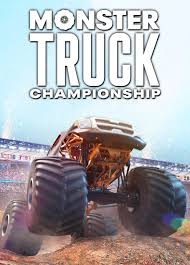 Thank you Nacon for sending us this game to review!

Monster truck competitions are a uniquely American sport - the trucks were invented here, and are only a bit over forty years old! Making vehicles large enough to crush other cars is something that just makes sense to the American mindset, and is certainly celebrated in this game, Monster Truck Championship. (And doubly so in the Patriot Pack DLC, where you can get an American flag for the side of your monster truck.)

While it may be a relatively young sport, it certainly has no shortage of fans. Ever since monster trucks have been on television in the early 1980s, millions have watched as huge towering machines of metal and rubber have driven over seemingly tiny 'normal' vehicles, not to mention the many various stunts that they can perform, like jumps and flips. They also participate in races, because why not - massive vehicles with huge tires track really well off road, after all.

Many racing games of the modern era tend towards the simulation side of the spectrum these days, as the major racing game developers have been perfecting their craft, and Monster Truck Championship is no exception. The physics are very realistic (at least it seems that way - I can't say I've driven a monster truck before!) and the graphics look fantastic and well optimized. On Xbox Series X, it looks super smooth, and it supports 120Hz on supported displays, as well as 4K resolution. Considering how well the PC version is optimized, seeing the Xbox Series X version run well doesn’t surprise me at all. It supports racing wheels, though my current ones don’t support Xbox. A control quirk that carried over from the PC version is that it doesn't recognize it if you are already in a gear when the race starts if you set it to manual clutch - you may need to shift right away after the game says 'Go', unless you use sequential clutch (or use an automatic transmission).

When you start the game for the first time, you can either go straight into career mode, check out quick play, or go through Training. I highly recommend the training, because it's where you learn how to perform various tricks - though that really only applies to two of the games modes: Freestyle, and Destruction.

Strong Points: One of very few monster truck simulations; very realistic physics; looks great, with excellent performance also; accessible, yet with a high skill ceiling
Weak Points: Not very many levels
Moral Warnings: The word 'h*ll' used on an optional decal, another with a devil on it, and yet another decal featuring a cigarette; vehicular violence

When you first start your career mode, you may find yourself driving a Race for the first time, which the tutorial doesn't really prepare you for. A Race is pretty much what you expect - you drive your truck as fast as you can against seven other opponents, trying to get first place. While you absolutely can crash into other cars and damage them, it's unlikely to grant you the win this way - crashing is a lot slower than driving, and the AI knows this, too. Most courses require three laps around, after which the winners and losers are decided. The first through eighth to cross the finish line are scored appropriately for the event. Unfortunately, stunts really don't help much in this mode. After going through the training, this was quite a shock - and you can see how long it took me to start doing well in my PC version livestream recording above.

After your first Race, there is another mode also about getting to the end quickly, and that's a Drag Race. Rather than going as fast as you can in a straight line like you might find at a drag strip, these are short dirt courses where you try to get from the beginning to the end as quickly as possible. These typically last less than thirty seconds each, and usually are a one-on-one tiered event where each winner plays the winner of another contest to find out your place. If you win three in a row, you win first place in that event. Like the Race, stunts are not generally helpful for winning, but rather traction and speed matter more.

Unlike Race and Drag Race, Freestyle and Destruction (which are extremely similar) are all about racking up points. These modes 'feel' more like what a monster truck game should be all about - breaking stuff. Freestyle has more ramps in those maps for death-defying stunts, while Destruction has more cars and obstacles to crunch beneath your wheels, but otherwise they are functionally identical. Your goal here is basically to put what you learned in Training to good use - rack up as many points as possible. As you chain tricks and smashes together, you gain multipliers that can lead to some huge bonus points. A perfectly executed high jump > forward flip > barrel roll > bicycle > smashing > whatever else you can come up with can lead to enough points to put you on top in just a short amount of time, leaving you with the rest to just mess around. Or, you could be fighting the scoreboard trying to land that perfect combo, and come in last. Either way, this is what most of us think of when we think of monster trucks, and it's a blast. The only bummer is that they really should add a free play mode where you can just mess around as long as you want - the closest we get to that is honestly the Training level, which is a bit of a hidden gem, as there is a ton of stuff to mess around with in there. 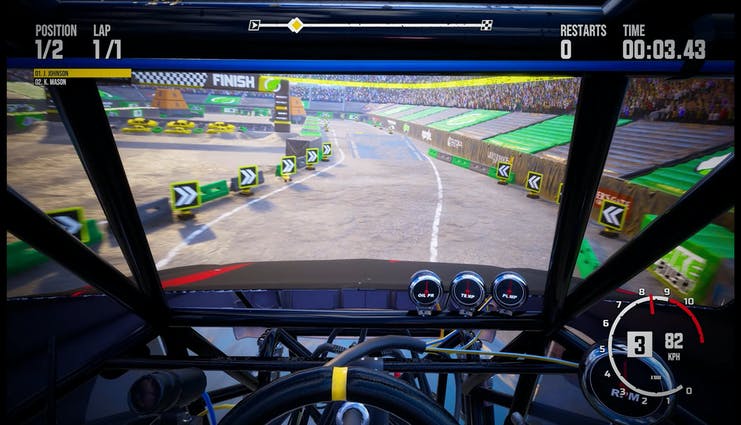 In career mode, which is the main single player offering, you have team management, where you can hire members that offer various bonuses, and choose sponsors, who can grant you various rewards for performing difficult challenges. There is also a garage, where you can upgrade your performance if you have unlocked the parts to do so, or spend your earned money on cosmetic upgrades. There's actually quite a bit here; one thing that I found extremely helpful, especially as a new driver, was a tip I saw on the Steam forums for this game: taking advantage of the stunt and racing setup tunes. For racing, you want the truck suspension lower to the ground, so that you can get better traction - rolling over is bad. For stunt mode, you want it higher up - rolling over can be good! You can also adjust stiffness, damping, gear ratio, and torque distribution. These tweaks can make a massive difference in your success on the track, especially while racing. Figuring these things out makes driving way easier, as I was losing traction constantly while trying to keep a good place. I even found myself tweaking the gear ratios per track - some, with tighter turns, benefit much more from shorter gears, whereas tracks with longer straightaways do well with longer ones, as you have a higher top speed. It was all of this and more that reminded me how much of a simulation this game tries to be.

I have to say, driving around in a huge monster truck, with engines blaring around you, and watching your vehicle bounce around is a ton of fun. While with more serious racers I greatly prefer cockpit or hood view, for this one, I want to see that truck flip, so rear view it is. Sadly, the track variety leaves a bit to be desired. There are only seven Race tracks, seven Drag Races, eight Freestyles, and four Destruction tracks. And one of those is actually from the DLC - out of the box, there are only a total of twenty-five tracks. (I am assuming the DLC will be the same as the PC version; my Xbox review code didn’t include DLC.) Each track is very well done; they look great, are well balanced, are complex - they sometimes have forks in the road, and so on. And yet, after several hours of playing, I found myself hoping for more variety - I've played most of what the game has to offer, even if I'm having a tough time against the AI. That said, what's here is really great.

Thankfully, monster trucks as a whole are a fairly messy affair - but morally clean. Crashing into other things breaks stuff, but most three-year-olds do that, whether we like it or not. One of the DLC packs includes a sticker of a guy with a cigarette in his mouth, and another unlockable sticker has 'h*ll' on it. And another one has a devil with horns on it. There's not a whole lot to complain about, especially since you can choose to use other stickers instead.

Monster Truck Championship fills a rather unique niche in games these days. The number of monster truck games out there right now is actually far fewer than you might expect. Thankfully, this one is quite fun to play, and even has a serious side, with race modes that can challenge even the skilled. I played with both a gamepad and my G27 racing wheel on PC, and using a gamepad on Xbox Series X. I did have to remap my clutch to a different button if I remember correctly, since I prefer it on the left bumper. This Xbox version runs just as well as on PC, unless your screen goes over 120Hz. Either way it is a great experience and I’d be perfectly happy with either. Despite a regrettable lack of levels, I've really enjoyed playing this game. If you're looking for a monster truck simulator, Monster Truck Championship is an easy recommendation.