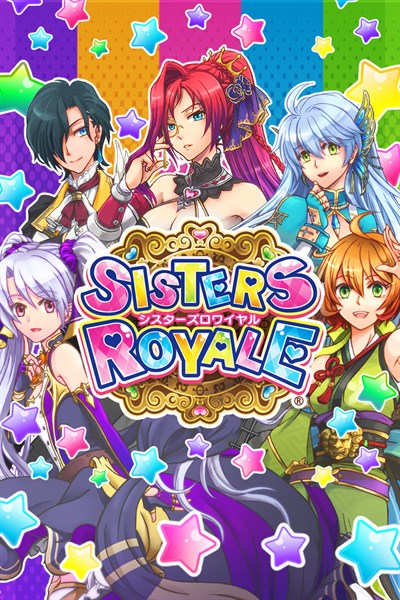 Thank you Chorus Worldwide Games for sending us a review code!

In the world of Putlima there’s a legend of five sisters destined to defeat Seytan. Each of the five sisters are powerful in their own way and if they worked together, they could certainly fulfil this prophecy. However, the five sisters don’t get along and don’t have anything in common except for them all falling in love with the same guy, an angel named Yashin.

Yashin has no idea who these girls are and doesn’t realize how badly they want to marry him. They’re willing to conquer their self-conscience and their siblings shoot 'em up style to show their determination and love for him. In total, there are six characters to play as. The five sisters from oldest to youngest are Sonay, Selma, Ece, Nur, and Lale. Ode is an additional character that's also a witch who believes that she needs to intervene to defeat Seytan.

Each sister has a unique bullet pattern and an elemental affinity. They all have their own level that is themed on their elemental strength. For example, Selma has an ice attack and her cold world has frozen spots on the ground that make it difficult to maneuver around. Lale is a dark witch, her world is shadowy, and you have to illuminate torches if you want to see everything.

The levels follow the same formula and each playthrough takes close to thirty minutes to complete. The sisters have two attack modes but you’ll have to constantly spray out bullets to keep the enemies in check so they don’t overwhelm you with their attacks. If it gets too intense, you can use a bomb to clear the screen of all the bullets coming your way. The bombs come in limited supply, but if you die, you’ll respawn with three of them. Your character has three health bars and when they lose one, they’ll get a bomb added to their arsenal. There’s no limit to how many times you can respawn, but it does count against your final game score.

As you defeat enemies, they’ll drop coins that you’ll want to collect. When you lose a life, you’ll drop some of your coins and you’ll want to re-collect them if possible. The more coins you end a level with, the more points you’ll get. Another way to boost your score is to rack up your attack multiplier to 8X. Halfway through each level is a mid-boss that is optional to defeat. You have a limited amount of time to finish them off before they wander off the screen. The final boss gives you ninety seconds to defeat them. However, if you die that counter gets reset.

Since each playthrough is short, it’s worth exploring every route. Each sister has a different dilemma on how to pursue a relationship with Yashin. Sonay, the oldest, is in her 30s and her sisters tease that she’s getting too old to be married. Lale on the other hand is trying to find out from her sisters how dating works. Out of all of the routes, Ece’s was my favorite with her over-dramatic dialogue. For an added challenge, you can increase the difficulty which adds more health bars to the mini and final bosses. The visuals are quite colorful and the characters are nicely detailed and animated. The sisters can use more conservative clothing in my opinion. Many of them are well-endowed and like to flaunt their assets.

The sound effects and background music are fitting and get the job done. There is no voice acting, but the dialogue is funny with the sisters bickering and calling each other names. I did see one curse word (d*mned) in the dialogue.

If you like shoot ‘em ups, Sisters Royale: Five Sisters Under will entertain you for a couple of hours. The unlimited continues make this game easily beatable. Along with adjusting the difficulty, you may get some more replay value by tweaking the game mechanics. There are some customizations you can do in the Maniac Options menu like increasing the bullet size, speed, and range. With the short and repetitive gameplay, I would hold off on a sale before picking this game up.