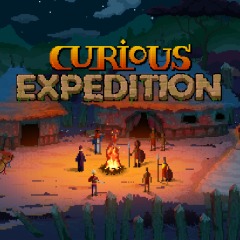 Thank you Thunderful Games for sending us a review code!

Curious Expedition is the debut title from Maschinen-Mensch which released as a very positively rated Early Access game on Steam in 2015 and fully released a year later. The sequel is currently in Early Access with mostly positive reviews. Console gamers can now enjoy the first entry of this series, though there's no word on if the sequel will be available as well.

The premise is simple: you must survive in randomly generated expeditions and try to make it to the golden pyramid to increase your fame. Naturally, there are some gotchas to make this game tough as nails. The map slowly reveals itself as you explore and there’s no telling where towns, caves, temples, and enemies are. The biggest kicker is that as you travel, your party loses their sanity. To offset the effects of travel you can stay at villages, churches, drink whiskey, or eat some food. As party members lose their collective marbles, they will begin to bicker and argue and the spats may turn violent or deadly.

Surviving six expeditions is quite challenging, but you’re not alone. Some of the greatest minds from the 19th century are available to lead your party! Each character has a unique set of traits that sets them apart from the others. Not everyone is available at the beginning so you’ll have to unlock many of them as you venture forth and make a name for yourself.

Some of the characters I recognized include Charles Darwin, Nikola Tesla, Amelia Earhart, Harriet Tubman, Marie Curie, and Aleister Crowley. Keep in mind that some characters do better in certain terrains than others and they all have different starting equipment. With the completion of each expedition, you can choose between a few traits to further enhance them for as long as you can keep them alive. Once your party dies, it’s game over and you’ll have to start over from the beginning.

When you launch the game, you’ll start off with a quick tutorial to show you the basics. Once that’s finished you’ll get to select your fearless leader, choose your destination, and embark on your adventure. When your boat docks you’ll have an option to fill/refill your water. Don’t forget to do this! If you have any gold, you’ll also be able to purchase some supplies like food, torches, rope, dynamite, shovels, machetes, fireworks, climbing gear, etc. Don’t stock up on too much as carrying too many supplies will over-burden and slow down your party.

Before leaving the ship, you’ll have an opportunity to take on a quest for delivering a letter, retrieving someone’s wife, or defeating some sort of threatening creature. You’ll also get to choose a fellow shipmate to join your party. While you’re ultimately searching for the golden pyramid, you should try and stop at various towns to rest, trade, and recruit more party members. However, before you can do any of those, you’ll often have to gain their trust first. Giving away precious supplies usually wins them over. When staying at a village you’ll often be asked your thoughts on polygamy or equality or supremacy of the two genders. Your responses will impact your relationship with the town.

Looting temples will hurt your relationship with nearby villages. Though the riches will give you gold and fame, they come with dire consequences as the nearby terrain becomes unstable due to various natural disasters. Along with natural disasters, you’ll have to contend with aggressive and territorial creatures who can be distracted with fireworks if you have them on hand. 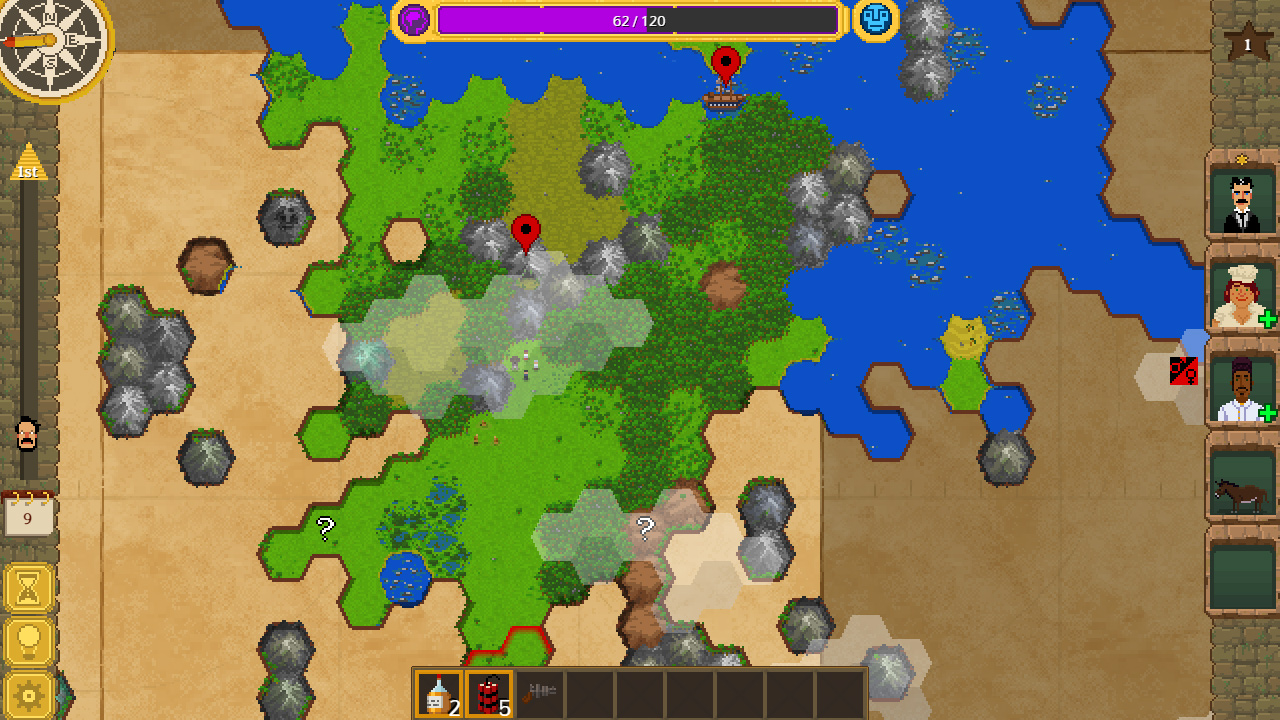 Battles are done by rolling dice. You can save the rolls you like and re-roll the others to form offensive or defensive moves. Running is always an option, but you may drop some valuable items as you make your getaway.

Pixelated blood is shown, but many of the gruesome details are handled in the dialogue. As you travel, your party will come down with various injuries and sicknesses. Other scenarios like helping your party members engage in same-sex relationships may happen. Sometimes a party member will want to leave and you can let them or battle to have them stay. Various religions are depicted as you will escort Christian missionaries, defile temples, or have Aleister Crowley (occultist) lead your party.

The pixelated graphics are a mixed bag. The backdrops look really well done, but the near-stick figure characters remind me of Commodore 64 era games. I like the hand-drawn art direction of the sequel much better.

I have no complaints on the audio front. The chiptune background music is fitting and catchy. Also, the sound effects and background noises are well done.

With the randomization and unlockable characters, this title is bound to entertain (or frustrate if you’re not good at it) for hours. It’s an interesting premise, but I’m not a fan of some of the historical figures present and the ideals they represent.