Skydiving has always held a certain interest in me. There's just something exhilarating about jumping out of a plane, with nothing to hold onto except your parachute, as you plummet toward the earth below. So you can imagine my excitement when I came across this title. A WWII shooter with something that stood out: you’re part of the US 82nd Airborne, a paratrooper. Able to drop anywhere onto the battlefield, you can choose whether you land on a roof or tower crawling with enemies, or safely into an alleyway or other designated areas.

Other than parachuting, Medal of Honor: Airborne doesn’t do too much different than any other WWII shooter. Nazis still need to be killed, you’re still using the same weapons, and stuff still needs to go boom. Before the game was released, EA told the press that because of the non-linear nature of their game, they had to create a whole new AI for Airborne. EA boasted that this A.I., called Affordance A.I., could actually react and respond to their environment and adjust their strategy according to how you approach them. I just wish that this wasn’t a lie. Enemies will still go to the same cover every time you approach them and retreat at the same point when you kill enough of them. There were even times when it seems enemies weren’t aware of my presence -- while I was firing an automatic from ten feet away.

Objectives can be accomplished in any order. Although the order in which I accomplished them didn't affect anything, it was a nice change to do it how I wanted to. Objectives ranged from killing an enemy commander or disabling a radio tower, to blowing up anti-air guns. Not particularly unique, but it never got boring, either.

What is pretty unique, is the cover system. Instead of an actual cover system that takes the action out of your hands, Airborne implements an iron-sighting cover mechanic that gives you total control. While iron-sighting you can lean up, down, left, right, and anywhere in between. Instead of going prone, you can crouch and then lean down to get protection from even the smallest of cover. Then pop out from the side and get off a few shots. This was harder to do with scoped weapons (while leaning you’re always scoped), but I adjusted to it after awhile. 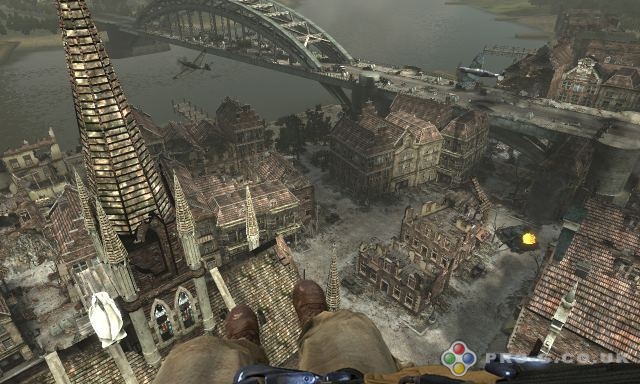 This game doesn’t get repetitive; it simply doesn't have a chance to as the entire campaign is merely six missions long. Now these missions are slightly longer than your average shooter’s missions, but not by much. It took me roughly 9 hours to beat the entire game, and since it’s unlikely you’ll be playing the multiplayer (I wasn’t able to play a single round of anything), that’s not very long. You can always go back to previous levels to try a different approach, use different weapons, or attempt to complete it on a higher difficulty, but that still doesn’t add much length to the game.

Assuming you can find a game (which I was unable to, so my opinion is based on gameplay videos) multiplayer seems to be good, minus the exclusion of split screen multiplayer. Modes include team deathmatch, objective, and hot zone (king of the hill). It’s not the modes that set it apart though, it’s the mechanics. Just like in the campaign, the Allies will parachute to the ground while the Axis can scurry along the rooftops trying to shoot them down. Once on the ground, gameplay isn't much different than any other shooter. One thing worth noting however, is that guns upgrade as you use them. Not in the pick and choose style, but a linear leveling up. You may start out with a simple shotgun, but after exterminating enough Nazis (or Allies), you’ll have a powerful, accurate killing machine with a 16-inch bayonet sticking off the front. Thankfully, this feature is present in the single-player as well.

This may not be a very descriptive portrayal, but this looks like a WWII game. Certainly a good looking WWII game, but still too familiar. Nothing stood out. Colors were naturally darker and the animation seemed a bit jerky. There were no “wow” moments, everything just seemed so basic. Whenever I saw something that I believe the developers meant to be those “wow” moments, I just sat there and wondered when I could kill more Nazis. However, levels were designed well, and I was never bothered by texture pop-in or frame rate issues. Everything is solid, but not impressive.

With most WWII shooters, it seems that developers love shoving history down our throats. To some degree, I’m okay with this. When I think about how this is a portrayal of what actually happened (kind of), it makes me care about my fellow brothers-in-arms. Whenever someone dies, I mourn a little inside. That person had a name, a life, a family, a dream, and now they’re dead. Unfortunately with Airborne, I didn't feel any of that. Soldiers were just men with guns, they didn't have names, and they didn’t have personalities. Occasionally I would catch a glimpse of a personality during the plane ride before the jump, but it always vanished right after the jump. When I saw a man falling lifelessly to the ground, it didn't move me, it just meant I had less covering fire. EA Los Angeles tried to fit in a story/history by including unskippable briefings before each mission, describing your target and objectives, but it was just boring and unnecessary. I wasn't interested in who everybody was, where I was, what I was attacking, and when this happened. 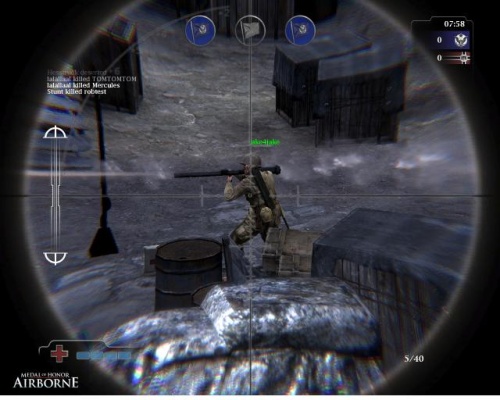 I hate to reuse a phrase, but it describes this game so well. This game sounds like a WWII game. All the characters sound like your average Joe, drafted into the military in order to serve their country. Music is used in the background, but it never stood out, whether for good or bad reasons. It was used to add emphasis to intense gunfights and to be immediately forgotten afterwards. Guns don’t sound particularly different from any other game, which is fine, but the same can be said for explosions too. I don’t mind when a certain element isn’t of the highest quality, but when everything is so forgettable, this becomes a problem. There just weren’t any voices, music, or sounds that stood out at all. It’s all perfectly passable, but a game’s sound should be more than just average.

I suppose complaining that Medal of Honor’s controls aren’t the same as Call of Duty’s isn’t a legitimate complaint, but that’s my complaint. Eventually I did find something that worked, but it still seemed a bit off. It felt unnatural; I had to remember what buttons were used for what action. The melee also was a bit too delayed, and not powerful enough. Enemies don’t even flinch when hit, and most close combat comes down to button mashing. I’m just glad the leaning mechanic is well implemented. While iron-sighting, movement is sacrificed and the left stick is used to lean in any direction. It was easy to use and I’d even go so far as to say it’s better than the ability to go prone.

I apologize for bringing this up again, but I can’t say any questionable content is anything different than any other WWII shooter either. When soldiers are shot, they spurt blood that disappears immediately afterwards. After being killed they will also fall limply to the ground. Although Nazis are playable in multiplayer, it’s unlikely you’ll be playing as them since the multiplayer is dead. The swearing wasn’t excessive (no f-bombs and characters didn’t do it that often), but the Lord’s name was taken in vain.

I used the phrase “WWII shooter” to describe this game more times than I care to count, but that’s exactly what it is. Every part of it feels almost exactly like any other shooter I’ve played that happens to be set during WWII. The only thing that’s sets it apart is the parachuting and non-linear levels. But is that really enough to justify buying yet another WWII shooter? For most people, probably not, but I could see how some might enjoy this game more than I did. I came in with expectations of a WWII shooter unlike the others, one with open-ended gameplay and exhilarating skydiving, but I didn’t get that. What I played was enjoyable, and while I wouldn’t strongly recommend it, Medal of Honor: Airborne may be worth a try if you’re looking for a decent WWII shooter.