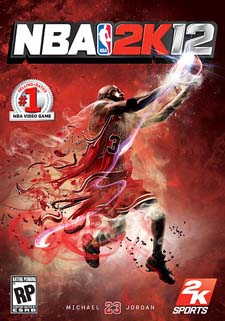 Yet another year has come for 2K to release their latest NBA game, and this year they showed that they've gotten better at what they do best: making basketball games.

Right off the bat, the game shows you a cinematic, introductory trailer that features all the legendary players that 2K chose, such as: Michael Jordan, Magic Johnson, and Larry Bird. There are the jaw-dropping dunks, flashy passes, and historic plays from the superstars that are all too easy to remember if you are old enough to have watched them in their glory days. You're barely into the game and you already think it's too awesome.

Sure enough, 2K12 exceeds its "Legends" quota and gives you NBA's Greatest mode. Never have I seen a game of this genre that exhibits modern aspects of the sport as well as the past aspects. The NBA 2K12 time machine blasts you to past games ranging from the mid-60s to the late 90s, providing you a good perspective of the environment, atmosphere, and play-style the of games in each year. At the same time, you step into the shoes of each of the 15 players that made their mark in the game, fully in control of every play.

One game you're battling it out in black and white in the 60s as the Boston Celtics, blocking shots with Bill Russell like it’s no one else's business, and the next you're tearing it up with Michael and the Bulls as you reminisce the days in which Jordan reigned over the league. 2K really went into a lot of detail as to replicating the experience of the regular season games of yesteryear, and that's what really stands out about this game. The true to life jersey numbers, tendency, and appearance of each player from each retro team is fully accounted for, the commentators provide you with player and team stats existent in that specific time period, and each city arena is touched up to the finest with every half-time horn and hardwood covering in place. I consider this mode very rewarding as each retro team is unlocked in Quick Play mode after winning with it in NBA's greatest mode, making epic battles between retro teams and teams of today possible. Who wouldn't want to see Jordan and LeBron go head to head? 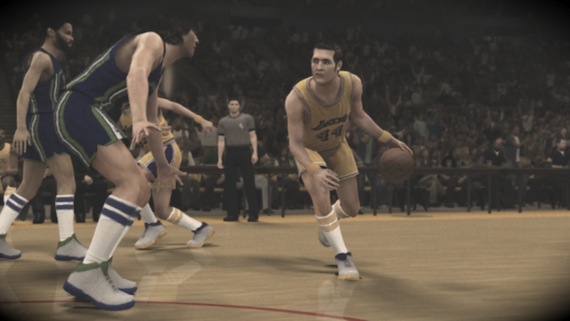 Strong Points: Packs a creative story (My Player) mode. The addition of NBA legends and their historic games.
Weak Points: Online issues and limitations are many.
Moral Warnings: You have choice to become somewhat notorious throughout your created player's career.

Being a loyal 2K fan, you expect to get the same game modes out of it as you would from other basketball sims. The ability to create and personalize your own season and playoff has always been there. The prevailing Association mode allows you to be both the general manager and players of a team you choose to enter into a season. I never tire from changing the style and make-up of my roster to my needs in order to release the full potential of my game on the court, and it's always satisfying to finally hold up that trophy after so much careful managing and strategizing.

So is it fair to say that NBA's Greatest triumphs over the existing modes? Close, but no cigar. 2K first implemented their new idea of taking the create-your-own-player aspect of the game further back in 2K10. This brilliant idea has now bloomed into a powerhouse of a game mode that is My Player.

My Player is the reason I fell in love with the series. The fact that you only control the player you create and not the whole team doesn't get in the way of the fun you have in this game mode. Now I usually whip up a quick exhibition game just to get the feel of it and get myself familiar with the new controls, but when I bought my copy, I literally went straight to My Player mode because for me it's taken over all the other parts of the game. They really emphasized customization of your player this year; the question really is what can't you modify.  I found myself having more fun in the menu than on the court itself while I was giving my 6'10", 300lbs power forward out of U.S.C. a Mohawk. But this is also where 2K creates the balance in this mode. You can no longer go back to the days when you could create a fast, 7'6" point guard that could shoot three-pointers better than Ray Allen, handle the ball better than Allen Iverson, and pass the ball like Steve Nash. In 2K12, they limit your player's abilities at first; you have to go through rounds of training to upgrade your player's skill. I am in agreement with this as dominating the NBA at first with a 99 overall rating is no fun. This is another reason why My Player rocks; you only progress through hard work. The only way your player is going to become an elite in the NBA is to perform in games. Skill Points are key, they are going to be the tickets that allow you to upgrade your skill and attributes. There are numerous ways of earning these. Each game you play will have certain challenges attached to it, and completion of these challenges will earn you your Skill Points. One challenge may require  that you score 18 points, grab 7 rebounds, or 10 assists before the final buzzer sounds. Obviously the better performances will reap better rewards. Skill points are also earned by completing season milestones or achievements. For example, by finishing 50 games, you earn 1000 Skill points.

Truthfully, my first few games were rough as I failed to get the attention from both the fans and my teammates. Realistically, you can't always have the ball in your hand; trying to win games with reliance in only yourself will result in failure. This is why you have to work at getting better in this game. Now I'll stop being technical for a while because this mode really does well in making your career a story. With enough noise and progress you make in the league, deserved endorsements will come your way. After getting on a few covers of sports magazines, Michael Jordan himself endorsed me and handed me my first signature shoe. It wasn't too long after that until I was cast in a Nike commercial with the other all-stars. Moreover, this is the first ever sports game to add press conferences. You'll come to find that the world of My Player is very rewarding. I'll guarantee you a fun-filled experience from the moment the commentator announces your name for the first time, to the moment you give your retirement speech. 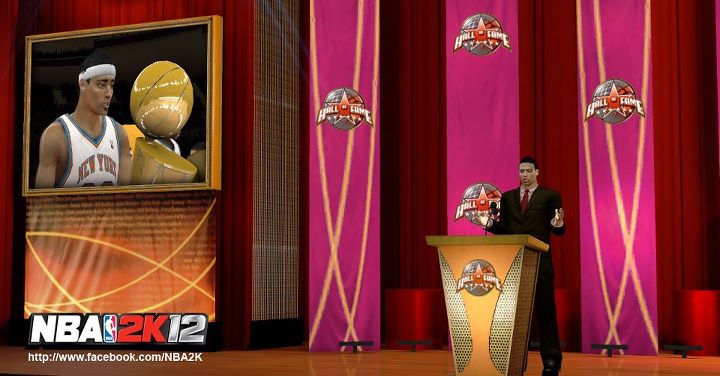 My Player: Hall of Fame speech.
Score Breakdown:
Higher is better
(10/10 is perfect)

2K12’s control scheme is great. The Iso-motion system has been revamped and the new controls allow the 2K gamers to show their craftiness and creativity in handling the ball. It’s worth checking out the manual for a full list of the dribble moves you can perform, because really, you can’t expect to get to the basket using the same move over and over; this is your chance to really spice up your game and try different things.

The overall graphics are impressive, with one little flaw being that some of the players’ faces look a bit wacky. Nevertheless, there is more fluidity between model animations, meaning you'll almost have no experience of going through the bodies of other players. They still haven't been able to completely eradicate problems like this as sometimes body parts of some players would somehow momentarily go through solid objects, but they're making remarkable progress. Still, everything else looks beautiful. Crowds aren't unrealistically homogenized anymore as they do separate actions and wear different attire. They really took time to create an aesthetically good-looking environment to make the experience seem more realistic; sometimes you forget you're playing a video game and not watching a regular season game on TNT.

Multiplayer mode consists of two core sub-game modes: Team-up, which puts you in a lobby holding up to 10 random players maximum, and Quick Match, which puts you against only one other random person. Don't expect to have too much fun or get many wins in Team-up if you don't have friends playing with you in the lobby. Too many times I find myself being teamed up with greedy players with a one-man-team mindset. Fortunately, you can setup your own Team-up lobby where only friends of the lobby leader are invited to compete. Now if you're looking for hardcore, "mano y mano" competition, then Ranked Quick Match is where it's at. Personally, this is the part of the game where I get down to business; It’s fun, but more competitive. This is where all the hard work of practicing this game, learning the right tactics, and utilizing each team correctly pays off. It's ranked, so every win counts. Again, unranked private matches are there so you can verse your friends. 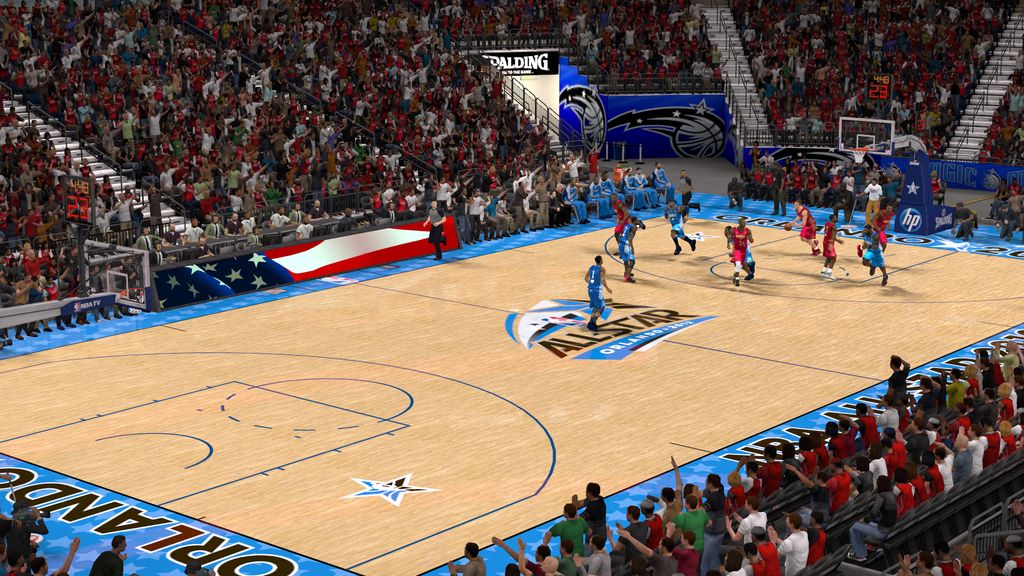 A zoomed-out perspective of beautiful arena.

Though multiplayer is very enjoyable and favors the competitive gamer, problems with the online functions are many. Lag, and instability: these are the key problems in multiplayer that dashed 2K12's hopes of achieving what-could-have-been the most polished sports title of all time award. I can't tell you how many times I've had an on-going game just come to a complete halt due to 2K's server issues; it's hard enough with the lag issue present. Imagine, you're in the dying seconds of the game, up by 20 points, and wondering why your opponent hasn't called it quits yet, and all of a sudden an impromptu pops up telling you that you've been disconnected from the game due to supposed "network issues". If it was a friendly, unranked game between my buddy, I'd totally refrain from controller-bashing. But this occurs in ranked matches as well, and my opponent was basically handed an easy way out of a loss, while I on the other hand had the win taken right out of my hands.

NBA 2K12 scores a near-perfect moral score as you won't find much aspects that is in disagreement with His Word. Violence, Sexual immoralities, vulgar language and supernatural ordeals are non-existent. Body tattoos aside, My Player allows you to choose an ethical and moral profile, meaning you have the choice to say what you want in press conferences. What you choose to say will be reflected by your teammates, fans, and the league, no matter how good you are. Being a hog in games, and an arrogant celebrity outside of the court will result in your teammates not being too fond of you; so you'll find yourself touching the ball less and sitting on the bench more. Furthermore, you will be the center of the crowd boos in the little amount of time you do have possession of the ball. On the other hand, it seems My Player rewards those who choose the humble path with love from teammates and fans. At one point the crowd repeatedly chanted "MVP! MVP!" during my free-throw attempts; I loved every second of it.

The soundtrack is generally inappropriate for younger kids, but as most games would do, the lyrics in the songs have been censored to silence all curses and swear words. I realized this because I noticed that in some songs I couldn't listen to a full verse without hearing a half-second break of silence.

The fact that you can't make a lay-up shouldn't stop you from picking up your own copy; whether you're a vigorous athlete on the hardwood, an NBA fan-boy, or just an average-Joe gamer, I highly recommend you immerse yourself in the world of NBA 2k12 for loads of entertainment.