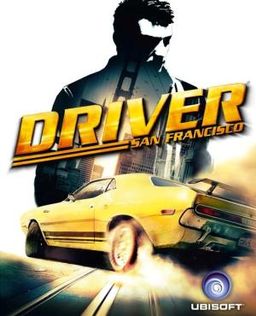 I have no idea who was experimenting with lucid dreaming over at Ubisoft Reflections, but whoever it was, I thank them. Instead of continuing down the road of Driv3r and Parallel Lines—a road strikingly “similar” to Grand Theft Auto—and ensuring the IP’s (seemingly) well-deserved demise, they did something completely unexpected and delivered one of the most unique racing titles I have yet to play. Unlike its predecessors, Driver: San Francisco has eschewed the wonky gun mechanics and unnecessary on-foot sections for pure open world driving. And what glorious driving it is.

As should be rather obvious by the subtitle, this installment is set in San Francisco. Only instead of the San Francisco we all know and love (or not), this city is merely a representation inside the mind of the series’ main protagonist, John Tanner. See, he isn’t doing so well. After a nasty run-in with his longtime nemesis, Charles Jericho, he’s been left in a coma with an indefinite chance of ever waking up. However, thanks to the power of outlandish writing, John is still working as an undercover cop in this hallucination, but with a few more tricks than before.

In addition to his already ridiculous ability to survive car crashes, John can also now inhabit the bodies of others to help him complete his (morally ambiguous) mission. Players can “shift” into nearly any car on the street, or anywhere in San Francisco for that matter, and use it to ram other cars off the road, create roadblocks, or just to upgrade to a faster vehicle. Not only does this create some interesting possibilities for races and other challenges, but it also removes the need for: a quick travel system, frustrating wrecks, and a ton of menu navigation. 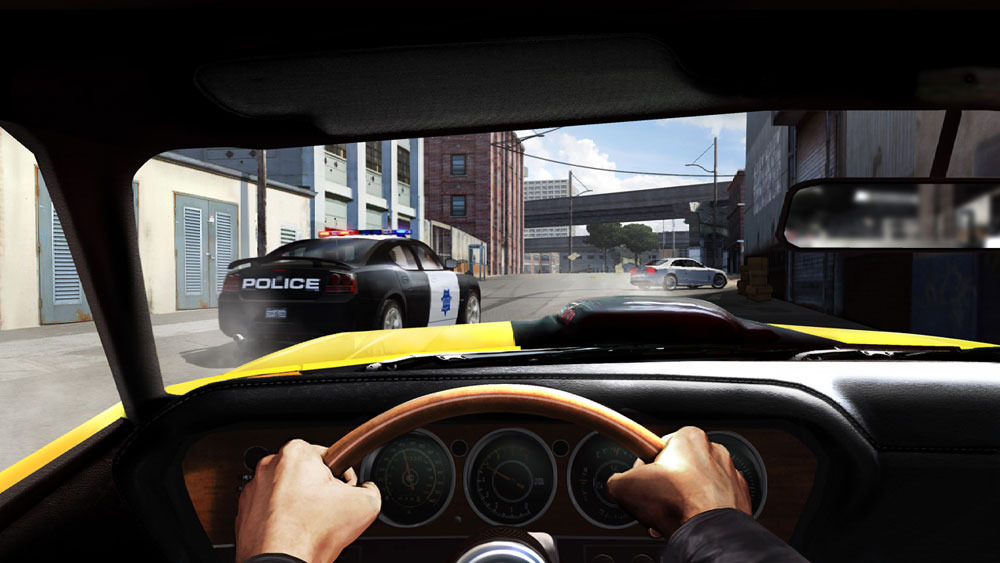 There are a few challenges and end-game missions that don’t incorporate this system, but I was impressed with how often, and how well, Reflections was able to fit this in. Despite the absolutely overwhelming feelings that this would break the game, there was never a time where the idea felt misused or game-breaking. Races are balanced well, challenges make good use of the ability for locating vehicles and completing objectives, and even the story manages to explain and exercise the ability’s uses in restraint.

Which is really a credit to the developer's strong writing, because despite the bizarre circumstances the characters find themselves in, the dialogue never seems overly serious or expository. Rather, it takes on the air of a buddy-cop drama to great effect. John Tanner has a great foil in the form of Tobias Jones, and the story manages to create quite a few funny situations between the two through the use of John’s shifting ability.

In fact, it seems like a lot of attention was paid to the humor, and without it, I don’t think the game would have been anywhere near as entertaining. Everything is taken much less seriously (excluding confrontations with the main antagonists), and it was rare that the grin left my face as I jumped between cars, each with its own confused passenger wondering why their driver just had a drastic change in disposition. Thankfully, not every car has a passenger, so jokes aren’t frequently repeated, but Tanner does speak up more to fill the void. 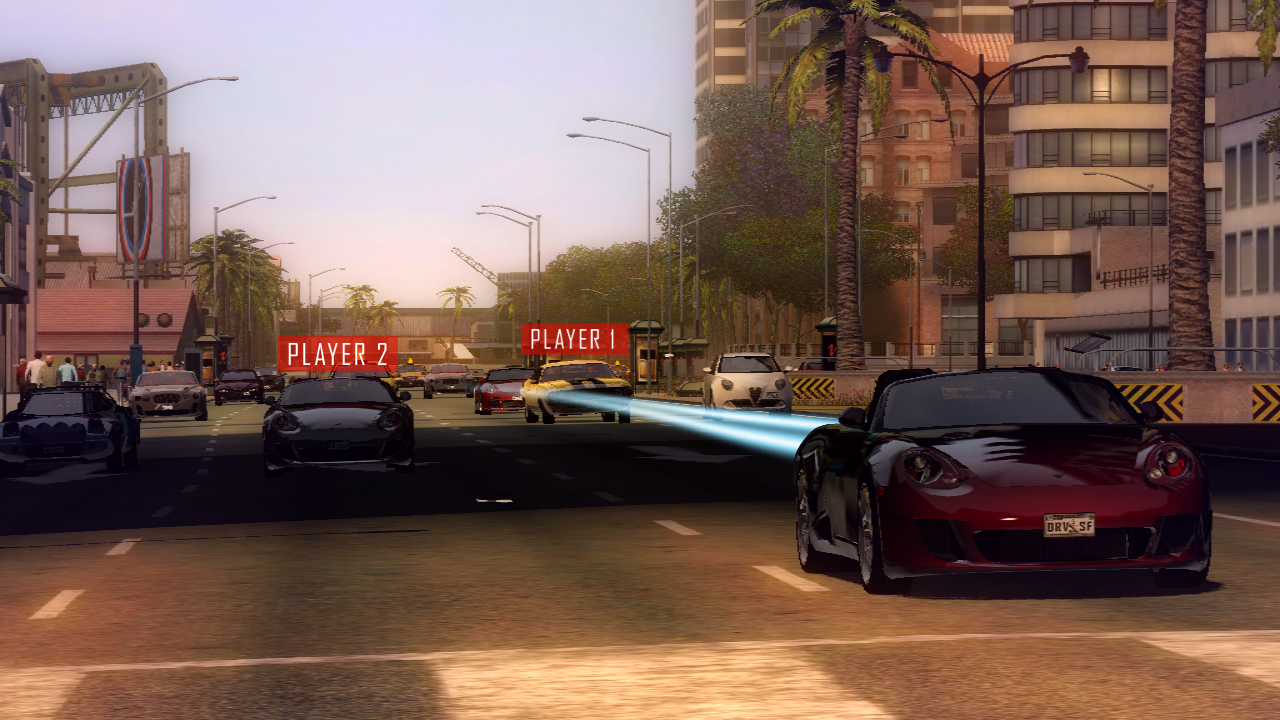 Unfortunately, not even clever dialogue can fill the void that is San Francisco. Despite all of the challenges, races, and dares scattered about the city, San Fran just doesn’t feel alive. People walk the streets, police chase lawbreakers, and there are more than enough cars on the road, but the city just seems so… mechanical. There’s nothing immediately wrong with the city, but the more I played, the more I felt like this really was a dream. Cops are oblivious to anything but their current objective; cars drive in predetermined paths, going crazy if they’re interrupted; and the AI is brutal—nearly superhumanly so— in both police and getaway cars.

That doesn’t speak to the quality of single-player story mode though, as it’s beyond just being serviceable or decent. Not only is there hours upon hours of content, both in and outside of the main storyline, but there are also dozens of cars to buy and tons of collectables hidden around the city which unlock yet even more challenges, many of which are homages to famous car chases.

And even excluding the single-player, there’s still an abundance of content packed into Driver. I’ve never been one for multiplayer, and Driver hasn’t changed that, but I have no doubt that racing fans will be more than satisfied with San Francisco’s split-screen and online multiplayer options. Classic modes like Takedown (cops and robbers) are available along with competitive races, a few more unique modes like shift racing, and even a few co-op modes are available for split-screen players. 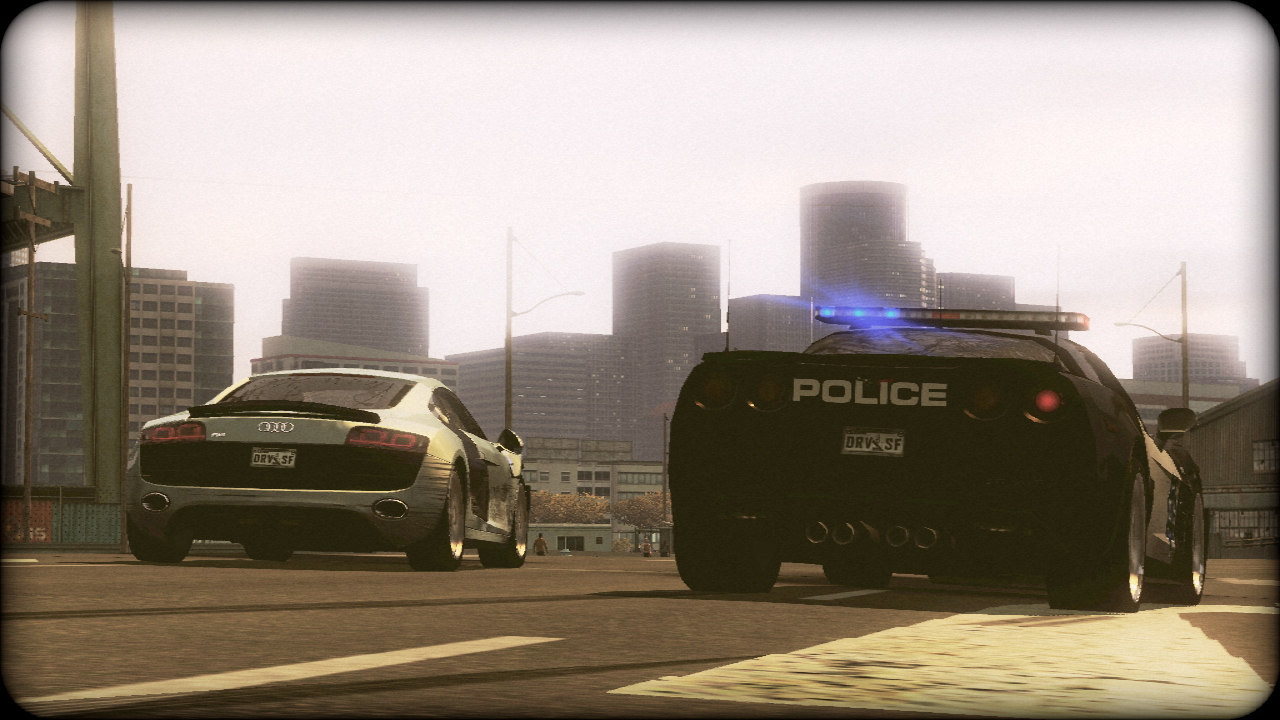 Both in practice and in play, Driver: San Francisco works. I can’t explain why, because many of its problems should be far more pronounced than they are, but they aren’t. The central mechanic should become repetitive—it doesn’t. The story and dialogue should feel corny and forced—they don’t. San Francisco wasn’t designed as a race course; the streets should be confusing and difficult to navigate—they aren’t.

Perhaps in other titles, this would be compensated for by poor controls or audio troubles, but aside from the one glitch I encountered with the sound, dialogue repeating (every ten seconds), there’s hardly anything worth complaining about. The controls are smooth, and while the voice actors certainly won’t win any awards for their parts, I never found any one actor as having a stale performance.

That can’t be said for the moral content however, as after about ten minutes, I was already weary of the foul-mouthed protagonists and antagonists (and everyone else, for that matter). It’s not particularly uncommon for frequent cursing in T-rated games, but Driver takes it to the extreme with *sshole, b*st*rd, d*mn,  and b*tch used every five minutes, on top of using the Lord’s name in vain more times than I care to count. I suppose it makes sense when considering Tanner’s position as an undercover cop, but there are multiple times in the game where players must either outrun or wreck police cars. Though less noticeable when compared to the language, a few sexual jokes also made their way in, but they are far more tame than what can be found in other comparable titles.  It should have been fairly obvious throughout the review, but there is also plenty of vehicular violence. None of the passengers are ever injured, but I questioned John’s morals more than once as he threw random cars into harm’s way using his shifting ability.

Despite this (mostly) praised-filled review, Driver: San Francisco hasn’t become my favorite new racer. It’s not the best racing game I’ve ever played, but this latest title in the franchise accomplishes exactly what the series set out to do in the first place: deliver an amazing racing experience in a world more open than (almost) anything else out there. That it’s able to do this while retaining tight driving mechanics and excellent humor is a testament to all the work that Ubisoft Reflections put in, and it would be a shame if you missed that work.