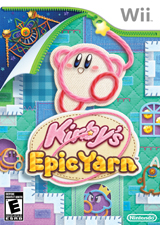 One day, Kirby is enjoying a peaceful walk through Dream Land, and spots a strange looking tomato, which turns out to be a magical one called a Metamato.  As he sucks it in a strange new villain, Yin-Yarn, tries to interrupt him and fails.  He then uses his magic sock to open a portal to Patch Land, and brings Kirby and his friends there.  Once in Patch Land, he finds that his form has changed – he's now made of yarn, and the world around him is also made of various kinds of fabric.  He attempts to suck in enemies, but it doesn't work – the air goes right through him!  He quickly meets a new friend named Prince Fluff, and they find that instead of sucking in his enemies, he can transform into new shapes.  Yin-Yarn has also nearly destroyed Patch Land, so Kirby promises to help Prince Fluff save his world.

While Nintendo is best known for its Mario and Zelda franchises, Kirby is often where some of its most creative work goes.  Kirby's Epic Yarn is definitely one of the best examples of that.  This game just oozes creativity and style, where the idea of a world of fabric is so well realized that it's incredibly endearing.  Being made of a reformable new material, he can quickly turn into a car, a parachute, or even a heavy weight to drop onto his enemies.  And not only can he change shape, but so does his environment.

Kirby's main action is to lasso a piece of string in any direction and pull it back.  This is used to wonderful effect not only to pull apart his enemies, which fall to pieces and disappear into a pile of string, but also to affect the flat two-dimensional world around him.  Often there is a button with a string attached, that if lassoed, will distort the landscape like a pulled drape and reveal a new platform or path.  Kirby can also hang from a bronze button, where he can swing to reach new places.  There are various blocks he can pull apart, or zippers he can unzip to reveal something underneath.  You can even sometimes find a seam or pocket that you can go into.  Once inside, you can move in that space, creating a bump in the outer fabric as you grab your treasures or find the next exit.  There is much to discover, a new world with new rules to learn and realize, all loaded with charm.  I felt like a kid again playing it, and from me that is very high praise. 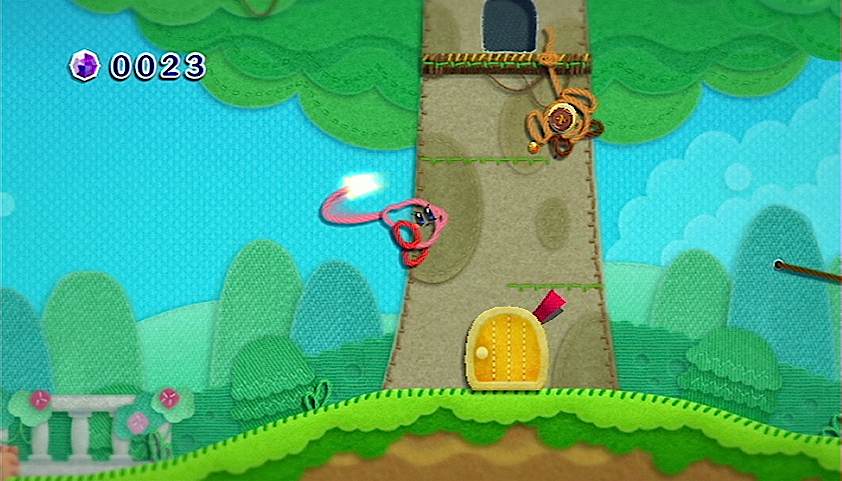 Strong Points: Excellent 2D artistic style; fabulous music; very high quality storybook voice acting; heartwarming story, and game, all around
Weak Points: If you die, there is very little punishment, as you just lose some beads (like coins); not overly challenging, especially in the early part of the game; short if you do not collect everything
Moral Warnings: Very minor cartoon violence; 'darned' is used once

Certain parts of many levels have Kirby transforming into a new form.  During these sections, you can become almost anything, from a tank to a spaceship to a dolphin.  These sections are occasionally frustrating, but mostly a ton of fun.  I really liked the spaceship sections as they reminded me of classic arcade games.

Outside of the platforming elements, neat transformations, and very creative bosses, there is a collection system.  You can collect items to decorate your apartment and help others do the same, as well as a few minigames that come from this.  You can also spend your beads on new fabrics and other pieces for decoration purposes.  This is not an area of the game that I focused on, but if you like there are many, many hours of gameplay here.  In order to get a '100%' save, you will need to do many of these things.

The multiplayer in this game is a lot of fun, though occasionally frustrating.  Now it probably does make the game quite a bit easier, but I played this game with my young children, who enjoyed this game a whole lot with me.  When you begin playing, you choose one or two players, each who uses a Wii Remote on its side, NES style. This game uses mostly NES controls, with the occasional use of the 'A' button or tilting.  The decorating section does use the pointer, but rarely is it used otherwise.  The second player comes in handy as an additionally throwable character, and also to help you get hard to reach treasures.  It also adds a layer of challenge as I would have to keep telling my younger ones to 'press A' to engage an angel which can carry them to safety while I navigate trickier segments.  The angel can also be automatically engaged if one character progresses vertically high enough to put the other one too far off screen.  As a result of the angel mechanic, it's a fairly easy game overall, as this also happens when you die or take damage. 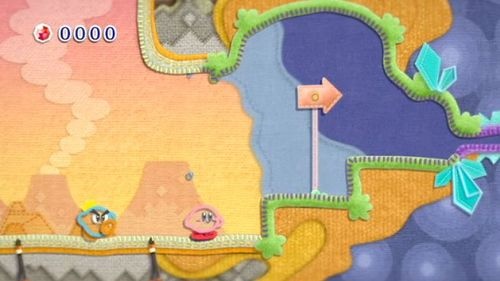 The graphics are quite lovely.  Everything looks like some kind of fabric, and it's very convincing.  And the excellent, buttery-smooth animations really bring it to life.  This game is one that doesn't really look any worse not being in high definition, as the artistic style does not bring forth aliasing of any kind.

While the graphics excel, the sound excels at least as much.  The music is fabulous, with smooth and soaring piano pieces, lilting flutes, and other feel-good music that is simply exquisite.  Being a Kirby game it obviously will be obnoxiously happy-go-lucky style, but that really didn't bother me at all.  There were a few songs that I heard while playing where I kept thinking 'where can I buy this CD?' For a fan of jazz, it was very enjoyable in places.  The sound effects are typical Kirby, with booms and splats as you expect them, and with cheerfully sweet ditties throughout.

Speaking of cheerful, this game is morally squeaky-clean.  There is fairy-tale magic.  There is one use of the word 'darned', and animated violence as yarn pulls, bops, or explodes everywhere. This is about as family friendly as possible outside of Tetris or a Bible game.

Kirby's Epic Yarn was one of those games that I always wanted to grab, but procrastinated.  Once I saw it for a great price used, I picked it up immediately, and I am very glad I did.  This is a game that my kids and I have thoroughly enjoyed playing together, and even since we beat it, they are continuing to play it.  That's what they are doing as I write this.  And you should too.  It's simply Epic.