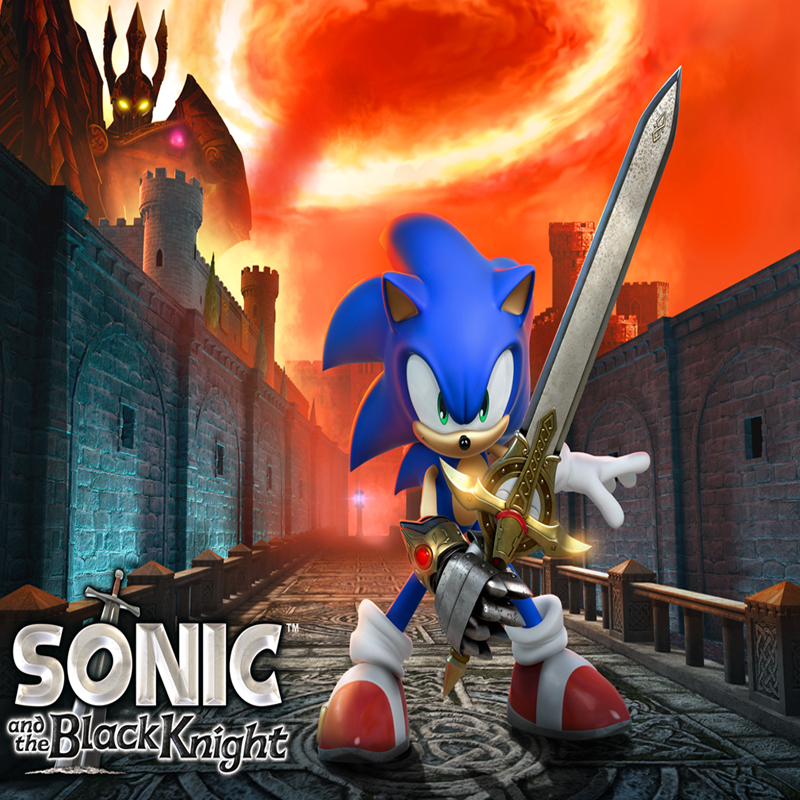 Sonic is back in action once again as he is teleported to the mysterious land of Avalon to defeat King Arthur. Once a tender-hearted king, loved and admired by his followers, King Arthur has become corrupted by the powers of the scabbard of the legendary sword Excalibur. Now plunging his kingdom into darkness, it seems that no one can stop him - and as long as he has that scabbard, he is immortal. With the help of Merlina the Wizard, and Caliburn a talking sword, Sonic must help villagers in need, defeat the Knights of the Round Table, and obtain the Sacred Swords. Sonic is certain that this adventure will be an action-packed thrill ride.

Sonic and the Black Knight's gameplay is a combination of Sonic-speed and fast-paced sword swinging action. The Wii Remote and Nunchuk is the only way to play this game. You swing the Wii Remote like a sword to attack, and the way you swing it determines what attacks Sonic will perform. Your other abilities are blocking attacks, Jump Dash to hone in on enemies or traverse huge gaps, and execute combos by attacking repeatedly.

As you progress through the game, you will also learn an ability called Soul Surge, which allows you to defeat enemies more quickly and efficiently, whether on the ground or in the air. If you swing the Wii Remote when Sonic's sword flashes, you'll land a Perfect Hit. You can use Soul Surge for a major speed boost when there aren't any enemies in sight, and you can kick your enemies during Soul Surge as well. Using Soul Surge gradually drains the Soul Gauge (which is required to use Soul Surge), but can be canceled by pressing the B button on the Wii Remote or extended by landing Perfect Hits continuously. The Soul Gauge can also be filled gradually by defeating enemies or collecting red faeries. 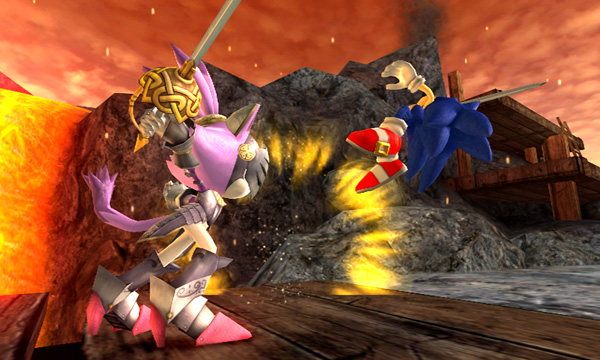 Rings, which are needed to stay alive, can be gained by collecting yellow faeries. Rings can also be gained by landing combo attacks; the bigger the combo, the more Rings you'll earn. You will lose Rings when you take damage, but the amount of Rings you lose depends on the enemy you're fighting. The maximum number of Rings you can have is 100.

In terms of combat, Sonic and the Black Knight is not easy. There are a variety of enemies with different sizes and abilities, so you must study enemies thoroughly as you proceed through the levels if you want to keep damage to a minimum. Sometimes a whole group of enemies will be in your way, like archers, axe-wielders, and super-sized soldiers who attempt to grab you and crush you in the palm of their hand. Besides fighting enemies, there are many actions you can take in the environment. You can climb walls, grind rails, shimmy across dangerous areas, and ride wagons. There will also be traps in some of the levels and occasionally you'll have to make yourself a path by cutting down bridges, ropes and gates, knocking down statues, and breaking through large-scale walls.

At the end of each level, you are graded on your performance; and depending on how well you do, you will receive a rating from 1 to 5 stars. However, the number of enemies you defeat, the damage you've taken, the number of Rings you have, and how fast you get there are not the only things you are graded on. In some levels, you will find villagers who are willing to trade you rare items in exchange for Rings. Rings are also needed in order to stay alive, so putting aside your own needs for the needs of others will be tested. At other times, you will see villagers cowering in fear as they're surrounded by enemies. You can stop to help them or ignore them, and you are also given the option of attacking them. You may attack a villager by mistake and the game will count that as a villainous action. Your morals will affect your overall ranking, so you need to be very cautious. 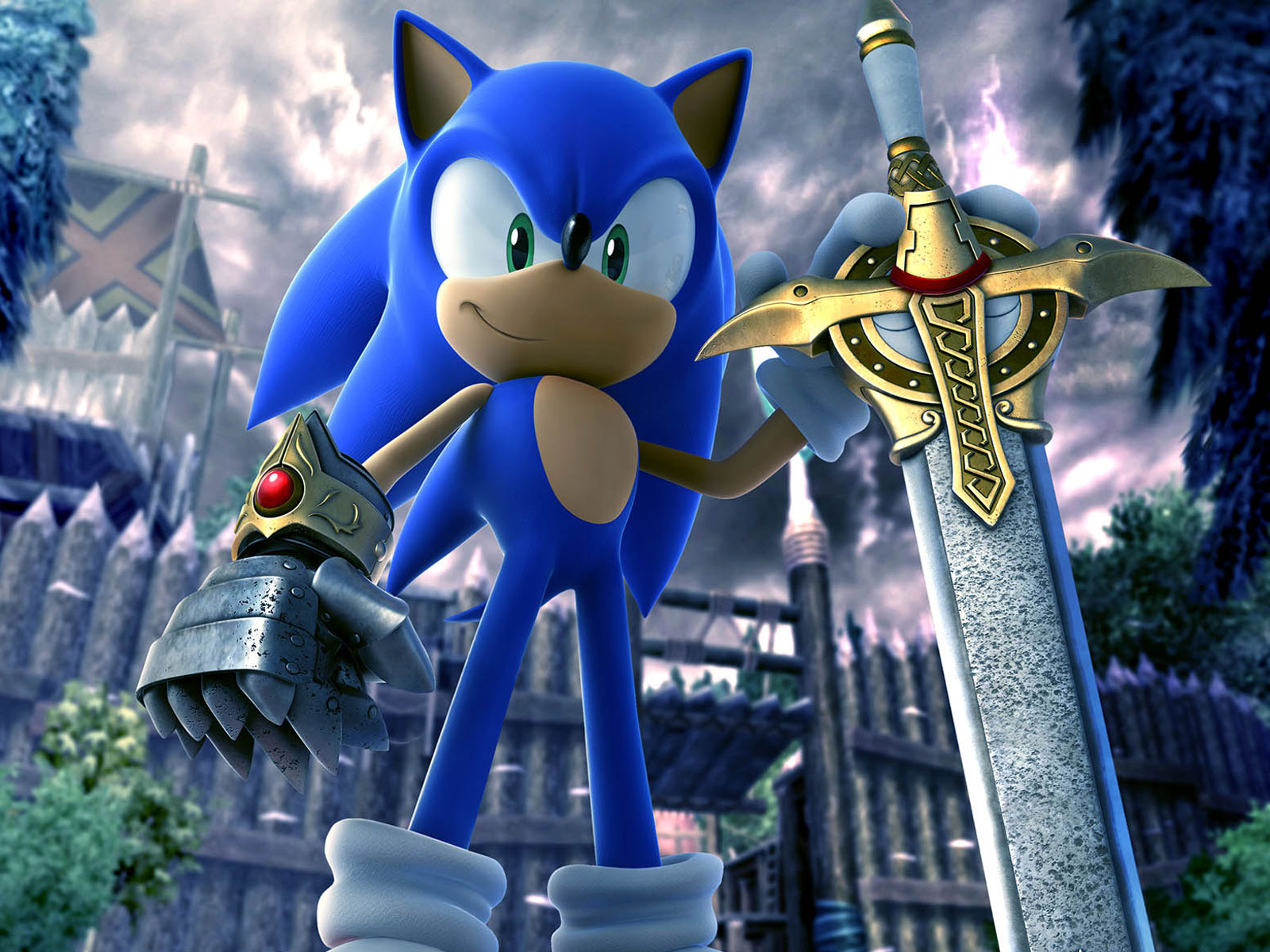 Once you complete a level, you are taken to the Identification Screen, where you can identify the items that you've collected or uncovered. Identification Points are required to identify items, and it does not show you what you're identifying so be careful of how many points you spend. You could end up identifying the same item over and over again.

At this point, either a cutscene will play or you will be taken to the world's map, where you can either go straight to the next level or visit the blacksmith. The blacksmith allows you to change your weapons, equipment, and your fighting style. Having different equipment enhances different abilities, such as making identifying certain items easier or cheaper, or allowing the Soul Gauge to fill up faster so you can use Soul Surge sooner, making level progression much easier.

If you want to do something besides story mode, there is a good amount of extra content. There is a treasure vault where you can look at the items you've collected in story mode - a whopping 200 items in total. You can even give those items to people you've registered as a Wii Friend over Nintendo Wi-fi. You can go to the gallery where you can watch videos, listen to music, and concept art you've unlocked. There is also an online mode in which you are given missions to complete and compete for the top ranking. And if your friends are interested, you can play multiplayer to unlock new battle modes, co-op modes and new stages to battle on. 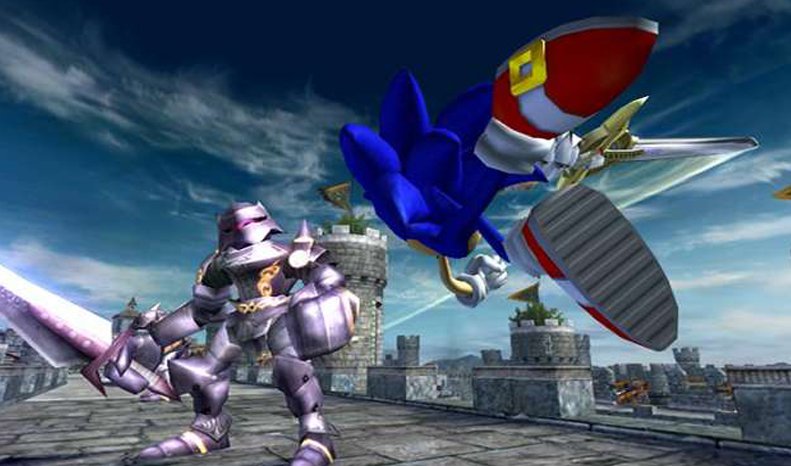 However, as fun as this game is, it is not without flaws. The controls can be unresponsive when engaged in Sword Lock in most boss battles. When in Sword Lock, an on-prompt will show up telling you to use the Wii Remote. No matter how many times you try to get it to work, you will be the one who ends up taking the hit. From personal experience, I only got it to work once.

As for morals, defiance of authority (trying to defeat a king), abuse of authority (King Arthur letting power go to his head), Sonic's stubborn attitude (his usual personality in Sonic games), and moral dilemmas are what to look out for. Be on the look out for occult references of an ordinary item bestowing immortality, use of magic, and "sacred" items.

Overall, I find Sonic and the Black Knight to be an excellent game. Some may find that the direction taken might be a bit odd for a Sonic game, but I thoroughly enjoyed my time playing it. I highly recommend it to Sonic fans and RPG lovers for its unique combination of speed and strategy, with some minor RPG elements added in (the blacksmith's shop). Besides the slight moral issues, this game is near family-friendly and is an excellent game to play with siblings and close friends. Although this game is hard to find (not to mention you can rent it from GameFly), trust me- this game is worth having invited into your library.