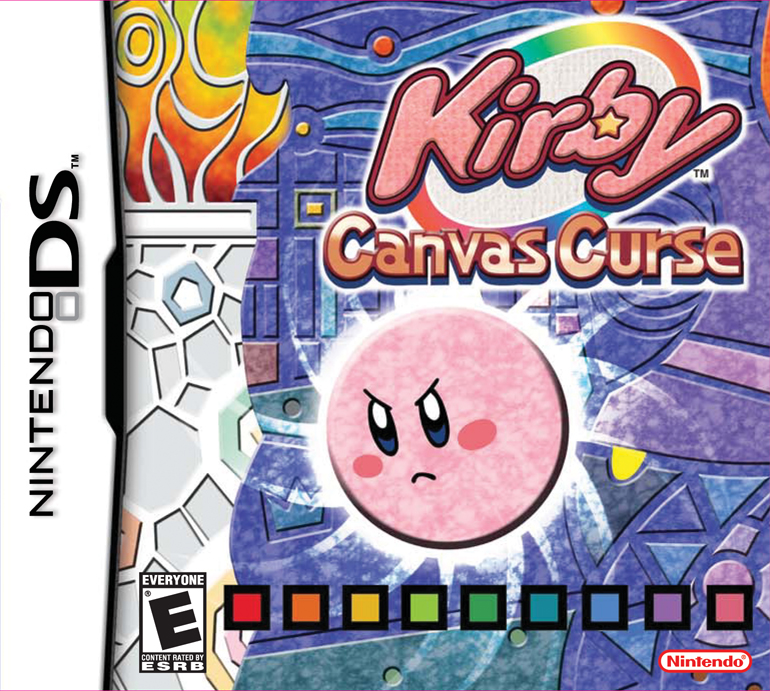 Kirby: Canvas Curse is the first of the Kirby adventures on the Nintendo DS, and also one of the more creative. One day, Kirby is taking a stroll through Dream Land, when suddenly the colors everywhere warp, and a strange witch arises, and turns the world into a painting. She sees Kirby, and escapes into a magical vortex. Kirby follows her into a world of paintings, where he confronts her, and she turns him into a nearly helpless ball. He finds her magical paintbrush, which is transferred to you, the player. So now, you can help Kirby defeat the evil witch Drawcia and return the world to normal!

What kind of game is this, and how does it work?

Well, this is technically a 2D platform game, though the controls are like very few other games out there. This is one game that is definitely only possible on a system with a touchscreen, like the Nintendo DS. Kirby is a helpless, rolling ball. In order to move, you have to touch him to make him dash, and draw lines with your stylus to guide him through the air and water. These lines are called rainbow lines, since they look like rainbows. You can also affect the environment around him. If you touch a monster, it is temporarily stunned, waiting for Kirby to run into it. Certain enemies, when stunned, can replace your dash ability with a different one, which usually has some advantage over the standard dash.

You can also touch various environmental elements, like breakable boxes, and many other things to help guide him around. Some breakable blocks can only be broken by using the power of a special ability. These abilities are lost when hit once, so be careful! There are eleven abilities you can get from running into stunned enemies. These are:

Balloon - Makes Kirby float. This one is not lost when hit.

Beam - Shoots a beam in a circle around Kirby.

Crash - Touch Kirby to have him perform a one-time blast knocking out everything on the screen.

Freeze - Turns Kirby into ice, and can freeze some enemies.

Missile - Kirby flies through the air as a missile. Guide his direction with rainbow lines.

Spark - Sends a huge electrical blast straight above you.

Tornado - Kirby spins like a tornado, and flies upwards when tapped.

Stone - Turns Kirby to stone. He\'s invincible and very heavy in this form.

Wheel - Turns Kirby into a giant wheel, where he zooms along the ground (or rainbow lines) very, very quickly.

The top screen is used to show health as well as a map. It also shows you how many extra lives you have, as well as the rainbow meter, which is used whenever you draw a line. The bottom screen is where all of the action takes place. Only the touch screen is used, and occasionally the Start button if you wish to pause. At the beginning of each stage, you are dropped into the first area, and your job is to get to the exit of that area. Generally, each stage has three or more areas, and each level (or world) has three stages. At the end of the third stage of each level, there is a boss battle. You get to choose to play one of three different mini-games, and the more you have played one the harder it gets.

There are eight levels total, with the eighth level having a different boss. Each area isn\'t too long; generally not much more than a few minutes. If a player were to simply complete each level and beat the game, skipping all of the extras, it would only take about two to three hours, and probably less for a skilled player. Fortunately, there is an extensive unlockable system to extend the gameplay significantly.

What is the unlockables system, and what kinds of things can you expect?

In each stage, there are three medals to collect. Each level has three stages, to levels one through seven each have nine medals to collect. In addition to this, once you beat a level, it unlocks all three of those stages in the Rainbow Run. Each stage in the Rainbow Run has six collectible medals: three for a time trial, and three for a line trial. Time trials are where you must get through a specific course faster than a set time; there are benchmarks for one, two, or three medals to be awarded. Line trials are similar, except that you must use as little ink as possible, by drawing as few lines as possible to get Kirby to the goal. Medals are awarded similarly, based on how much ink you have left. ** Note: Some may consider some of this information to be spoiler in nature. You have been warned! ** Medals can be spent on various things. Some of these things include songs, different colored inks, and more importantly, increased health, additional special stages for Rainbow Run, and more characters to play as other than Kirby. There are eight of those special stages, and each one of those allows you to get six additional medals. When you beat the game with the other characters, medals are awarded then as well. The boss subgames are eventually unlocked to be playable at any time. A medal can be earned for each. These are extremely difficult, and probably the hardest medals to get in my opinion. ** End potential spoilers ** As you can see, there are quite a few medals in this game. There is a grand total of two hundred and fifty available. This can keep you busy for quite some time unlocking everything. I have unlocked nearly everything (I have over two hundred and forty medals) and I would say that to get everything it should take the skilled player around fifteen to thirty hours to complete, if the amount of time it\'s taken me is any indication. :) To some players, perhaps that amount of time seems short. I don\'t know. It\'s pretty good to me, and appropriately challenging to be satisfying. A few of the medals are extremely difficult to get. I hope to get a perfect score soon, though a small number of them will most definitely take some practice.

Kirby: Canvas Curse uses nice, detailed, 2D graphics. Not exceptional, but very good. It has a clean, cartoony art style. There are no 3D effects present at all, nor are there rotating backgrounds or any other such fancy things. Only the final area has anything somewhat like that. Nevertheless, everything runs at a nice, smooth framerate, with no detectable slowdowns. Some areas have a neat style, especially the seemingly drawn art style of a few of the levels. Also, some of the backgrounds, which you might not even notice while focused on the character and sprite art, are just gorgeous. I wouldn\'t say that the graphics are as good as, say, the Castlevania DS games, but it\'s certainly good for what it is. Another thing to point out is that a lot of the enemies are recycled; there probably aren\'t much more than twenty different types of enemies in the whole game, so you will often find yourself battling many of the same enemies most of the time. This isn\'t really all that big of a deal as most enemies are dispatched in a similar manner, but it can look repetitive at times. Summary: Good, functional, and at times it has its moments. Though in general, I tend to be lenient on 2D games in this category. ;)

What about the sound and music?

The sound effects are appropriate for what they are representing, and with headphones on, have a surprising punch. That\'s one thing that I discovered about this game - if you have headphones with decent bass, the sound is completely different. It does sound good with the built-in speakers, but you basically can\'t hear the bass track at all, at least on a DS Lite. I was surprised to find the music, while always somewhat kiddie and lighthearted, is actually fairly complex with multiple levels going on at once with lots of stereo effects going between both ears. Trust me - find some headphones when playing if you can. I made the mistake of playing most of this game without, and once I plugged them in I found a much deeper soundtrack. Also, attack effects have a punch and \'oomph\' that you just can\'t hear otherwise. Though not every track is like this, I was surprised at how many were. I give this a thumbs up. Without headphones, it\'s just average.

As a whole, this game is fairly clean. There is some cartoony violence, as you bump into enemies and they disappear. You also might find yourself blowing them up in other ways. Nothing is graphic. The main enemy of the game is Drawcia, a witch. She casts some spells at you, and summons some typical Kirby enemies in your battle against her. No regular enemy does any kind of magic. I would say that there is less magic than a typical modern Super Mario game has, if that helps any. Unless you count that magic paintbrush that the player uses to draw on the screen with (the stylus), but that\'s more a plot device then anything occult-ish in my opinion. I would say that the level of violence is also similar to a Mario game, which is to say simple bopping, bombs, and similar things.

I really like Kirby: Canvas Curse. It doesn\'t start out like much, but it sucks you into its unique play style before you know it. It\'s not perfect, though I\'m not sure what I would change to make it better. It\'s certainly a hidden gem that I thoroughly enjoyed playing. If you are the type of person who plays a game to see the ending and that\'s all, then this game may not give you your money\'s worth. On the other hand, if you enjoy seeing all a game has to offer, it offers a fair value. If you don\'t mind the fantastical setting, I think you will likely enjoy one of the more unique takes on the platform genre, in a way that is only possible on the Nintendo DS.