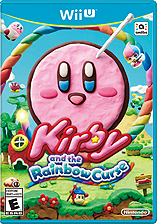 Thank you Nintendo for sending us this game for review!

Kirby and Waddle Dee are hanging out, playing, and having a good time.  They see a strange portal open up in Dream Land, and all of the color is drained from their world, putting them and everything else in stasis.  A paintbrush named Elline appears, and resuscitates Kirby and his friend so that they can together stop Claycia from her evil plan, and restore color to Dream Land.  Thus is the serviceable (but mostly forgettable) story in Kirby and the Rainbow Curse.

I have been a long time fan of Kirby, but my first serious playthrough of a Kirby game was Kirby: Canvas Curse on Nintendo DS, which was a unique and very successful attempt to take Kirby in a different direction.  Instead of having direct action platformer controls like most games, you used the stylus to draw rainbows, which Kirby then followed along as he rolled on the paths you created.  (We have a review that I wrote, though be warned that it does not conform to our modern review standards.)  It was a fun game, if a bit short, with unique controls, art, and play style.

Kirby and the Rainbow Curse takes direct inspiration from that groundbreaking 2005 title.  It is also a touch screen based game, where you touch the Wii U GamePad's touchscreen, and draw rainbows, where Kirby is then expected to follow.  The basic mechanics are almost identical, though this game does seem to be a bit more forgiving on getting Kirby to actually go where you intend him to.  As a 2D side scrolling platformer, you try to get to the end of a level while getting as many treasures as possible on your way there. 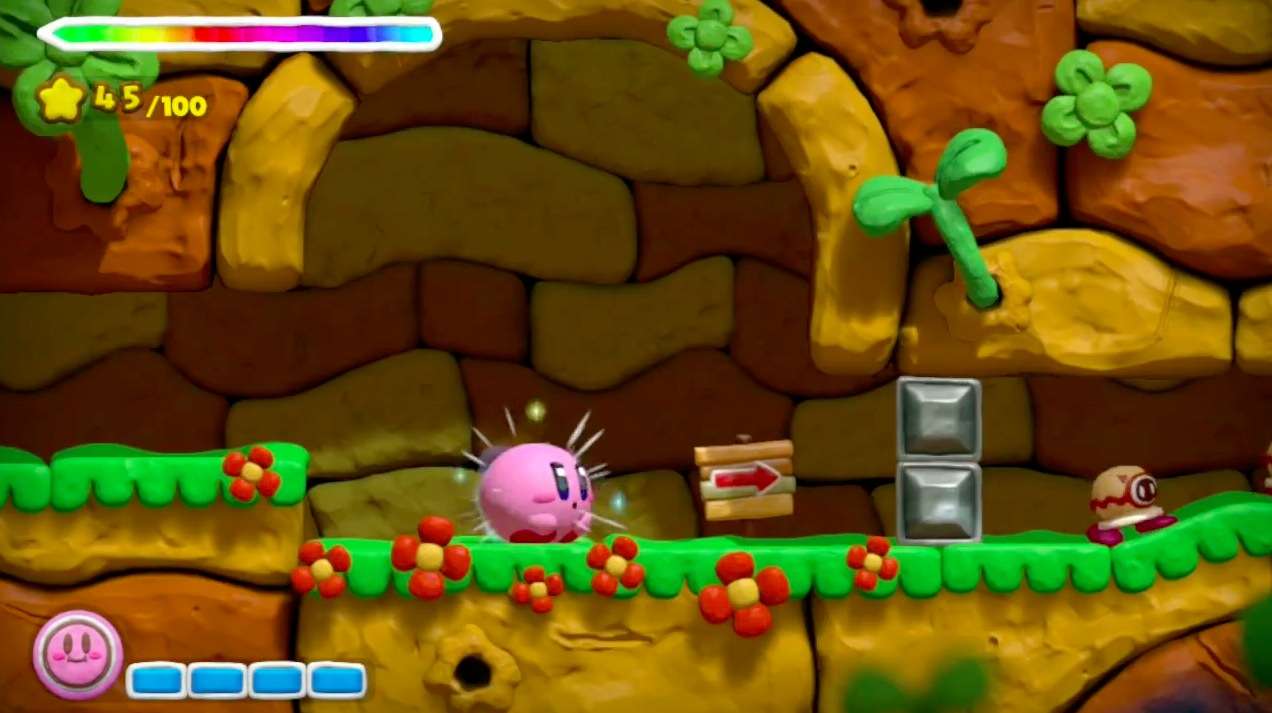 Strong Points: Adorable art style; good difficulty; level design has moments of brilliance; multiplayer actually helps rather than hinders the main player (unlike some other recent Nintendo co-op games)
Weak Points: Not as consistently creative as some other recent Kirby entries
Moral Warnings: Some of Kirby's transformations shoot missiles; enemies poof when defeated

One significant difference is that instead of tapping enemies and gaining their abilities, Kirby never gains any new powers except where the level calls for it, which is much more like Kirby's Epic Yarn (my personal favorite Kirby game ever - review).  In some ways it's good; several of the transformations are good fun for sure, but it does take some of the strategy and variety of the game play away.  If you are getting stuck, trying to find that perfect ability isn't possible; however, if you have amiibos, they can help you.

Kirby, King Dedede, or Meta Knight amiibos can help you once per day, each.  Their powers last only one level and one life, but having the ability to perform unlimited charge attacks (Kirby), having extra hit points (King Dedede), or doing more damage (Meta Knight) can definitely come in handy, especially for bosses.

The level design is in some cases amazing, and in others, average.  I felt like the levels were generally enjoyable, but not always enthralling.  But the ones that were, really surprised me.  The first time I was on the rope hanging basket, or had to blast baddies by drawing lines in front of my Kirby transformed submarine, it was great.  There was one level in particular, late in the game, that I would love to spoil, but suffice it to say, it's brilliant.  Unfortunately, none of them did a very good job of taking advantage of the amazing art style.

Here, in Kirby's Rainbow Curse, the world is rendered in gorgeous HD in a fully claymation style.  It looks fantastic, with intentionally low frame rate animations, and walls that squish as you impact them.  It's really well done, and is definitely one of the highlights of the game.  My only disappointment is that the gameplay itself does not take advantage of this.  In Kirby's Epic Yarn, the world and everything in it was stylized after fabrics.  Not only did it look great, but the game world itself took advantage of this, as you pulled tabs, unzipped zippers, and more.  Unfortunately that is not the case here. 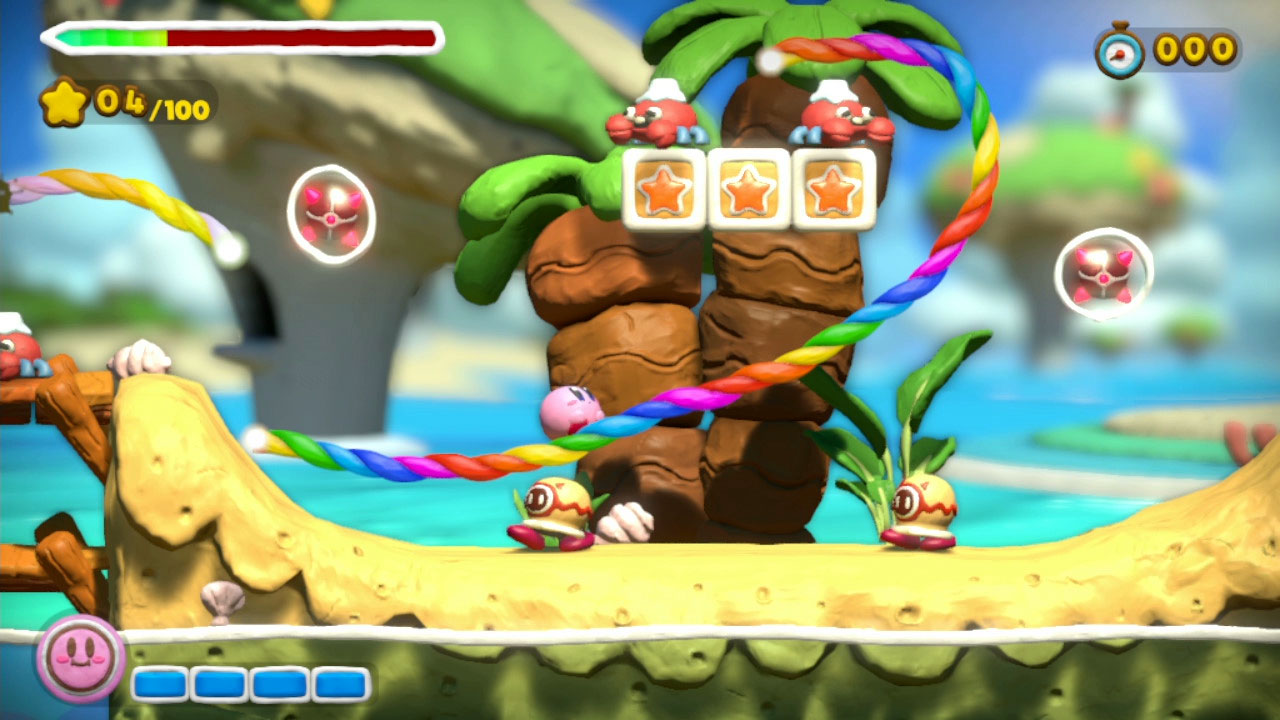 Please don't take this negativity as a slight against the game – not every game can be the best game in every series, like Epic Yarn was to me.  Kirby and the Rainbow Curse is a very enjoyable, and fun game, with great graphics, nice music (again, not Epic Yarn good) and fun multiplayer.

Speaking of multiplayer, this game is one where the additional characters actually help you rather than hinder you if their skill level isn't up to the person with the GamePad.  In many recent Nintendo couch co-op games, if you are skilled, the other players often can mess you up or cause increased frustration.  New Super Mario Bros. Wii/U is a perfect example of this.  In this game, other than occasionally picking up and throwing Kirby, the other players can really help you get the secrets much more easily.  They are controlled using sideways Wii Remotes, so using classic controls, they can turn on a dime.  Kirby cannot, since he rolls. They can also join and drop with the press of a button.

Another benefit for the extra players is that they can enjoy the art much more.  My children, who helped me, could watch all of the action on my large front projection system, while I had to stare at the six inch GamePad screen most of the time. While I'm not knocking the GamePad screen, it's definitely much smaller than pretty much any TV you can buy, and likely lower resolution also.

There is nothing for parents, or anyone else, to be concerned about; some of Kirby's transformations shoot missiles, and enemies poof when they die.  There is some fairy-tale style magic, with the bad guys and the magic paintbrush.  Kirby has always been as family friendly as it gets, and this is no exception.

Kirby and the Rainbow Curse is a charming, fun, lighthearted platformer, with a unique control scheme and art style that is sure to please.  It would only be possible on a touchscreen system, and it's always great to see Nintendo make something unique in this way.  The adventure is a little short, at less than ten hours, though there is plenty to unlock for completionists.  Despite that, there is a fair amount of challenge.  If you are a Kirby fan, or enjoyed Canvas Curse, there is plenty here to enjoy.  If you are looking for a game that breaks the mold (pun intended!) from more typical platformers, I'd recommend you take a good look at Kirby and the Rainbow Curse.