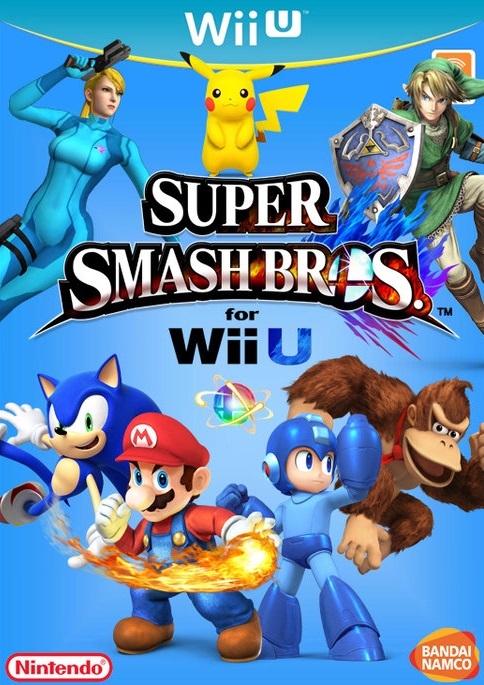 The graphics in this game are just gorgeous. Many of the characters look better than ever. For example you can see individual hairs on Donkey Kong and scales on Bowser but they both look natural...for a cartoon ape and a cartoon lizard. Unfortunately there is less variety in the stages than in the roster. Many of the stages follow the template of a fighting platform in the middle of the screen and a scrolling background. This template lends itself to balanced gameplay but sacrifices diversity. As someone who enjoyed the original Poke Floats I wish there were more unique battlegrounds. The soundtrack is also amazing but given the series I would be surprised if it wasn't. The menu system however is terrible. Getting from one game mode to another takes way too many menu screens and the grouping of features seems almost random. Thankfully after a few hours I got used to the confounding system and now it's less of an issue.

I really love the roster because there's a huge variety of play styles. There's fast characters, slow ones, projectile based, aerial specialists, aerial challenged, offensive, defensive, hybrid, almost everything you could want.  There are also a lot of clones on the roster including Dark Pit, Doctor Mario, Lucina, and others. None of the clones have the exact same move set but some, like Dark Pit, are very close. A few veterans are missing from the roster, most noteably Ice Climbers and Snake. These two characters had very unique movesets and it's a shame to lose them. The Ice Climbers situation is especially frustrating because it was a design decision to leave them off the roster because of technical difficulties in the 3DS version. I'm hoping that they can make a return as DLC later on. There is a good number of new characters for this version too. Counting the three Mii characters individually there are 17 newcomers. My favorite ones are Bowser Jr., Duck Hunt, Megaman, and Rosalina and Luma. Each of these characters bring something new to Smash. 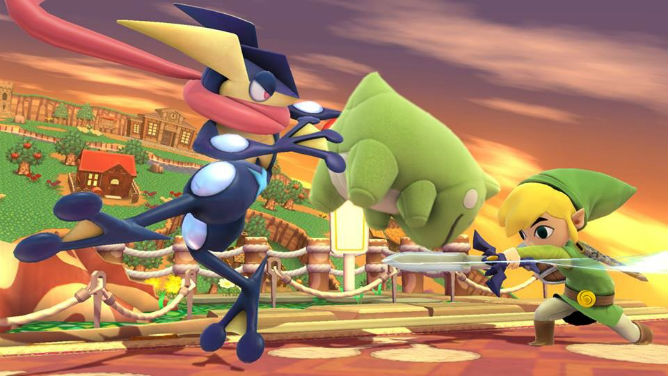 Super Smash Bros. for Wii U just feels good to play. It's really hard to put into words but the controls are tight and the framerate stays locked at 60fps, even in 8-player Smash. There have been tons of changes to returning characters; some of them, like Link, feel brand new. Even though more characters are competitive now, my main ape Donkey Kong still seems underpowered. A lot of the new items are great additions including the Master Ball, which guarantees a Legendary Pokemon and the Ore Club, which shoots a tornado. The Beetle and Galaga Boss also deserve mention because if a character is caught by one of these they will be lifted up and out of bounds.

There is a depth to the gameplay that a lot of players miss. It's fun to just jump around using specials, smash attacks and grabbing items but there's so much more to the combat. There are sweet spots for certain attacks, different options for coming up from the ledge, certain attacks that combo together, extra attack damage at high percentages and tons of other less-obvious mechanics. All of that is before getting into the advanced techniques used in tournament play. Many of these mechanics have been around for several iterations of Smash but in Smash Bros. for Wii U they're trying to teach these mechanics with the tips in loading screens (tips can also be viewed in the menus). How far down this rabbit hole you want to go depends on how badly you want to beat your friends.

All of the multiplayer options you'd expect from previous Smash Bros. games are present. Online play returns from Brawl but now there's For Fun and For Glory modes. Both have Free For All and Team Smash-however those are limited to 2 minute timed matches. For Glory does feature 1 v 1 matches where players have 2 lives each though. I use a wireless internet connection and I've found the online to be unreliable and often full of lag. The best new addition is 8-player Smash. There are new, bigger stages specifically for this mode and it restricts play to them. It is just as crazy and chaotic as you can imagine. The only downside is that any amount of players beyond 4 requires use of 8-player Smash mode. I found some of the stages to be too expansive with only 5 players. The worst new addition is Smash Tour, which is a hybrid Smash Bros. and Mario Party. Up to 4 players choose a Mii and simultaneously roll dice and move along a game board collecting characters and powerups. If two players collide then a Smash Bros. match starts. Players use one of the characters they have acquired on the game board as well as a choice of one power up. Smash Tour is something I played a couple times to experience and then wondered why it was in the game. I played it by myself against 4 NPCs; I didn't have a bad time but I'm not exactly itching to play again. I'm sure it's more fun with more people, but if I have others around why wouldn't I just play Smash? 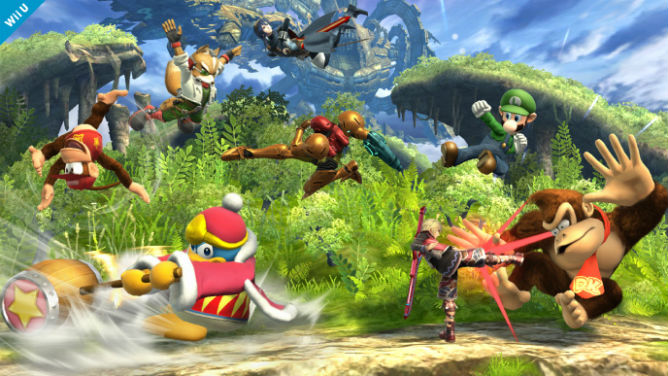 Since Smash Tour can be played solo it's a good time to talk about the single player content: it's lacking. There's a ton of different mini games but nothing I would call "rich, single-player experience." Someone could ask, "Why are you expcting single player content in a party game?" Super Smash Bros.: Brawl had the fantastic Subspace Emissary and I was expecting something on that level. In Smash Bros. for Wii U there is still: Classic mode, All Star mode, Homerun Contest, Smash the Targets, Multi-man Smash, Events, Challenges and now Trophy Rush and Master Orders. As I mentioned earlier though these are all just mini-games and in some cases are worse than previous installments. Classic mode feels especially phoned in; many times when I play Classic I end up with 6 rounds of  8-player Smash then the Mii horde fight and ending with Master Hand. I have no desire to get the "Beat Classic mode with all characters" Challenge.

There's a lot of peripheral integration with Smash Bros. for Wii U. NIntendo developed a special adapter so that Gamecube controllers could be plugged into the Wii U. These are very hard to come by however. They also made new character- themed Gamecube controllers that could be plugged into a Wii Remote. Most notable of the peripherals are the Amiibo. Nintendo is using Smash Bros. to debut their new hybrid toy/downloadable content. After buying several Amiibo my work desk is much happier. My Smash Bros. experience however, is largely unaffected.  You can scan your Amiibo on the gamepad and then they can fight and level up in Smash Bros. They will learn fighting styles based on who they fight against. This functionality is not worth the price of the figure. I would only advise buying an Amiibo if you like how it looks. The most fun I've had with them is when my friends and I pool our Amiibo into an 8-player Smash and cheer on our figures. I had a ton of fun yelling and rooting for my Link Amiibo named 2Chainz.

As far as content goes Super Smash Bros. for Wii U is  very clean for a fighting game. With all the ridiculous action and hilarious facial expressions it's hard not to smile at the cartoon violence. There are a few costumes that are tight-fitting or revealing including all the ones for Zero Suit Samus and one for Shulk. There is some crude humor in the game as well (e.g. Wario has a flatulence attack). There are some religious references in that Pit and Dark Pit are angels and Palutena is a goddess. There is a lot of magic used, mostly by Robin from Fire Emblem: Awakening, but it's not really explained.

Super Smash Bros. for Wii U get's all the essentials right and only falters in a few small areas. Nintendo successfully struck a balance between the casual crowd and the competitive scene. The combat supports both styles of play and everything in between. I was surprised to see that Nintendo is actually sponsoring the upcoming fighting games tournament Apex. The company has had a dubious past with the competitive scene and it's nice to see them embrace it. Super Smash Bros. for Wii U has already supplanted Mario Kart 8 as the go-to game when my friends and I are together and I expect this to continue for a long time. At least until Mario Party 10 is released and we all stop talking to each other.