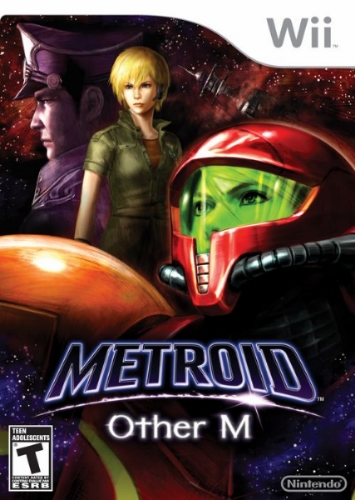 Metroid is iconic to Nintendo gamers, and perhaps gamers in general. I grew up playing Super Metroid with my friends, and searched out a copy of Return of Samus with an exuberance akin to that of Christmas morning. It seemed so mature and dark; a lone superhero crawling through a planet full of nasties in the endless pursuit of  galactic safety.

Metroid: Other M opens with Samus Aran (heroine of the series) in the Galactic Federation (GF) medbay, shortly after the events of Super Metroid. After leaving the GF space station (doubling as the training course for the player) depressed over the death of the baby Metroid she once had rescued, Samus aimlessly drifts in space until receiving a distress signal codenamed “Babies Cry.” This is poignant given recent events, and she takes it as a sign, darting off in the direction of the signal. Arriving at the large vessel named “the Bottle Ship,” Samus finds that events have taken their natural  course; that is to say, the crew is dead, the ship is swarming with monsters, and a troop of GF soldiers are exploring the ship for unnamed reasons. Oddly, they weren't wearing red shirts...

Unlike the other titles in the series, I believe Other M was meant to be story-centric, exploring who Samus is outside of an intergalactic bounty hunter. Her past relationships and pre-hunter life are explored in this game, providing a bit of heart to the armored heroine. Other M uses impressively long CGI sequences (upon completing the game, they're are unlocked as Other M: The movie) to carry the story, and they're beautifully animated, if a bit cheesy at times (GF troops apparently were trained by Power Rangers). That tends to go for the story overall though; a few moments had me shaking my head. The voice-overs are fairly good, even if Samus sounds too much like a teenage girl to be a mature, planet-saving heroine. 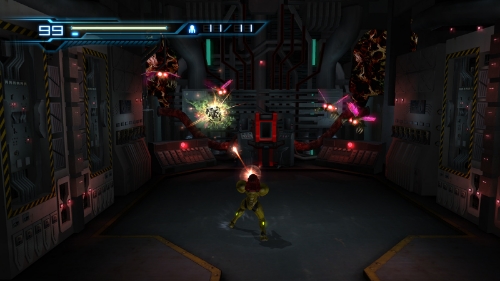 If you've played Metroid: Fusion, you'll recall a mysterious man named Adam, whom Samus knew from her past. Other M seeks to explain who Adam was, and what he meant to Samus; it is not without its flaws, though. I don't want to portray it as bad. It's interesting, and it's fairly unpredictable; but it is also very similar to Metroid: Fusion. By similar, I mean some events, locations and monsters were directly pulled from that game; one boss and its habitat are an exact copy, to the extent I could predict upon entering the room what I would be facing. After the initial distaste, I grew to appreciate this because, even if I disagree with the design choice, it's clear Team Ninja loves Metroid. They paid homage up one wall and down the other, and still pulled off a few surprises along the way (including some new Zebesian wildlife that I would label “downright cool”).

The main problem is the way the story is presented. There are enough gaps and holes to make Swiss cheese jealous, leaving much of it up to the player to fill in. Questions are posed that remain unanswered, and not in the aggravating way authors use in an attempt to build mystery, but plot driving answers that actually matter.

Graphically, the game is one of those scant examples of the Wii's true power. It's no wunderkind when compared to its high-def cousins, but Other M pushes Nintendo's little box to the limit. The various terrain you explore is highly detailed and feels alive, if static. Snowy rooms are crystalline and fluffy, and the fetid jungle is covered with flora both strange and alluring. I really have no complaints here, aside from a certain jaggedness resulting from playing the game on a HDTV. I also recall some minor slowdown when there was a lot of action on screen, but nothing severe.

Though significantly different from the previous musical scores, Other M continues the sweeping highs and lows of the series' typical melodic compositions. From the tinkling chilly sounds of the ice world, to the remixed “Norfair” theme heard in the fiery realm, the music accentuates each worlds' characteristics. The classic Super Metroid theme song has been updated for Other M into a more haunting, yet incredibly nostalgic tune for those who have played the original. In concerto with the hideous screams of sundry alien creatures, the soundtrack helps complete the detailed world team Ninja crafted. The game was also incredibly fun to play with a surround sound system.

Classical Metroid has always been about exploration: look around until you cannot anymore, then retrieve an item that will allow you to reach new areas to explore. Though I appreciate the return to a semi two-dimensional perspective (the game is third person, but seen mostly from a side scrolling view) like the originals, unlike them Other M is stunningly linear. You can backtrack to some extent and retrieve items from the few open areas, but the whole station isn't unlocked until you complete the game. The main reason for this is that you technically never find any weapons; Samus has them already, but they've been disabled under GF orders until the mission requires it, slowly becoming unlocked as the story progresses. Not only is this a cheap way to control your progress, it is an incredibly sticky concept to get your head around. If you were surrounded by hideous aliens and an unknown enemy, would you ignore the powerful parts of your arsenal just to follow orders? 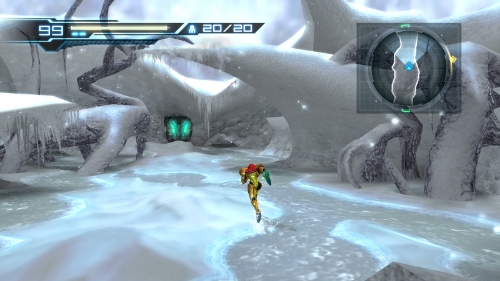 However, you can pick up the series' typical fodder along the way: Missile expansions that increase the amount of missiles you can carry and energy tanks which increase your health. New to the series are energy “parts” (which function like the heart pieces from the Zelda games), and charge boosters, which decrease the time it takes for your beam weapon to charge.

Another problem is the way health and missiles are restored: instead of killing enemies or breaking objects in the environment to find energy or missile packs, when the commodities get low enough you can hold the Wii remote vertical and use “focus” (otherwise known as holding the A button) to restore them. I'm not really sure how I feel about this; though it's nice to be able restore your missiles at any time, I only died in the game when my health was low during a boss battle and I got hit several times before the focus meter could fill.

This mechanic (setting aside the unlimited missiles and super missiles) felt very cheap at times. There was very little threat or fear; if my health dropped low, I only had to find a safe room and recharge it. It was also incredibly frustrating to get killed in a boss battle because of it. Thankfully, E-tanks have returned, which increase the amount of energy restored per focus session. Still, even without it death holds very little threat; if you die, you'll simply restart at the beginning of the room that killed you, including boss battles.

Whether leaping high into the air, running at sonic speeds through water, or curling into a ball and rolling through tunnels, Samus has always been agile; Other M ups the ante, and takes her skills to a whole other level. By pressing one of the directional buttons shortly before an enemy attack hits home, Samus will flip out of the way and gain a fully charged beam. This technique has to be mastered, as it is as the core of the game's combat system, and you will rapidly die without it. You never really gain a huge increase to your armor strength, meaning that even with Samus' at her strongest, you'll still take a beating from the weaker critters.

Combat is very cinematic; much like another famous series belonging to Team Ninja. In fact, in my more cynical moments, I feel comfortable calling this game Metroid Gaiden. From the action kills which show Samus leaping upon and splattering smaller enemies, to the full blown boss battles when she scales giant creatures like buildings, Samus very much moves like a ninja. After the first few grumbly hours, I rather enjoyed leaping upon giant bugs and exploding them, even if it wasn't what I was accustomed to. The dodge mechanic, though it requires some rather specific timing, works well, even with multiple enemies, and the action kills, in which you leap upon a large enemy to kill them quickly, were also very much appreciated given how hard they are to kill without it. The game lasted me around nine hours, and with only concept art to draw me back in, I feel it will stay that way. 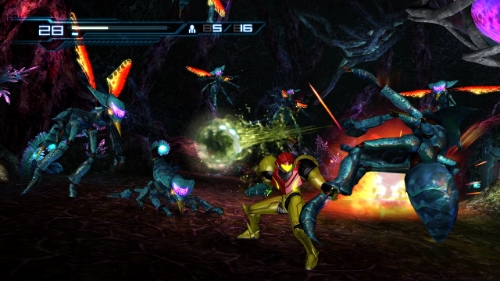 The control scheme is fun too, since it reminds me of playing a classic title; you hold the Wii-remote sideways, moving Samus with the directional pad, jumping and shooting with the 1 and 2 buttons, respectively. Samus will shoot the closest enemy in the direction she's facing, or you can aim the remote at the TV to shoot a specific part, or lock onto enemies. I never really had a problem with the loose targeting method, and as I mentioned, I enjoyed the experience overall. Dodging gets tricky when you're trying to recharge your health or missiles, to say nothing of attempting to dodge an attack while aiming the remote at the screen.

Whether green or purple, slime and goo will either burst in a cloud or splatter away from vanquished enemies. There's one critter in particular which bleeds copious amounts of green slime (in cut scenes, if not in battle), and at one point in the game you'll come across a room coated in the stuff. You never fight humans, but you'll see a few dead ones that have been ravaged by a mysterious creature, if not graphically.

Content wise, I would not consider violence to be the biggest issue. Samus is wearing her traditional blue skin suit underneath her power armor, and it's just as skin tight as it usually is. You see it frequently in this game, in cut scenes or upon death. Samus, near death, has a vision of herself first as a baby, then as a younger version of herself, naked both times. It's not explicit, as she is seen at an angle curled into a fetal position. Another female character in the game is seen nude, through silhouette and again from the front. What is seen of her (an android) is inexplicit and statuesque, but clearly female.

In the end, if I had to choose a single word to describe Other M, it would be “different.” From the linearity to the focus, Other M is a radically different take on the traditional Metroid style. If I could use an entire sentence, I would probably say “Well, that was a thing.” You see, I remained somewhat lost after the game's completion. Story wise, I wondered how much homage can be paid to a series before it becomes a redux, and how much story can be left to the player to decipher before it becomes difficult to experience. Gamewise, I was thoroughly entertained by Other M, and would tentatively recommend it (I'd 86 that tentative, were it not for the odd and awkward nudity) as an offshoot in the Metroid series, because the game was very much like a Ninja Gaiden title set in the Metroid universe, however you may feel about that (as I said, I was confused). At the very least, it's a fun time for fans and at $10 retail, hard for me to hate on very much.