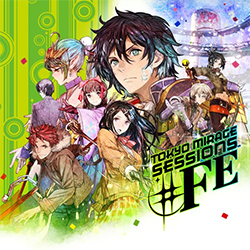 Tokyo Mirage Sessions #FE (TMS) is a crossover of two, arguably three, major JRPGs including the likes of Shin Megami Tensei, Fire Emblem and (debatably) Persona. This game was developed by Atlus and published by Nintendo after a Nintendo producer had expressed their desire to Atlus in 2010 to collaborate on a game. Atlus expressed their apologies and had said that they were simply too busy at the time to take on such another big project. After a year or so, Atlus had contacted Nintendo asking if they were still interested in the project, highly enthusiastic about the chance to work together. The product, Tokyo Mirage Sessions #FE, had begun development. Fast forward a few years, and this game was released in Japan with high anticipation for a western release. Six months later we have the game Tokyo Mirage Sessions #FE for the Wii U in North America. Not without some localization controversy of course! When the game was being localized from Japan to the Western audiences, Atlus-- the company responsible for the localization-- had upset a group of people having changed a bit of the cutscenes by adding to the video or images overtop females in several areas that was deemed a little too immodest for Western audiences.

But, the real question on everyone's mind, however, is if this amalgam of game IPs creates a solid and enjoyable product. The short answer to that question is yes. The long answer is the reason I'm writing this review. Players who have played Shin Megami Tensei, Persona, and Fire Emblem will be able to pick out what was borrowed from which game rather easily, almost like an Easter egg hunt. The art style takes more from Persona, with background characters being merely silhouettes with different basic colors. The leveling and stat system is from Fire Emblem, and the level up jingle is the same. It feels like a reward for knowing where it comes from. The combat system merges the rock/paper/scissors mechanics of Fire Emblem with the elemental weaknesses of Shin Megami. The combat is fun, flashy, and colorful. My two minor nitpicks are that during combat there is ambient dialogue that only the inhumane amount of hours I spent watching anime have helped me understand a small portion of what they were saying. The other minor nitpick is when a member of the party falls in combat Itsuki will shout their name and frown-- only to go back to having a smile on his face after the phrase is spoken-- just really weird.

The game flips between anime cutscenes and 3D models to tell its story, with most of the game usually handled through the 3D models. In this game, the player explores the world through the player-character Itsuki Aoi. Itsuki is an average high school student who just happens to be friends with Tsubasa, a girl who was the only survivor to the local tragedy where everyone just magically disappeared. I won't get into spoilers, but inevitably the tragedy comes back to haunt his childhood friend and he embarks on the quest to save her. This is where he meets his Mirage Partner, Chrom (yes, that one) and with his help they manage to save Tsubasa. These Mirage Partners combine with Itsuki and other characters to create "Carnage Forms"-- the combination of the Mirage Partners and Mirage Masters that allow Itsuki and crew to fight in the Idolaspheres-- which is how Itsuki and his friends navigate and survive through the Idolaspheres. Mirage Partners are where the player may hear, and see, some familiar faces from the Fire Emblem universe. 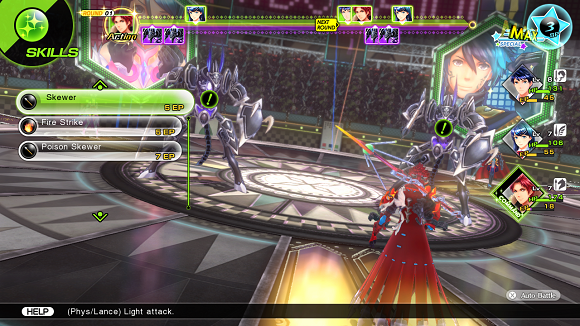 The Idolaspheres are where the meat of  the game occurs. These multi-floored dungeons feature puzzles for advancing further down the game, where mirages can appear and cause several encounter types. Red Mirages are considered normal difficulty and are the most frequent encounter type. Savage Mirages are purple, and are much more difficult and, as such, award more if you manage to beat them compared to the Red Mirages. Then there are Golden Mirages, which are relatively moderate in difficulty but drop much rarer items for the player's party.

Speaking of rare items, in order to obtain stronger weapons, players will have to go into dungeons and encounter certain monsters that will drop items that can be used to forge Carnage (what the game calls its weapons). After collecting the appropriate ingredients, the game notifies the player that there is a new Carnage Form or Radiant Unity upgrade ready to be forged. It is through mastering weapons that Itsuki and his party, or The Cast, will be able to acquire their skills. Radiant Unity is the a way for the party to learn new passive abilities varying from surviving a potentially lethal hit to having a chance of not losing an item when the item is used, progress in the side stories and, in some cases, the main story as well. Running back and forth between dungeons and the Bloom Palace does get irritating, however, so I personally recommend doing it every time Itsuki and crew need to get healed.

The Cast can be changed on the fly within dungeons, and even in the middle of combat-- Itsuki being the only party member that cannot be changed. This was slightly irritating as Itsuki uses a sword and is weak to Lances, which is what a lot of enemies have been using. Of course the game balances his early weakness by giving him an electric attack, which most lance users, early on at least, were weak against. However, it is irritating to be unable to switch him out as I've already gone through a few mobs where he's not good against anything and is weak against everyone. 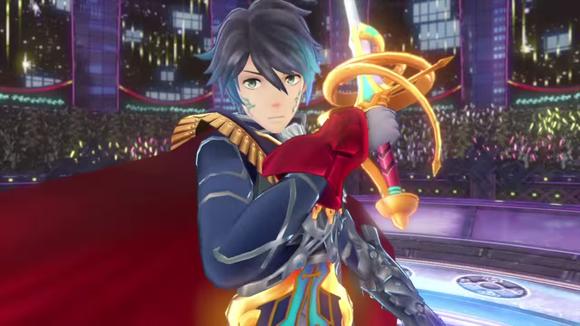 One of the more entertaining bonuses to pursuing the side quests of Itsuki's fellow cast members is the Ad-lib. Ad-libs are random events that occur during a super-effective attack that use an outfit from a cast member's side quest. These usually result in humourous additions to combat, they also do more damage than regular super-effective attacks making their appearance all the more satisfying. Another innovative feature this game uses is the Wii U Gamepad's texting feature. This is where the characters talk with Itsuki about the current main story, the current side story, and by letting him know if there is a new upgrade waiting for them back at the Bloom Palace.

For a JRPG, the game doesn't sexualize women as much as I thought it would. Aside from the Manager who is one weak button away from a terrible wardrobe malfunction and the first villainess, there is not much worse aside from what one would experience by going to the local public pool or public beach. The game's real moral downfall is the uses of internet slang blasphemy, the occasional outright blaspheming, and PG-13 Movie swears! However, some of the internet slang had been used by a character who did say "Oh my gosh" earlier in the game so one could argue that she did not mean that in the blasphemous way. The game does have an odd occurrence regarding an LGBT relation; it is played for laughs as the high school girl has a love for what she knows to be a computer program and that it "Transcends gender and all dimensions."

If you don't mind the language, the clothes, or the fantasy violence, then this game is a strong entry into the Wii U Library and a must have for any JRPG fan. The turn-based combat is enthralling and entertaining, this coming from someone who usually [i]dreads[/i] turn-based combat. The story is engaging, if slightly predictable, the Mirage characters fun and true to their Fire Emblem iterations, the new characters fun and lovable, and is a strong new IP for Nintendo that is worthy of a sequel on the NX.