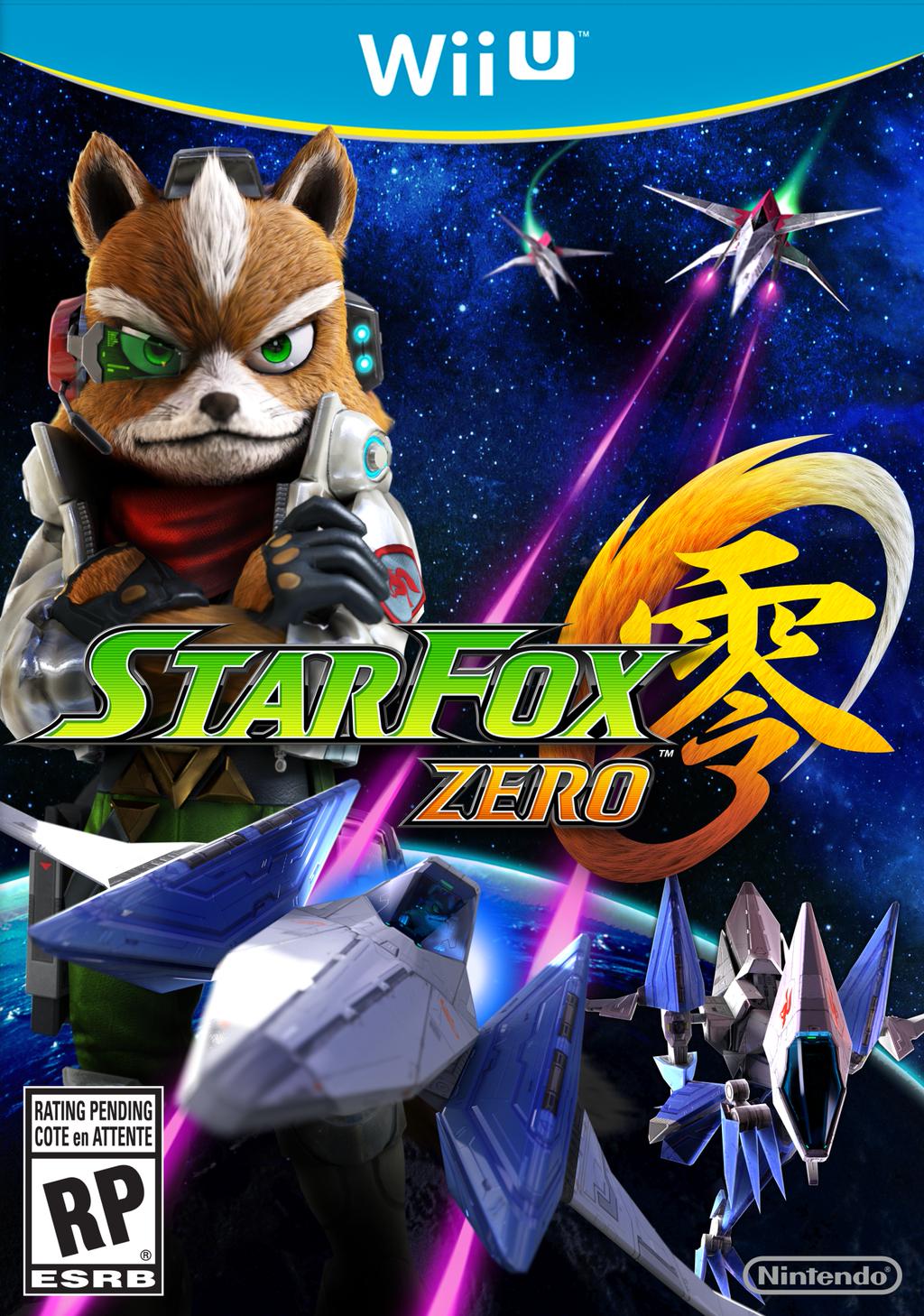 Starfox Zero is the latest offering from the Starfox property by Nintendo. It plays very much like the classic SNES Starfox game and in fact, feels very much like a remake of it. Similar story, controls and visuals make the game play like an update. If you enjoyed Starfox for the SNES or StarFox 64, this is a good buy.

The story begins on Corneria, the homeworld of the Star Fox team.  After being attacked by the forces of Andross, Fox McCloud and his team set off to bring the fight back to the enemy, liberating worlds, destroying space fleets, and encountering old enemies along the way.  Again, very similar to the original.

For most of the game the player pilots an Arwing, the iconic transatmospheric fighter used by the StarFox team in previous iterations of Star Fox.  The weapons systems are familiar also, being a combination of blasters and Nova Bombs (limited supply).  Conceptually, the controls are also similar with special maneuvers like a loop-de-loop which can avoid enemy fire as well as shake enemies off the tail and the aileron roll.  It does have a new feature: it can transform into a land-based, birdlike mode which allows the player to walk around at ground level. This is useful when it's necessary to stop completely as the Arwing must remain in constant motion when in fighter mode.  Some levels require the player to move vertically upward in a way that would be impossible for the Arwing in fighter mode, and this mode is also very useful in other missions when the player needs a stable platform to fire from rather than strafing.

Some missions also use the Landmaster, a hovertank like vehicle, and these missions are entirely ground based, though this vehicle does have a limited ability to fly in order to get a better angle when firing on some targets.

Finally, there's the Gyrowing which is a twin rotor helicopter-like vehicle.  This vehicle is equipped with a remote control robot that can be lowered by a cable to perform tasks as well as grasp items to be lifted and carried by the Gyrowing.  A downward facing camera allows the player to precisely aim where the robot needs to be, or to drop payload.  When the robot is out, the GamePad display shows the view from the robot's perspective to help with controlling it.

All these different vehicles do add some variety to the game but with the controls being as complex as they are, the player has to get used to them all over again every time it changes.  Thankfully, there are tutorials and practice missions to help the player get used to the various controls and vehicles in the game.  I found myself using them often, especially when there was a significant time gap between gameplay sessions.

As in previous iterations of this game, the player pilots Fox's vehicle as he leads the team of pilots to complete the various missions to advance through the game.  The story is on rails without any decision points other than difficulty level. 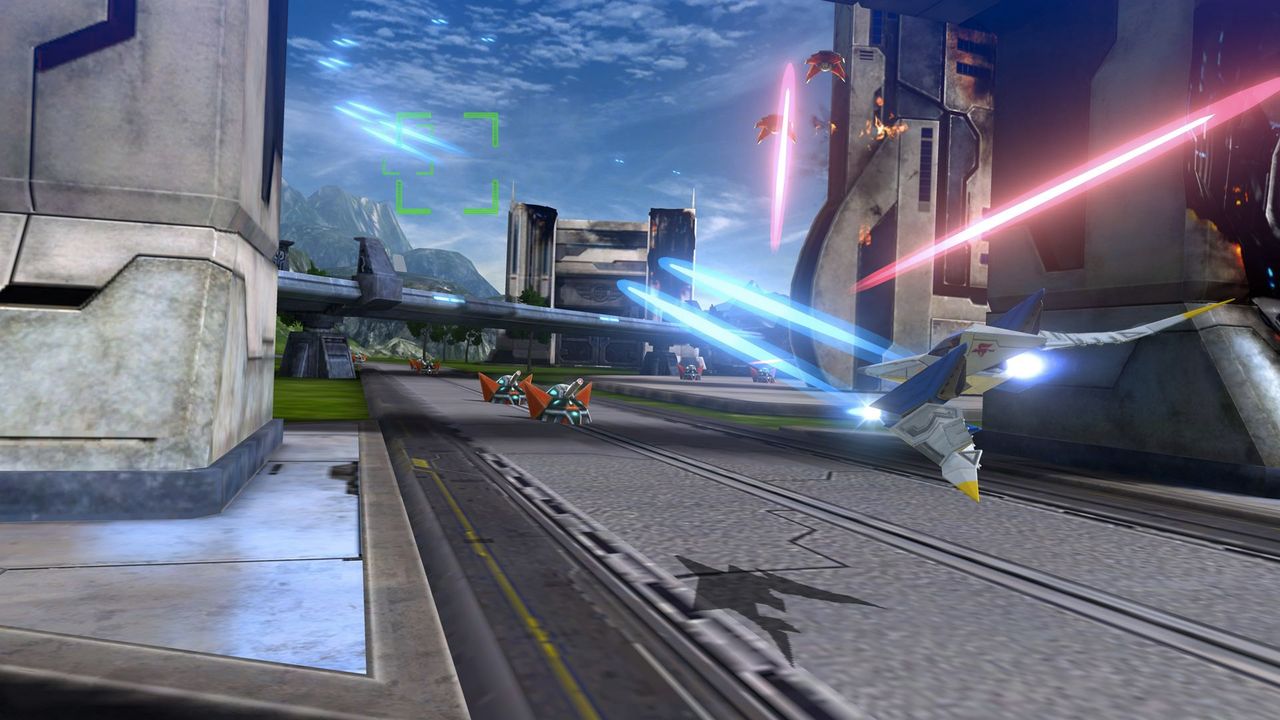 The Wii U GamePad is used to control the game in single player mode.  On the main screen is the external view of the vehicle while the cockpit view is displayed in the GamePad's touchscreen.  The various GamePad controls are used to steer and deploy weapons, but the physical orientation of the GamePad is used to control the gunsight when aiming at small or difficult targets.  The player can instantly recalibrate the center point of the gunsight at any time and I found myself doing so often.  For such a simple game, there really is a huge number of controls and for me, this is what differentiates it from the original Star Fox the most.

When using the gunsight the player has to look through the cockiptview in the GamePad.  This sounds really innovative, and it is different... but it does mean having to take your eyes off the main screen to look through the sight which can be a real problem when trying to avoid collisions while simultaneously trying to destroy a target.  It also means the game isn't playable in single player with a regular Wii Remote.

I honestly had trouble keeping up.  The features are all clever ideas but each new innovation feels like it's just being tossed into the stew.  Yes, it allows for more flexibility and maybe even realism in gameplay but it doesn't feel that coherent.  Being able to independently aim the gunsight isn't a new idea but having to divert your eyes from the screen as well as the frequent need to recalibrate the sight control means managing the ship actually becomes harder than fighting the bosses.  It felt a lot like the developers were just trying to think of ways to use as many of the controls as possible.  A feature that I both like and hate is the ability to visually lock onto the currently selected target which allows the player to keep their eyes on the target at all times.  This is great for high altitude dogfighting.  It's terrible when there are things to run into.  With the player's view locked on the target it's easy to fly the fighter into obstacles because you're not looking at what's in front of you.

Realtalk:  I never really did get used to these controls and as of the time of this writing I've gotten up to the final boss battle of the game.  I've heard that some players are able to adjust to the controls and find them very enjoyable to use.  Others, like me, find the control system so awkward that it takes away from the fun of the game.  Now, I'm a man of middle years so maybe my age has something to do with it but I had my son come over and play a few missions with me in co-op mode as both the pilot and the gunner and he didn't like the controls either.  In fact, this was enough of a problem to turn him off of the idea of buying his own copy.  So I guess the bottom line is that your mileage may vary.

If you've got the Fox or Falco Wii characters you can use them to get access to the classic Star Fox skins for your Arwing.  The Arwing looks, plays and sounds exactly like the original game though everything else remains the same.  Doing so also slightly modifies the stats for the fighter.  I played using the Fox Character for a session or two and while the nostalgia of piloting the classic Arwing look was fun for about five minutes, it gets old fast when the rest of the game still looks great and you're flying around in a collection of polygons. 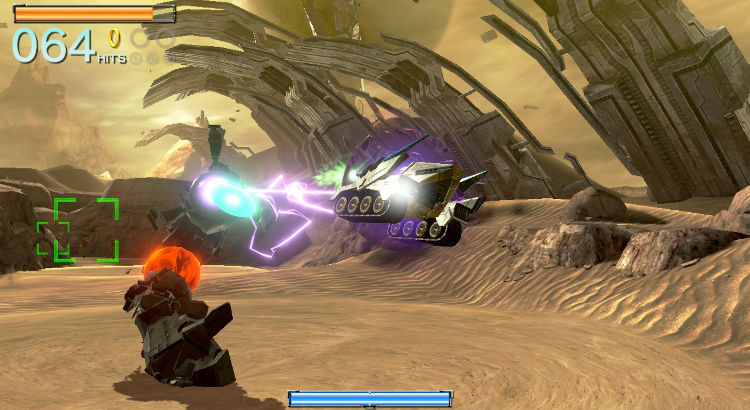 There is a multiplayer co-op mode though it does require a Wii Remote to play it.  One player takes on the piloting duties and relies on the main screen.  The second player is the gunner and uses the GamePad's cockpit view to aim.  This means teamwork and communication are essential.  During gameplay we did encounter some trouble.  At one point while my son was piloting he found he could no longer control the Arwing.  It was just flying in circles.  We had to pause the game, pull the batteries from the Wii Remote and put them back in, then resume the game to clear it up.  To be fair, it's possible that this wasn't the game's fault and that there was something wrong with the Wii Remote.  Also, during one battle, I (as the gunner) was able to see things through the GamePad cockpit view that were not visible on the main screen so my son didn't know about them.  This wasn't a game glitch, it's designed that way, but the problem was that I had to focus completely on the cockpit view so I didn't realize that the main screen was showing something different.  Of course, he had no way of knowing this either and we got killed several times before we realized the issue.

Lastly, the co-op mode is a fun way to have someone join the game with you or help you out but it feels disjointed from the game's story.  You have a pilot and a gunner, but it's still just Fox McCloud alone in the cockpit.  When my little daughter asked us  which one of us was Fox, we had to say "both of us."  That isn't a gameplay problem, it just breaks the immersion if you're into the story.

The graphics are great, but then it's hard to be objective and compare them to other contemporary games when the natural comparison is to older Star Fox games.  The facial movements of the characters when they speak is a bit stiff, and it's hard to tell whether that's weak CG animation or meant as a deliberate shoutout to the old animation from the SNES game.  In either case, it feels like a shortcut.  The combat animations are suitably smooth and easy to follow.  The cutscenes seem to use the same engine as the actual gameplay so the transitions flow cleanly.  I didn't notice any graphical glitches or issues during gameplay, which is impressive considering some of the missions require the player to maneuver inside of tight spaces where graphics clipping could be a problem.

I liked that some of the sounds are taken directly from the older iterations of Star Fox, and some are new.  For example, the sound effects of weapons fire are new but still sound familiar while the "good luck" sound as you start a mission sounds exactly the same as the original Star Fox.  The sound effects in general are adequate for the game though not particularly memorable.  The characters' speech uses human actors and is clear and easy to understand.  There weren't any audio issues noticed during gameplay.

The game plays smoothly and didn't crash or freeze when I was playing in single player but we had issues with the Wii Remote though it's likely that had nothing to do with the game itself.

This game is primarily aimed at the younger crowd, so morality issues are minimal.  Of course there's animated space combat violence, and the only part that made me pause was Fox's scream when his fighter is destroyed.  It's surprisingly disturbing at times.

There are no language issues and no sexual content.  There's very little occult or supernatural content beyond the obvious presence of a variety of alien species, though that's not problematic in a moral sense.

The final mission does have the ghost of Fox's father appear to lead him to the final boss battle.

Fox's squadron represents the honorable and courageous Star Fox team and thus act morally and ethically in defense of their homeworld.  The player isn't required to do anything unethical to accomplish the missions other than to destroy enemy vehicles which are usually piloted.  I did downgrade the game on violence slightly because when enemy vehicles are piloted by important enemy characters, they tend to cry out or speak their last words when they're destroyed.  That means they aren't ejecting and are certainly dying in that fireball or the wreckage on the ground.  That might be a little intense for some of the youngsters.

Overall this is a fun game and isn't too difficult to work through, though at times working the controls are a greater challenge than fighting the enemy.  I do recommend it for fans of the Star Fox series of games, especially if you would enjoy a more fleshed out backstory and more characters.