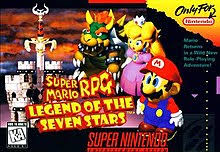 Super Mario RPG was created as a joint production between Nintendo and Square (now Square Enix.) After the flop that was Final Fantasy Mystic Quest, Super Mario RPG was created to combine the elements of a role playing game along with the familiar storyline and controls of the ever-popular Mario series. For the most part, it worked. The game begins when Toadstool is kidnapped by Bowser while playing with butterflies. Mario then goes to Bowser's Keep to rescue her. But even as it starts, you notice this isn't a typical Mario game. Instead of stomping on enemies, you enter into a battle with them, similar to Final Fantasy, where you command Mario and the enemy also has a turn. Just as you are about to rescue the princess, a sword falls from the sky and sends Mario, Peach and Bowser in three separate directions. Thus begins Super Mario RPG.

The game is quite a bit different from a typical Mario game in that this is not a side-scroller. Super Mario RPG takes place in the isometric viewpoint. Another aspect of this game is the previously mentioned turn-based battles, a la Chrono Trigger or Final Fantasy. In battle, you are given the option to attack, to defend (or run from battle, if you wish), use an item, or a special attack. As with most RPGs, the characters attack with weapons and you can upgrade them as the game progresses. Special attacks are the equivalent of magic or summoning in the Final Fantasy series. They are more deadly but also more costly, as they drain one's flower points, which is the equivalent of MP in a Final Fantasy game. Each character has unique battle moves and functions. Mario's attacks are similar to what he would use in any game- his special attacks are jumping and fireballs that get stronger as the game progresses. Mallow, a fluffy creature claiming to be a frog, is the equivalent of a black mage in Final Fantasy, Geno, a messenger from 'above' has special attacks that don't quite fit into one category, Bowser is the hard physical fighter, and Toadstool is the healer. 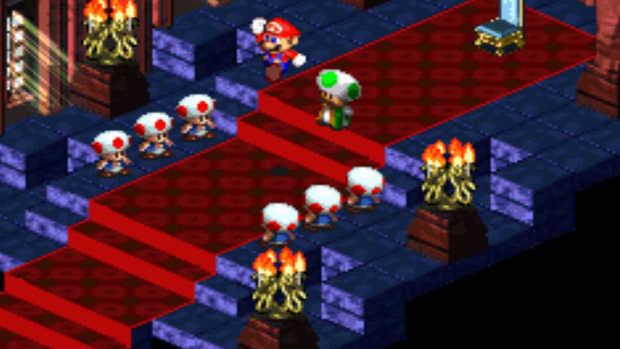 The overworld dynamic is interesting in that it differs from typical RPGs where you can explore it freely, albeit getting randomly attacked by enemies you cannot see. That annoying aspect of RPGs is eliminated in this game as you can see the enemies you encounter in Super Mario RPG. Some fights are not avoidable, but for the most part, you can pick and choose your battles in this one. The overworld is shown as a map and your pointer will move from location A to location B, and THEN explore the location. There are also a lot of fun minigames in this game too. One of them is called the Midas River, that has Mario swimming in a river where he can gather coins and frog coins. Another is Booster Hill, a racing game. This RPG is also packed with side quests and secrets. One of the most famous involves Culex, a Final Fantasy crossover in Monstro Town, which is a town of reformed monsters. A nod to Final Fantasy, Culex is harder than Smithy, the ultimate boss in the game.

As the game progresses, you meet the familiar Mario characters, Toad, the mushroom kingdom people, Yoshi, Bowser, Koopas and Goombas. You also meet new characters, starting first with the Smithy Gang that has taken over Mario's world. The first of this you meet is Exor, the giant sword from the beginning that falls into Bowser's castle seemingly out of nowhere. After being sent from Bowser's Keep, Mario goes to try to retrieve Toadstool a second time, and Exor destroys the bridge. Oh no! How will Mario rescue Toadstool now? Thus, the quest begins with Mario going to Mushroom Kingdom and meeting with the Chancellor to try to get Toadstool back. In Mushroom Kingdom, Mario meets Mallow, a frog (who looks nothing like a frog) who joins his team. After Mack, a giant knife takes over Mushroom Kingdom and they are forced to fight him, the quest begins. Mallow and Mario are told Toadstool is no longer at Bowser's Keep and, furthermore, that the Star Piece they found in Mushroom Kingdom is part of the broken 'Star Road.' What does this mean? Well, it means Mario's world is now a world where wishes no longer come true! Off to rescue it! 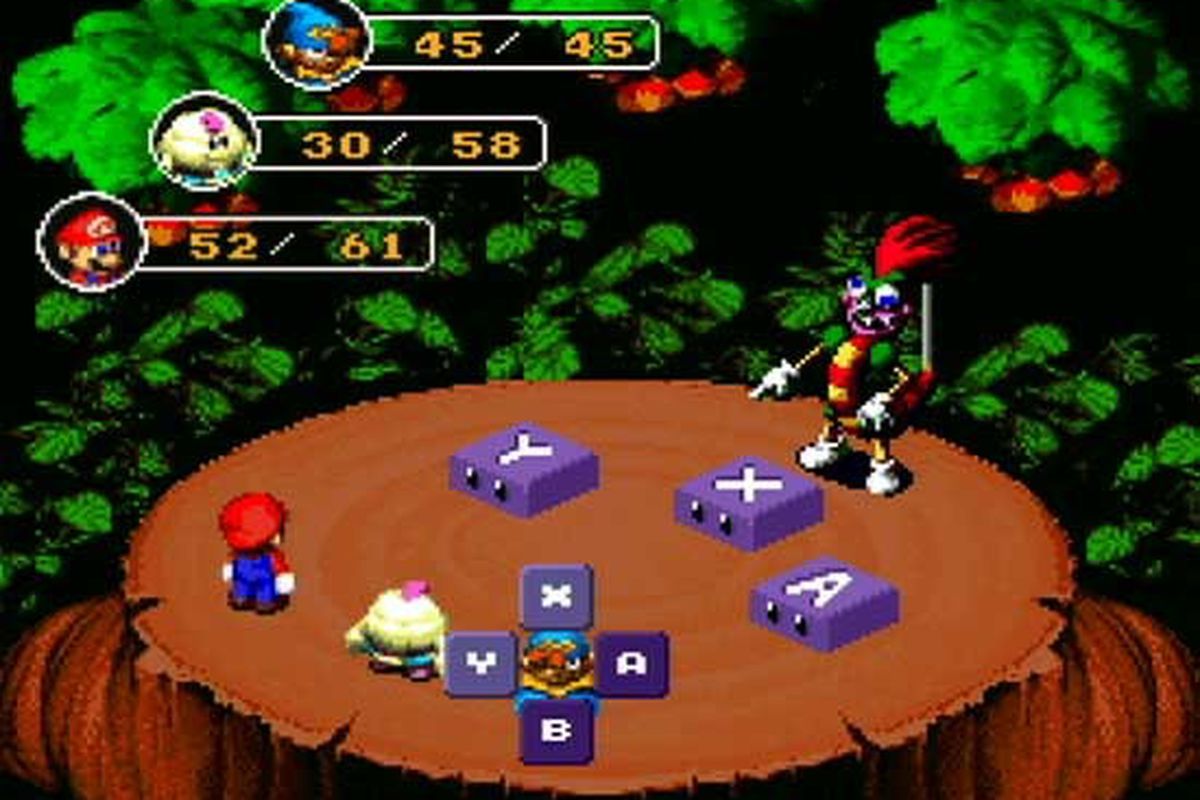 Bowser and Toadstool join your game about a third of the way through, in a very interesting scenario that I will leave to you to find out if you have not already played. But suffice it to say, in this game, Toadstool is no longer a damsel in distress. Sure, you do have to rescue her from another certain character, but she makes up for it by being a healer and even a strong physical fighter later on in the game. The controls in this game are smooth and well done. The audio and soundtrack is memorable too. Being a Square/Nintendo collaboration, there are throwbacks to the original Mario soundtrack but mostly, they outdid themselves with the new tracks in this game. The Forest Maze track seems to keep getting remixed, but the ones that I particularly liked were the theme for the Barrel Volcano and the Boss fight music. One thing that was unique for this game was each town had its own music, as opposed to Final Fantasy or Chrono Trigger which had at most two town themes per game.

How does this game hold up morally? For the most part, pretty well. The theme of the game of Mario repairing the Star Road to grant wishes once again and facing off against the Big Bad, Smithy, who wants a world filled with weapons rather than wishes, while not exactly biblical, does not contradict the message of the Gospel either. Smithy the weapon maker only wants to steal,kill and destroy, much like Satan. Like any JRPG, there is magic, but it is not based off Wicca or Satanism but is fantasy magic. As any RPG, there is violence, but it is cartoon like violence that is not graphic.The moral concern in Super Mario RPG is the inuendo. In one area, a female boss's cleavage is not only incredibly visible, but shakes every time she is hit and there is no way to cover this up. There is a scenario that can, if played in a way that leads to it, lead to Bowser and Mario kissing. One scene involves Mario going through Toadstool's underwear drawer, but this can be avoided. This is mostly a clean game, but I would hesitate about giving it to younger gamers due to the innuendo.

At the end of the day, Super Mario RPG is a well-loved classic for a reason. It even mostly holds up well from a Christian perspective. The only thing really of concern for a parent or believer is the innuendo. Fortunately, this is not a large part of the game and some of it can be avoided. If you have not payed this game already, do so! If you have a Wii U, pick it up now!