When I heard that Disney was coming out with a Skylanders-like game called Disney Infinity, I rolled my eyes. I figured that this game was another lousy attempt to make the ultimate Disney game, only to end up being a very mediocre-received game like Disney Universe. The premise to make a game that features all your favorite Disney characters sounded good… too good. I figured that a game with that high of potential could only bomb. Fortunately, I was wrong.

Disney Infinity is really more like a slew of games rather than just one. The game uses a base that you can place figurines and transparent pieces called playsets on. The figures are the characters you can play as, and the playsets are the story modes you can play. You can also create your own world in a place called the toy box, which is built into the game. This system allows many different ways to enjoy the game.

Similar to Skylanders, Disney Infinity is sold as a starter pack. It comes with the game, a figure base, three playsets put into one piece, and three figures: Jack Sparrow (from Pirates of the Caribbean), Sulley (from Monsters University), and Mr. Incredible (from The Incredibles). Though these are the only figures and playsets that the game comes with, there are plenty more that can be purchased in the game isle of your local store. As an action figure collector, I was very impressed with these figures. Though they lack any form of articulation, they are very cool. Though they’re not perfect, they feature a nice amount of detail and paint. It should be noted, however, that these are not meant to be played with. As the repairman from Toy Story 2 said, “They’re for display only.”

The question that most parents will probably ask is “Is this worth the extra money?” I would say so. Instead of paying $50 for some cruddy movie-based game, you could pay $75 for three really fun movie-based games. The other playsets are about $35 each, which is still cheaper than most licensed games. The only real wallet emptiers are the characters who are sold singly. Paying about $14 to play as a character is a bit extreme. Even that, however, isn’t as bad as it seems, since you’re still getting a cool figure to come with it.

As stated earlier, the game comes with three playsets: a Pirates of the Caribbean playset, an Incredibles playset, and a Monsters University playset. Each playset can only be played with characters that are designed for them. For example, you can play as Jack Sparrow in the Pirates playset, but not Buzz Lightyear or Lightning McQueen. Though the concept of using figures to play as characters is similar to Skylanders, the gameplay is actually nothing like it. Each playset plays in a 3D environment, where you can roam around, fight enemies, climb ropes, hang on walls, purchase virtual toys, and collect prizes. Any character you play as, regardless of what playset you’re playing in, has a melee attack and a projectile attack. Though it may sound a little too simple, two different types of attacks are really all you need to get the full experience of these characters. Though they all have the same basic gameplay, the playsets have their noticeable differences.

The Pirates playset is the largest of the three. It’s made up of several islands covered by a vast sea that you can travel around in on your boat. The boat is customizable and is very fun to sail around in. You’ll occasionally run into other ships and engage in sea battles. You’re able to aim both left and right and are able to change what kind of cannons you use. It’s cool that during these sea battles, you actually have to rely on the waves to aim at your opponents.

Of course, this doesn’t mean that playing on land is any less fun. Being able to play as Jack Sparrow (or Barbossa or Davy Jones if you’ve bought them) and beat up bad guys is really entertaining. You can also stray from the main story and do missions that townsfolk will give you. Some of these can be quite humorous such as a throwing a guy into the water because he said it would take just that to get him to work. At the beginning, you can use a sword and gun, but as you progress, you can unlock other weapons such as bombs that add even more diversity to the game.

The Incredibles playset isn’t as big as the Pirates, but the fact that its landscape is a city that you can explore completely on foot makes it seem bigger. Pirates is technically the bigger playset, but that’s because of the sea. The amount of area you can cover on foot is more limited, because the only walking you do is on little islands. The Incredibles playset is a bit more combat-based than the Pirates playset. It plays more like Spider-Man 2 where you can explore a large city, beat up bad guys, and do missions for random civilians. Travelling through this large city would be quite tedious if it weren’t for the fact that you can buy a car to drive around in (and later a helicopter).

Being as you’re a superhero (or super villain if you choose to play as Syndrome), you would think that you wouldn’t be able to purchase any weapons, since the characters only used their super powers in the movie. Fortunately, the creators of the game recognized this issue and made up items of their own. You can purchase a hover board and a glider, which both prove useful when looking for prizes.

The last of the three playsets, the Monsters University playset, is probably the least exciting. The entire playset is about a rivalry Monsters University has with another college called Fear Tech. This involves you doing things like TP-ing their trees, stealing their mascot, or scaring the pants off Fear Tech students for putting up posters on your campus. That being said, the Monsters University playset is the least action based. It’s not bad. In fact, it’s still very fun. Like the Incredibles playset, there’s still a lot of variety in the things you purchase such as a paintball launcher and a bicycle and there are many different kinds of missions you can do. But this one kind of pales in comparison to the other two. My recommendation would be to play this one first, so this one doesn’t feel like a watered down experience. 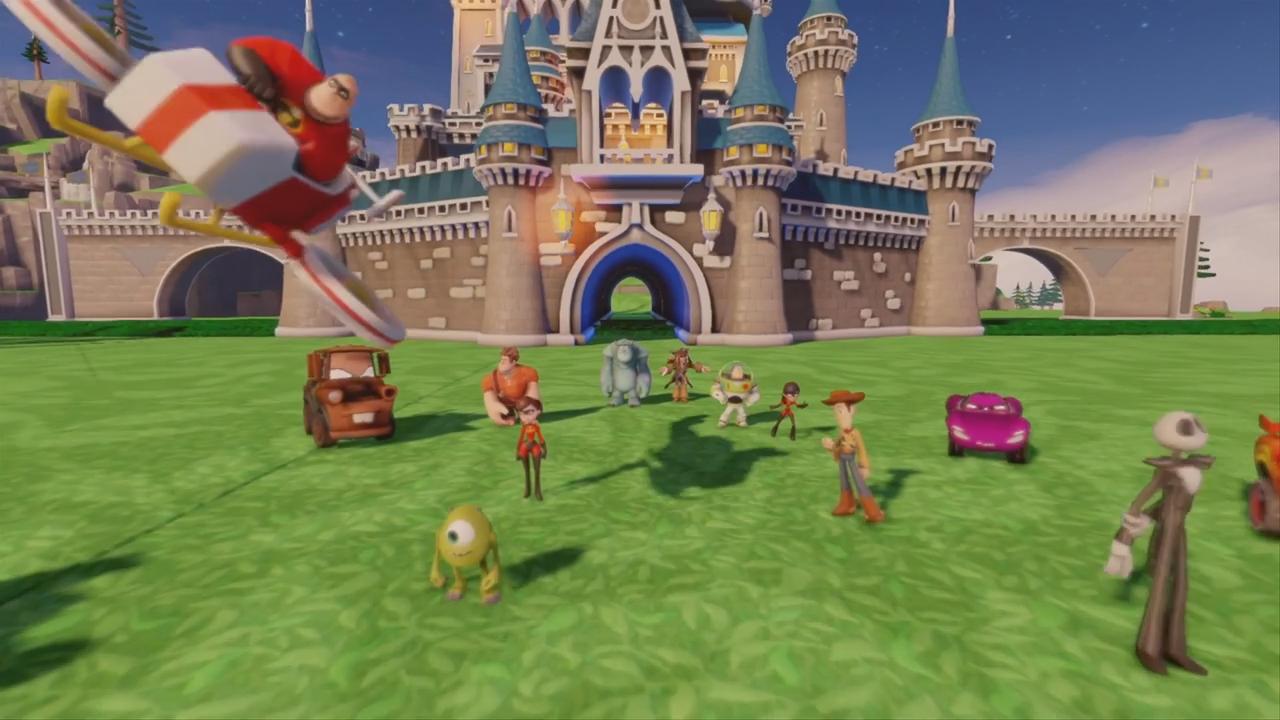 The toy box is a place that allows you to either create your own world or download other people’s (including the developers’!). That is, uploading and downloading toy boxes can be done on any of the HD versions of this game. The Wii version can’t go online, and the 3DS version is a party game. The toy box, unlike the playsets, allows you to play as any of your Infinity characters. You can use the prizes you win in the story modes (or earn more through a random selector) in your toy box. All of these prizes originate from hundreds of Disney films. The Wii U version in particular makes customization better with the ability to use the gamepad to select your toys (as opposed to the other versions that cover the screen when selecting). The toy box can be quite confusing, but Mastery Adventures, special levels in the toy box that act like tutorials, help you get a better understanding of how it works.

Now I should be clear that the toy box isn’t perfect. You really can’t program it to have a specific objective and it’s not as in depth as the level creator from the LittleBigPlanet games. It’s true that it not being as in depth is good for those who couldn’t understand the LBP level creator, but it still seems more limited. It’s also important to know that you can’t make hardly anything without beating the three playsets first.

The thing that will bug you most about the gameplay will most likely be the stability. It’s not a very glitchy game, but the frame rate will often drop during the more open world playsets, which gets very annoying. I’ve also had to restart the game a couple of times, due to it freezing.

The graphics in the games are really good. Everything has a very plastic look to it and the worlds are very well designed. The characters look just like the figures they’re based on and they move just like the characters would in the movie. For example, Mr. Incredible has a very heroic (yet somewhat slow) run, while Jack Sparrow runs more like a drunk guy (although no form of alcohol is even mentioned in this game). Unfortunately, Disney Infinity’s graphics suffer from the same issue that plagues most games’ graphics: close ups. These graphics look great, but whenever the camera gets to close in a cinematic, they can sometimes look kind of ugly. It’s not as bad as a lot of other games, but it still would have been nice to fix. I should also point out that, despite the beautiful depiction of the sea, it bugged me that the splash effect in the Pirates playset when viewed closely looked very fake. 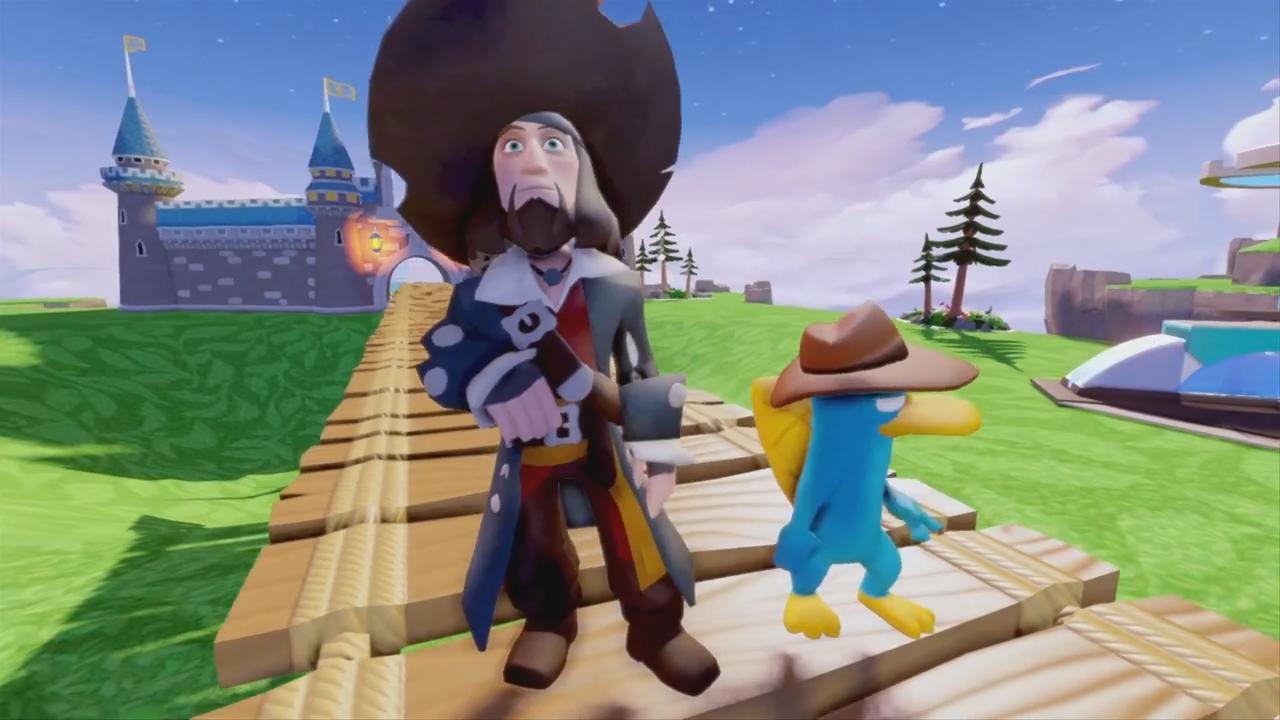 The voice acting is great. Most of the voices are either sound-alikes or the actual voices from the films. The only voice I don’t like is Sulley’s. He doesn’t really sound much like John Goodman, the actor who plays him in the movies. Other than that, all of the voices sound very similar to the original characters’. Unfortunately, some of the voice recordings, as great as they are, repeat way too often, which is quite annoying.

The soundtrack is even better. Most of the songs are new, but sound like they could fit into the actual movies. The theme that plays in the main menu really captures the essence of Disney music, featuring an orchestrated sound that has a lighthearted touch to it. The Incredibles playset, like the movie, has a very jazzy soundtrack, and the Monsters University playset has an upbeat, lighthearted soundtrack with lots of percussion. The Pirates playset in particular has an amazing soundtrack, even though the town song (while very catchy) is a little happy-sounding for the films.

Disney Infinity is a pretty clean game. There is some violence, but every time you kill an enemy they just break like a toy would. The Pirates playset has some supernatural references such as Calypso (the goddess of the sea), “a ship of the dead,” voodoo cannons, Davy Jones, etc. It should be noted, however, that these things are taken very lightly and aren’t as dark as they are in the films. The only other issue (at least in the starter pack) is that the Monsters University playset encourages you to pull college pranks such as TP-ing the rival college’s trees.

So the question is: Is Disney Infinity really deserving of the name? Not quite. Though the gameplay is pretty much nailed, the actual selection of Disney characters and worlds is not really as big as it should be. So far, it’s been mostly Pixar and Johnny Depp movies. Characters like Phineas, Rapunzel, and Mickey add a good amount of variety to the roster, but there is still a lacking of pre-2000 Disney characters. It would be great to have a Peter Pan playset or maybe a Tarzan playset and characters like Aladdin or Hercules for the toy box. Fortunately, the developers are still making new figures and playsets, so those possibilities are still open. Even still, Disney Infinity is an excellent game that you’ll definitely want to try.