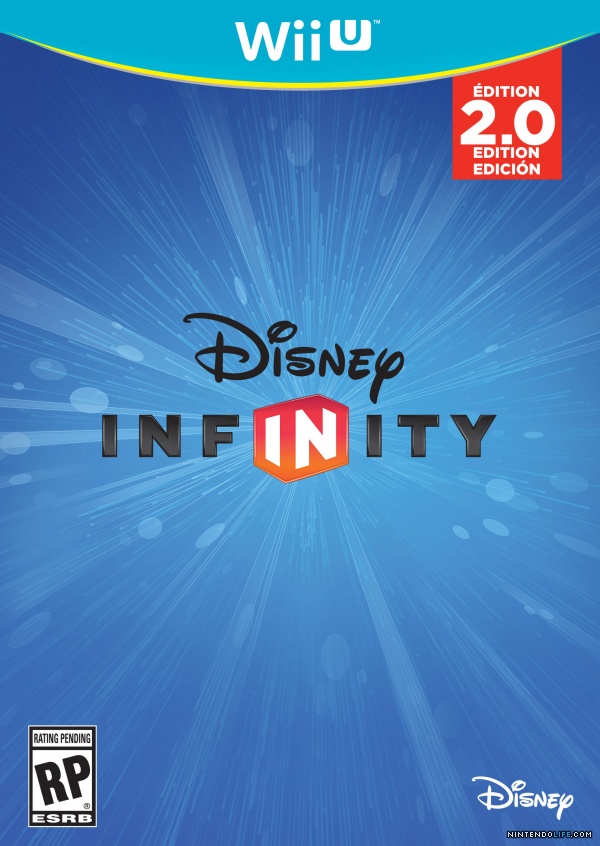 After the success of the first Disney Infinity, Avalanche Software decided to expand their game to include some of Disney’s more recent franchise purchases. For Disney Infinity 2.0, the franchise of choice was none other than Marvel Comics, featuring playsets of The Avengers, Ultimate Spider-Man (the Disney XD cartoon), and Guardians of the Galaxy. While many of the new features improve upon the gameplay, the overall result is a bit disappointing.

Before I get into the review, I just want to mention that I feel it is rather odd that the first game even got a sequel only a year after the first one’s release. After all, only one year after a game called Disney INFINITY is released, a second one is made. This seems to contradict the whole “infinite possibilities” part of the game, being as the “infinite” first game ended rather abruptly. I mentioned in my review of the first one that the name Disney Infinity was not quite appropriate, being as the game seemed to only touch on certain Disney elements. Despite that, I do not mind that there is a sequel. It would make sense that it would have to expand eventually. To me though, it just seems weird that it was made so quickly, and having to buy another game is a real drainer on my wallet.

There are two different versions of the starter pack. The Marvel pack comes with three characters (Iron Man, Thor, and Black Widow), two Marvel Toy Box games (think of them as little mini games with stories), and an Avengers-themed playset. The (cheaper) Disney pack comes with two characters (Merida from Pixar’s Brave and Stitch from Lilo & Stitch) and two Disney Toy Box games (which are the same as the Marvel games, but Disney-themed). All of the characters and games from both packs are also sold separately, so you can collect them all regardless of which starter pack you choose. This review will be based on the Marvel starter pack, being as it is the one my family and I own.

The Avengers playset is loosely based on the smash-hit film and the Disney XD series Avengers Assemble (which appeals more to kids than other comic book shows). In it, Loki (Thor’s brother) has teamed up with M.O.D.O.K. (one of Marvel Comics’ more obscure villains) to freeze the world. The Avengers, aided by Nick Fury (played by Hollywood legend Samuel L. Jackson), Wasp, and Ms. Marvel, have to stop these criminals from accomplishing their sinister goal. And that’s about as deep as the plot gets. 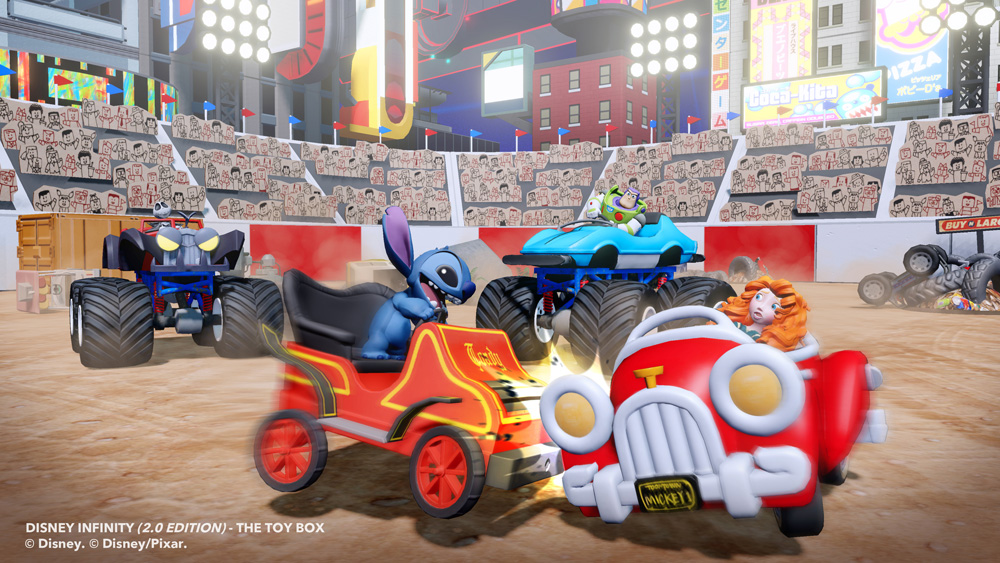 Being as the previous Disney Infinity did not have exceptionally deep plots in its playsets, it should not be that big of a deal that its sequel does not either. However, it is still a disappointment. The reason is that all of the trailers of the game prior to its release made it seem like the stories were going to be more in-depth than the first game, featuring more cutscenes and more dialogue with voice acting. While there are more cinematics than the first game, the overall story does not seem to be that much better (the same applies for the Spider-Man and Guardians of the Galaxy playsets, but they are sold separately).

The story isn’t the only thing that is lacking, however. The actual missions that are carried out in the playset are very unoriginal. Whereas the three playsets in the first game offered a variety of missions, the one Avengers playset only has two mission types: go somewhere and beat up bad guys, or protect something and beat up bad guys. Obviously, as this is a superhero playset, fighting is an important part of it. However, it seems sad that there really isn’t anything else to do in regards to missions. Games like The Amazing Spider-Man or LEGO Marvel Superheroes show that, while fighting DOES make up the majority of duties, there are other things superheroes can be doing in their games.

Despite the playset itself being rather lackluster, Avalanche Software has made some major improvements over the last one. One in particular is the character gameplay. Though you start out with two attacks like the first game, you can actually unlock extra moves and upgrades through a new addition to the game called the Skill Tree. The Skill Tree is basically a large selection of upgrades that you can purchase as you level up. You could increase your power or health, expand your jumps, or even add a new super move (activated by the R trigger). This makes leveling up seem much more important than the last game.

I actually took more enjoyment from the two Toy Box games than the actual playset. The first one is Assault on Asgard, which is like a Thor-themed Tower Defense. The second one is Escape from the Kyln, which involves you trying to escape a prison and is based on Guardians of the Galaxy. Not only are these little mini games fun ways of leveling up your character, but they also allow you to play as ANY Marvel character. For example, my brother and I like playing as Iron Man and Spider-Man in the Assault on Asgard game, because you can’t play as Spider-Man in the Avengers playset. 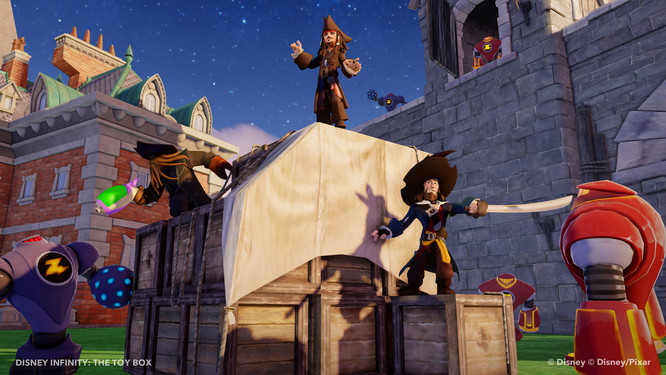 The Toy Box is very similar to the first game, though there are some changes. Objects are now placed into categories (such as “Buildings,” “Vehicles,” or “Townspeople”) instead of one giant selection in a random order. They are also placed next to other objects of the same franchise. For example, if I wanted to place the Doofenshmirtz Evil Inc. building and the Waterslide structure in my Toy Box, I would find both of them right next to each other, since they’re both from Phineas and Ferb.  Like the first game, the Toy Box is the only part of the game where you can play as any Disney Infinity character (including all of the characters from the first game).

You can also get little construction workers to help you build large yet simple structures, such as towns or forests. Say you want to build the city of Agrabah from the film Aladdin. If you didn’t want to spend long hours building the town, you could just place the Agrabah construction worker (who looks like the Sultan from the movie) and have him do the work for you. This makes the more tedious aspects of building a Toy Box much simpler.

One of the coolest parts of Infinity 2.0 is the new Toy Box mode, My Interior. My Interior is basically a house that you can customize and expand. In it, you can complete several missions to gain new items to use. The customization in it is really good. You can purchase new walls, trims, lights, and floors. You can also buy lots of objects found in several Disney movies and shows to place in your rooms. What makes My Interior fun is the fact that you can turn it into a house based on you particular interests. You could base any of your rooms off of Toy Story, Tron, Peter Pan, or any of the other themes the game comes with. You can also mix together themes. For example, my living room has Doofenshmirtz’s chair (from Phineas and Ferb) next to Grunkle Stan’s chair (from Gravity Falls), as a way of expressing my appreciation of both shows.

The graphics are very similar to the first game, but for some reason, I don’t find them as appealing. It’s not that they are necessarily worse than the first game’s. In fact, I think in some cases they are better. Nothing, however, is really THAT improved. Like the first game, there are glitchy shadows, frame rate drops, and some design patterns that look rather low-res. The graphics are still good, though. Everything still looks very cartoony and colorful. Also, all of the characters move and behave like their original versions (a thing I liked particularly about the first one). One thing that is actually better is the scope of the game. The cities in both the Avengers and Spider-Man playsets make the Incredibles city from the first game look tiny. Maybe the lack of major improvements makes all of the flaws in the original stand out more. Otherwise, they are still pretty good. 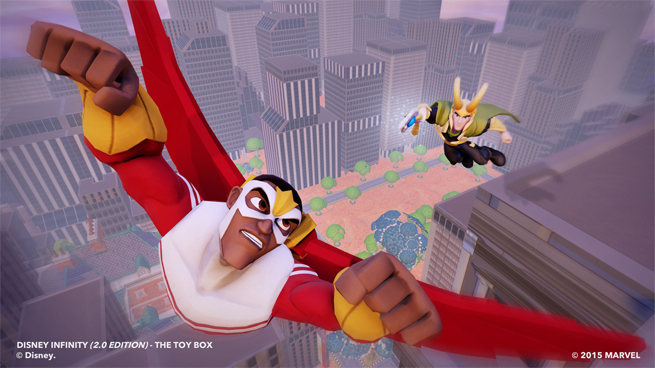 Like the first game, the voice acting is very good. All of the new voices for the Marvel characters return to play their characters. For example, Adrian Pasdar (Iron Man), Laura Bailey (Black Widow), and Travis Willingham (Thor) come back from Avengers Assemble (the other Avengers Assemble actors return, too). Also, Drake Bell (Spider-Man), Greg Cipes (Iron Fist), and Logan Miller (Nova) return from Ultimate Spider-Man to play their characters in the Spider-Man playset. In regards to music, however, the sound is not that notable. The music gets the job done, but doesn’t feature anything special.
The content of the game is, like the first game, pretty kid-friendly (which makes sense being as this game is aimed toward kids). There is quite a bit of violence (which is a bit more realistic and stylized than the last game), but nothing graphic is depicted. All of the villains break like toys, so it doesn’t appear that anyone is really getting hurt.
However, Disney Infinity 2.0 has something rather… odd about its morality. Like you would expect from anything with superheroes in it, there are a few female characters with tight clothing. Normally this wouldn’t be a problem, being as the Infinity versions of the characters are very cartoony. Unfortunately, though, the character designers decided to still give the female superheroes attractive bodies, putting emphasis on things like their small waists. One character, in particular, who is oddly designed is Ms. Marvel. For some reason, they actually designed her outfit to outline… her bellybutton (even though she doesn’t show her midriff). Not only is there no such thing as a material tight enough to do that, but it is also incredibly weird for a kids game!
Now please understand that when I say that the female characters are designed rather oddly (aside from Ms. Marvel who is just plain weird), I mean in the sense that it is odd for Disney Infinity. The character designs, as stereotypical as they are, are nowhere near as over sexualized as the female heroes of games like Marvel’s "The Avengers: Battle for Earth."  So I want you to know that, though the females are worse than I had expected, there is not anything in this game that is worse than what you would find in literally any of the superhero cartoon shows, past and present.
Where the game improves upon the gameplay of the characters and the Toy Box, the game takes a step back with its lackluster playsets. There is still plenty of fun to be had in 2.0, but unfortunately, not as much as there could have been. With the more recent 3.0 featuring characters from the six (soon to be seven) Star Wars films, it looks as though Disney Infinity will still be going strong. According to recent reviews, the series has been improving upon its story modes.
As for 2.0, I still think people, especially kids, would have fun with it. I might, however, recommend picking up some of the characters, and just skipping the rest of the game. The reason I say this is that the only things that you can’t use in 3.0 are the playsets from 2.0, which I consider to be the most boring parts of the game.  However, 2.0 is extra cheap with the release of 3.0. If you decide to get it, I still think you would have a lot of fun. Just be aware that while the characters are a lot more fun, the playsets themselves are not going to be as creative as the first game’s.