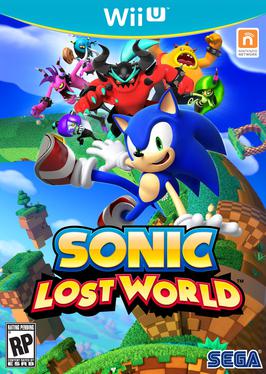 With Sonic Colors and Sonic Generations, it’s safe to say that over the past few years the Blue Blur has been doing pretty good for himself. Now he seeks to make a new hit with his latest game, Sonic Lost World. As part of a partnership with Nintendo, SEGA has released Lost World exclusively on the Wii U and 3DS. Though I haven’t played the 3DS version, I can say that the Wii U version is another one of Sonic’s great ones.

The story starts with a sky battle between Sonic, in a plane accompanied by his trusty sidekick Tails, and Eggman, who has a bunch of creatures called flickies captured in a capsule. Sonic seeks to free the flickies, but Eggman decides to drop them. Sonic saves them, but the plane they’re on breaks down. They crash land on a planet known as the Lost Hex, where they meet enemies known as the Deadly Six. It’s up to Sonic and Tails to stop Eggman and the Deadly Six from accomplishing their unknown goal.

In terms of story, Sonic Lost World has sort of a mixed bag. On one hand, you have six new villains who just aren’t that interesting. On the other hand, they make the story feel fresher, and lead into an interesting twist in the plot. Like the past two Sonic games, the tone is fairly goofy, with characters cracking puns every now and then. Unlike the other two games, this one is more adventurous with some actual serious moments taking place. Though I appreciate the slightly more serious tone, it does make the goofy moments seem more out of place.

Sonic Lost World’s gameplay is very fun. The game follows the same basics of most Sonic games. You run through a level at high speed while collecting rings and jumping on robots heads with a lock-on move called the Homing Attack. However, this game offers plenty of new things to make the experience new. First, the levels are designed to be spherical, like Super Mario Galaxy. Every round platform has its own gravitational system. This allows you to beat the levels in a variety of different ways.

Second, this game adds a new attack. In pretty much every 3D Sonic game before this one, you would attack enemies with a Homing Attack. In this game, the Homing Attack returns, but a new move is added, which is a kick. The kick makes things more interesting and allows you to do things like take out multiple enemies at once by kicking one into the others.

And third, this game allows you to choose when to run fast. Sonic now runs fast when you hold down the ZR button. Otherwise, he runs like most platformer characters. This takes away most of the frustrations of being out of control and is a welcome addition to the series. What I also like about the run button is that it creates what the game calls a parkour system. Simply put, it allows you to run on walls and things of that nature. This adds another level of depth to the gameplay.

There are some things that I’m sure that people will find annoying. You’re probably wondering:  Are there cheap deaths? A few. But what Sonic game doesn’t feature a cheap death or two? All this game does is reduce the number of deaths thanks to the run button. Is Sonic slower (as IGN pointed out)? Yes. But he still has a great amount of speed and is still a lot faster than the average platformer character. As a Sonic fan, who has had a lot of experience with the frustrations of previous games, these things were easily overlooked. 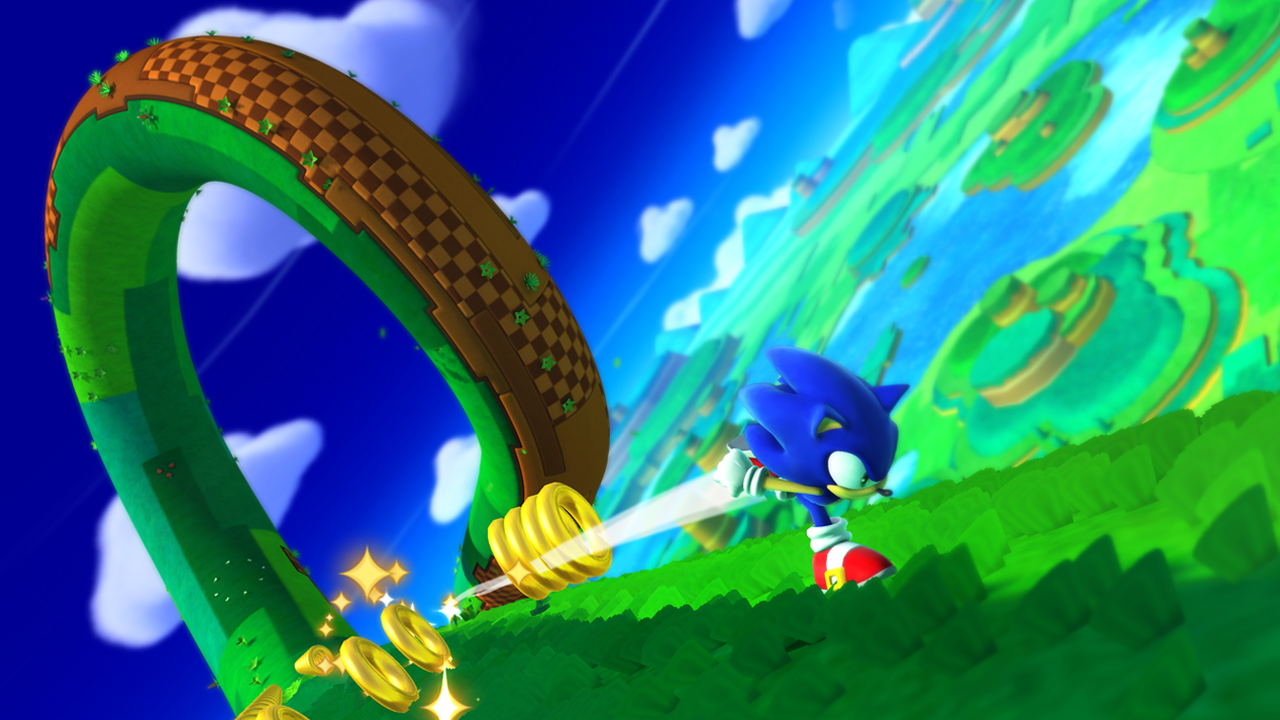 The only thing I really dislike about the gameplay is the boss battles. Most are overly simple and can be beaten in the first try. This in it of itself is rather disappointing. Then one of the final bosses is overly difficult. It required me to do something that I never had to do earlier, which, as a result, had me forget how to do it.

The graphics are absolutely beautiful and excellently showcase what the Wii U can do. All of the characters, levels, and items feature a great amount of color that few games have been able to match. The game runs at an impressive 60fps, with virtually no frame rate drops. Edginess is kept to a minimum, with the only visible edginess being on a big screen when characters are close to the camera. Though the graphics aren’t over-the-top realistic, the artistic style shows very few flaws and is a very good fit for our favorite hedgehog.

The level design is also great. Despite using some cliché themes (such as desert, forest, etc.), this game makes what should be quite bland look very good. As I said earlier, the game uses a gravitational feature that allows extra exploration. Not very many Sonic games have as good of level design as this one. 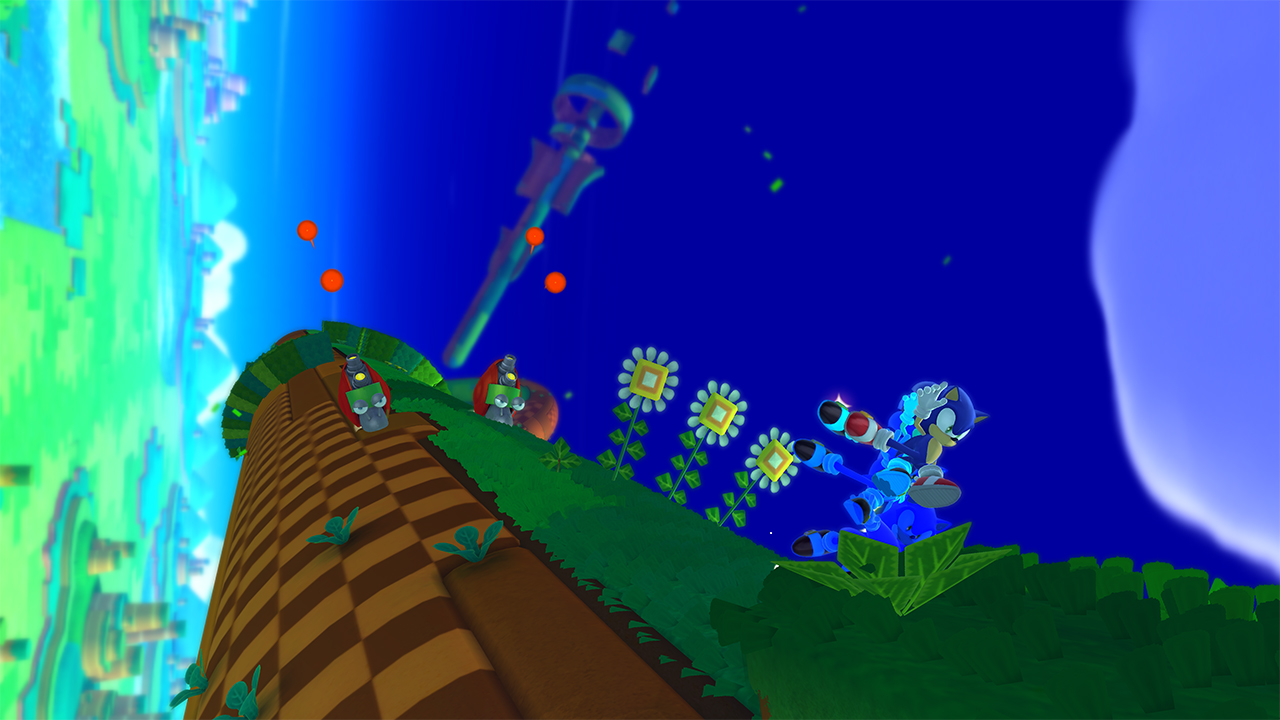 The voice acting is… good. When compared to that of Sonic Generations, it’s getting better. Characters like Amy Rose who had horrible voices are now at least bearable. Mike Pollock’s Eggman is as usual great, and Roger Craig Smith and Kate Higgins do a good Sonic and Tails. Still, it’s times like these where I miss the previous voices, considering how well they fit the characters.

Fortunately, when it comes to music, Sonic once again delivers. Lost World’s music is much more orchestrated than the previous games and features one of the best themes in a Sonic game. This game has a soundtrack where the main theme will play over and over again, but because it’s so good you really don’t care.

In regards to the moral content, the game is rated E10+ for violence. The actual violence in the game is the same as it always has been. All you do is jump on enemies heads or kick them. My guess as to why it wasn’t rated E is that in one scene Eggman threatens someone with some rather dark threats (e.g. “I’ll burn your worlds you rebellious scum! I’ll destroy everything you love and make you watch!”).

Sonic Lost World has become one of my favorite Sonic games and currently my favorite Wii U game. When compared to Colors or Generations, I honestly couldn’t say which is best. Wherever I would put it, it would definitely be up there with them. The gameplay is fun and exciting, the graphics are practically perfect, and the soundtrack is great. SEGA really did a good job making Super Mario Galaxy for Sonic. As I said, there are some frustrations, but being as those are common in Sonic games, I’m not too upset about them. But with those frustrations in mind, I can only truly recommend this game to those with previous Sonic experience.