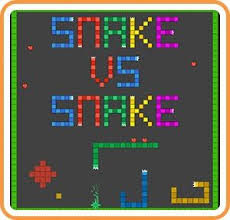 Snake vs. Snake
Developed By: CasualGames.nu
Published By: Casual Games
Released: Sep 26, 2018
Available On: Android, macOS, Windows, Switch, Xbox One
Genre: Arcade, Party
ESRB Rating: E for everyone.
Number of Players: up to four players (six on other platforms)
Price: $3.99

Thank you Casual Games for sending us a review code!

Harking back to a simpler time, Snake vs. Snake takes the very basic concept that originated from 1976’s Blockade where you take control of a square, rectangle, or dot that must collect spawning objects as your character leaves behind a trail. The main goal is to last as long as possible in the area while each collected item extends your body so space becomes quite limited. The concept has been ported and re-imagined to pretty much anything that can play video games, from phones, to web browsers, and even TI-86 calculators! As snake games are available everywhere, even for free, let's see if Casual Games have done anything to make their take on the genre worth a purchase.

As evident of the title, Snake vs. Snake’s centerpiece is the multiplayer mode where snakes are forced to battle against other snakes to please their abusive master (I’m only joking about the master part). The way Casual Games takes this party game concept is with the use of items, like Mario Kart. On the Switch version, up to fours sneaky snakes can stylishly slither across five player vs. player game modes: Battle Mode, Battle Mode Arena, Tail Runner, Pew Pew, and Pew Pew Tailless. Battle Mode and Arena are the game modes where the snakes take part in tail-to-tail combat, but with fun and wholesome items such as bombs, shots, and otherworldly abilities such as being able to slow all other snakes, or grant yourself temporary invincibility. To defeat other snakes, you either have to tag ‘em with your items, or have them run into your extended body (or their own). The main difference between Battle Mode and Arena are the design of the respective maps. While the standard Battle Mode is open-spaced, the Arena version has fixtures in the middle of the map—making the latter even more chaotic as that is where all the items spawn. 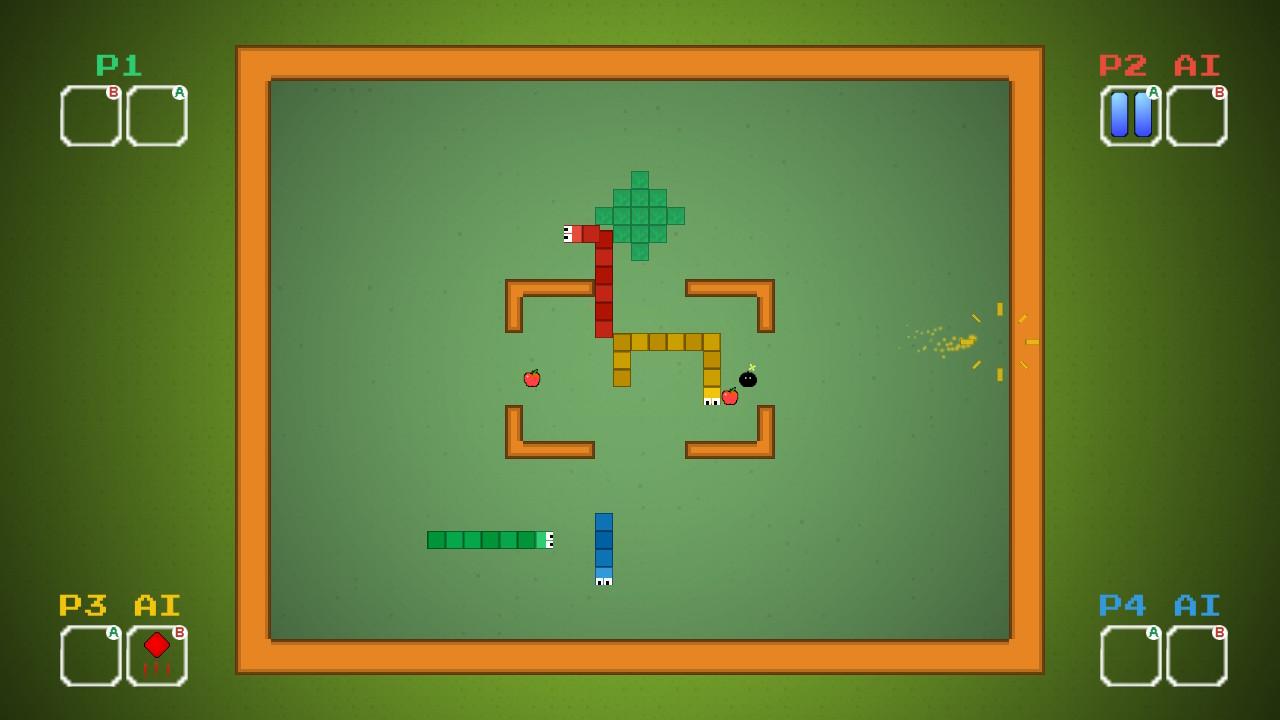 Strong Points: Inexpensive; interesting multiplayer component
Weak Points: Not enough map variety in the versus mode; jarring shaking effects
Moral Warnings: The snakes can be shot at with the weapons used in the multiplayer modes

Tail Runner is similar to the Light Cycle game that is mostly associated with the 1982 Tron arcade game, even though the very concept originated from Blockade. If you’ve played or are familiar with that game, then you know exactly what Tail Runner is about. For those unfamiliar, the concept is that your snake extends, but the trail is permanent, so the goal is to trap the other snakes while making sure you don’t mess up yourself. Pew Pew and Pew Pew Tailless is similar to the Battle Mode, but the only item you can get is the shot item. Tailless is both what you would expect, and not at the same time. Since you don’t have a tail, that means you can actually make a full 180 degree turn. This alone makes the Tailless mode worth playing, as it add an extra layer of depth to something I wasn’t expecting much from.

All of the multiplayer modes are quite interesting, and even if you don’t have enough friends on deck, you can add AI opponents to the fun. However, I do wish there was more map variety. I actually happened to play the single-player mode first and seeing all of the variety in the single-player levels but not the multiplayer left me a bit disappointed. There is also a screen shaking effect that I personally am not fond of when certain items are used. You can decrease the intensity of the shaking, but even on low settings, it’s still a bit of an annoyance.

Speaking of single-player, that mode has three different modes to choose from. You have your standard snake mode. Collect the apples until you fail. Very standard and self-explanatory. The other two game modes (at least from what I’ve experienced from the genre) are fairly unique. They go by Speedrun Mode and Hardcore Mode. Speedrun Mode has you go through 18 levels with wild designs, collecting all of the apples in the level. Like Tail Runner, your snake’s body does extend, but never shrinks. The concept gives off a puzzle vibe as you have to think about where you go and make sure you don’t block off an apple you need to collect. Hardcore is identical to Speedrun with slight differences. In Hardcore, you only have 3 lives to get through the levels, and instead of your score being by time, it is by units traveled. I happened to get the number 1 ranking on Speedrun Mode, though I’m positive that anyone can beat my time if they really wanted to (and I know myself I can shave off at least three minutes). 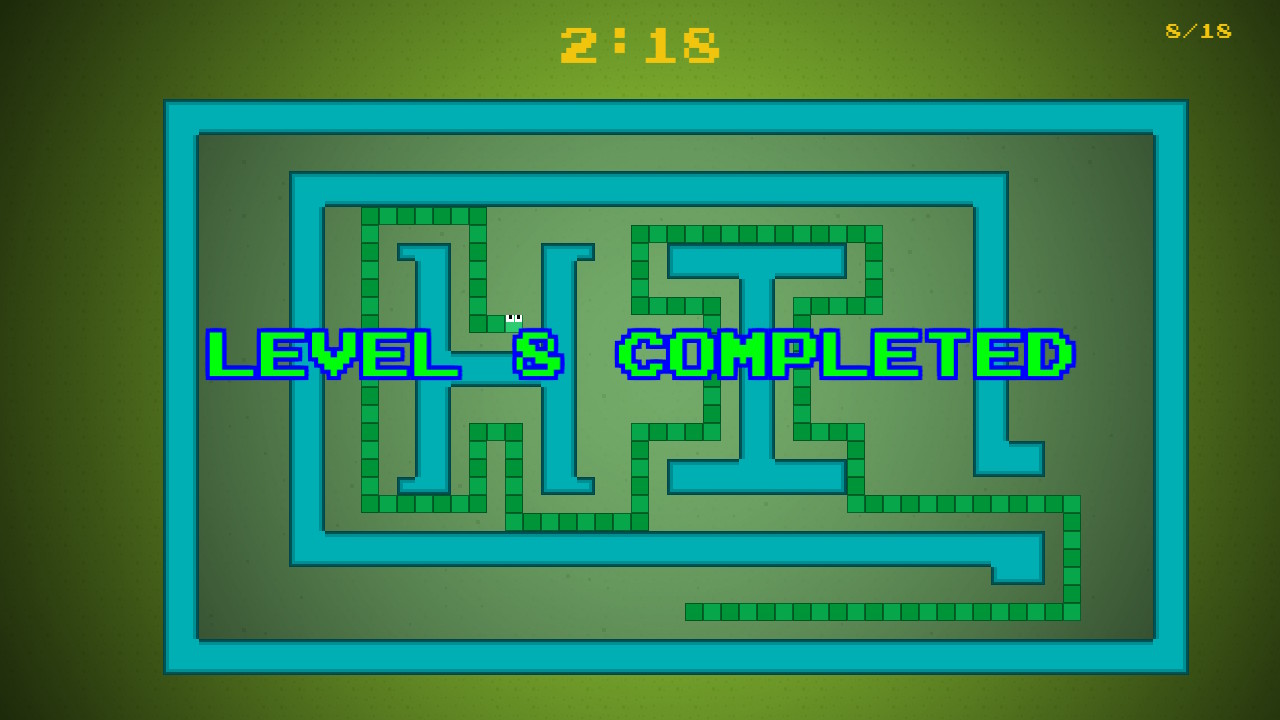 The graphics are simple. As mentioned before, apples take the place of the dots that are normally seen in these types of games. The color pallete is nice (changes with every level or retry), and the snake characters are kinda cute, in a goofy googly-eye kind of way. The music is better than I thought it would be. It’s nothing soundtrack worthy, but the person who composed this did a good job mixing in digital, retro, and modern sounds into the piece. It’s pretty hard to screw up controls in a snake game so they didn’t manage to do that. Either analog or directional controls can be used. There is this one thing that if the snake runs into a wall, there is a slight pause—giving a bit extra time to make a turn. Not too sure if this was made intentional or not.

If this was a standard snake game, there would be no moral concerns to speak of, but this is not your ordinary snake game! In all seriousness, the only concern is of some of the items used in the multiplayer modes, and some levels in the single-player have these turrets that can shoot at you. It’s the absolute bare minimum of violence that not even the ESRB took note of.

Snake vs. Snake is another snake game of the snake genre where snakes do their snake things. If you have an active group of friends or family, I’d say the game is worth a purchase as its simple premise and cheap price make it easy for anyone, whether they are a kid or an adult, to play and get entertainment out of. Even if you don’t have friends or family visit often, I could also vouch for the portable versions for on-the-go fun.