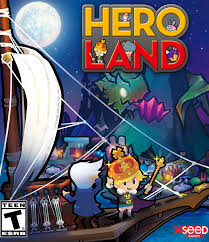 Thank you XSEED Games for providing us with a review code!

With the abundance of RPGs on the market today, developers need an ace up their sleeves in order to differentiate themselves from the competition. XSEED Games published FURYU Corporation’s Heroland last year on consoles and PC, which carries the distinction that you don’t actually control your party members directly; in fact, you’re just a party leader that doesn’t fight at all. While the concept is innovative initially and the writing is top-notch, the game doesn’t have the legs to be all that interesting after a while.

Heroland stars Lucky, who wants to become an employee at the titular theme park. After successfully being a tour guide to the spoiled Prince Elric (nicknamed 18 based on how high-numbered his position to inherit the throne is), he accidentally breaks a vase that forces him into a life of indentured servitude in order to pay off his debt. Accompanied by fairy guide Lua, what follows is a quest full of wacky characters and a tale of zany exploits from the cast.

The main gameplay loop in Heroland revolves around Lucky rounding up party members to undergo Tours (which are in-game dungeons) in order to advance the plot. The gimmick here is that Lucky isn’t directly in any battles at all; instead, he’s the Tour Leader, which means he can only provide guidance in certain situations (though he can directly influence the general actions of the party or force a member to do one action based on a guidance meter which fills up periodically). This is reminiscent of XSEED’s own My Life as a King, where you have to allow your partners to do the heavy lifting. Unlike that game, however, everything is tracked with a real-time system, so you’ll be waiting for enemies or party members to pull off attacks, with some cooldown for stronger techniques. Characters are divided into different roles, such as tank or mage, and can be positioned into a diamond of four. Tanks are better used in the frontline, while healers should be positioned in the back; freelancers can be used in any situation, which makes it a jack-of-all-trades class. 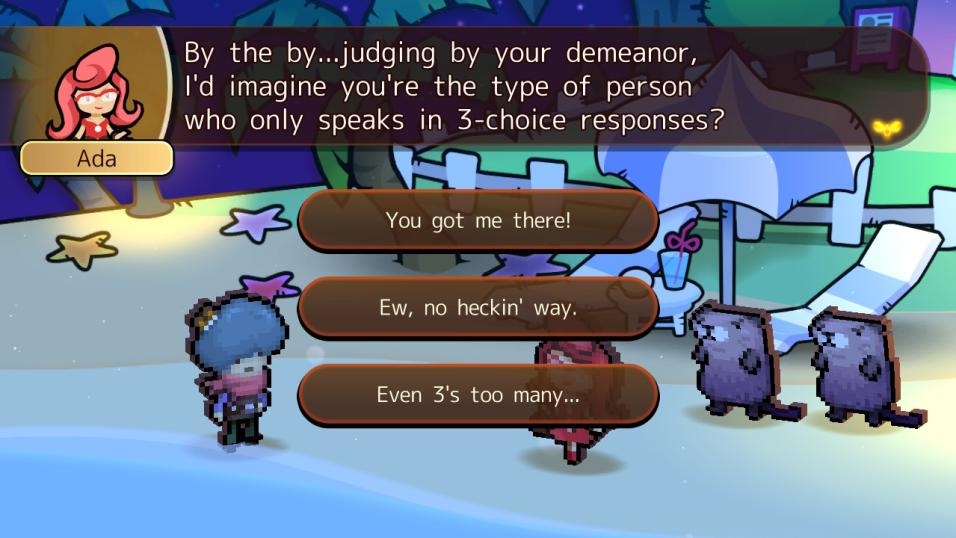 Strong Points: Funny writing that carries the plot forward
Weak Points: The main battle mechanics will get tiresome after a while; over-reliance on grinding
Moral Warnings: Cartoon violence and spells; frequent PG-13 level language like  d**k, b***h, and a**; some sexually suggestive conversations

In keeping with the tour guide theme, everything equipped by a character is a rental, and you’re responsible for purchasing the weapons and items the party will use. Each character has a specific limited-use skill that will help you on the battlefield; additionally, each weapon has their own specific limited-use skill that the wielder can utilize too. That said, you’ll need to be careful about abusing the latter, as weapons in this game can break if skills are used too much. As a rule of thumb, the stronger a weapon is, the more likely it will break if you keep using a skill.

As you progress in the game, you’ll be able to recruit more Tourists (party members) and train with them, whether in specific sidequests (which may require a certain character) or free quests (where you can bring anyone). By completing tours, you can collect $tarfish (which is the game’s currency), as well as level up your characters’ abilities and relationship with you (which in turn will open up character-specific sidequests). Pleasing tourists will also increase your player level, which will allow you to do things like carry more items with you when doing a tour. You can also collect furniture to furnish your room or give it to your party members in order to increase their satisfaction.

Perhaps the best part of Heroland is the sharp and humorous writing. The plot of the game is tongue-in-cheek and over-the-top, with characters being hammy and rather hilarious in their delivery. While nothing’s voiced other than some sound effects, the dialogue is endearing and the characters are a motley crew of cool people. Your friendship with 18 is probably the most important narrative arc, and it’s written in such a way that the initially spoiled prince grows on you as he gets subjected to demeaning situations meant to humble him. There were quite a few times I chuckled, especially with Otterman (who’s an otter that believes himself to be human), and some of the dungeon conversations can be laugh-inducing as well.

Unfortunately, the gameplay falls flat after a while. Grinding is necessary in order to not be underleveled, which is a problem since there is a variety of tourists you’ll have to train. If you think you’re going to power through with only one or two overpowered characters, you’re sorely mistaken. Some story dungeons require a certain tourist to be included in the current party, which means some of the weaker members will have to be trained in order to advance. 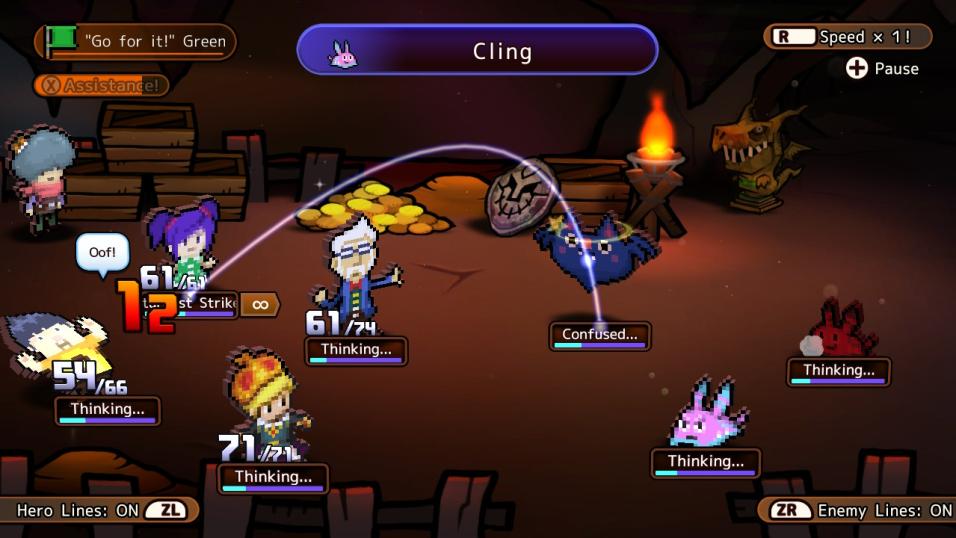 The biggest issue with the fact that you aren’t directly involved in battles means there’s a lot of waiting to be had here. This means you’ll be tempted to use the 3X time option in order to speed up battles. There were times when I just let the game run on easy free quests in order to grind and it just didn’t feel that rewarding. In terms of graphical presentation, the pixel art is unique and I did enjoy the 2.5D cutouts that were present in the game. The sound quality is adequate and while it’s inoffensive and serviceable, it’s not something that I’d listen to for more than I have to.

While it’s the strongest point of the game, most of the moral objections in Heroland come from the writing itself. While it’s rated T, there seems to be an abundance of PG-13 language used, with words like d**k, b***h, and a** used frequently. Thankfully, you don’t see f or s bombs, but the word Fae (used in context of a fairy) is often used in lieu of f**k. Some dialogue contains some dirty jokes and sexual innuendo; one quest featuring Oak requires getting hair of certain NPCs, and the character’s fascination can be taken as a bit perverted. Lucky is also looked down upon by a few characters because of his wealth situation (i.e. Lucky’s bankrupt and 18 gets a few jokes in at your expense).

Violence and magic usage is contextualized in the fact that everything done in tours is fake and participants (as well as enemies) are no worse for wear after it’s done. There is a bit of cartoon violence, with the fallen literally just falling down (in the case of enemies, they disappear and might leave treasure), but nothing explicit is shown. If it wasn’t for the mature content of the writing, this game could have easily squeaked by with an E10.

All in all, Heroland is a well-written RPG that is bogged down by its main gameplay mechanics. While innovative initially, it can get a bit tedious; if you’re not won over by the writing, then you might want to look elsewhere.