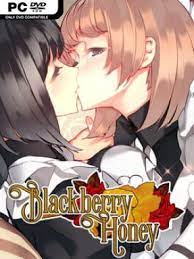 Originally released in 2017 on the PC platforms, Blackberry Honey is a yuri romance kinetic novel by developer ebi-hime. Kinetic novels are slightly different from visual novels in that kinetic novels have no choices to be made. It goes from beginning to end in a straightforward narrative. Yuri stands for “girls love” and is usually used for a sexual romance between two girls. That isn’t always the case as the yuri genre can and does have platonic relationships such as friendships and spiritual connection. Blackberry Honey is of the former, and I knew of this when choosing to review this rather controversial entry, despite knowing the audience of this website.

Taking place in 19th Century Victorian England, our protagonist Lorina Waugh finds herself in Bly, located within Liverpool. After being forced to resign from her previous position, Lorina now works for the Lennard family. Constantly working fourteen-hour days under the hate-filled and bratty Lady Constance, Lorina’s life is far from luxurious. Constance continuously takes her anger out on Lorina making her accomplish obnoxious tasks such as tending to the rose gardens without any tools or protection or forcing Lorina to obtain sweets that she turns her nose up to. Most days for Lorina consist of getting verbally abused by the royal family, long shifts, and every Sunday, attending church to receive the Lord’s blessings.

Lorina works with a half-dozen other maids such as the chubby and friendly Ada, the Swiss native Lieselotte who has many stories about her siblings, and the strange Effie who doesn’t speak often, but when she does, it’s always confusing. There are the two other maids Isobel and Pauline who have an antagonistic relationship with Lorina. They force her to do the chores they were tasked with to skip out on their duties and flirt with the valets. Last, and the most important, is the older Taohua, the mysterious maid who has been working for the Lennard family for longer than all the others. Her aloof behavior has Lorina annoyed at first, but after a while can’t help but be drawn close to her after Taohua stands up and supports her on numerous occasions. 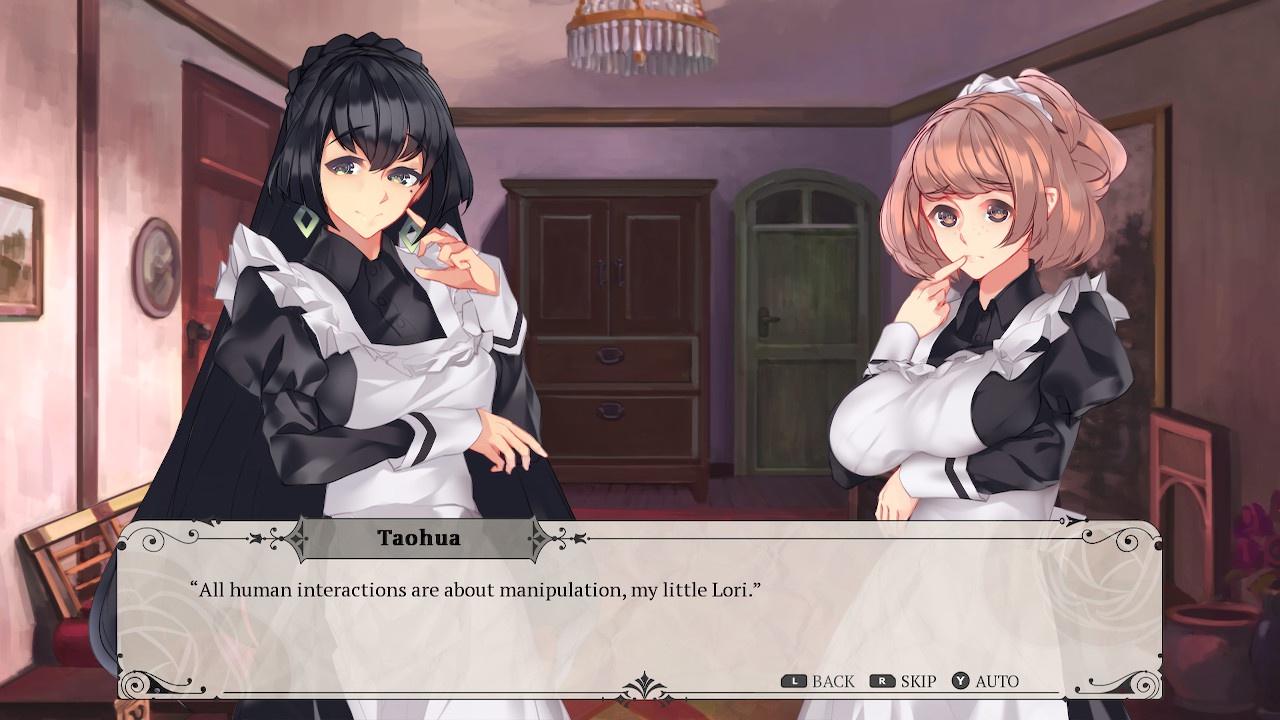 Strong Points: Eloquent dialogue; strong characterization
Weak Points: Some immersion-breaking moments; art limitations; seldom wants to delve into deeper issues while teasing the thought
Moral Warnings: Yuri (lesbian) romance; discussions about pre-marital sex; discriminatory language such as “whore”, “slut”, and “hussy”, as well as foul language such as “h*ll” and “b*tch”; a few descriptions of violence and blood; unfaithfulness and blasphemy towards God

Blackberry Honey’s main focus is on the blossoming relationship between Lorina and Taohua that starts off with a one-sided dislike and soon becomes love. The romance progresses fairly quickly as the entire story takes place during a six-month period. The two characters do have pretty good chemistry together and it does seem believable given their personality quirks; Lorina wants someone to confide in while Taohua wants someone to dote on. Another main relationship is between Lorina and Constance and explores the dynamic between master and servant. While Constance is abusive towards Lorina, the interactions between the two hint that Constance may not want to be this way.

The characters are multi-layered and nuanced and are well-written in nearly all circumstances. It’s very easy to hate on Lady Constance with her “holier than thou” attitude and the cruel methods she inflicts on Lorina, but she is given enough backstory and subtlety that a person can feel a little bit of empathy towards her. Lorina herself is designed as an attractive character and many within the setting comment on this aspect, but she doesn’t think so. She sees herself as rather plain and homely. Even Taohua is interesting, especially given that Taohua's name is Oriental in origin. She goes out of her way to help Lorina in many situations but is also very reserved to let Lorina return the favor. The other maids aren’t as developed as the three main characters, yet they’re given enough to work with that they are multi-layered as well. The dialogue hits the mark with the setting in most cases, but can sometimes break immersion at points as when the moments between Lorina and Taohua get more saucy, it can slip into modern language and terminology.

The backgrounds of Blackberry Honey have an art painting aesthetic to them. Developer ebi-hime took pictures of various locations inspired by the Victorian England era and commissioned an artist to use them as a reference. I find them to be lovely, and the fact that they are based on real-world settings makes the whole thing feel authentic. On the other hand, I’m iffier on the character design. They all have an animesque design to them, but are also limited in poses/sprites. Not every character has a full design, some are only seen from head to shoulder and others don’t have a portrait at all. The poses are also limited as they usually only keep one, with a few variations such as a hand movement here or there with some basic facial expressions. I don’t think it’s bad in a designed way as the color and shading are done well on the characters, but something about how the characters look feels uncanny to me. I feel it mostly has to do with how inconsistent the computer graphic (CG) scenes are, with how many of the characters are drawn as looking at the camera instead of looking towards a character or setpiece. On an other point, the music fits the setting of Victoria England using pianos and string instruments, as well as the organ for the church setting. This kinetic novel is voiceless so none of the characters speak or even make simple grunts. 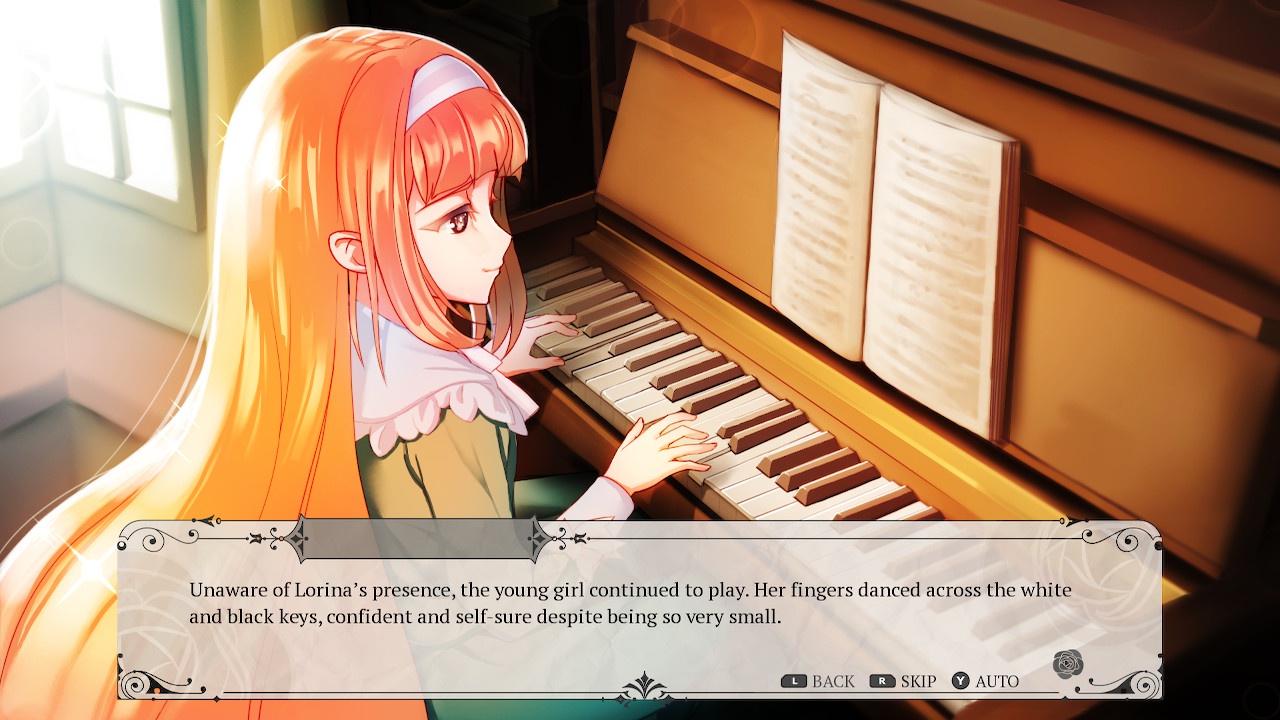 Hoo boy! Now we’re at the morality section, and as evidence of the narrative, there is a lot to discuss. In terms of violence, there isn’t too much. There are some descriptions of characters slapping each other or a few moments where a small amount of blood is drawn such as Lorina tending to a rosebush. Language amps up a bit more with foul words such as “h*ll” and “b*tch”. There is a lot of discriminatory language used such as “whore”, “slut”, and “hussy” that Pauline and Isobel say towards Lorina due to what happened to Lorina at her previous job. Taohua is also discriminated against due to her half-Chinese heritage and some characters call her a “savage.”

Sexual content is one of the biggest contributors to morality as many of the well-endowed characters are drawn in such a way that they are almost always cross-armed, putting your gaze towards their breasts. The maid outfits are also form-fitting and many CG scenes emphasize their breasts and butt. As mentioned before, this is a more sexual-based yuri visual novel with lesbian romance. There is plenty of kissing between two females, and Lorina and Taohua are quick to get intimate. (Sometimes, it can lead to cognitive dissonance as Lorina is taken aback that people view her as promiscuous—and yet, it was pretty easy for Taohua to sleep with her.) One scene shows Lorina in a bathtub with only a towel covering her bare breasts and her legs crossed so her genitals are obscured. There are a couple of scenes where they discuss their sexual moments together. A few moments of blasphemy do occur such as Lorina in a fit of anger “swearing to God” (but she does acknowledge this, as well as her relationship with Taohua). There is another moment in which Taohua is explaining her backstory to Lorina she talks about the time when she encountered another person “superior to Him.”

It doesn’t have to be said. I knew Blackberry Honey would be something from the getgo that the vast majority of this reading base would not get into, let alone even entertain the thought. It managed to be even more morally questionable than I previously assumed. So why did I choose it in the first place? There are many reasons as to that. Some are simple such as me liking the Victorian England setting. Others are way more complicated than that. But I also believe as a reviewer that it’s a good thing to cover something controversial every once in a while as it can potentially broaden your horizons.

Even so, my feelings on Blackberry Honey are very mixed after spending somewhere between eight and nine hours on it. I did enjoy plenty of aspects of the game as the characterization is done well. The usage of words and descriptions of settings and events are also nicely crafted. My issues with the experience are that at many times throughout the narrative, it seemed like ebi-hime wanted to tackle certain aspects such as Lorina’s conflict between her faith and her love for Taohua, the class system, and the grittier details of discrimination. Yet every time it almost does so, the narrative handwaves it and just says “eh whatever, here's more lesbian smut!” While Lorina develops in personality throughout the narrative, Taohua also comes across as a savior archetype and if it wasn’t for her, literally, then Lorina would be stuck in the same situation despite her growth. Even the conflict between Constance and Lorina is left unresolved. It is what it is. Blackberry Honey did set out and accomplish what it was meant to do—but whenever it could have been something more, it decides to opt for the easy way out.