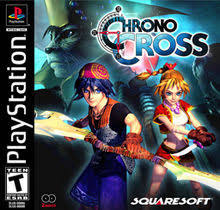 As a JRPG fan since I was very young, one of my favorite games has always been Chrono Trigger. I always wanted a sequel to come out, and it finally did in the form of Chrono Cross, though it didn’t feel like much of a sequel as I played it. After completing it, spending hours discussing it with friends, replaying it and reading over some of the dialogue and hints given throughout the game, it’s much more than a sequel but a conclusion to all the chaos caused by Lavos (the main antagonist of Chrono Trigger). In reality, many fans didn’t accept it as a sequel because Crono is not the main character, but only found in one place which I won’t spoil. Still, this game stands on its own in regard to story and gameplay whether you feel it concludes Chrono Trigger or not.

Chrono Cross is a game about a boy named Serge who lives in El Nido. He gets transported to Another World (this is the other dimension you can travel to, while his native one is called Home World) and discovers that he has died in this dimension. Nobody knows who he is since in that world he passed away as a baby, so he becomes confused as to how this is happening. He meets up with a girl named Kid who explains how the world was split into two ten years ago, and through her Astral Amulet they are able to jump between both worlds.

Their adversary, a cat-man with a large coat named Lynx, is after Serge and wants to kill Kid as well. As the story progresses, you learn about the Frozen Flame which is a powerful artifact from the past that can grant its wielder any wish or ability. Serge gets involved in the plot to stop Lynx and FATE itself from controlling the world and stopping time itself from being devoured. Eventually you learn about the mistakes that the heroes from Chrono Trigger failed to prevent, how Kid and Serge play the most important roles of saving a Princess from the ancient Kingdom of Zeal, and how to put an end to a plot that is already in motion to destroy everything. 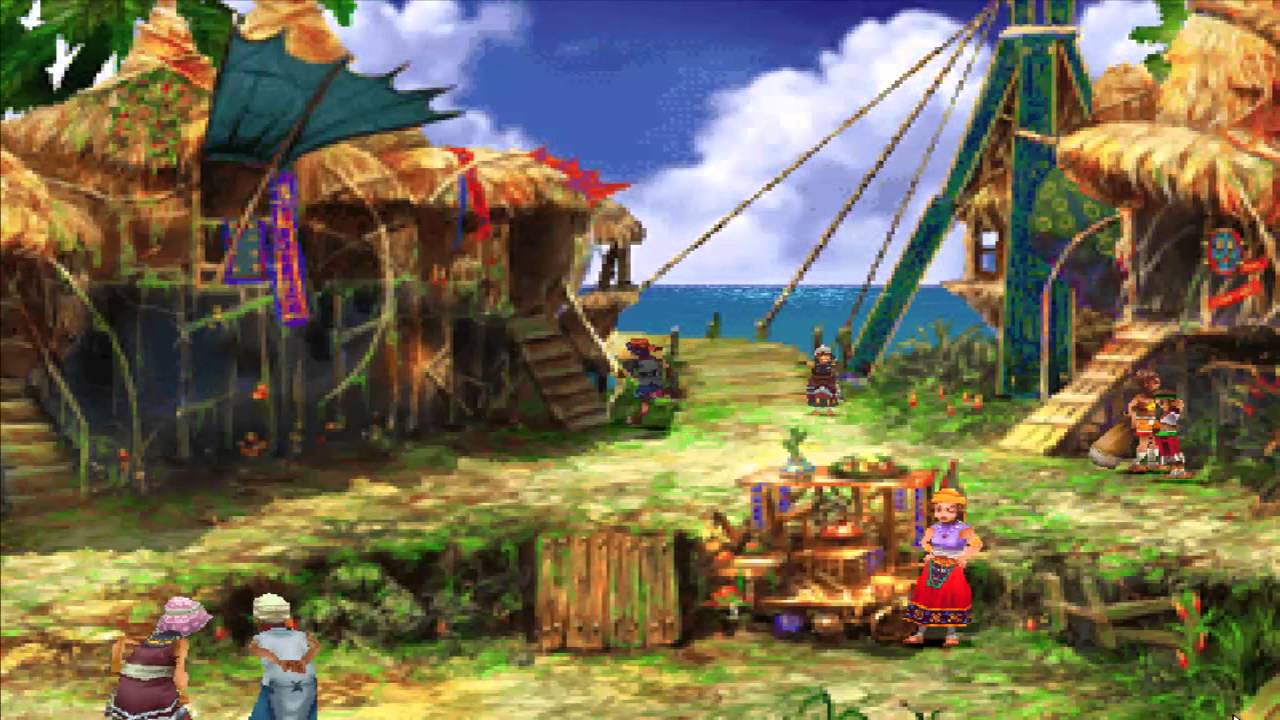 Strong Points: The gameplay is fun and the battle system is unique to this game. The music is excellent and is one of the best soundtracks of this generation of RPGs. It is a sequel to Chrono Trigger, though not the one us fans wanted.
Weak Points: This game’s weakest point is the plot. It’s very confusing, though it’s a sequel there isn’t a ton of references to the first game. There is so much going on, that by the middle or near ending of the game it’s hard to figure out why certain events happened or how to put the story together. Once you understand it, it makes sense and does wrap up loose ends from the first game but still, it’s not easy to do.
Moral Warnings: There are a few foul words like d*mn, but rarely and forgettable. Some characters have revealing clothing, but you can’t see much since the graphics are pixelated. There is an area in the game with bones and skeletons littered around while you explore, and there is idol worship to the “Dragon god” mentioned around the end of the game. Your characters don’t partake in any of that worship but it is discussed a few times.

Serge is the main character that you control throughout Chrono Cross, along with the many side-characters you can recruit. You travel on the map with an overhead view similar to Chrono Trigger, and random encounters occur when you touch a monster that is roaming the area. If you don't then you’re fine, but often they are placed in such a way where you have to fight them to make progress. Battles are turn based but you don’t have a time limit, unlike other RPG's where you have to make a decision quickly.

Elements play an important role in battle, as you need to equip them to each playable character. Each element is like a spell or ability, and they have different levels. They also have colors that represent real life elements like red is for fire, blue for water, green for wind, etc. You can use the opposite color for an advantage against enemies, but you need to check what each character’s base element is so that you match them with the right ones for extra power. Field effect during battle is when a battle has an element attributed to it and if you use that color, the attack will get a boost. So, if you are on a white element battlefield, you should focus on white element attacks for the win.

Traveling throughout dimensions is the core of Chrono Cross, just as time travel was for Chrono Trigger. Instead of jumping between eras, you must go between Home World and Another World to different locations to complete the game. It's very interesting to see each one because they are generally the same places with the same people, but they often have different dialogues and interactions. It's like meeting the same person in an alternate universe. You can also recruit new characters between both worlds, and what you do in one affects the other in various ways. There are 45 characters you can add to your party, and they come in all shapes, sizes and races.

Like Chrono Trigger, there is also the New Game+ option which is available once you beat the game for the first time. There are 12 endings you can watch depending on different decisions made throughout the story, so you can go through it several times. Think it might take too long though to beat? No worries! There’s a fast forward feature that you can use after you beat the game, and you retain your levels as well so you can pound through the game in a few hours.

This is a PlayStation One game, so the graphics are outdated, but you will enjoy the beautiful artwork for each character and the dialogue that goes with them. What’s also great is that many characters have accents or use different kinds of slang when they talk, so you get a personal feel for each one. The cutscenes are spectacular, but they are few and far between. The layout of the map when you go from place to place is like walking on a watercolor painting, which was very nice to look at. Each location has its own atmosphere to it, as the music flows well depending on where you are or what’s going on.

The soundtrack, done by Yasunori Mitsuda who also did the score for CT, goes to another level with this one. Just by hearing the music you could almost tell what kind of place you are in; from the villages to the dungeons to the somber pieces there’s a lot of emotion to each track. Personally, Chrono Cross has one of my favorite video game soundtracks. 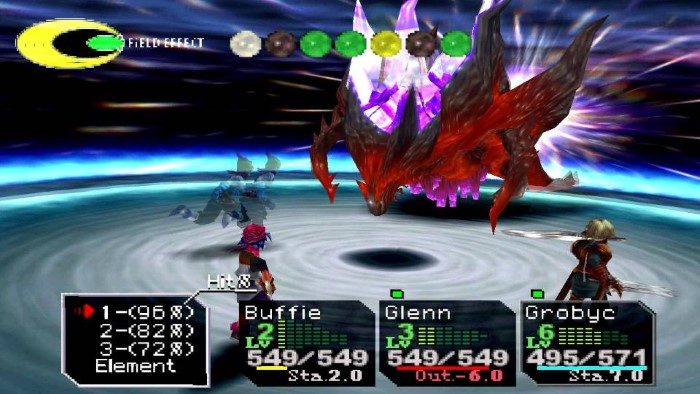 I have spent a lot of time looking over all the loose ends this game ties up, how it relates to Radical Dreamers (which was an old Japanese text based game that was meant to wrap up a plot hole in CT) and watching all the endings to understand everything that is going on. When you get to a certain technological place in the game, you discover a lot of the back-story all at once. Since there are various clues hidden throughout the story or only mentioned once here and there, it can be very difficult to figure out every plot hole.

Chrono Cross is a family friendly game, though there are a few cuss words here and there like d*** or hell, but overall the game is clean in its dialogue. Aside from Kid’s revealing clothing, there isn’t anything sexual to be concerned over. There are some points in the game where the characters will be drinking alcohol but it’s more referenced than actually done. Spiritually there is a lot going on. There is the worship to the dragon god later on in the game and discussions of life and death without a Heaven or Hell. Fate plays a large part in the game and somewhat negates the free will of the characters, having them instead follow a pre-determined path (best way I could explain it without spoilers). This is very important to the plot but it shows that God is not part of the plan nor of any importance. NPCs (non-playable characters) are afraid to be free to make their own decisions at one point in the game.

This is a game that every RPG fan needs to pick up and enjoy, as thousands of others already have. For those that wanted a literal sequel that looks and feels exactly like its predecessor, you’re in for a surprise as it went in a different, possibly strange direction. Chrono Cross stands alone as a great game with an amazing soundtrack, memorable characters, and a plot that is deep and complex. I used Chrono Compendium to help me understand what was going on in the game’s plot but be sure that you’ve beaten the game already, so it will make sense to you.

I hope you explore and enjoy Chrono Cross as much as I did! God bless.