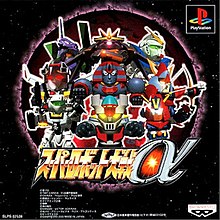 Note: This covers a game that requires a translation patch to play in English. This can be done legally on either a Playstation emulator or modified real hardware provided you own this title and any components of the actual hardware needed to run the game. This review was done primarily via PC emulation in the ePSXe emulator, though the game will work on real hardware with appropriate modifications. There are two patches for the game, the first is the original English patch by Gideon Zhi, the second is a bugfix patch by a modder called Archibald applied atop the original. This review will presume the use of the first patch only and append notes as appropriate for the other patch if both are used.

It's said that all franchises go through teething problems before they hit their stride, and once they figure out what works, they usually succeed or fail based on the quality of the content after they figure out the basic technical aspects. Super Robot Wars Alpha Gaiden is a game from when the series finally became what modern fans recognize, though with some mixed results.

The following series are represented, in whole or in part:

The story is set after the first SRW Alpha, though aside from some minor references which the game is nice enough to recap, the story is fairly standalone. After the Balmar War of the first game, and the detonation of the gravitational wave from the WMD needed to contain the threat from that war, Earth now must prepare to defend against the backlash to survive. There are those the heroes of the first war must stop so that all, not just a select few, will survive, or such is the idea in the opening chapters of the game.

The second half of the game involves the heroes being sent to an alternate distant future where they failed to achieve their mission, and while they seek to return to their own time, they discover old threats still scourge the future world they must take up arms against, and some of them seek to also return to their past to ensure mankind's eternal extinction in the process.

The game is a turn-based, isometric (unlike later games, the map cannot be rotated) strategy RPG. It takes place on grid-style maps interspersed with visual novel cutscenes and intermissions where characters and units may be upgraded. The campaign features several "route splits", in which different game paths with certain plot twists and secrets may be discovered. There is also a hidden "skill point" system, in which fulfilling certain battlefield conditions will earn points that can cause later maps to have different secrets and difficulty, and all later Alpha games canonically consider the "Hard" path (of 32+ skill points or more) to be the route later ones based the story on.

Unlike the previous Alpha, Alpha Gaiden features greatly improved game balancing (though a few units and levels retain their Alpha balance for reasons of difficulty and game design), support attacks by adjacent units, and since the game features the Xabungle plot, there is a "Bazaar" in which extra units and parts may be purchased with an in-game currency called "Blue Stones". To address a tedious and highly unbalanced issue with the game upgrade system from Alpha, all weapons on a unit are upgraded on one upgrade bar in incremental sequence as opposed to each weapon having separated upgrades. 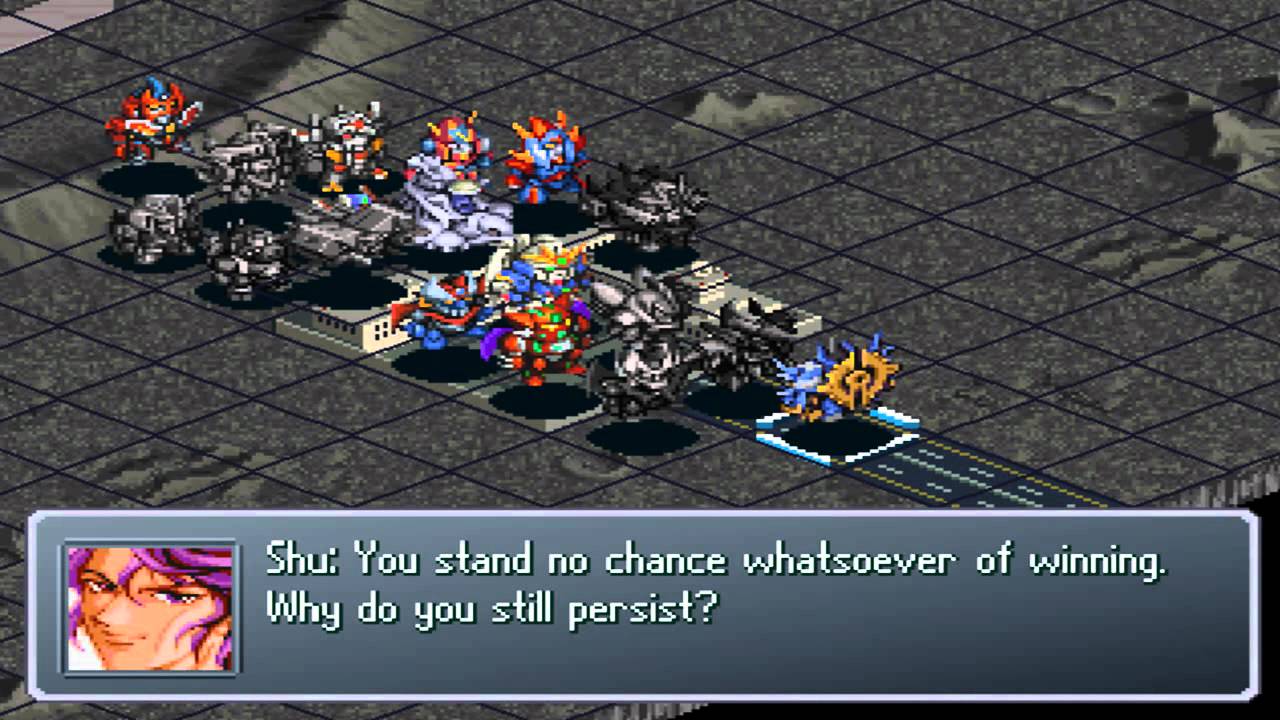 Strong Points: Excellent use of licensed series; quite challenging though fair
Weak Points: Some obviously unfinished content; game compromising bugs
Moral Warnings: Mecha combat violence against other machines and various monsters in self-defense; some PG-13 level dialogue; some sexual innuendos; one confirmed homosexual character (not portrayed in a flattering light, rather shown to be depraved); mentions of supernatural powers and demonic worship

Graphically, the experience is a mix of contrasts. Typical of the time of release, the battle graphics feature super-deformed versions of in-game units in a hand-drawn style with limited animation like the previous Alpha, though some of the new series introduced in this title have markedly improved animation, and some returning units got some enhanced animation details. The visual novel style scenes attempt to remain generally consistent with the animated style for all the licensed shows various character art depictions (with some scaling and touchups for returning characters). The level design, much like the prior game, has a varied anime-style look, though the second half of the game features a lot more harsh colors and darker ambiance to match the post-apocalyptic setting it's placed in.

The sound and music all go for maintaining instrumental renditions of the music from the licensed series in question. Most of the original music has either a futuristic synth tone or an ambient gothic one with some orchestral and vocal infusion. The controls are easily adaptable to keyboards if this is played via an emulator. Other PC gamepads can be adapted for PSX-style controls as well. Otherwise, when played on native hardware, the controls are generally quite intuitive and easy to learn.

Technically speaking, the game engine has all the basic components of what most modern SRW games have, but the game itself is not the most stable experience, since it was based on a modified version of the previous game engine (much like Fallout New Vegas is based on Fallout 3's engine and assets). Due to an apparent rushed development, there are some curious story errors, like a character appearing in a story scene when they should not appear briefly and some other indications of earlier story decisions not entirely removed from the plot. Several glitches shipped with the original Japanese release, including one bug that can cause the game to crash on a certain level if too many enemy units are allowed to spawn.

The basic English translation patch by Gideon Zhi is admittedly a "beta patch" and has some text display oddities (text randomly not showing properly) that do not cause issues with playing the game, but certainly will make menu navigation a hassle. These issues were present to some degree in the original game, but are magnified by the English translation patch. The Archibald bugfix patch fixes most of these issues and should be applied atop the Gideon patch to fix this issue, though the crash bug from the original game and some other minor glitches remain. To prevent the level with the crash condition mentioned above, playing on a PSX emulator with save hacking tools made for the game may be preferred to playing a patched version on real hardware, as the tools in question can be used to skip the level if the crash keeps occurring. 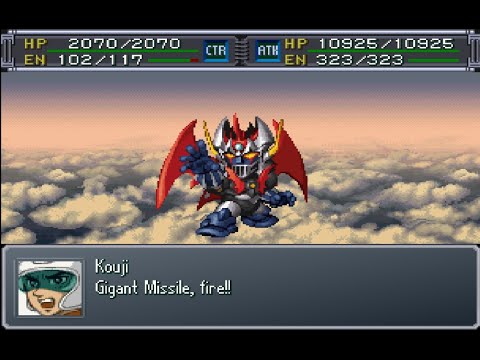 Morally, there are most definitely some issues.

Violence is an unavoidable part of the experience, involving mecha (or piloted robots) combat against various other mecha and some monsters. The violence is rather sterile, with no blood or gore and the remains disappearing after their demise. Your heroes take pains to avoid needless bloodshed, fighting only to restore peace. Peace talks and requests to stand down are attempted whenever possible by the same, only abandoned when it is obvious the enemy intends to ignore this out of hand.

Language isn't too severe, mostly around the daytime TV level, with only a few dips in PG-13 dialogue like b**t**d. There is some mild sexual innuendo, mostly from one female character who shows up briefly (and you can avoid a large portion of their crude dialogue quite easily via a story choice, and that's even on the route split you encounter them on the first time), but otherwise, it remains rather tame.

Sexual content is fairly low aside from the above, but there is one gay character who has a plot role. The game, however, portrays their homosexual tendencies in a very unflattering light, as the male they are attracted to is consistently disgusted, the rest of the cast is at best sarcastic to contemptuous of them for this, and while they start as a neutral character, they later become outright villainous. Both their evil ambitions and perversions are emphatically rejected as abhorrent.

There is one brief segment where a male crossdresses, but this is a legitimate disguise because their true identity could scuttle some important diplomatic talks. A brief bit of humor occurs when some guys who fail to realize it's a guy find them attractive (and they have the appropriate horrified reaction when they realize it was a male in disguise). Only the homosexual character mentioned above continues to find them attractive despite knowing the truth, which is portrayed as deviant and depraved.

This title is heavily focused on science fiction, though a few characters hail from a world of magically powered machines with animal-like "familiars" (who are not occult style familiars, more aspects of the minds of the characters given form to help pilot their machines). They operate with proper authority with the other heroes to oppose a villain who openly admits they want to murder several billion human souls to sacrifice them to a Devil-like figure, and your heroes to a man all oppose this as the evil it is. There are also characters with telekinetic/psychic abilities and machines that take advantage of them, though this is considered firmly in the realm of science fiction as a known science with military application. Ther is also one villain who claims to believe in Atum, the sun god of the now-defunct Nubian culture, but the claim and even their sanity are left an open question.

Morally and ethically, your heroes initially serve as a resistance to a corrupt dictatorship formed by a rogue faction in the first half of the game, and in the second half set in the alternate future, they work with all legal channels that operate in good faith while staunchly opposing anyone who intends innocents harm. The heroes have a standing moral in the second part to limit their actions in the future world to only do what is necessary to return to their time period while still not unduly harming the alternate future by their actions. Dereliction of duty by anyone is considered disgraceful and appropriately called out throughout the plot.

There is a notable subplot that does feature a good moral lesson. Since this game adapts the classic Mazinger and Great Mazinger series, they do a crossover modified version of the arc in Great Mazinger where the main character feels like being adopted makes him less a son to his father than his blood-related son. The game version is just as faithful to the original in showing that the mere fact of being adopted makes you no less family to someone with blood relations and that it's pointless and irrational to think any less of yourself simply for being an adopted child.

In technical terms, this is a very fun if rather challenging game, though it's hampered by quite a few technical issues that can cause severe issues. Morally, it's certainly got some issues, and while rated what would be the equivalent of Teen in ESRB terms it's certainly not a story for anyone save older teenagers and up. Overall, if you are a turn-based strategy fan, Super Robot Wars fan, or someone who wants to play in English one of the finest challenging turn-based game experiences ever created, and you are willing to put up with some bugs and archaic design choices, then this is one retro classic I highly recommend.