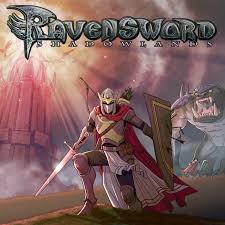 I tend to be a bit dismissive of mobile games as my ignorant self mostly doesn’t see mobile devices as a viable gaming platform, despite many critically acclaimed and highly-grossing games originating on the platform. Back in 2013, an action role-playing game by developers Crescent Moon Games released a product called Ravensword: Shadowlands. A lot of people described it as “Skyrim in your pocket.” That’s fine and dandy, but when you port over the “pocket Skyrim experience” to consoles, it has to be able to hold up to the competition.

The general story of Ravensword: Shadowlands is that after surviving a war, the protagonist has to find the three Ravenstones so he can summon the Ravensword to defeat evil. It’s a pretty simple narrative to get the ball rolling. You have your typical customization with a dozen or so selections for the face features, and you have the typical starting hometown called Aven where you can buy supplies. There's even a first and third-person view that you can toggle while playing.

What Ravensword does well is that the game is truly open world. It isn’t “open world” in the sense that you have some select areas that you can access from the beginning with invisible walls or NPCs blocking your path preventing you from going to certain areas when you’re not supposed to. Right from the beginning, you can go to any area in the game, except for a couple of very specific plot-relevant areas. Does this mean you’ll have success in every area? Of course not! Does this mean you may find weapons and armor that are far stronger than the part of the main quest you’re on? Of course it does! That’s the risk and the choice to make, so the true freedom on how to approach the game Is praiseworthy. Ravensword’s quest progression has nothing like a quest marker. You can keep track of what main and sidequests you have accepted, but you’ll have to pay attention to what NPCs say and the names of areas if you want to progress.

Unfortunately, Ravensword’s problems start to appear shortly after starting up. The user interface and menu navigation is terrible. It’s strange because the PC port of the mobile game has a nice, although standard UI and menu navigation. So, the console ports changed it and also made it worse. Your health and energy only appear when being hit or attacked, the menu is accessed by square for some reason and is a side-scrolling menu that goes through the items one by one. Also, the submenus such as the map is always at the end of the menu while the inventory is the first. It doesn’t save on what menu you were last on, nor does the selection loop around. So every time you want to see the map (which is very often) you have to press R2 five times to reach the map. 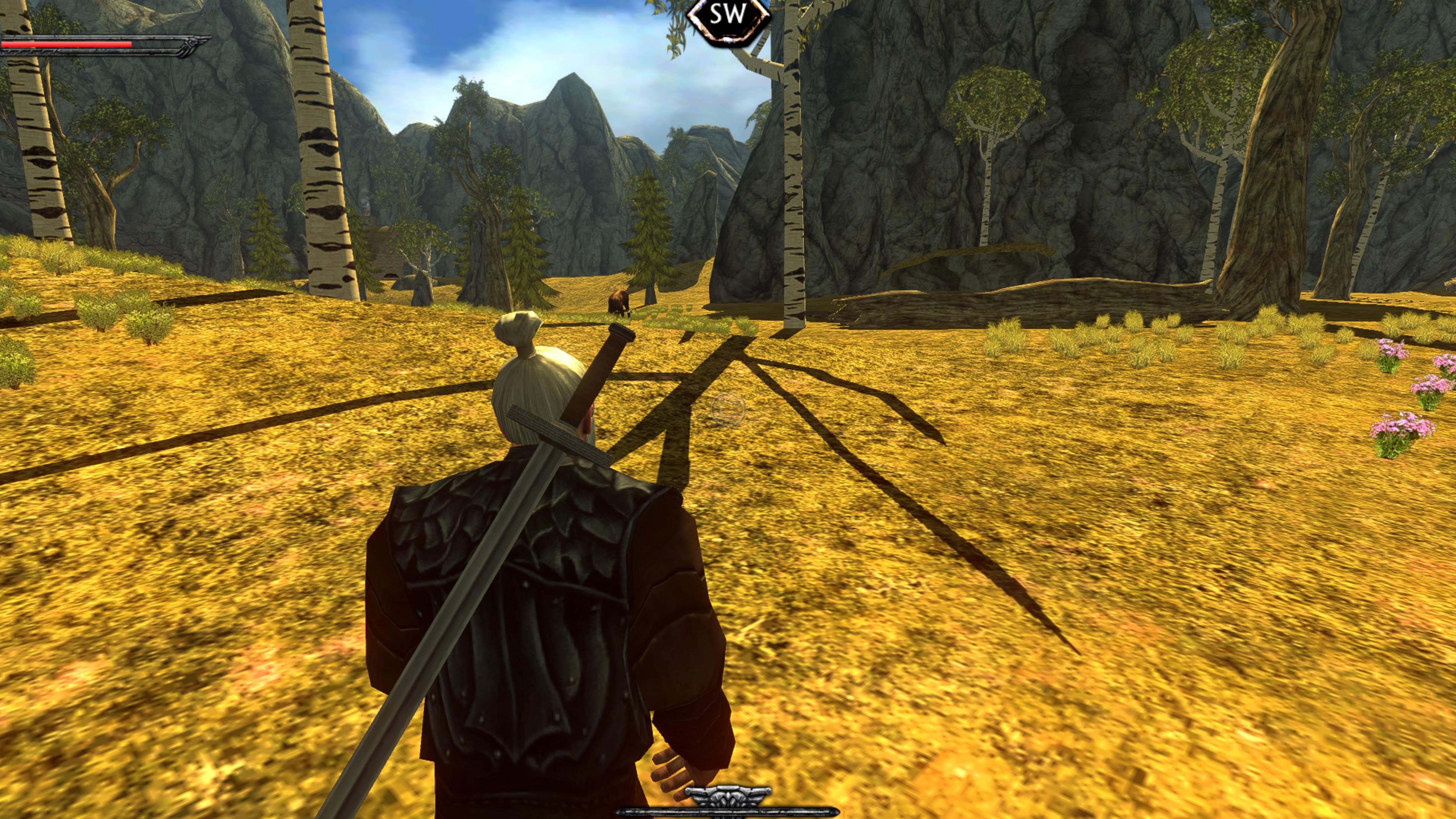 It doesn’t end there. When playing, you can toggle another map that shows the immediate area on your heads-up display. But not only is the map massive (taking up over 1/6ths of your screen), it has no borders around it. It looks so unprofessional and ugly, especially when the PC port had a border and a more detailed map. I don’t understand these changes that are simply objectively worse when a problem didn’t exist in the first place. In regards to sound design, it's very basic. There is some voice acting, but not all lines are voiced. Even stranger is that a character will begin speaking with a voice for half their dialogue, but then be voiceless for the other half.

With navigation and combat, your character has this quasi-tank movement. Moving forward and backward is quick while moving side-to-side cuts your speed in half. So you’ll be using both control sticks to move like a tank as it’s the best method of movement when enemies can and will swarm you. On the cool side, you get to ride a pterodactyl. Weapon variety consists of melee weapons such as swords, daggers, axes, maces, and clubs. Swords and daggers account for blade damage while maces and clubs are blunt. Axe is axe damage. Ranged weapons consist of crossbows, bows, and blunderbuss. Using these weapons will also increase the stats for the specific types. I don’t know exactly what they do but I assume they also increase damage to enemies. I stuck with using the sword for the majority of my playthrough as it has the fastest attacks. The other weapons are way too sluggish or have lots of delay between their attacks. With how ridiculous the difficulty can get in many parts, sticking to the most reliable methods to deal damage is for the best. There are also magic runes that are obtained during certain parts. Magic is mostly used to access specific parts in dungeons. They can have their use in combat, but you’ll have to heavily invest in the magic perks to get any mileage out of it.

The way stats are implemented in Ravensword, every level up you get to invest in one of four stats: strength, endurance, agility, and vigor. Strength is usually the best one to upgrade as not only does it increase your melee damage, but it also increases your inventory weight. Other ways to increase stats are to equip enhancement jewels to your gear. Keep in mind that once you equip a jewel onto a weapon or armor, you cannot unequip it. Added to this are skill points that you can invest in perks such as dealing extra damage with certain weapons, improving stealth, or improving magic. The whole thing is unbalanced because you’re best off investing everything into improving your melee prowess or survivability. 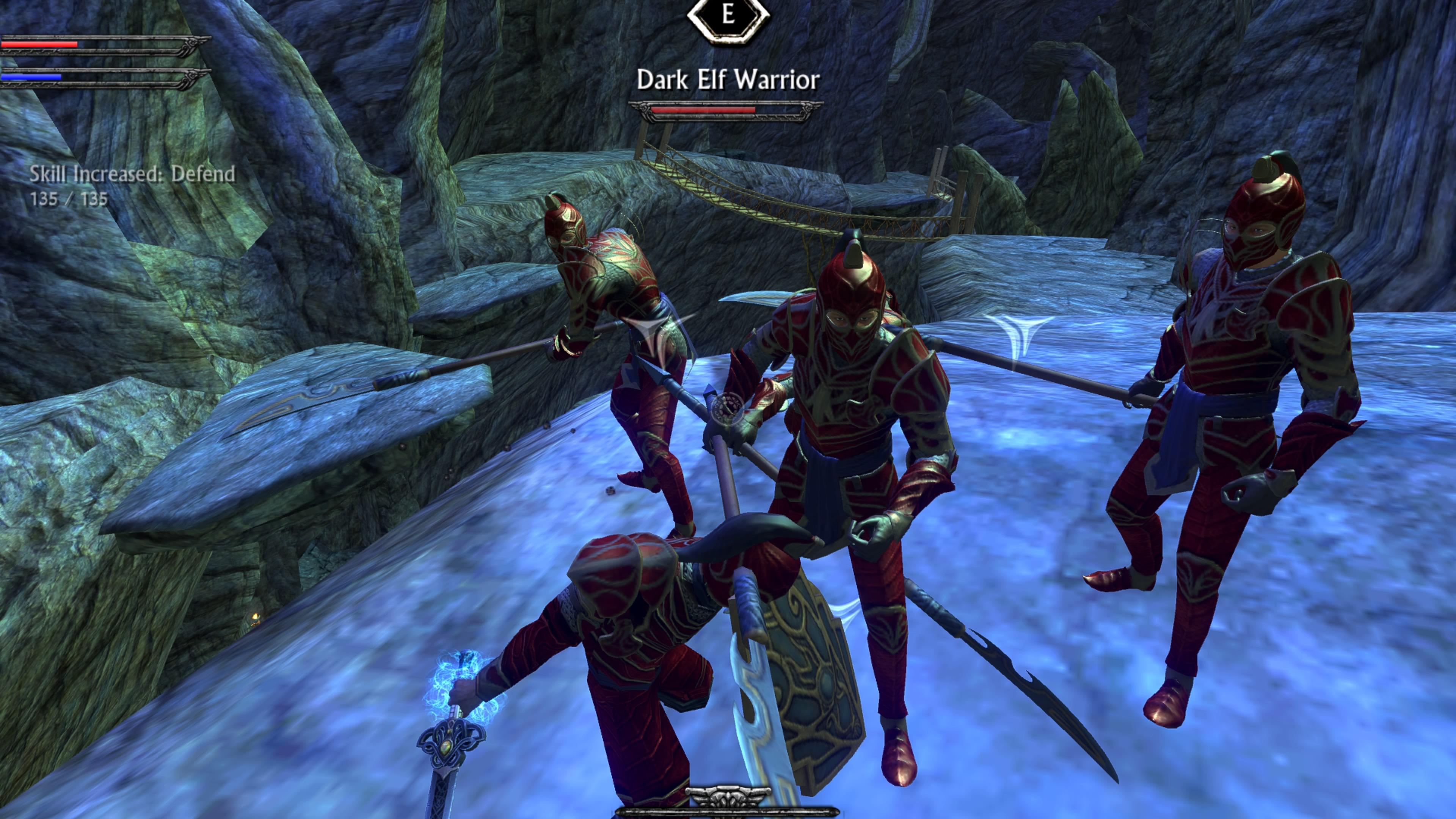 I understand it’s a mobile port, but the graphics are not good at all. They’re even a downgrade from the PC version despite those graphics not being good either. Textures and models are of low quality. There was no attempt to make improvements in terms of lighting or shaders. I also came across many glitches and bugs. Some are minor and funny such as ragdoll physics freaking out or dropped items enlarging to ridiculous sizes. Others are not so funny such as enemies becoming invulnerable to damage or menu glitching. Surprisingly, the game only crashed on me once. There are even specific glitches and collision bugs depending on whether you're playing in first or third-person.

Getting into moral concerns and warnings, it’s mostly the same as any typical magical fantasy setting. Violence mostly consists of using weapons to attack. Sometimes enemies bleed small splashes when hit. Magic is based on runes and uses stuff like fire, ice, wind, and darkness. Some supernatural enemies like zombies and ghouls can be found in optional areas. There is also the option to steal goods and break into houses.

Porting over a mobile game to consoles over ten years later is such a weird choice when very few changes were made to it, and the few changes are for the worse. I’m sure a decade ago, Ravensword: Shadowlands was a nice little concept—it just doesn’t hold up very well now, even for the cheap price. It’s a messy experience with balance issues, points where the experience is both too easy and too hard, strange controls, and an awful UI. I didn’t hate (most) of my time with Ravensword as I did feel compelled to complete it in its 8-hour runtime, but no urge to ever replay or revisit it. If all that was done in the span of ten years was to make a slightly touched-upon port and the main game wasn't even that good, then the real question is why bother in the first place?