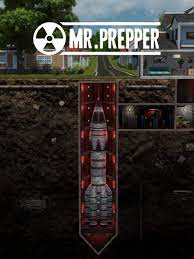 Thank You Ultimate Games for providing us with a review code!

I’m sure everyone has that one person in their life that is overprepared for any given situation—or the worst-case scenario. Mr. Prepper is all about that situation of preparing for the inevitable. In this case, the “inevitable” is nuclear warfare. The man known as Prepper has once attempted to escape the authoritarian town known as Murrikaville. They’re as keen as keeping people in as they are out because everything is just “perfect” in good ol’ Murrikaville. Prepper is already in trouble, so the next time he gets caught trying to leave, he’s gonna be thrown in the slammer.

Created by Rejected Games, Mr. Prepper is all about trying to get out of Murrikaville and surviving in the meantime. Mr. Prepper controls in a 2.5D environment via pointing and clicking in the style of such survival simulators like Fallout Shelter. Prepper will use his house as his base of operations as he slowly builds an underground area to create some sort of self-preservation. Eventually, Prepper gets the idea of building an entire rocketship underneath his house, becoming the main objective. All the while, he must keep the secret police oblivious to his objective, or else they’ll arrest him. Every day, Prepper will wake up at 06:00 AM and go to bed at around 20:00 PM at the earliest, while he must go to sleep at 03:00 AM. A full day in Murrkaville goes through the span of 24 real-life minutes.

The secret police member visits Prepper’s house at least once a week to check up on any suspicious activity, such as missing or out-of-place glassware, barrels of diesel in the open, secret lower floors, or even knives in your possession. Because Murrikaville is just so perfect, why would anyone need stuff like this? Depending on what is seen during these visits, the secret police may show up more often or be more attentive in inspecting. If the suspicion level reaches 100%, Prepper is arrested and the player must reload to the beginning of the day, or sometimes a few days back depending on how badly the player may have screwed up. I found it very interesting that the inspector even paid attention to things like glassware as any player would see it as free materials to scrap. 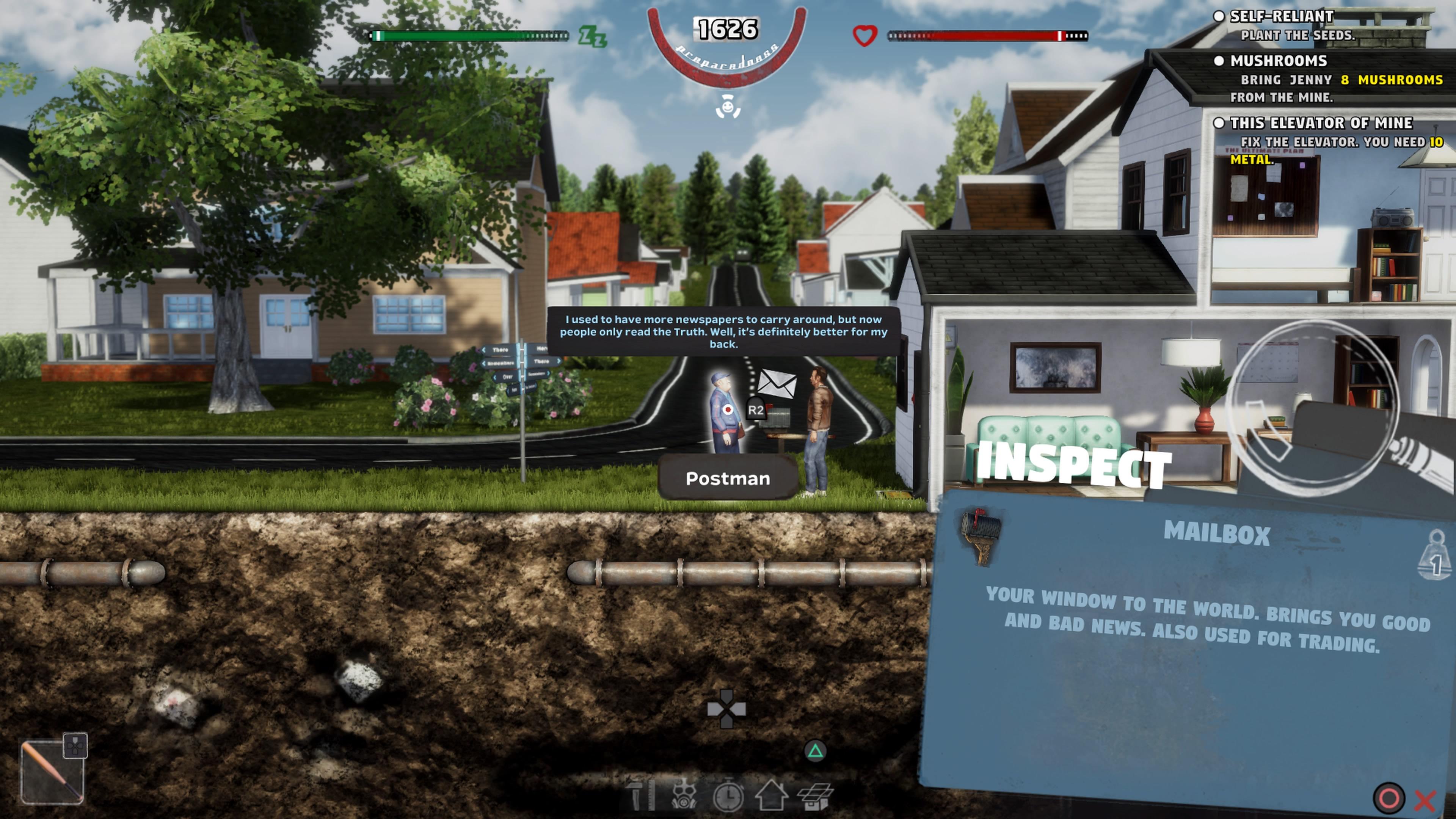 Crafting plays a major role in Mr. Prepper as it is the key to everything. You need to craft to create tools or disassemble raw materials. When your underground expands, you may even need to construct sources of power or light to grow plants. Crafting tools assist Prepper when he ventures out into places such as the forest, mines, and desert. Materials can be bought and sold to and from neighbors by using your mailbox, and interacting with them in these ways increases their trust levels for them, granting access to more missions.

The tutorial doesn’t do the best job in explaining Mr. Prepper’s mechanics as the explanation is more along the lines of the player using a mouse instead of the controller. Sometimes it’ll tell you to select certain things and tell you the button used to do so, but other times, it will expect you to do a tutorial by clicking it like you’re using a mouse, forgetting to explain that certain objects have to be interacted with by numerous button presses. I actually failed the tutorial for the secret police inspection because the game failed to communicate with me that I had to select specific objects like my ladder leading down to the underground and hide it with a carpet.

Missions are given out by a few characters that Prepper will interact with over the course of the game. You’ll find yourself doing a lot of these missions as your main mission may require a certain tool, but you can’t get that tool without doing something for Bob. It’s a lot of busywork and ironically, Prepper doesn’t spend a whole lot of time at his home. He’ll be out and about in the world as he collects materials and does odd jobs for the people. For someone who is effectively under house arrest, the authorities sure seem to not care where he goes. 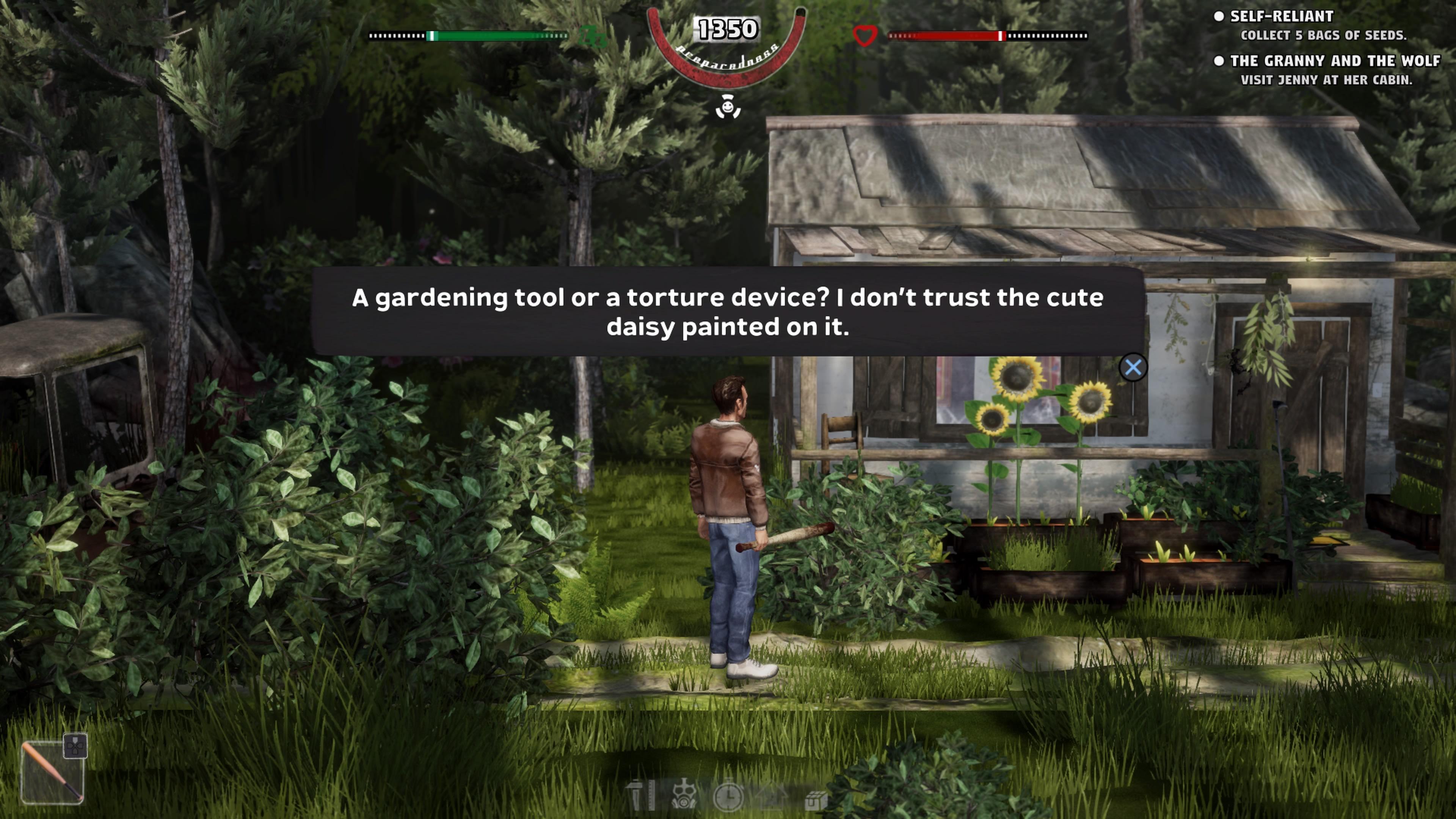 As it is a survival game, there are three meters for the player to maintain. There is the sleep meter, the hunger meter, and the preparedness meter. Sleep and hunger decrease as Prepper does his daily routine. Sleep is recharged by taking naps or by sleeping at the end of the day. Hunger is recharged by eating (pretty self-explanatory). Some foods may recharge both meters at once. The preparedness meter is special because it only starts decreasing when one of the two bars reaches 50% of its max (decreasing at a faster rate when both are below 50%). Preparedness can be refilled by various activities such as reading newspapers, crafting, or even sleeping. If the preparedness meter goes down all the way, Prepper will faint, and a few hours will pass. Too many times fainting will cause a game over. But something like that shouldn’t usually happen unless you go out of your way to do so as surviving in Mr. Prepper is quite easy due to all the potent methods you have to keep your hunger and preparedness meter up right at the very beginning. And it will only get easier as you become more self-sufficient and unlock more crafting recipes. Progression is very slow at first with constant back and forth between a few places and a lack of self-sufficiency. It’ll get more streamlined as time goes on.

Both graphics and music are simple and do what they’re meant to do. Neither aspect will be stand-out features, but they aren’t bad at all. The different areas are varied enough from each other, and the music mostly consists of country-like music.

With moral warnings, the most obvious one is that Prepper is actively rebelling against his own government as that’s the main theme of Mr. Prepper. He constantly goes against them to achieve his goals. Language is mostly mild, with some usage of “d*mn”, and “h*ll” used a few times, with exactly one usage of “sh*t” (in fact, it’s actually the very last word spoken in the game). Violence is only kept between animals as Prepper will wack wolves, snakes, and bats in the head with baseball bats or shoot them with guns. One that could potentially be debatable is that the NPC Jenny has a plot centered around helping a bunch of people called the Sleepless stay away after 3AM. She makes them tea containing mushrooms that “help the people stay away but unfortunately makes them lose focus.” It’s hard to tell whether it is a hallucinogen reference as teas made from mushrooms are a real thing. It is never stated that the mushrooms used in the mixture are either edible/medicinal or psychedelic.

Mr. Prepper is a fairly casual survival experience. There is never a point where you’ll get to an unwinnable situation unless you go out of your way to make several poor decisions. For the price, it can provide somewhere around 15 to 30 hours of entertainment before the credits roll. It can technically go on “forever” as there is no strict time limit to building the rocket, but the replay value is very low if you don’t love the experience outside of achievement hunting. Morally, it isn’t too bad and I did like it after a while, but I don’t have an urge to revisit or play any potential DLC. It was good while it lasted and I’m usually a person who tends to steer away from games that feel like work. It does have its appeal, and the people who like that kind of stuff will have plenty of love.