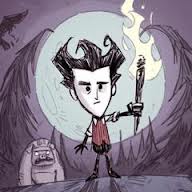 Crazy-haired, Tim Burton-esque Wilson has but one mission in life: not starving. While the premise appears to be simple, you will find that you must do everything from following a herd of beefalo to collect their dung to cultivating a hive of bees around your campfire to not starve. At the beginning of the game, Wilson is transported and trapped in a wilderness by a malevolent man with supernatural powers named Maxwell. Wilson finds that he must conquer and understand this strange world filled with bizarre and wonderful creatures in order to survive. This game is like a twisted kid’s book and you will have to learn its eccentric rules to see the next hand-drawn sunrise.

This sandbox survival game starts the player in a cartoony wilderness filled with resources to collect, animals to cultivate, and monsters to slay. The player views the action from an overhead perspective where you control 2D Wilson with mouse clicks or arrow keys. While you begin with nothing, you quickly harvest logs from trees, flint from rocks, and rocks from… well, rocks. Using these ingredients, you can make your first fire. This is pivotal to survival because when night falls every eight minutes, creepy shadow creatures stalk you and will kill you very easily if you are not close to a light source. Once you are familiar with the basics and keep yourself fed using the resources at hand, you can create more advanced equipment that ranges from a simple backpack to an ice wand. These new toys will help you keep your belly fed longer and also allow you to kill the harder creatures in the game. Death, which is permanent, comes easily in Don’t Starve because there are many ways to die. In addition to dying by starvation if you get too hungry, you must also maintain your sanity in the crazy world you live in. Your sanity is increased when you do “normal” actions like being close to friendly pigs or putting a flower hat on your head (strange but true) and decreased when you do crazy things like eat raw meat or hallucinogenic mushrooms. When your sanity gets too low, you start seeing large shadow creatures that can easily kill you so it is imperative that you manage your sanity just as carefully as you take care of your hunger. If you do happen to die, you are given a consolation prize in the form of experience points based on the number of days you survived. These experience points unlock additional characters that have diverse personalities like the pyromaniac named Willow or an autonomous robot, so replayability is naturally high in this game. 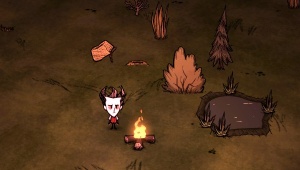 When you master the beginning wilderness, a special doorway can be taken to start adventure mode. You can take up to four items into this new mode and when you die in adventure mode, you respawn in the normal mode where you can stock up on supplies and try again from adventure mode’s beginning. This mode gives more structure to the game, but plays out in a similar fashion to the rest of the game. The main difference is that the new worlds you explore are modified to be much more difficult than the normal wilderness. While I had few complaints with this game, starting a new game after your character has died is fairly monotonous, but this also gives you an opportunity to play as one of the other characters. Before beginning a new game, you can adjust how many of each enemy, resource, and helpful creature the world spawns with, allowing you to fully customize the difficulty of the game. While this seems like a good addition in principle, there is no penalty for making the world easier or extra experience bonus for playing on a harder world, making the normal mode feel like the only legitimate way to play the game. Additionally, a streamlined or automated way of harvesting resources with late-game equipment would have been nice to look forward to. Thankfully, the game will be updated every 3 weeks with new content for at least the next 6 months.

The first things that you will notice when you launch Don’t Starve are its excellent hand-drawn-looking visuals and deep sense of character. Being endlessly compared to a Tim Burton movie, Don’t Starve has the same charm and twisted design philosophy as The Nightmare Before Christmas or Corpse Bride. Each of the playable characters, neutral animals, and enemies are well made and fun to interact with because of how they are animated. Finally, the game does a great job of showing your sanity decline with hazy graphical effects and giant shadow creatures endlessly following you. 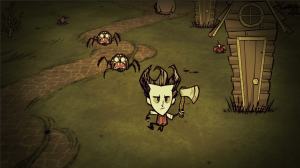 The sounds in this game fit perfectly with the art. Every creature makes strange and interesting noises, all actions sound like they should, and the subtle but effective music increases the immersion of the game. While I never had any of the music stuck in my head, it definitely added to the experience.

Unfortunately, there are a few questionable moral elements in this game. First, you can eat mushrooms that affect your sanity and eventually cause you to hallucinate. The player can create a variety of magical items that range from a necklace that will revive the player to a staff that can freeze enemy opponents. You can dig up graves to find valuable treasures. There are several altar-like objects in the game and one in particular is surrounded by pig heads on wooden stakes and will revive you when you die.

In the end, Don’t Starve is a twisted, magical world that offers a far different survival experience than its closest competitors. Additionally, this game has a great sense of character and new, interesting creatures and items are littered plentifully around the wilderness you must survive in. For those that can accept the moral content, I would recommend this game.