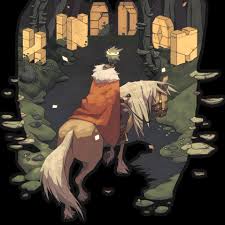 Kingdom: Classic is nothing short of well, a Classic. But let's start simple: The gameplay.

Kingdom's gameplay is an amazing mix of build-em-up/survive the night. To start off, you're a king or queen (you can choose after you start the game) who is trying to stay alive. If you lose your crown, the game will end. But we'll come back to this. In addition, this game runs on a currency system of gold coins. In the beginning, you're given an ample amount of around 10 coins. You can build your camp for 3 coins, and that will allow you to recruit members to join it. Now, let me explain how this game works.

Your world exists on a 2D sidescrolling plane. What this means, is that you can only travel to the left or right of the screen. And, don't get me wrong, this world is large, and it uses this mechanic in a great way. In the (rough) center of each world, is your camp. You can explore a good distance to the left and right of your camp. Along the way, you'll find buildings that can boost your fighters' strength, how fast you build things, upgrades for your buildings, etc. Another thing you can find is a peasant camp. Now, let's explain this mechanic. Every member of your group starts as a peasant. You can give them 1 coin and they'll join your camp. In the beginning of the game, you get 2 peasants at your camp you can recruit. After this, you have to try to find peasant camps to the left or right of your camps, and give them a coin to join your group.

There are 3 types of members you can have in your group. In the beginning of the game, you have the option to buy a hammer for 3 coins, or a bow for 2 coins. When a member of your camp picks this up, they become a builder, or an archer respectively. Builders, well, build. Builders can build walls (for a price) around the left and right sides of your camp. They can also build catapults, archer towers, farms and more.

Well, you've recruited 4 archers and a builder. You've built a wall on each side. But, now comes the night. Can you survive it? 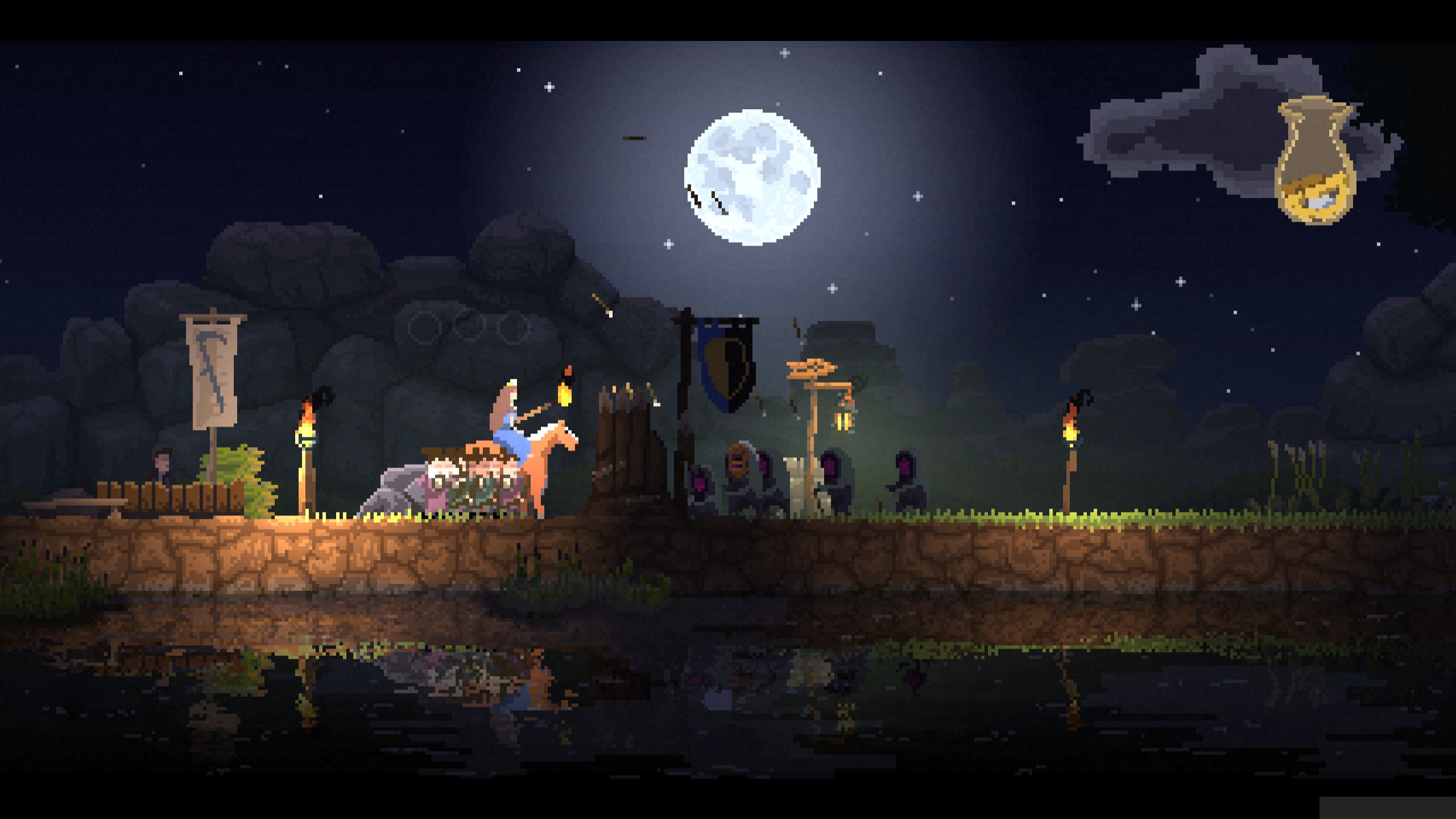 The Greed attacking at night
Highlights:

Strong Points: Beautiful pixel graphics, polished gameplay with great music and ambiance
Weak Points: After 15+ hours of gameplay, it can get a bit stale. Poor AI on some characters
Moral Warnings: None!

This game runs on a dynamic day/night and weather cycle. It can rain, it can be cloudy, it can be sunny, and it can turn from day to night. After each day/night cycle, one day passes. In the night however, comes the main enemy of the game: The Greed. The Greed are a sort of goblin-like enemy, that want nothing but money, or your crown. This is how you lose the game. If you're caught outside of your camp at night, there's a chance the Greed could catch you. If you have no more coins in your bag, they'll knock the crown off your head and try to take it. If they succeed, you lose, and the game restarts from the very first day, with nothing built. This is where the challenge of the game comes in. You have to explore, to try and recruit more members, while also making it back home. This gameplay isn't very unique, but it does it in such a unique way that it makes this game a lot of fun, even for a short time.

Now, how do I earn coins, you might be asking. It's simple. In this game, you earn coins via three different ways. Chests are one of them. At the end of each night, and the beginning of a new day, you'll receive a chest full of around 8 gold coins. In addition, there are chests hidden in the world (usually two) that can give you 10+ coins. You find these by simply walking the world and discovering them. The second way is to kill animals. If your archers kill a deer, you get 2-3 coins from it. They can also kill rabbits, which give 1 coin each. The third way, and the third member of your group, is farming/farmers. Builders can create a farm outside of your farm, and you can recruit peasants, and buy a scythe for 5 coins. When they pick up the scythe, they become farmers. Then, they go to work on the farm planting crops. After a few days, they harvest the crop and give you 4 coins. Usually 4 farmers can operate on one farm.

Phew, that was a lot of work. Now, let's move on to something more interesting. Those graphics.

The graphics in this game, are quite literally, pixel perfect. For lovers of the NES/SNES/Genesis style of graphics, this game takes that art style and turns it up to 11. It takes a simple pixel art style, and makes it absolutely beautiful. The hand-crafted foliage and architectural detail make this look great. With amazing animations, clean colors, and entrancing water effects, shaders and light make this game something like a cinematic masterpiece. For fans of games like Hyper Light Drifter or Stardew Valley, you will with utmost certainty love this game, if only for its looks. I'm giving this game a 7/10 for it's looks, but this is my opinion as I love the pixel art style and how detailed it is.

Time to talk about this game's best feature: The music. Where do I even start with this? Classic's music is an amazing mix of nostalgia, swelling synths, ominous undertones and perfect chords that can change your entire view on this world. After each night, usually a song starts playing, one of the several great songs in this game. It seems that although there are huge differences between each song, they all come together to make your experience even better and more memorable. I said up there that this music feels almost nostalgic, because the composer was so good at this it feels like you already know it by heart once you've heard it. 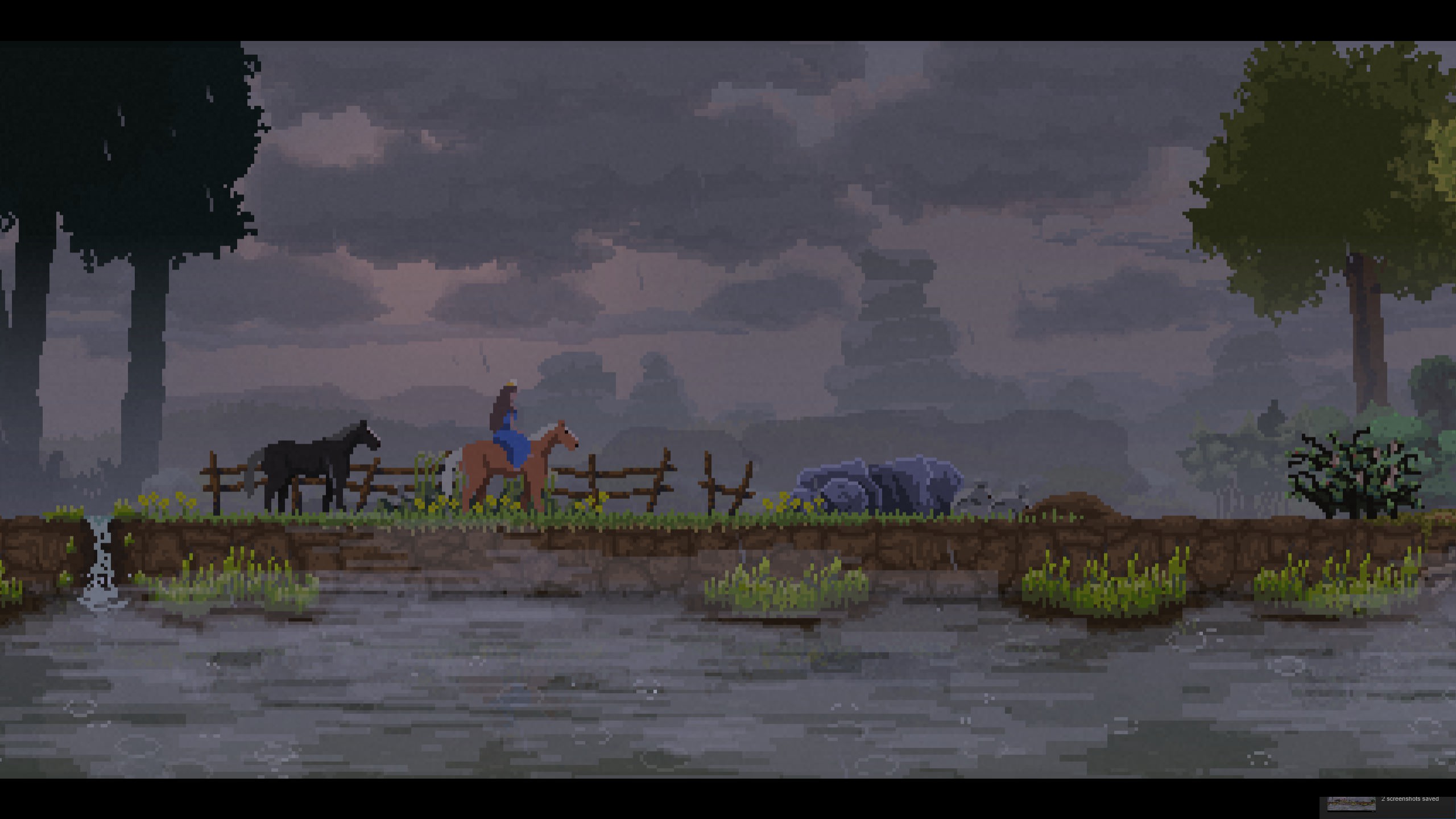 Those beautiful graphics
Score Breakdown:
Higher is better
(10/10 is perfect)

In addition, the game's ambiance is good. With little sounds like your horse galloping, the water running, the grass ruffling as you run by it, the sounds of people as you come into your camp; it all comes together to make a strong atmosphere that you can feel and envision.

The controls in this game are very precise, and simplistic. All in all, you only use 4 keys in this game (5 if you count Escape to pause it). You can choose to use the standard WASD or arrow keys to move and interact with people and objects. The controls have no perceivable input lag and feel very fluid. In addition, controller support for this game is A+. If you're the kind of person that likes to play from a couch, know that this game works fine with controllers. Now, let's get onto the general and moral cons.

Generally, this game has a slight issue with AI. Sometimes it can work well, and sometimes it seems like your villagers are monkeys with keyboards. Graphically, there are also some issues. It appears that light sources put off an abnormal amount of light that make character sprites look really bright, almost white. While this issue (most likely bloom) was fixed in Kingdom: New Lands, it's still a slightly annoying thing to look at, and as such I will dock a point for it. In addition, the gameplay does get a little stale after your first or second win. There really is a point where the content runs out, and you simply can't find more to enjoy. Kingdom: New Lands has almost 3 times the content of Classic, but it also has even less intelligent AI, when it comes to some characters.

Morally, I see nothing wrong with this game. There's no language, there's no sexual content, there's no real violence or gore, but you do kill the Greed in self-defense as they want to take your crown and harm your villagers. Its pretty much a clean game. The Greed, I suppose, are the only real suspicious part of this game, as they are sort of dark goblin looking characters that come out of red/purple portals.

So, in closing, Kingdom: Classic is an underrated gem that combines polished gameplay, dazzling graphical technology, enchanting music and atmosphere to create one perfect package.

- God's Gaming's Contempt, urging you to play this gem.