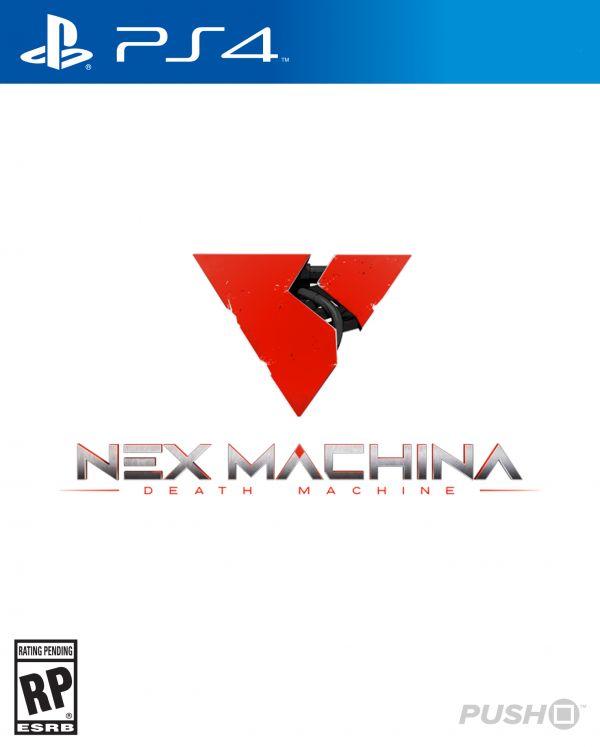 I give my sincere thanks to Housemarque for a game code.

On a peaceful day in 2014, Housemarque wanted to make another game to fund their meatball supply. So they speed dialed Eugene Jarvis of Defender, Robotron, and Smash TV fame and asked him if he wanted to collaborate with them to make some sort of Frankenstein monster of a game. Obviously Jarvis said no so Housemarque was forced to take drastic measures and kidnap the man and made him work on a video game against his will. Out of this experience came Nex Machina.

Nex Machina, influenced by Jarvis’s and Housemarque’s previous works, is a twin stick top down shooter with heavy arcade elements. It stars some sort of Mega Man looking astronaut guy or gal and the goal is to maybe save humanity from the robot menace. Well, the “story” (if you even want to call it that since the narrative is non-existent) is extremely vague; for all I know, I could be playing as the bad guy and committing genocide against a peaceful robotic civilization while they try their best to prevent their eventual demise. They really left it all up to the imagination.

Anyways, once you start the game, it immediately throws you into the action with a 2-3 second scene of your character zooming down a freeway and landing into an area where three basic enemies suddenly want to end your life. There is no tutorial; the game without warning expects you to know what to do, which one would if they bothered to read the controls. The controls are actually very simple. Left stick is to move, right stick is to shoot in a direction. L1 is to dash and R1 is to use your sub weapon. Even if the control scheme is simple, the game itself is pretty complex and has a lot of depth to it. The player character even feels good to control as the character has very precise movement and stops on a dime. As you goes through the stages there are various power ups that you can pick up from defeated enemies or item boxes. These power ups range from giving you more consecutive dashes, to extending your weapons range, to even giving you a shield. Not only do each of these power ups give you better chances at survival by augmenting your character, they also augment your primary weapon by giving it more spread and damage. The sub-weapons range from a sword, to a rocket launcher to even a remote detonated bomb. The weapons all feel that they have a kick and weight to it such as when one uses the laser sub-weapon, the aiming and movement is slowed. 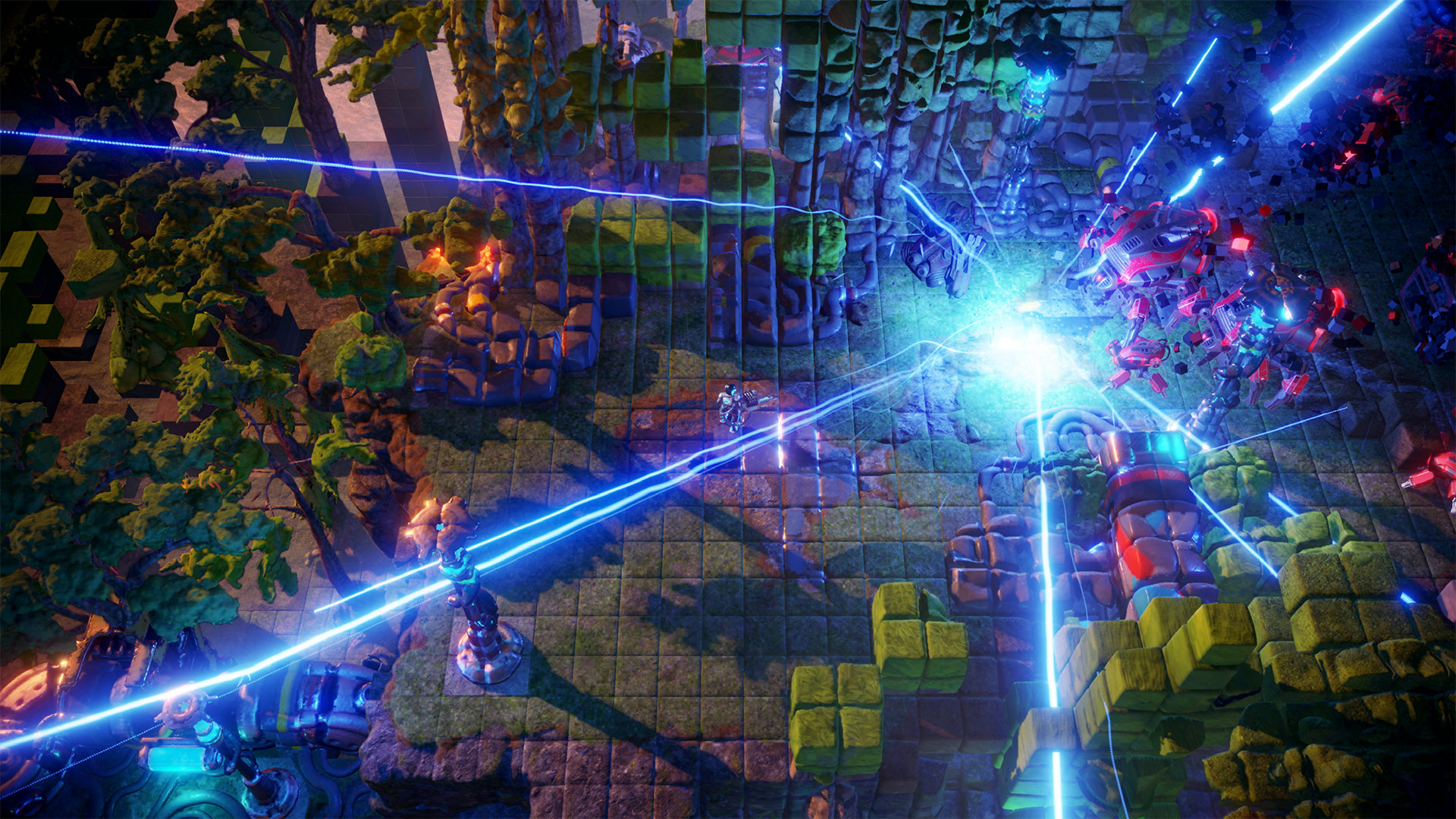 Strong Points: Difficulty settings are much more than just inflated numbers; smooth, fast, and frantic; loads of secrets; insane amount of replay value.
Weak Points: No online co-op; online arena lacks a bit more than expected of it.
Moral Warnings: Mass destruction of robotic lifeforms; the humans you can optionally save can potentially die in a pretty violent fashion.

Nex Machina has 6 main levels, with about 15 sub levels contained in each of them. Once all the enemies are destroyed, you are transferred to the next sub level. At the end of the level you face against a boss who does everything in its power to halt your progress. Within these levels there are humans to save and they can vary between 3 and 6 humans per sub level. You are not required to save the humans but the humans are essential if you want a high score. The humans resemble these fat looking people who aimlessly walk around, playing on some sort of handheld device, completely unaware of the danger that is right in front of them. It makes one think that if they are this stupid, are they truly worth saving? Going back to high score, Nex Machina is big on the score as each enemy nets you points, not dying in a sub level nets you points, finding the various secrets in the sub levels net you points, and running out of lives completely depletes your score. The enemy variety in Nex Machina is surprisingly well thought out and put together. There are enemies that simply try to rush and swarm you, there is another enemy that shoots lasers and missiles at a distance, and even one that has a giant drill that can potentially block off paths. Housemarque has masterfully blended these assortment of enemies together in a way that no one level feels the same as another.

In terms of graphics, every enemy stands out from one another with a bright red color and shape. All enemy projectiles are a hot pink color. Your character has a bright blue aura around them. The humans are a mix of white and green. All of these features stand out as visual representation is a critical component of shoot em ups. Everything that is to be avoided is clear and noticeable. The game also took liberties with its graphics as well. Instead of enemies blowing up in a generic orange and grey explosion, the enemies actually explode in a multitude of voxels while if you die, you explode in a bright neon display. These death animations give the game a sense of uniqueness and flavor. The voxel explosion doesn’t only apply to the robots, it also applies to the destructible environments too.

Throughout my many hours of play, I’ve never had the game at any point slow down on me, or witnessed a crash. It’s an extremely stable game as a constant frame rate and visual stability is crucial for a game such as this. The sound in this game is crisp and distinct, with a female voice announcing certain things in a sub-level such as if a special enemy spawned or if you picked up a powerup, among other things. She isn’t completely needed, and one probably wouldn’t notice if she disappeared, but it's a nice little thing to have. The enemies also have notable audio queues as you can almost tell what enemy is on a stage if it's even off screen. The soundtrack is based on synthwave, which complements the game very well with it being a futuristic setting. I liked the beats that are showcased, but in my opinion, outside of the catchy credits song, none of it really stuck out to me which for the type of game it is, that’s actually a good thing. This will lead into my next point. 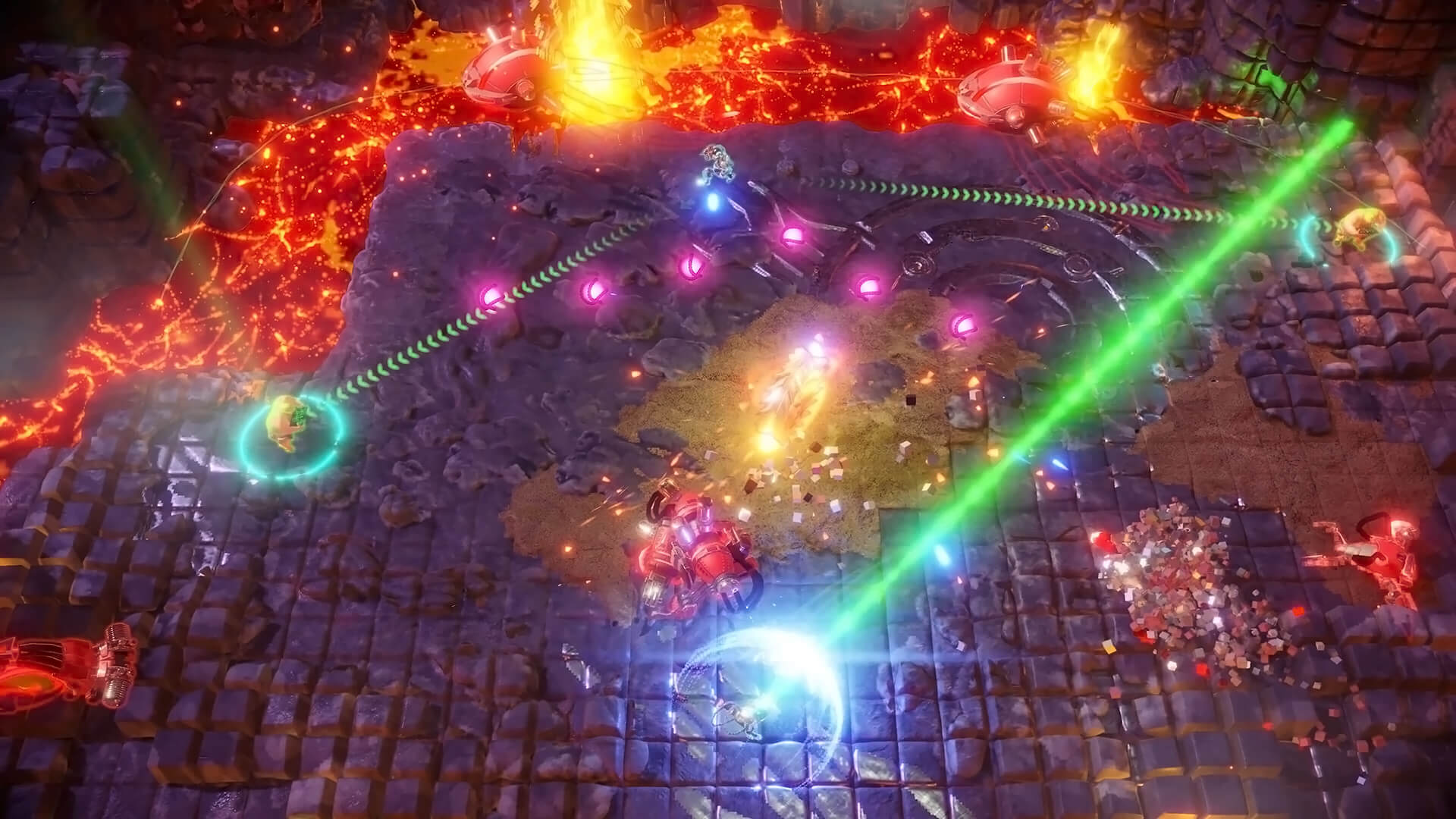 Nex Machina is not an easy game. It is mean, cruel, punishing and even at times unforgiving. Sure there are multiple difficulty settings, but if you only play this game on beginner, you’re doing yourself a disservice as it is not a good or clear representative of the game at all, and the fact that the game won’t even let you play the last level if you play on beginner. The game starts off easy enough, teaching you the mechanics and what it expects of you, but after the second level, the game quickly ramps up in its brutality with so much effects on the screen and so many things trying to kill you at once it can be overwhelming to the point of mental exhaustion. The game is fast paced and demands your attention 100% of the time, especially against the later bosses who throw so much pink at you, that you need precision and finesse to get through them. There are actually 5 difficulty settings with two of them being unlockable. Each difficulty setting progresses in a good rate as well. The harder settings do not only just inflate numbers, it also makes enemies faster, more aggressive, and even gives them special attributes upon death which is what I love to see in difficulty settings.

There are some morality warnings to be noted of in this game. It is violent first of all. Many robots were harmed in the making of this game. They explode a lot, and you also explode, a lot. There is also a certain enemy that targets the humans scattered throughout the levels and the way they kill the humans is pretty graphic. If you fail to save the human in time, the robot claws away at them and blood pours on the ground, and the blood itself looks fairly realistic, which is pretty unsettling in a game filled with neon lights and voxels. Unless you’re really trying to look for it like I did one may not even notice the blood as they are simply trying to survive.

If you’re a one-and-done kind of game player, you may want to look elsewhere for video games. Nex Machina is extremely short, clocking in just about an hour to see the credits. It is also a game for people who like and crave a challenge and I wouldn’t recommend it to casual players either as they might get too frustrated and rage quit. For people who replay games, Nex Machina has a crazy amount of replay value with its own built in achievement system called “feats”, leaderboards, the online arena, secret sub-levels on every level (as well as enemies), a local co-op mode, and even a bonus final boss for people who are tough enough to 1CC (Credit Clear) the entire game. There is just so much to come back to and every play through is just as exciting as the first. I wished there was a few more things added like an online co-op portion or that the online arena mode had some sort of survival mode but these issues are minuscule to the amount of good Nex Machina did.

Nex Machina is easily one of the best games I have played this year and one of the best shoot em ups I have ever played in general. It's like the developers looked through the history of shoot em ups and combined all the good parts of all the popular and critically acclaimed ones and blended them into such a pristine work of art. It oozes with so much style and passion that I fell in love within the first minute, and made me go though so many emotions: anger from dying against the standard final boss, locking me out of the bonus boss, happiness from actually completing a 1CC play-through, and excitement from playing such an adrenaline pumping game. Just be wary of kids or others playing this game as the blood shown in the game is pretty realistic compared to everything else and the game possibly being too hard for the average player. If you like shoot 'em ups in any sense, you owe it to yourself to buy Nex Machina. A game like this deserves to be played.