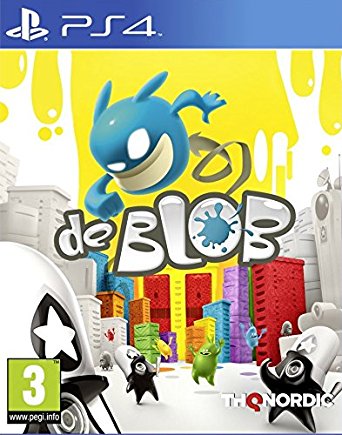 Thank you Nordic Games for sending us a review code!

At first, I thought de Blob was a Splatoon knockoff, but then I realized that it predates it by seven years! de Blob was originally released in 2008 on iOS and Wii. The gameplay and visuals remain the same though the cutscenes could have benefited from being remade since they are a bit blurry and pixilated on higher resolutions. I haven’t played the game on the Wii to compare the controls, but they are functional though not as precise as we hoped for on the PS4. Other than these nitpicks, I found this game very cute and am happy to finally have it in my library.

There are three game modes: Story, Free Paint, and Blob Party. In order to unlock more levels in the Free Paint and Blob Party modes, you’ll have to complete the ten story levels. The story mode is timed and has enemies to contend with. If you simply want to paint buildings without worrying about enemies, challenges, or running out of time, then you’ll want to do the Free paint mode. In Blob Party up to four players can compete against each other in various mini-games to tag the most buildings in their chosen color. 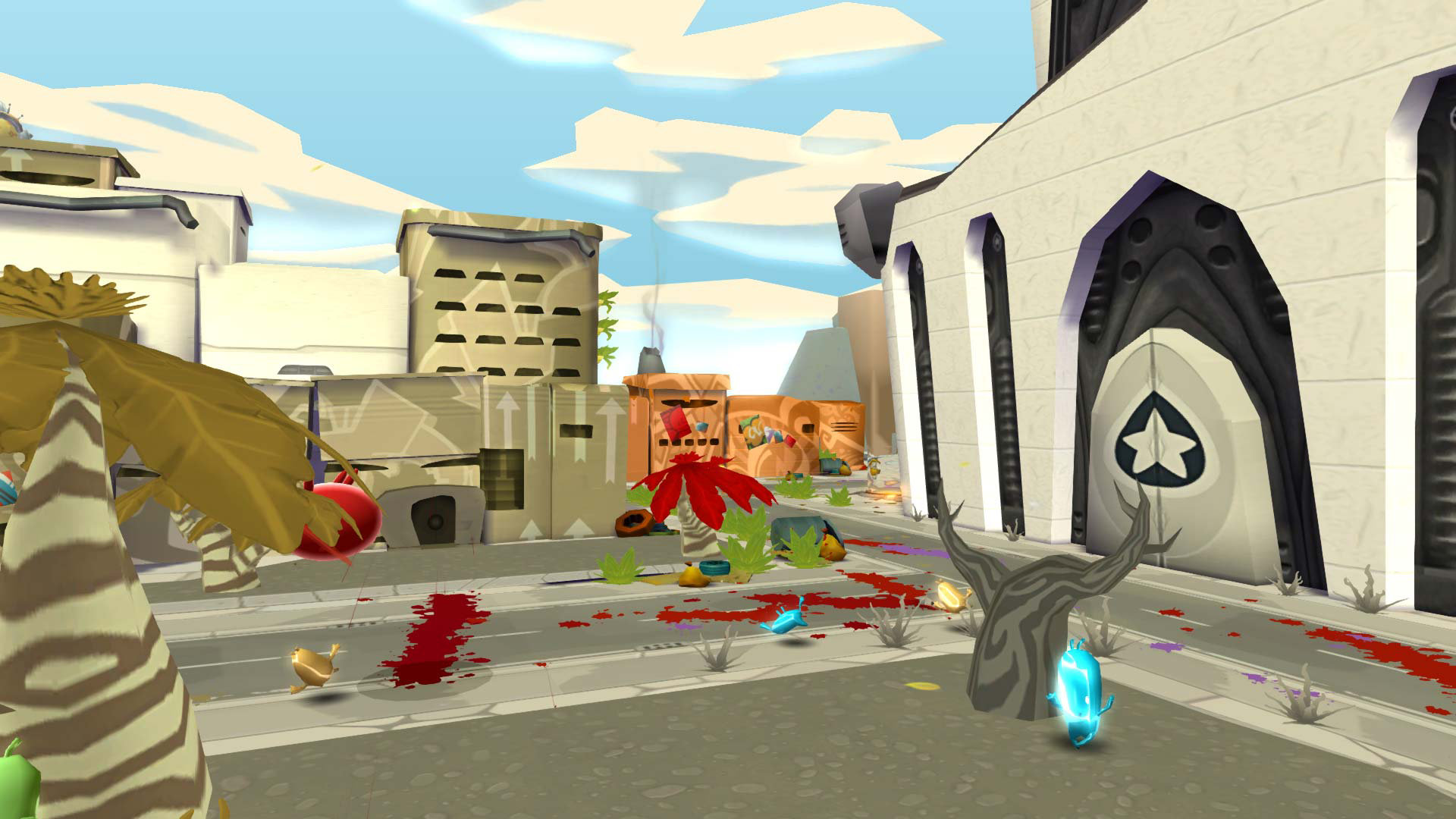 Strong Points: Fun gameplay for people of all ages
Weak Points: The movies are poor quality and should have gotten a makeover; floaty controls that are not very precise
Moral Warnings: Cartoon violence

If you’re stuck playing solo, the Story and Free Paint modes are quite fun. The story is short and sweet where Chroma City was invaded by INKT creatures that sucked away all of their vibrant colors. The color revolution was born and their goal is to bring vibrant colors back to their city. You play as their champion, de Blob.

In each level, you only have a limited amount of time before INKT catches up to you so you can’t dilly dally. While I never completed all of the optional goals, I never ran out of time either. While there are usually a couple of time extenders scattered in the levels, more can be earned by completing challenges and by liberating Raydians. In order to liberate Raydians, you have to restore color to all of the buildings in a group. Once that’s done, the creatures trapped inside will come out for you to restore their color back to them. Challenges comes in different difficulties and usually require you to paint certain buildings a particular color within a short amount of time. The harder difficulty challenges may have obstacles in the way like puddles of ink that can hurt De Blob or water that removes his paint color and supply.

Each building, tree, or wall costs paint points to color them. De Blob can only have a maximum of one hundred paint points at a time. The paint points are replenished by collecting the red, yellow, or blue paint from the paint bots roaming the streets. More colors like green, purple, and orange can be created by combining the primary colors. 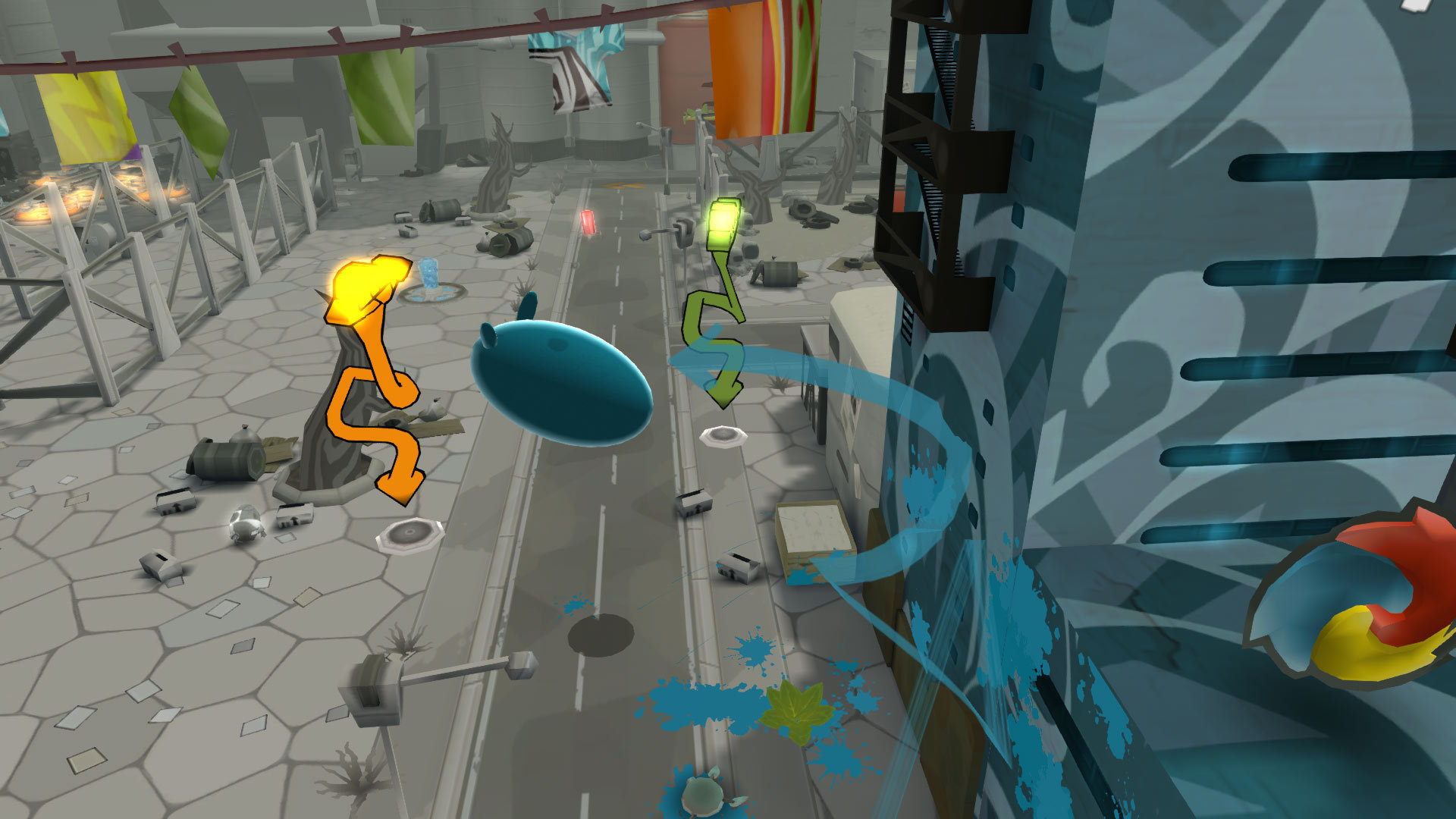 In order to clear a level, various gates must be opened by colorizing the area and completing challenges. To open the exit portal, a certain objective like reclaiming a landmark must be completed. After leaving a level, you’ll be rated by the percentage of the area you colorized, how many Radians were liberated, how many challenges were completed, and so forth. Depending on the results you are awarded a gold, silver, or bronze medal.

I like how each level lets you choose the mood music for it. What’s cooler yet is that the music changes and gets more complex as you switch paints and colorize the buildings. The soundtrack is really great in this game.

As mentioned earlier in the review, the visuals are not optimized for higher resolution screens. While everything else in this port runs fine, it’s a shame that the graphics didn’t get a much needed overhaul.

In the end, de Blob is a fun game that can be enjoyed by the whole family. The retail price is $19.99 and I have seen it for half off on Steam if you prefer the PC platform. I look forward to the sequel that will be releasing on consoles soon.