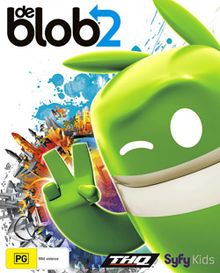 Thank you THQ Nordic for sending us a review code!

I haven’t played the de Blob games in their original format and I am glad for the re-releases so my family can enjoy these classics together on the PS4. de Blob 2 was originally released in 2011 on the DS, PS3, Xbox 360 and Wii. The DS version is a bit different than the console version and I haven’t played it so I can’t comment on the gameplay. More information about the releases can be found here.

There are two game modes: Story and Blob Party. In order to unlock more levels in the Blob Party mode, you’ll have to complete the eleven story levels. In Blob Party up to four players can work together and complete various challenges.

The story continues from the previous game where Comrade Black was exiled to an island. He managed to escape and has been stealing the vibrant colors away from the nearby cities. de Blob has been summoned by the professor to add color back into this world and to put an end to Comrade Black’s shenanigans once and for all. 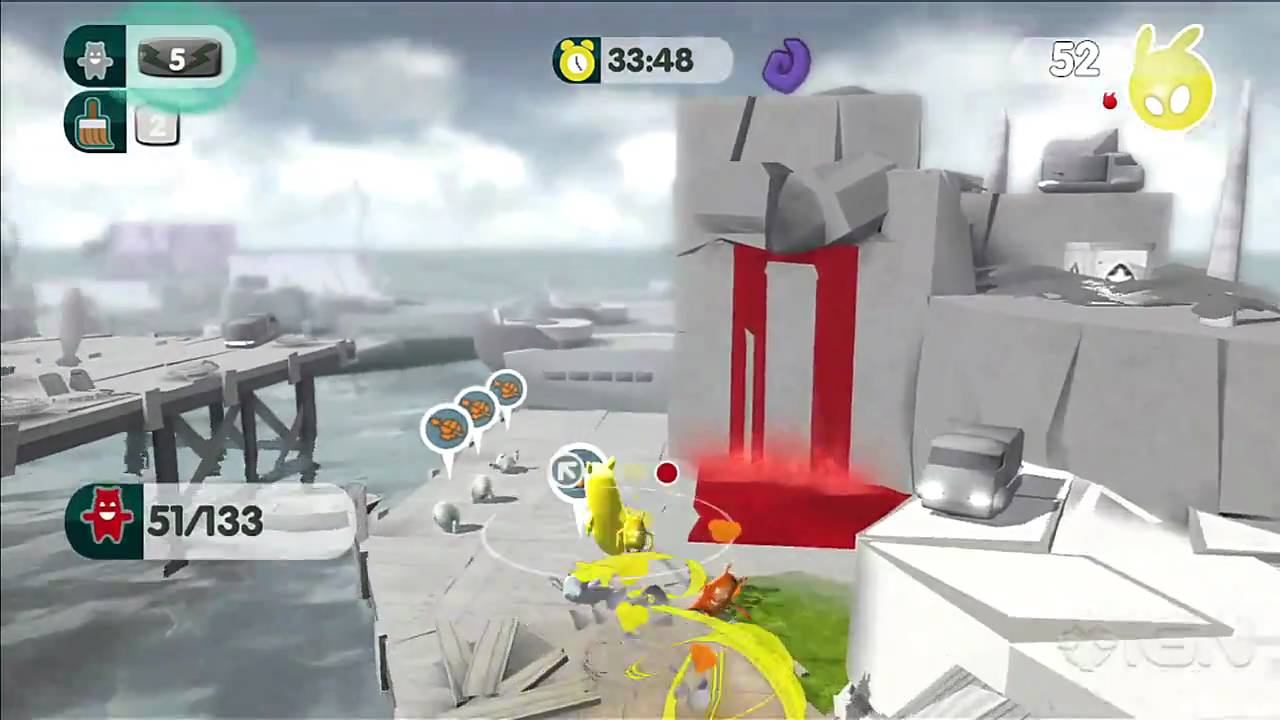 Strong Points: Fun gameplay for people of all ages
Weak Points: The movies look better than de Blob, but are still not high resolution; not as many music options as the original game; repetitive gameplay
Moral Warnings: Cartoon violence; potty humor

Before you begin the story mode you’ll have to select a difficulty which cannot be changed in the easy mode. On the easy difficulty you start off with more time and lives. In each level, you only have a limited amount of time so you can’t dilly-dally. While I never completed all of the optional goals, I never ran out of time. It also helps that there are usually a couple of time extenders scattered in the levels; more can be earned by completing challenges and by liberating Graydians. In order to free Graydians, you have to restore color to all of the buildings in a group. Once that’s done, the creatures trapped inside will come out for you to restore their color back to them. Challenges comes in different difficulties and usually require you to paint certain buildings a particular color or eliminating tougher than normal enemies. The harder difficulty challenges may have obstacles in the way like puddles of ink that can hurt de Blob or water/tiles that remove his paint color and supply.

Each building, tree, or wall costs paint points to color them. de Blob can only have a maximum of one hundred paint points at a time. The paint points are replenished by collecting the red, yellow, or blue paint from the paint bots roaming the streets. More colors like green, purple, and orange can be created by combining the primary colors. One new addition to this game is a second player character named Pinky that can give de Blob some color and shoot some enemies down for him. This is especially handy for the UFO-like creatures that drag him to the nearest poisonous ink puddle. In this title, de Blob isn’t the only one that has to deal with ink baths. There is an ink cult that baptizes their initiates in ink and de Blob must put an end to their heinous acts.

Another new addition is collectible inspiration power-ups. With inspiration you can upgrade de Blob and Pinky’s stats and ammo levels. More platforming challenges are found in this game and they typically revolve around triggering switches while being a certain color. Some of the platformer levels end with a boss-like stage so be prepared with plenty of ink ammunition. Some new power-ups make defeating enemies and bosses a lot easier too. 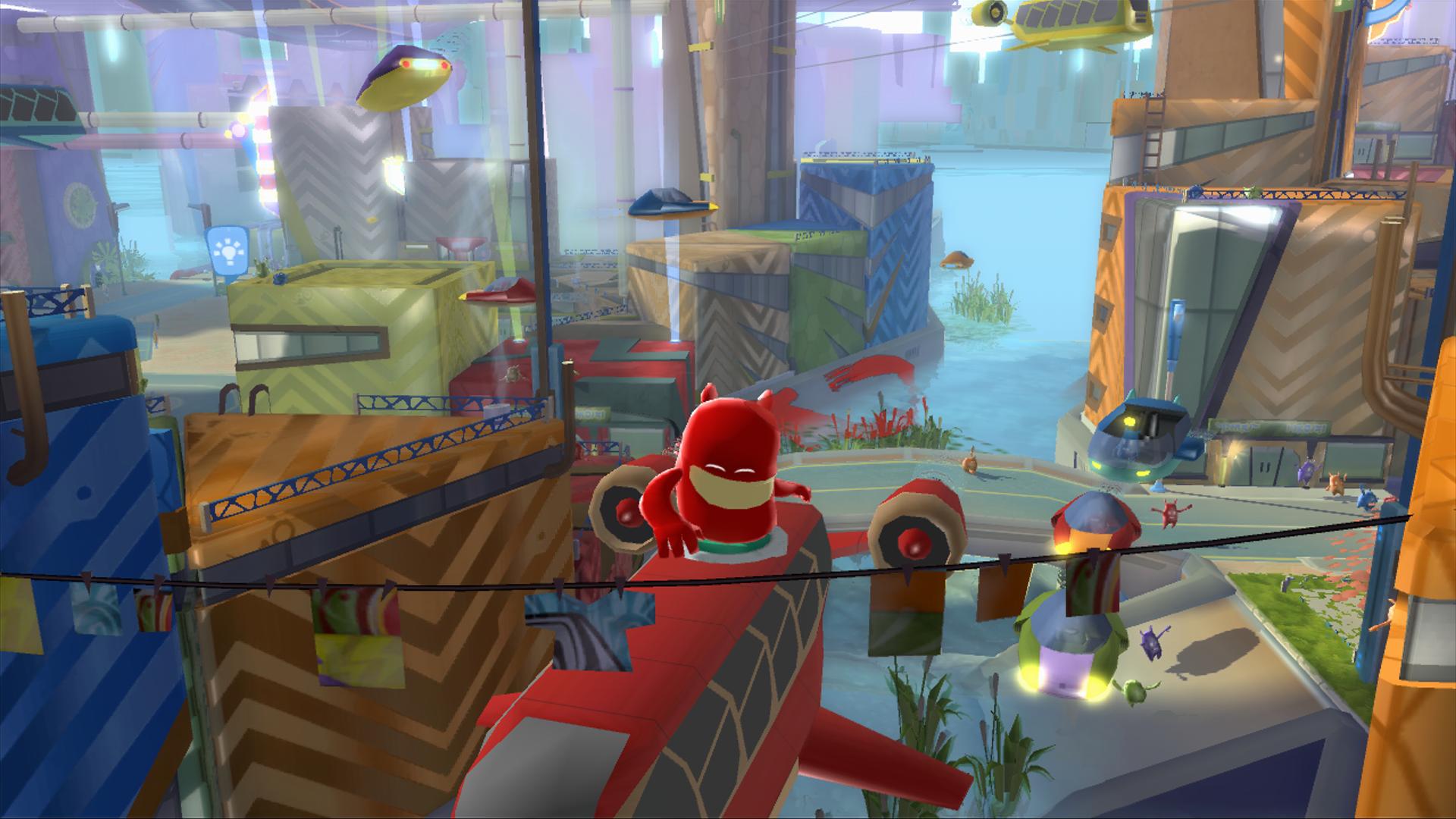 In order to clear a level, various areas must be transformed by colorizing the area and completing challenges. To open the exit portal, certain objectives like reclaiming a landmark must be completed. After leaving a level, you’ll be rated by the percentage of the area you colorized, how many Graydians were liberated, how many challenges were completed, and so forth. Depending on the results you are awarded a gold, silver, or bronze medal.

As the world gets more color to it, the background music becomes livelier. The music is still great and not surprising as de Blob’s composer, John Guscott, worked on this title too. My only complaint with the music is that you cannot change level tracks as you could in the original game. Like the previous game, the voice acting is still gibberish.

The cut scenes in de Blob were noticeably pixelated and low resolution. Though the movies in this title were not nearly as bad, they were not high definition. Everything else looks and runs great and the controls seem more accurate this time around.

In the end, de Blob 2 is a fun game that can be enjoyed by the whole family. There are some instances of potty humor such as burping and farting. Cartoon violence is also a given. The asking price is very reasonable and is bound to entertain for a while. Since the levels are a bit repetitive I could only bring myself to complete one section per sitting. Despite not being completely hooked, I enjoyed my time returning color to the world with my son often by my side blasting away at INKD soldiers and robots.