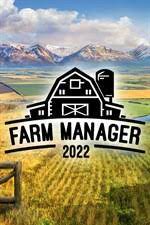 Thank you Ultimate Games for sending us a review code!

Last year we moved from a quarter of an acre of land to five acres. We've done some tilling, planting, and started raising chickens and bees on our farmette. It’s a lot of work taking care of the animals, fruits, and vegetables that we’re growing here. I must admit that I’m not eager to simulate what I’ve been spending the past couple hours of my time outside doing.

Thankfully, Farm Manager 2022 doesn’t focus on menial chores, you can hire workers for that! Instead, your main focus is developing your farm building by building and keeping your workers and animals happy and profitable. There’s a lot to this game so before diving into the campaign, scenarios, or free mode, I highly recommend completing the tutorial to familiarize yourself with the complex controls and interface.

The tutorial with teach you how to hire workers, cultivate land, build warehouses, sheds, processing plants, sell goods, and to call the fire department if any of your structures catch on fire. While you are waiting for tasks to complete or livestock to arrive, you can’t do too much. However, you can usually speed up the game to make it less daunting.

Strong Points: Build the farm of your dreams with infinite money!
Weak Points: Controls are better suited for a mouse and keyboard; clunky interface that locks up
Moral Warnings: Your buildings can catch on fire

Sadly on my Twitch stream, Farm Manager 2022 glitched out while waiting to produce 345 units of cheese. I wasn’t able to access any of the game interface options or adjust the game speed. The only buttons on my controller that did anything were the share button and the menu button which lets me resume, load (I had no autosaves), or exit the game. It seemed like the game was locked up but time slowly progressed and there were weather pattern changes. For a product that can take more than a month to produce the game can take hours in this near locked up state. For grins, I let the game run while I did other things, but the objective never completed.

With a buggy tutorial, I wasn’t expecting the other modes to run well, but thankfully they did. In Free mode, you can adjust the costs of wages and products. The yield and animal production values can be customized as well. You can disable fire, electricity, and accidents if you desire. Lastly, you can set your starting budget. I wish I had a starting budget of 2 million!

When setting up your farm, you’ll need to make sure that you have storage garages and/or parking lots for your farming equipment. You’ll also need to hire workers and keep them happy with competitive wages or else they’ll walk out on you. Having a warehouse for products and silos for grain storage is a good idea too. Electricity is also a must for all of your facilities. If you want to raise livestock, housing and feed will be required. Without food on hand, they’ll starve to death.

The campaign mode will guide and reward you for renovating abandoned farming building equipment and making the farm profitable again. It will tell you what to do, but not how to do it. It assumes that you have already completed the (buggy) tutorial. No matter which mode you play, you’ll have no shortage of things to micromanage in this game. Thankfully the workers will take care of the grunt work if they’re paid well and qualified for the task. If they’re not specialized, you can train them accordingly. The food market fluctuates so you’ll have to determine when it’s best to plant and sell various products. You can choose to run an organic farm too.

Visually Farm Manager 2022 looks decent. The graphics aren’t mind-blowing, but they get the job done. I like how the employees have profile pictures, but many of them are recycled and it’s hard to tell them apart from multiple doppelgangers. Another nitpick is the interface which is clunky on a gamepad and takes some getting used to.

The background music is calming and pleasant to listen to. The sound effects are realistic sounding and believable. While there is a narrator, she isn’t voiced.

There’s little to complain about morally. Fires can happen and animals can be injured if the fire department is not called in a timely fashion. I accidentally starved my cows to death when I didn’t have the proper storage facility for their feed.

While the gamepad controls are functional, they’re not ideal. Farm Manager 2022 was clearly intended to be played with a keyboard and a mouse.

All in all, Farm Manager 2022 is a disappointing port of a highly regarded PC game. The interface is a bit clunky to navigate with a gamepad. The PC version has bug fixes while the console version remains glitchy. According to this Steam thread, Farm Manager 2022 is unplayable for other users too. At this point in time I recommend playing the PC version or waiting for this game to be patched on consoles.