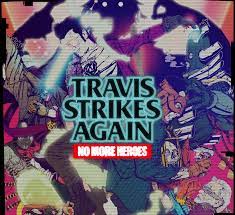 Thank You XSEED/Marvelous for providing us with a review code!

Travis Touchdown has been through quite a lot ten years ago. From the beginning of No More Heroes 1 to the present, he went from a deadbeat dorky otaku to #1 of the United Assassins Association, twice. Now in Travis Strikes Again: No More Heroes, he’s a husband, and a father—forced to seclude himself in a trailer to protect his family from the actions and consequences of his past. Just because he’s done with the assassin's life, doesn’t mean that people will cease wanting him dead.

Yet again, Travis’ past comes to haunt him. What was simply another kill to him to reach his end goal, was someone else’s daughter. Their pride and joy. Badman, father of Bad Girl (she was former #2 of the UAA in NMH1) is on a quest not only to kill Travis, but to retrieve the seven Death Balls to grant a wish. I wonder what this sounds similar to? It’s pretty obvious to know what Badman will wish for. As Travis and Badman fight, the Death Ball in Badman’s possession activates Travis’ console, the Death Drive MK11. This mysterious and supernatural console sucks them into the world of video games where Travis and Badman now must work together to collect the six other Death Balls and beat each video game world associated with it to make said wish. Each video game world has an intro segment, giving you insight into the main character of said game, as well as the boss you have to fight.

Compared to the previous two entries, the premise sounds extremely goofy and ridiculous. It is, and Travis Strikes Again is completely aware of this as it is the most meta-humor and fourth-wall-breaking adventure yet. Not only is this adventure showcasing the growth of Travis, but it’s also a retrospective of Suda51 himself. How he became a video game director, the games and people who influenced him in his journey, and even some of the regrets and frustrations he has. This also leads to quite possibly Travis’ most thought-provoking characterization yet. As Travis is an avid gamer, it explores what these video games mean to him and how they influenced him. He even has trouble fighting some of these characters as many of them he considered heroes that he looked up to, despite them not being real in a sense. Travis is older and wiser now, and while he still has that cocky, arrogant attitude with the same foul mouth he always had, he shows far more sympathy towards people, especially when he finds out the backstory of the creator of said Death Ball games, Dr. Juvenile.

Travis Strikes Again takes a completely different approach to gameplay as it’s more of a top-down arcade-style beat ‘em up. The four playable characters, Travis, Badman, Shinobu, and Bad Girl (with the latter two as DLC or unlocked after the main story in Complete Edition), traverse the video game worlds striking down strange video game bug creatures (as in program not insect). There are no more high and low attacks, or wrestling moves in combat, instead opting for a light attack and heavy attack. For the first time, Travis has the ability to jump. Kept from earlier entries is the mechanic of recharging your weapon that drains with every successful attack. There are also special moves that can be used whenever a meter is filled up by attacking enemies. It can reach up to three levels, but decreases by one whenever a character sustains heavy damage. Now while controls are responsive, I found them to be too responsive as Travis Strikes Again has this strange input buffer with its commands. My fingers end up being too quick for the action, so I end up doing a lot of unnecessary actions because the game essentially prepares them for me. This wasn’t something present in the past games, so it took me a long time to get used to. 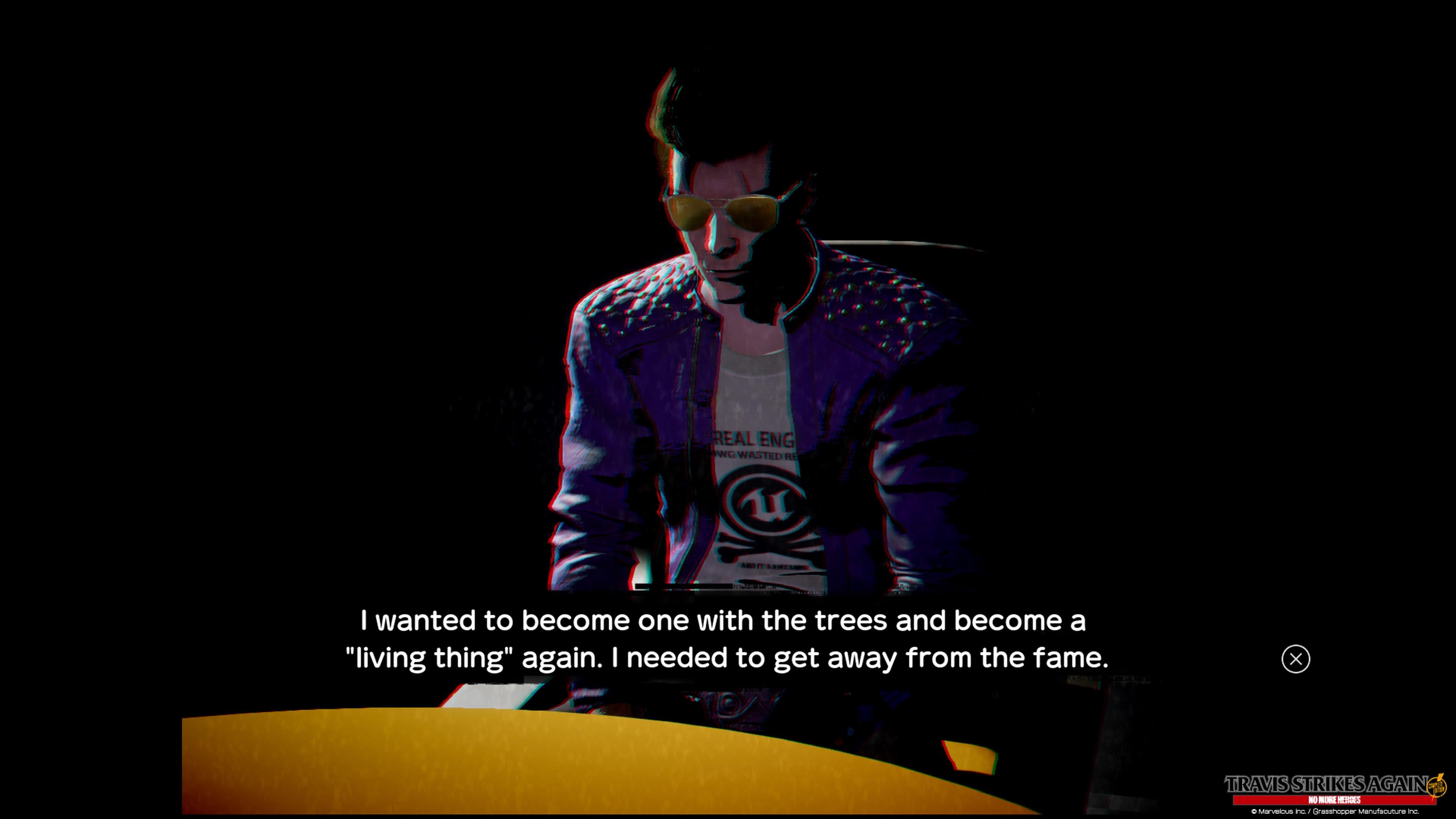 Strong Points: The best characterization of Travis Touchdown yet
Weak Points: Some levels can drag on for quite a while
Moral Warnings: Every swear in the book once again; violence against digital creatures; few instances of blood and bloodstained scenery; Travis and Badman begin each stage partially naked; Shinobu and Bad Girl are still provocatively dressed; The Death Drive MKII console is supernatural in nature; a drug reference with “Martian Mist Coffee”; alcohol present with Badman and Bad Girl

The most notable combat mechanic is the Death Glove abilities. Throughout the game, whether found tucked away in corners or by defeating bosses, there are chips that can be inserted into the Death Glove the characters wear. Up to four chips can be equipped, and equipped chips are not shared between characters, so each character can equip up to eight unique chips in total. A lot of these abilities have very strong effects such as a slowing field, a long-range grapple in which you can throw the enemy into others, or becoming a spinning blade (or bat) of death.

Combat is rather simple on the surface, the enemy variety and the multitude of Death Glove abilities add a bit of depth to it so it isn’t just a mindless button masher. Funny enough, Travis Strikes Again contains more enemy variety within its first level alone than the previous two NMH games had combined. There are small differences between the four characters too. They share many of the same moves, but have exclusive Death Glove abilities and slightly different stats.While Travis and Shinobu focus more on offense, Badman and Bad Girl have more health. Inside the levels when you aren’t swatting away bugs, most levels contain a gimmick such as hitting cards to make the terrain spin around or platforming segments where you bounce on doughnuts. While the gimmicks do give a break from the combat, some levels can go on for way longer than needed. There’s a good chance that each level will take on average an hour and a half to complete. The longest levels will eventually exhaust its gimmick which means repeating the same actions over and over until you reach the boss.

After each video game world are text segments titled “Travis Strikes Back”, an adventure-style mode where Travis and his cat Jeane go on adventures to retrieve the other Death Balls. These segments are also when characters from Suda51’s past works, such as Killer is Dead and The 25th Ward makes an appearance, confirming that No More Heroes and these games all take place in the same universe. The text-heavy segments may not be everyone’s cup of tea, and especially not something they would expect from No More Heroes, but they still contain the same tone and provide more insight into Travis’ character. A lot of them are good, even if they lean heavily into the meta-humor and commentary. Much later, Badman also gets his own text segments called “Badman Strikes Back” taking a more serious approach.

Each video game world has its own distinct style with the first world taking a more neon cyberpunk approach with a bit of influence from arcade games and the tokusatsu genre (Japanese for "special effects", notably Godzilla and Power Rangers/Super Sentai). The music is great and fits each world, with the first world using a lot of electronic and techno beats. And of course, there are remixes of No More Heroes’ main theme. The times that it is used hit even harder than in NMH2. Sadly, voice acting is very limited due to the more constrained budget. I did get used to it quickly so it isn’t a massive loss. 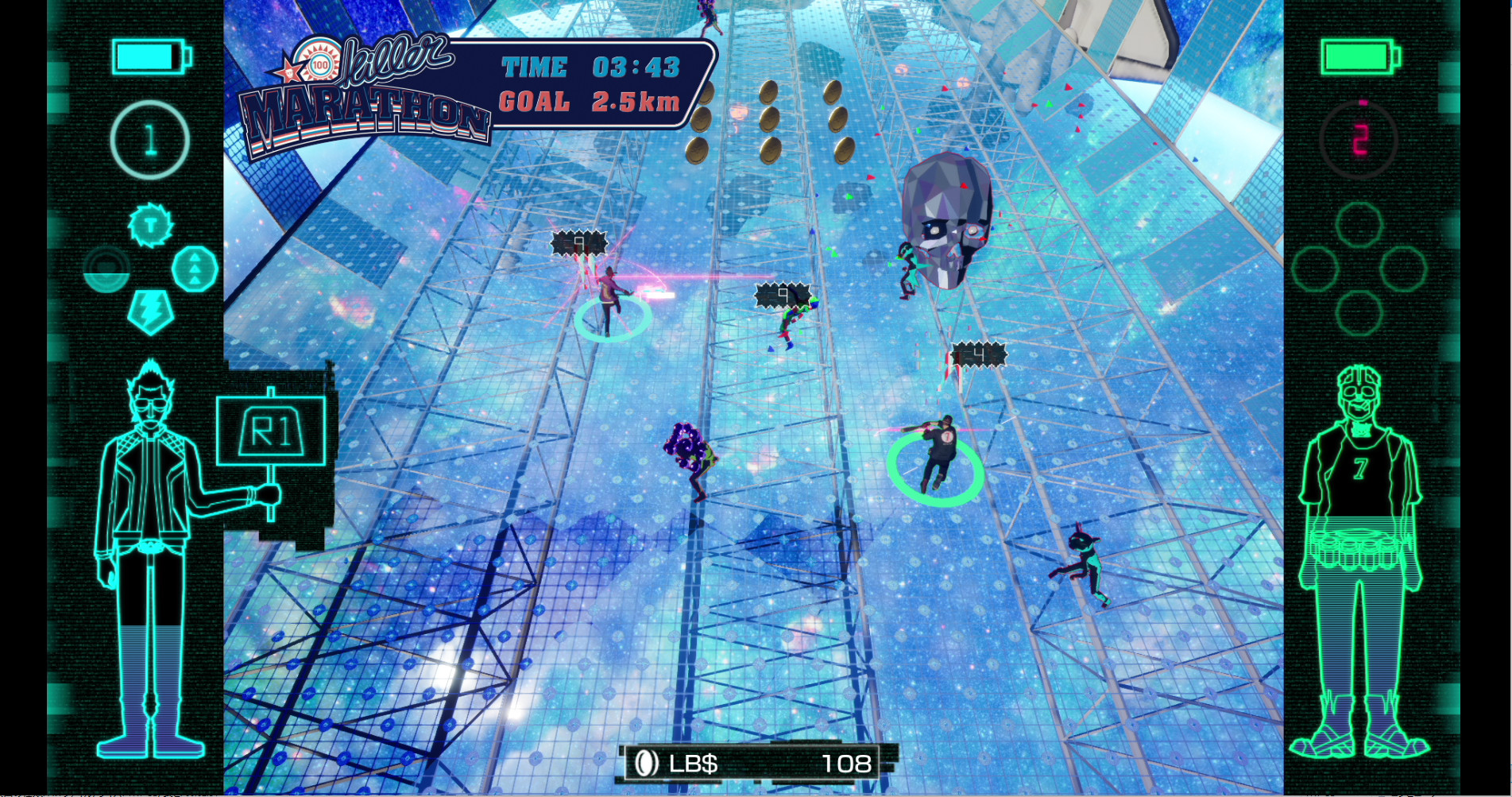 It might be a bit of a surprise, but Travis Strikes Again’s moral concerns are somewhat less than its predecessors. While every swear in the book is still seen in dialogue, violence is considerably less. All the enemies Travis fights are fictional bug creatures who burst into polygons, but blood can be seen in cutscenes and some environments. Specifically, the blood seen in the game are from a few Travis/Badman Strikes Back segments, and the main theme of the second Death Ball level has to do with a psychopath going on a murder spree. In his intro segment, he can be seen slitting the throat of a victim, and his levels contain rooms that are stained to the wall with blood. Regarding sexual content, Travis and Badman spawn in each game partially naked—it being a Terminator reference, while Shinobu and Bad Girl are still as provocatively dressed as usual. (Shinobu and Bad Girl spawn in each game with their clothes fully intact.) In some segments, a fortune teller can be seen. One Death Ball world is also heavily based on one of his previous works, Shadows of the Damned, taking place in the underworld. It's arguably the segment where Suda51's rawest feelings come out, expressing his love and contempt for the whole development process. There is one drug reference towards the end of the game where Travis smokes what is called “Martian Mist Coffee” of what seems to be a hookah. Alcohol is also present with it being a prominent part of Badman and Bad Girl’s character. Some of their exclusive abilities are based on the consumption of alcohol.

It may have been presented in a way that not many people asked for, but Travis Strikes Again is very much a No More Heroes game. The symbolism and themes are presented far better than NMH2 and might even be better than NMH1. I get that the gameplay was something most fans weren’t expecting, but some of them even call it awful. The main draw of the No More Heroes series was always the characters and how they interacted in their world, and Travis Strikes Again is a return to form with the deep characterization of Travis Touchdown and the highly memorable boss characters. While you can play Travis Strikes Again as your first NMH entry or your first Suda51 game, a lot of the depth will fly past your head if you do so and you may just end up finding it as a completely average showing if you do so. The hardest part is arguably finding a like-minded friend to play co-op with you as this entry was meant to be experienced with a buddy at your side or using Steam’s remote play, Parsec, or PlayStation’s Share Play. Morally, it’s higher than the other games, but it’s still No More Heroes in the end. For some strange reason, the PS4 version is the cheapest one as the Steam version cost the same as the Switch version + DLC ($40).

It's such a shame that "fans" are willing to skip out on this entry because it wasn't presented in the exact way they wanted it to be. Even if Suda 51 predicted this in-game, pouring your heart out into a product and showing your vulnerabilities just for people to dump all over it still stings. I vibe with Travis Stikes Again a lot because of the themes dealing with unfinished business and learning how to carry the weight of your actions. I'm glad I decided to pick up this series. Even if many people didn't understand it, you can rest easy Mr. Suda—I completely understood what you were going for.