As No More Heroes was successful in both sales and reception, a sequel was inevitable. But the first game was meant to be a “one and done” kind of thing so some liberties had to be taken for a sequel to even make sense. Plotlines were dropped, falsehoods were turned into truths, and vice-versa. Suda51, the director and writer of the last game, also took an executive director position. A lot of these changes made No More Heroes 2: Desperate Struggle somewhat divisive within the fanbase, even if it did get higher critical reception.

Desperate Struggle is all about the cycle of revenge. Travis Touchdown’s very first kill three years ago (the first-ever trailer where Travis had a different voice actor) comes back in a way to haunt him. Despite being done with the United Assassins Association, other assassins still want his head. This leads to Skelter Helter being the very first enemy Travis faces in NMH2, as he is the brother of Helter Skelter (that same guy killed in the trailer). Even though Skelter Helter fails, he ominously tells Travis that vengeance will be his. During this battle, Bishop, Travis’ only friend and owner of Beef Head video store is assassinated by thugs of Pizza Batt. As Travis finds this out unceremoniously when Bishop’s head is thrown through the window, this begins his ascent up the UAA ranks to hunt down Jasper Batt Jr., the man responsible for Bishop’s death, as well as the number one ranked assassin. This time, Travis must climb from the bottom of the 51st rank while Sylvia Christel assists him along the way. Between these moments, are also scenes that flash forward between Sylvia and "totally-not-Travis" discussing the game's events in a brothel.

Whereas NMH1 represented Travis’ actions, NMH2 explores the consequences. Unbeknownst to Travis, he became quite the celebrity of sorts, while he continued with his simple life of consuming anime, pro wrestling, and the various odd jobs to support his hobbies. Many assassins join the UAA to either fight Travis or to find out his “secret”; how he was able to walk away from it all. While many of the lower-ranked assassins are “groupies” or “posers” representing various cultures and genres of media, most of them feel rather forgettable. Narrative-wise, it does make sense as Travis at that point is purely motivated by bloodshed and revenge and sees a lot of these people as obstacles to cut down; it’s just disappointing from a player's perspective as every assassin in the first game was very memorable and also taught Travis a lesson in a way. Fortunately, the higher-ranked assassins end up being more memorable and start to have an impact on Travis as his motivations and drive slowly change.

NMH2 makes a few changes from its predecessor. The most notable change is the complete absence of a hub world, opting for a menu selection. The hub world was a common complaint of NMH1. So the entire thing was scrapped. Everything is now accessible through a list, from the odd jobs, to Dr. Naomi’s lab, to the cosmetics shop, and participating in the ranking battles. The menu streamlines the experience and lets the player get into the action quickly without excessive padding. And Santa Destroy as a hub world doesn’t need to exist anymore as Travis isn’t the loser he was previously with the dullness of Santa Destroy’s hub world representing that. 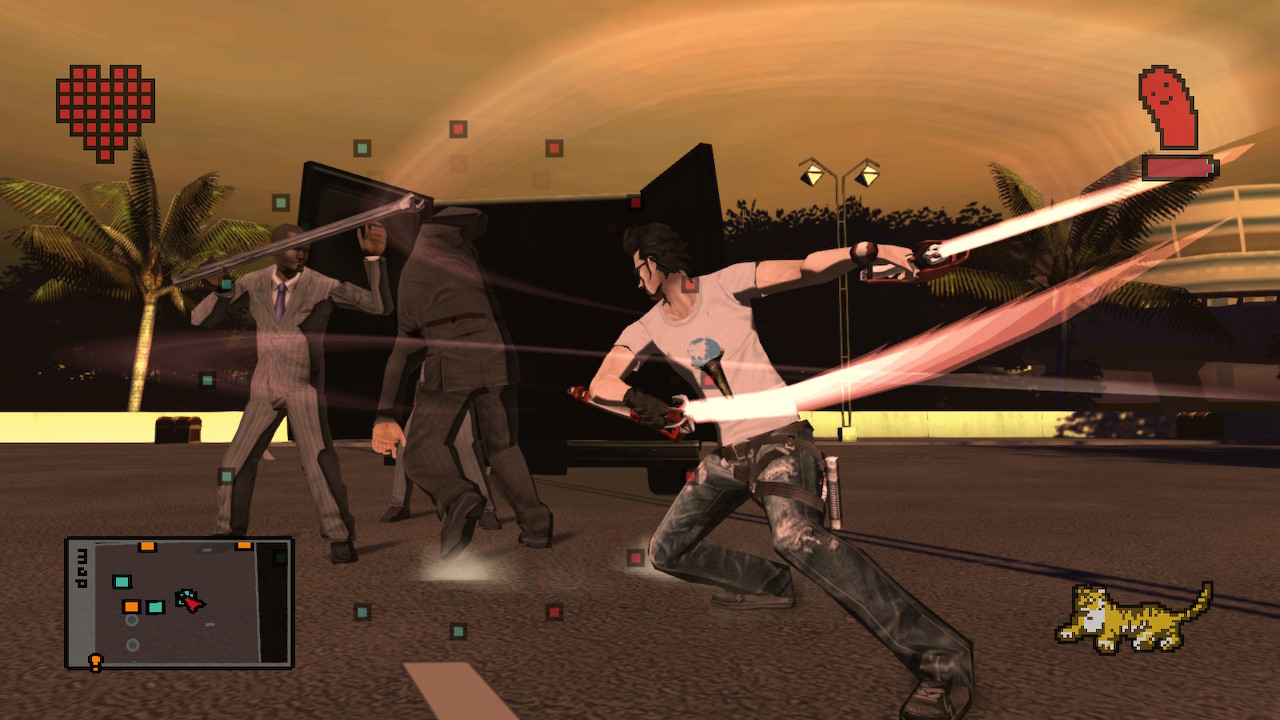 Strong Points: Selection of minigames are better overall; explores a different aspect of Travis’ character
Weak Points: Only a handful of characters are compelling; criticizes the concept of sequels, yet falls into many of the same holes
Moral Warnings: Constant swearing and God’s name used in vain; decapitations, bisecting, and blood spraying everywhere; even more blatant sexual themes, innuendos, and premarital sex; supernatural moments such as ghost assassins; plotline is about the cycle of revenge

Most of the side jobs have received a significant overhaul and are purely optional as money is now only used to upgrade stats, buy cosmetics, and buy weapons. Most of them play like classic Third and Fourth-Generation console/arcade games with accompanying 8-bit or 16-bit sprites. As most of them play very differently from each other and are all generally pretty even in terms of money generation, you can simply stick to the one you like the most to generate money instead of being forced to complete ones you don’t like. The quality of jobs even reflects Travis as they are higher in prospects such as vermin extermination, pipe laying, and space trash collection instead of the very simple ones in the first entry like filling up gas tanks for cars or mowing lawns.

Combat is mostly the same, with the Switch port retaining the motion controls of the Wii version. One major difference is that Travis has access to multiple types of beam katanas instead of the weapons replacing each other. His iconic Blood Berry is accompanied by other beam katanas such as the Peony and the Rose Nasty. The multiple types of weapons lead to my biggest complaint with the combat—with combat feeling strangely weighty. While NMH1 was fast and snappy with combat, there’s a strange sense of weight with most of the weapons, especially in regards to the Peony as that one acts as the heavy weapon of the set. The weapon closest to the feeling of NMH1 is the Rose Nasty, but even then it’s still not exact. There are fewer gimmicky moments and more focus on the action, but neither the combat, nor many of the scenarios are deep enough to warrant such a direction.

Other changes include a tiger at the bottom of the screen known as the ecstasy gauge that increases with more damage dealt and decreases when taking damage. Getting the tiger to turn red can have Travis activate his dark side mode, which grants him damage immunity, vastly increased speed, and short-ranged teleportation to distant enemies. Like in the first game, hitting the three slots with a death blow will grant Travis special temporary abilities such as a screen-clearing area-of-effect attack and transforming into a tiger, evoking fear into enemies. Controls still work just fine for either Joy-Cons or traditional gamepad, and NMH2 runs at a stable 60FPS. Some small changes made the combat feel even simpler than its predecessor and rewards more button-mashing tactics which is why I prefer NMH1's combat.

Although there are a few issues with this Switch port, such as a few scenes running at the native Wii resolution and framerate, and one pivotal scene accidentally using the wrong character mesh, making the scene unintentionally funny. The Switch port is still the best modern way to play. The PC port somehow runs even worse than the first game with more frequent crashes.

Compared to NMH1, the graphics are a very slight touchup. It has still aged well and looks nice. The music and sound effects are still solid, maybe even better, although some voice lines can get rather repetitive. The main theme is also remixed and used less frequently, but also makes it hit harder whenever it is heard. 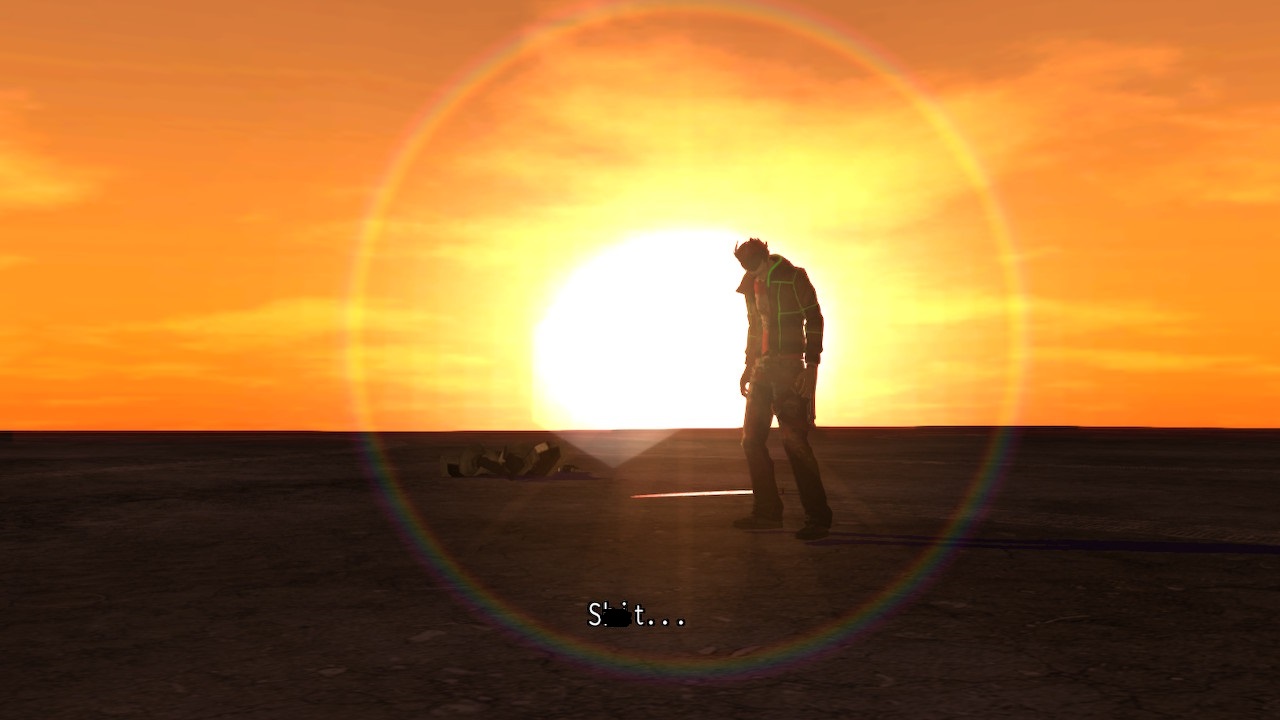 Somehow, NMH2 is worse in the moral department than the first one was. Violence is ever so slightly less, with it still being very violent in general. Blood doesn’t spray as much, but it still sprays everywhere and characters still get decapitated, bisected, and split in two. Language still has every swear in the book uttered, and with it being frequent in battle, whether it is from Travis or from the various goons he kills. God’s name is used a few times. Sexual innuendos are still present. Sexual content is even more blatant, to the point of even my annoyance. One comment that states Travis gets sexually stimulated from killing people, and this is further enforced by the ecstasy meter and a little phallic-shaped object in the top right of the heads-up display that gets happier and erected the more charged the battery on his beam katana is, and sadder the less charged it is. Sylvia is still the main target of fanservice with many scenes focusing on her breasts, butt, and crotch area, and being partially naked in one scene. In a beginning scene, Sylvia flirts with Travis to convince him to rejoin the UAA, with Travis’s beam katana also representing his state of arousal. In a later scene as Sylvia talks to the unseen Travis in a brothel, he can be seen throwing used napkins on the table in front. In a much later scene, Travis and Sylvia end up having sex before the ranked one fight and although nothing graphic is shown, you can see Sylvia covered up with a sheet in Travis’s bed before he heads off to the final battle.

There’s also a new gym trainer in town by the name of Ryan. It is safe to say he is most notably stereotypically gay, as not only is he visually based on Freddy Mercury, he also constantly flirts with Travis, calling him a hunk and blowing kisses at him. While the first entry only had occult references to satanism at best with death metal band names, NMH2 has actual supernatural elements at play. One assassin is based on a haunted manor and is outright confirmed that the venue is possessed by a malevolent spirit. Another one is more subtle later on as when an assassin is finally at peace, after the camera turns back to him, he is mysteriously absent from his suit. While Travis’s main goal does become somewhat nobler towards the end, he is still primarily motivated by revenge and consciously chose to join the bloodsport once again.

I have my fair share of disappointment with No More Heroes 2: Desperate Struggle coming immediately after playing the first one. While I do feel that NMH2 is not as good as NHM1 due to not having as strong of a cast of characters and a weaker narrative, slight changes to the combat, and some repetitive moments (with a pretty obnoxious final boss), it is still a fine game. But it’s lacking that spice that NMH1 had to make it unique and feels more generic as a result. Morally, the sequel is even lower so if you happened to avoid No More Heroes for the multitude of concerns that were present, Desperate Struggle does nothing to rectify that. Even so, Travis himself is still as interesting as ever despite Suda51 not being at the helm.