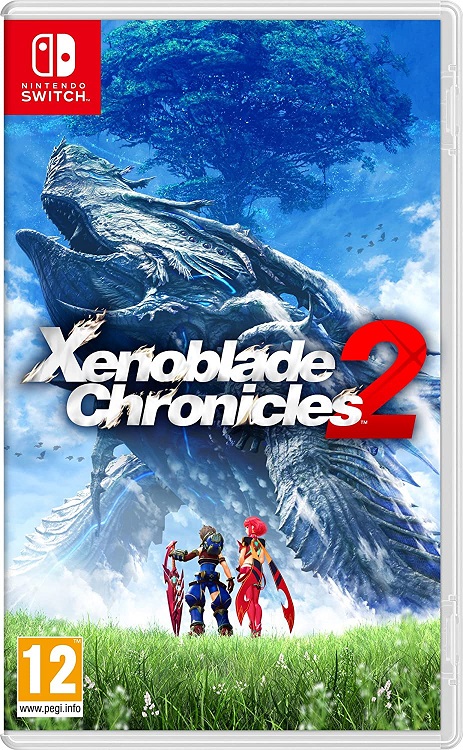 In 2020, I played a remake of a game called Xenoblade Chronicles. It’s a real-time JRPG with fun combat, well-written characters, and a great story full of twists and turns. It’s so great, in fact, that I decided to join a little ministry you may have heard of, called Christ Centered Gamer, so I could review it. I soon after played the sequel, Xenoblade Chronicles 2, and with a third mainline entry having just released, I decided to review the second game.

Xenoblade Chronicles 2, much like its predecessor, is a real-time JRPG with a heavy focus on story. Xenoblade 2 is set in the world of Alrest, an ocean formed of clouds. Humans and Blades (immortal beings formed by humans resonating with Core Crystals) live on giant Titans. These Titans are beginning to die out, meaning there will soon be nowhere for the people of Alrest to live. The only hope for Alrest is the fabled Elysium, a supposed eternal land located at the top of the World Tree. The protagonist, Rex, resonates with a Blade named Pyra, who asks him to bring her to Elysium. However, as more of the world learns of Pyra, countries and criminals alike seem to want her for themselves.

Now is a good time to mention that I will frequently compare Xenoblade Chronicles 2 to the first game, which I reviewed a remake of. The serious story was easily the best part of the first Xenoblade. This time around, the story is far more lighthearted than the first game, and it doesn’t take itself as seriously. Because of this, I didn’t care for much of the first half of the story, but once the story did hook me, I couldn’t stop playing!

The combat resembles Xenoblade 1, but with drastic changes. You control one character, called a Driver, and the AI controls two others. When you engage an enemy, you start attacking it automatically, slowly draining its health. As you hit the enemy, three Arts fill up to use. Some Arts are powerful attacks, some are healing spells, and some can be used in conjunction with other Arts in powerful combos. Each Driver can engage up to three Blades in battle, with each one determining the weapon, Arts, and element the Driver uses. Switching Blades is integral to combat, as it allows you to switch to a fresh set of Arts after you’ve exhausted the Arts of another Blade or switch to a different set of Arts to better fight an enemy.

As you use Arts, your Special Meter fills up to four times. Once it fills up to Level 1 or higher, you can use a powerful Special. Doing so brings up a list of elements. Performing two more Specials while using Blades of specific elements causes a lot of damage and attaches an orb of the last element to the enemy. When another meter, called the Party Gauge, fills, you can perform a Chain Attack, allowing you to perform one Special for each Driver. During Chain Attacks, you can destroy the elemental orbs attached to the enemy, extending the length of the Chain Attack.

If the combat system sounds very complicated, I don’t blame you. The combat system is a lot more intimidating than Xenoblade 1’s combat. (It took me until over halfway through the game to truly understand its mechanics!) The tutorials do a terrible job at explaining mechanics, and you can’t revisit most of them. (The only tutorials you can revisit are three guides on basic controls that are assigned to the D-Pad, which could have had a much better use.) That said, once you do get a handle on the combat, it is very enjoyable, though I personally prefer the simpler mechanics of the first Xenoblade. 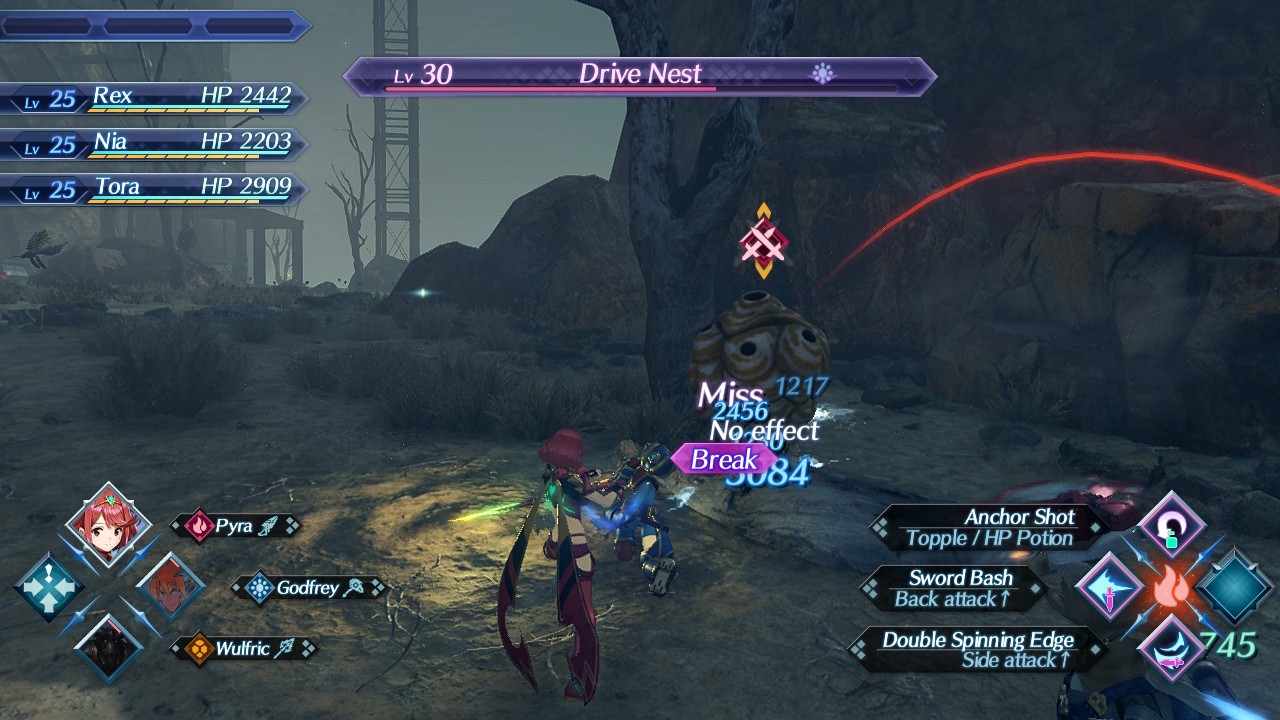 While not progressing the 60+ hour story, you’ll come across sidequests, optional bosses, and secrets. Blades can be used in the field. Each Blade has up to three Field Skills, which are needed to access secrets and sometimes important areas for the story. When you find an area that requires Field Skills to progress, you need to equip Blades with matching Field Skills. For example, if a blockade requires Level 3 Fire Mastery and Level 2 Superstrength, you need to equip up to three Blades with Level 1 Fire Mastery and two Blades with Level 1 Superstrength. This doesn’t sound too bad, but swapping out all your Blades in the slow menu system, activating the Field Skill, and then swapping them back every time you come across a blockade is very tedious.

Another major problem is the method of obtaining Blades. Almost all Blades are obtained through a gacha mechanic, where Core Crystals found in the map or dropped by enemies are consumed to obtain a Blade. Most of the time, you only pull a generic Blade, and sometimes only after 100+ Core Crystals will you pull a Rare Blade. While other games like Pokémon don’t expect you to obtain every collectible creature, Xenoblade 2 locks many sidequests behind these super rare Blades.

Unlike the realistic art styles of Xenoblade X and the original version of Xenoblade 1, Xenoblade Chronicles 2 goes for a cell-shaded anime art style. The characters are generally a little too cutesy for my tastes, but it fits with the more silly nature of this entry. Unfortunately, when you fast-travel to an area, the surroundings appear in an ugly low-poly mode for a few seconds. Also, when playing in Handheld mode, everything looks much more pixelated than other Switch games.

The music of Xenoblade 2 is absolutely stunning. It uses a mix of orchestrated instruments, choirs, and sometimes even vocals. The soundtrack is not only just as good as the first game’s (if not better), but is one of the best soundtracks I’ve heard in a game. I wish I could say the same about the voice acting. The English dub is awful. While some of the voice actors are decently talented, they were never given proper context for the lines they were voicing. For example, characters in action scenes often speak like they’re having a casual conversation!

If you want more content, there is a $30 Expansion Pass. The most notable additions it adds are a Challenge Mode where you fight hordes of enemies, a handful of new Blades, and a 15+ hour prequel story, titled Torna ~ The Golden Country. I think the prequel story alone justifies the cost, with the other additions making the deal sweeter. However, much of the content is heavily limited until after you beat the main story, and the prequel is best played after the main game, so I would recommend beating the main game before purchasing the Expansion Pass. 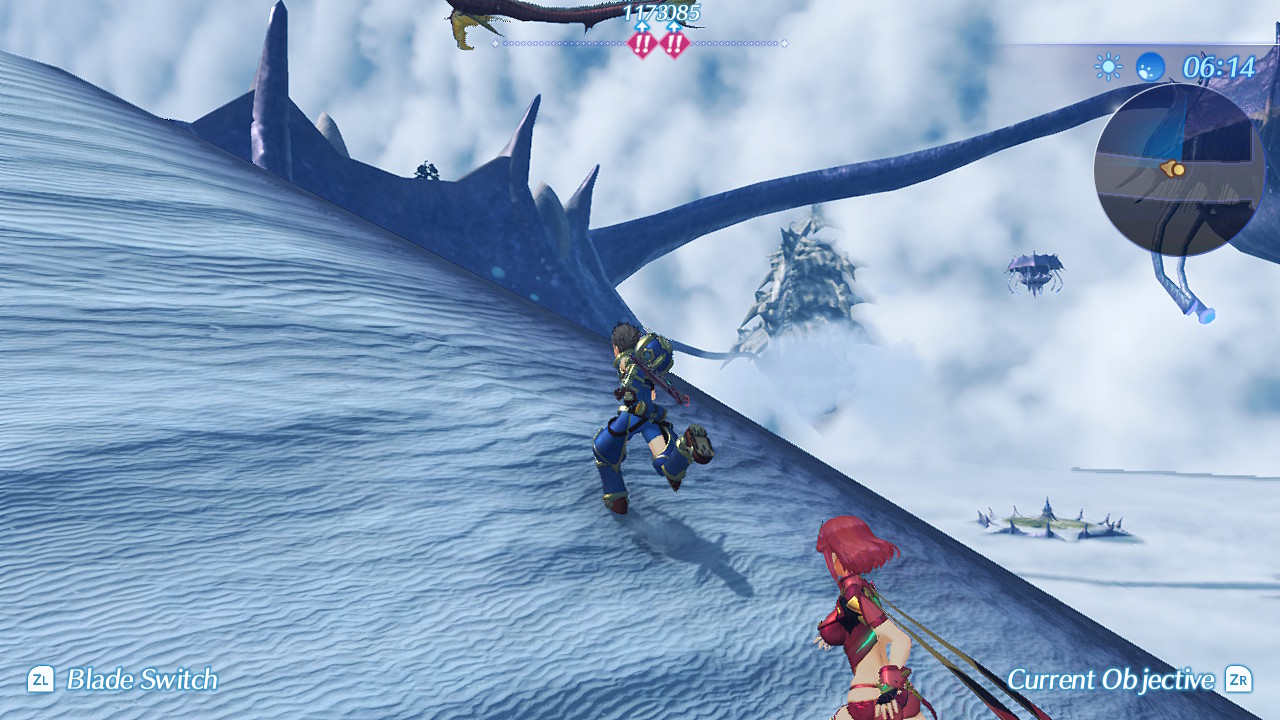 In combat, you use weapons like swords, spears, and futuristic cannons mainly to kill wild animals and monsters, but you sometimes have to kill mercenaries and soldiers in self-defense. Defeated enemies disappear after being defeated, but some areas contain animal corpses, and some cutscenes depict human corpses and skulls. Despite depictions of characters being impaled, there are very few instances of blood. In one cutscene, “blood” spews out of someone as he dies, but the blood looks like water, likely to make it less violent. The only other appearances of blood are a flashback to someone having a bloody nose and a splatter of blood on the ground in a hidden area.

There is frequent use of words like sucks, crap, h*ll, b***h, b*****d, a**, and s**t. There are plenty of sexual jokes throughout the game, including jokes about private parts and homosexuality. You’ll quickly notice how sexualized the female characters are. Most of the female characters have form-fitting attire, and many show way too much skin. There are several cutscenes in which the sexual content bothered me the most, including one that shows female characters at a nude hot spring (though steam covers any nudity), and another cutscene which shows a girl sleepwalking into a boy's bed. One Blade obtained from the gacha system, who is shown to constantly flirt with the party, has an optional cutscene where she goes on a date with her Driver, even if said Driver is female. Finally, multiple girls are shown to have a crush on Rex. After the credits, Rex is shown to be holding hands with two girls on the title screen (a third is added once you beat New Game+).

There are a few times where you become outlaws to various nations, though these cases are shown to be a misunderstanding, rather than either the party or the nations being in the wrong. There are a few cases of alcohol use, and the ESRB mentions use of tobacco, though I haven’t come across anything like that myself.

Monolith Soft is known to push messages in its games that don’t exactly line up with Christianity. This includes Xenoblade 1 using a godlike being to push a message that the world should be free from gods. Xenoblade 2 does include a godlike being (known as the Architect), but it doesn’t use it to push a negative message.

I initially thought Xenoblade Chronicles 2 was a disappointing sequel to one of the best games I ever played. By the end, however, I had a blast with the combat and story. It’s a shame that these two crucial aspects take so long to shine, and it doesn’t help that there is a slew of sexual immorality. If you extend patience with the first half of Xenoblade Chronicles 2, you will most likely enjoy it, but it’s difficult to recommend a game that takes dozens of hours to become enjoyable.