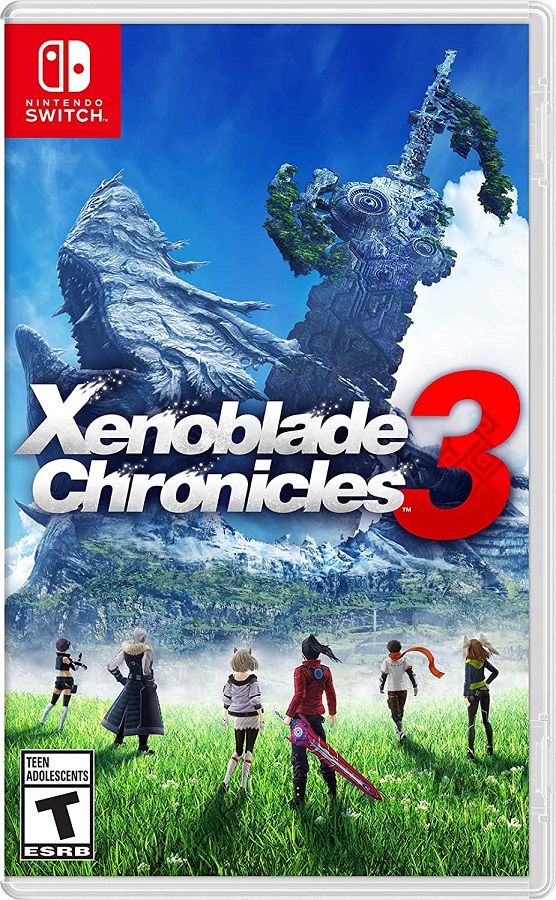 The first Xenoblade Chronicles game released in 2010 for the Wii in Japan. It was a niche game, expected to never release elsewhere. Of course, those plans changed, and after releasing in other countries, Xenoblade Chronicles would receive several sequels and re-releases. I became a huge fan of the series two years ago and made sure to review the first and second games. Now that a third mainline game has released for Switch, I simply had to write a review about it too.

Xenoblade Chronicles 3 is set in Aionios, the combination of the worlds of Xenoblade 1 and Xenoblade 2. Two nations, Keves and Agnus, are locked in a perpetual war. The people of Aionios live for ten years, spent killing each other to fill up their Flame Clocks, devices that cause them to die once they run out of the life stolen from soldiers.

While on a special mission, three soldiers from Keves, Noah, Eunie, and Lanz, cross blades with three soldiers from Agnus, Mio, Taion, and Sena. During their battle, a mysterious man stops their fighting. He gives them a power called Ouroboros, which allows them to temporarily merge with each other in powerful forms and tells them that their true enemy is a group called Moebius. He finally tells them that the only way they can stop Moebius is to travel across the world to find a land called Swordmarch. Because of this, the six soldiers become fugitives of both nations as they make their way to Swordmarch while freeing other soldiers from their Flame Clocks.

Storytelling is what Xenoblade does best, so combined with the dark setting, and being the culmination of the series, this had to be great, right? Unfortunately, while the story starts off very strong and has a great cast of main characters, it’s rarely as memorable or interesting as the first two games. There are some great moments, but aside from those, the story is much weaker than Xenoblade 1’s, and even Xenoblade 2’s. It pains me to say it, but the story is probably the weakest aspect of Xenoblade 3.

While the story does have major connections to Xenoblade 1 and 2, playing them isn’t necessary. If you wanted to play the other games, I would recommend doing so before playing this one, but if for some reason you only want to play Xenoblade 3, you can.

While the story is rather disappointing, the combat is better than ever! When you encounter an enemy, all six party members (with one being controlled by you and the others being controlled by AI) begin attacking it. When you’re within range of the enemy, you’ll perform weak attacks automatically. You have access to three Arts, which can do great amounts of damage, heal the party, or provide temporary buffs, but they'll have to be recharged over time or by landing attacks, depending on your class.

Along with your six main party members, you’ll unlock numerous Heroes, who can be used as a seventh party member. Heroes cannot be directly controlled, and have very limited customization, but each one has a unique class that your main party members can use for themselves.

Classes determine a character’s weapon and Arts, along with his or her role. Attackers have Arts that either deal more damage or cause special effects when used from certain directions, Defenders cause enemies to damage them instead of weaker party members, and Healers heal and revive the party. As you perform actions dependent on your role, your Talent Art will charge, which is simply a more powerful Art. 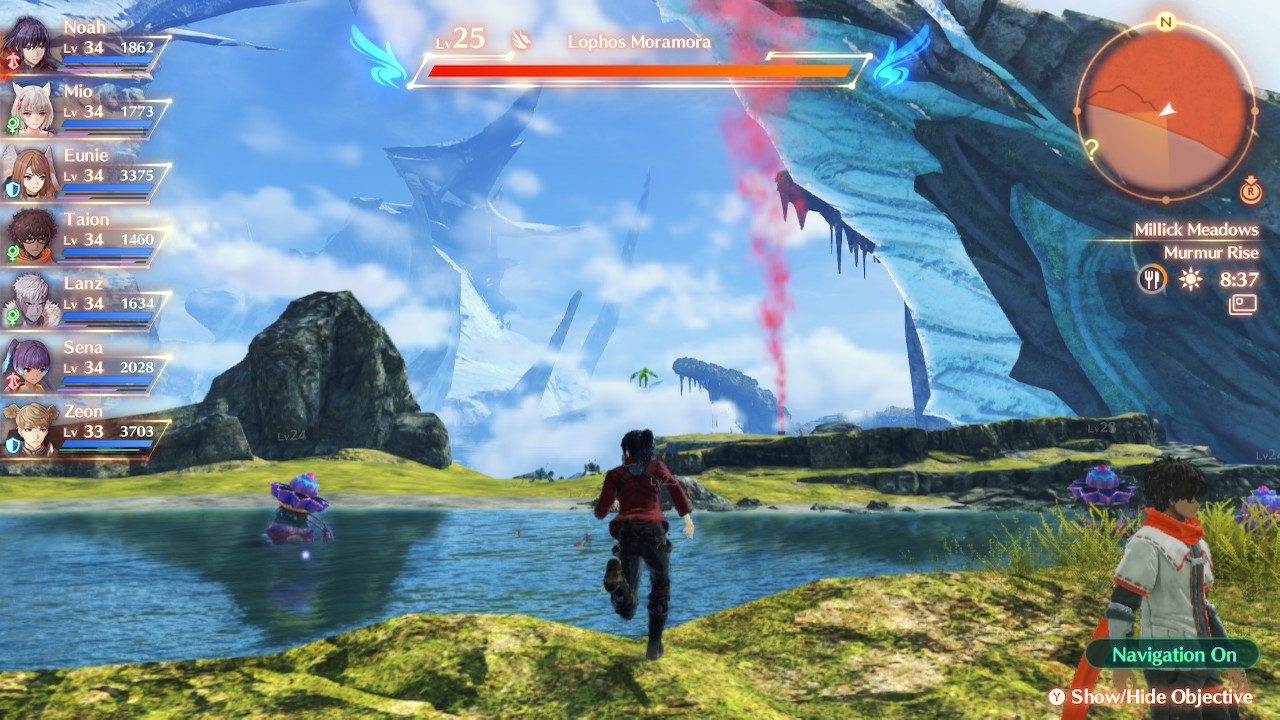 Strong Points: Fantastic real-time combat; greatly improved exploration; beautiful soundtrack that uses flutes and choirs
Weak Points: Disappointing story compared to previous games
Moral Warnings: Frequent violence involving killing others in self-defense; depictions of blood and suicide; gore in the form of dead corpses around the world and one scene depicting severed heads; uses of words like crap, sucks, h*ll, b***h, b*****d, a**, and s**t, along with made-up curse words; active rebellion; scene showing characters in a nude spa (though with the nudity covered up); reference to polygamy; several references to false religions; use of talismans; several attacks and enemies with ‘demon’ in the name

Using a variety of classes is important, as doing so unlocks some of their Arts to use with other classes. Equipping these Arts on other classes allows you to perform combos and heal allies when you otherwise wouldn't be able to. Arts learned from other classes can be paired with your class’s regular Arts in Fusion Arts, which applies the effects of both Arts at once.

At any point in a battle, you can press a button to use an Ouroboros form. These forms involve merging pairs of characters (specifically Noah and Mio, Eunie and Taion, and Lanz and Sena) into one form. In this state, which lasts for a limited time, you can do incredible amounts of damage. You are also invincible, making it a useful option for when you are low on health.

Finally, a meter fills up during the course of a battle. Once filled, you can perform a Chain Attack, which is completely revamped. First, you pick a party member who will finish the chain. Next, you perform Arts from any character. Doing so adds points to another meter. Reaching 100 points finishes the chain with a powerful attack from the party member you selected earlier. Chains can be repeated several times, but characters used in one chain are not always available in the next, so your options become more limited throughout the Chain Attack.

There are plenty of smaller changes to battles to make them feel infinitely more fluid than before. For starters, you can now switch between characters in the middle of a battle. You can also perform a dash ability to quickly position yourself around an enemy. Battles start and end without long animations of pulling out and sheathing weapons, also aiding in the faster speed of the game. These seemingly minor changes, combined with all the new mechanics, make the combat of Xenoblade 3 to be the best in the series.

The world design and exploration have improved just as much as the combat. Gone are the tedious Field Skills, which required you to constantly change your party to progress. Instead, certain abilities, like wall-climbing, are permanently unlocked by completing quests. While not truly open-world, the map allows for much more freedom than before, with plenty of hidden areas and towns. Side quests are greatly improved, with them having more interesting stories than before, along with some unlocking new Heroes.

There are plenty of great quality-of-life features, but one that I want to focus on is the new Shortcut Menu system. When outside of combat, you can hold ZL and press A, B, X, or Y to quickly jump to various menu screens, which you can assign to each button. This feature is really useful, but being able to assign menus to the D-Pad, which goes unused outside of combat, would have been greatly appreciated, since four buttons aren't enough.

While Xenoblade 3 is much more polished than the previous games, it is worth noting that it did crash on me once for an unknown reason. I didn't experience any other glitches, at least.

Xenoblade 3’s art style is cell-shaded like Xenoblade 2, but characters generally have less cartoony designs, which fits the serious tone of this entry. I personally think this is the best look the series has had, but there are some technical issues with it being on the Switch, such as slowdown, disappearing grass, and everything looking very pixelated at times. 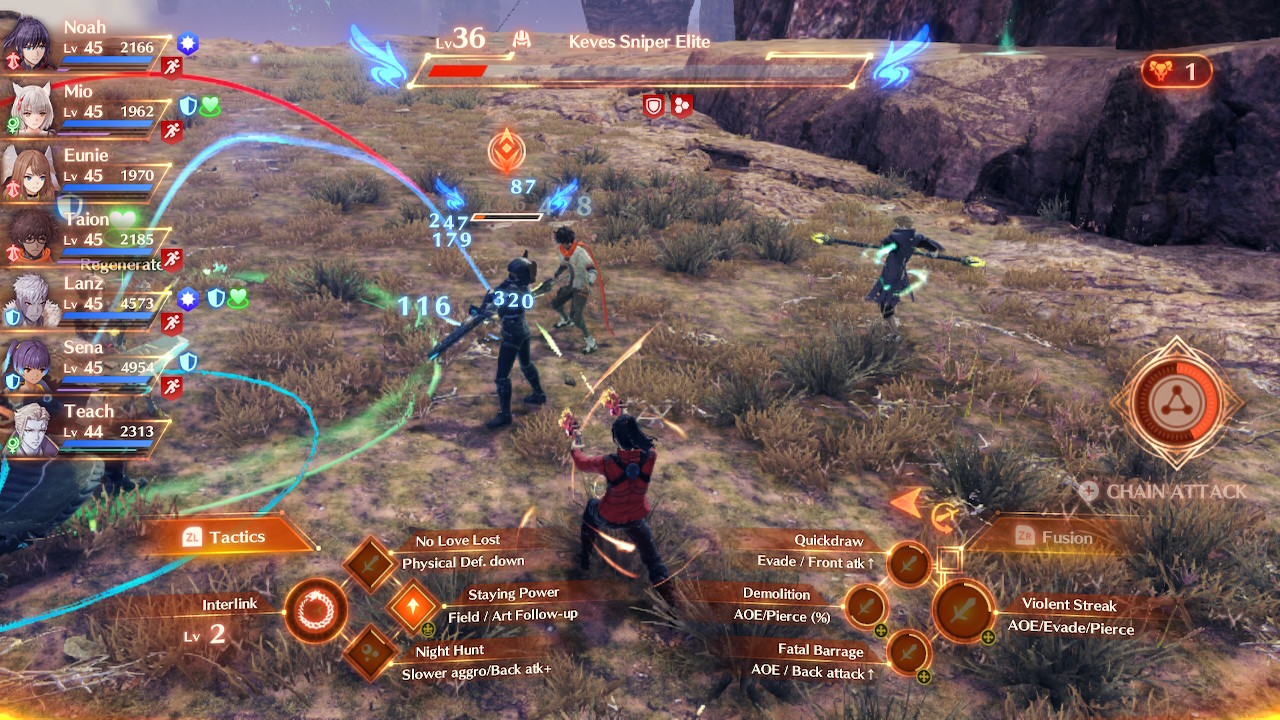 The voice acting is a huge step up from Xenoblade 2. You can immediately tell that the English localization team put a lot more effort into making sure voice clips match the context of the dialogue. The stellar soundtrack is easily the best in the series. Area themes are generally calmer than those in previous entries, but aside from a few exceptions, they are very memorable. Even better are the songs used in battles and cutscenes, which often incorporate flutes, guitars, and choirs. My only problem with the music is that performing a Chain Attack interrupts the battle themes with incredibly repetitive music, often ruining the mood in epic boss fights. A similar problem occurs when pausing the game, though it isn't nearly as annoying.

With the grim setting, you can expect a decent amount of violence. You’ll frequently kill others in self-defense with weapons like swords, guns, and hammers. While enemies disappear after defeat, there are plenty of corpses around the world, with people shown to turn into stone-like husks upon death. There are a few cutscenes depicting blood, suicide, and even decapitated heads in jars.

Words like crap, sucks, h*ll, b***h, b*****d, a**, and s**t are used very frequently, especially later on, when a character is introduced whose whole personality revolves around constant swearing. Used more frequently are made-up curse words like spark, snuff, and mudder. As mentioned earlier, the plot sees you rebelling against both nations throughout the game.

Character designs are thankfully much less revealing than in Xenoblade 2, though there is a scene depicting some of the party members in a nude spa (though steam covers any nudity). There is also a brief reference to the polygamy seen at the end of Xenoblade 2.

Xenoblade is no stranger to religious elements. Ouroboros is a reference to a symbol used by various religions to represent reincarnation (which is an important theme in the game, without getting into spoilers). There are also other occult references, such as one character using paper talismans as weapons and some enemies and Arts using ‘demon’ in their names.

All in all, Xenoblade Chronicles 3 is a great JRPG. While the story isn’t bad, it isn’t the epic culmination it was made out to be. Everything else, on the other hand, is a major improvement, such as the visuals, the music, the voice acting, and of course, the gameplay. As always with Xenoblade, there are moral issues, such as its language and religious themes. If those don’t turn you off, and if you are a JRPG fan, I would definitely recommend Xenoblade Chronicles 3.