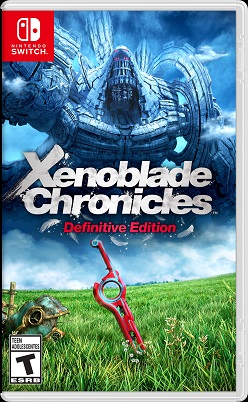 Xenoblade Chronicles is one of those games I kept hearing of, but never knew much about. I had heard stories of how it almost never released in America. I saw Nintendo re-release the game on the New Nintendo 3DS and add the main character to Super Smash Brothers, and everyone who played the game seemed to love it and always talk about it. While I wanted to try it, the ESRB rating always turned me off. After getting both an unrelated successor and a proper sequel, the original game was remade for Nintendo Switch last year as Xenoblade Chronicles: Definitive Edition. This latest release convinced me to check this grand adventure out for myself.

Xenoblade Chronicles takes place on two dead titans, called the Bionis and the Mechonis. The Bionis is inhabited by people called Homs, who are frequently attacked by the Mechon, robots that come from the Mechonis. The only weapon that can fight back against the Mechon is a sword called the Monado. This sword, however, slowly kills anyone who tries to use it. One day, Shulk, the main protagonist, ends up using the Monado out of desperation to rescue his friends. He not only finds out that he can safely use it, but starts to receive visions of the future. With these visions, Shulk can predict tragedies, such as someone getting injured, and try to prevent them from happening. With his newfound gift, Shulk sets out on a journey to save as many people as he can and wipe out the Mechon. I don’t want to give any further details, but the story is easily my favorite part of Xenoblade Chronicles. The game was always very difficult to put down as I always wanted to see what would happen next.

The story is usually serious, but there are also plenty of cute and silly interactions among the characters, making them very memorable. It helps that the voice acting is top-notch. One detail that I love is that party members often talk to each other during combat. Some might find this annoying, but there is an option to disable it.

As this is a JRPG, the player will have to fight many monsters and Mechon in real-time battles to progress. Party members perform basic attacks automatically, but they also have stronger attacks, called Arts, which are performed manually, but have to recharge after being used. Most Arts are more effective if used in specific ways, such as being used from behind the enemy. There can be up to three party members at a time, but only one is controlled by the player; the other two are controlled by AI. Battles take place in the same field as exploration, which is a nice refresher for JRPGs. 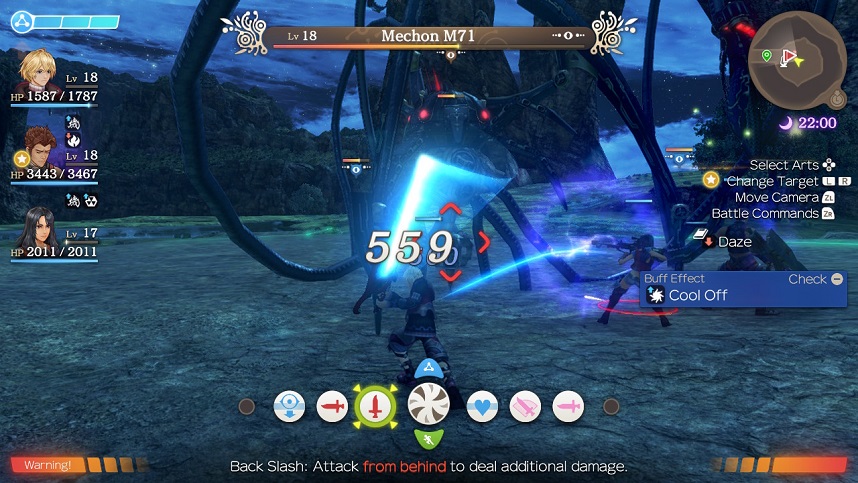 Strong Points: Unique combat; engaging story; memorable characters; excellent visuals and music
Weak Points: Cumbersome inventory management
Moral Warnings: Violence and blood; uses of words such as h*ll, d*mn, and b*****d, along with infrequent fart jokes; revealing outfits on female characters; characters implied to have been conceived outside of marriage; characters who use magic and worship their ancestors; use of rituals; enemies and items named after demons and hell; area with an occult theme; some characters with prejudices against other races; uses of drugs and alcohol; quests involving suicide and mercy killing; numerous religious themes, including rebellion against an apparent god

If a battle progresses for a long enough time, Shulk will receive a vision of an attack that the enemy will perform in the near future. The player will have to quickly form a plan to prevent the enemy from attacking. There are several methods of preventing visions from happening, but the recommended method is to use the Monado, which has powers such as being able to shield party members. If used properly, these powers can render the enemy’s attacks useless. The fast thinking involved with visions and the satisfaction of preventing them easily makes this unique mechanic my favorite part of the combat. When visions start happening in battle, they do appear very frequently, with no settings to slow them down. Some people might find this too stressful, but I always enjoyed the chaos of having to quickly strategize each of my attacks for survival.

The combat uses a unique control scheme, using the D-Pad to select Arts while simultaneously using the left stick to move. As to be expected from Nintendo games, there are no options to change the controls in-game, which will disappoint some. One nice feature I don’t see often in games is that the player can manually zoom the camera in and out.

The player will explore a large world on his quest to destroy the Mechon. This world is made up of the body parts of the Bionis, such as its foot, its leg, and its back. This is much more unique than just using the earth or some generic planet as the setting, like too many games do. The world generally follows a linear path, having occasional hidden areas. Sadly, the field isn’t too special other than the novelty of exploring a humanoid being. The gameplay really is about the combat.

Outside of battle, the player can change the equipment of party members to improve their stats. This isn’t revolutionary, but it’s worth mentioning as it involves some notable problems with the game. There are six pieces of gear to equip on each character, which seems unnecessary and feels like a drag to change. Some gear can be augmented by craftable items, but the process to craft these items takes an unnecessarily long time. Some pieces of armor normally cause female characters to wear skimpy clothing, but there are settings to avoid this.

There are plenty of sidequests which involve tasks such as defeating enemies or collecting items. Most of these are very repetitive, and only a few give worthwhile rewards. There are hundreds of quests, with the player being given many at a time. There are features to help keep track of them, but the sheer number of quests was often overwhelming. Some sidequests have serious themes too, dealing with things like drugs, alcohol, and suicide. There are a handful of quests where NPCs who are studying ruins want the player to collect items in order to replicate ancient rituals. Nearly all quests like this are optional, at least.

Xenoblade Chronicles: Definitive Edition looks and sounds great. The main characters have been remodeled and look like they’re straight out of an anime. Sadly, the animations, which haven’t been improved, look stiff in some cutscenes. The music, which garners a lot of hype, is absolutely phenomenal! Nearly every song got stuck in my head. Many songs have been rearranged from the original release, too, with settings for the player to choose the arranged or original versions. Surprisingly, the sound test mode, a feature from the New Nintendo 3DS version, wasn’t implemented in Definitive Edition. It’s not a terrible loss, but I can’t imagine why Monolith Soft would omit a feature like that from the game.

On top of looking and sounding nicer, Xenoblade Chronicles: Definitive Edition comes with some extra content and features, too. One new feature is the Event Theatre (yes, this game uses British spelling in the American release), which allows the player to re-watch cutscenes. This feature is helpful as the player can use it for a recap of recent events in the story. Another addition is an easy mode which can be used without penalty. There isn’t a conventional hard mode, but the player can manually lower party members’ levels to make the game more difficult. There is a Time Attack mode where the player fights waves of enemies to earn rare and exclusive items. It’s helpful for getting the items, but I did not find the mode very fun to play. The main new addition is the epilogue set after the main game, titled Xenoblade Chronicles: Future Connected, which serves as a way to further develop one of the characters. Unfortunately, the story is not quite as perfect as the main story, and left me with more than a few questions. The gameplay is more open than the main game, which I liked. The extra adventure isn’t amazing, but I appreciate having one at all, since most games don’t get expanded stories when they're re-released. 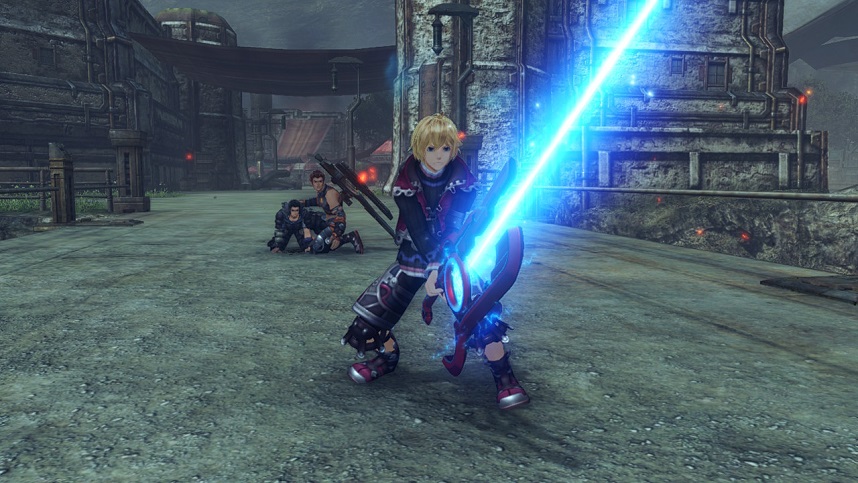 The only glitch I found was a crash that occurred when using the Event Theatre. I wouldn’t worry about this crash happening regularly, as it seemed to be caused by playing for an extended length of time.

Xenoblade has quite a few moral issues to discuss. It certainly is more mature than the average Nintendo game.

The game is violent, and shows innocent people being crushed and impaled, showing blood in violent cutscenes. While bodies disappear in gameplay, corpses are shown in cutscenes.

There is language, but it’s largely confined to the beginning, the end, and Future Connected. Words like h*ll, d*mn, and b*****d are the only words used. Nearly every curse word is in a cutscene, but there was one instance I noticed of a character using h*ll at the start of a battle. There were also two fart jokes involving kids.

As far as occult content goes, there is a lot to mention, but rarely is anything too out of the ordinary for JRPGs. There is a group of angel-like characters who worship their ancestors and use magic, and an important character who acts as a seer. Rituals are performed, sometimes by the player, but mostly by other characters. There are also infrequent enemies and items named after hell and demons. Similarly, there is an area with an occult theme, containing enemies designed to look like demons.

Xenoblade, like many Monolith Soft games, has a number of religious themes. Most are minor, such as some characters and objects, including the Monado, being named after Gnostic beliefs. However, there is one major religious theme, in that a part of the story involves rebelling against and destroying a “god.” After doing so, it is revealed that this was a false god, but before then, I was really bothered by this theme of rebellion. The world is also portrayed as being better off without any god at all.

Despite these moral problems, there are some good lessons, too. While there are characters who are shown to have prejudices against other races and characters who seek vengeance against those who have wronged them, these are shown to be wrong. The game demonstrates the need for friendship, and uses sidequests to show the importance of healthy relationships with family. There are sidequests involving drugs, alcohol, and suicide, but all of these things are portrayed as immoral.

Xenoblade Chronicles: Definitive Edition is one of the greatest games I’ve ever played, and definitely the greatest JRPG I have played. When I finished both the main story and Future Connected, I was sad that it was over. I can’t really say whether or not the game is worth double dipping, since I haven’t played the original version, but I don’t think Future Connected alone justifies a purchase. Despite being a Nintendo game, there are many moral issues, so a number of people will likely be turned off. For those who do play Xenoblade, however, this will be one of the most unforgettable stories they will ever experience.