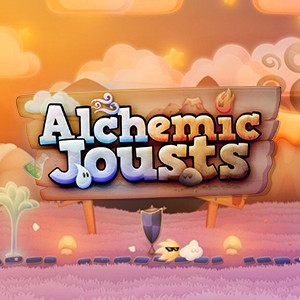 Thank you Lunatic Pixels for sending us this game to review!

In Alchemic Jousts you start off with water, fire, and earth. With these three elements you can unlock over one-hundred and eighty buffs, disguises, elementals, enchants, and passive abilities. Unfortunately, you can’t just fuse items haphazardly. Combing items requires reagents that you earn from completing campaign missions. Unsuccessful attempts still consume reagents. On a positive note the game shows you your past few combinations and will give you clues and hints for yet to be discovered unlockables.

There are thirty stages plus an additional five elite levels to work your way through. In order to advance to the next stage you have to earn at least one star from the previous one. With the exception to the challenge levels, you get to select the difficulty and number of stars you can earn. The harder the difficulty, the more stars, reagents, and experience you’ll be awarded. 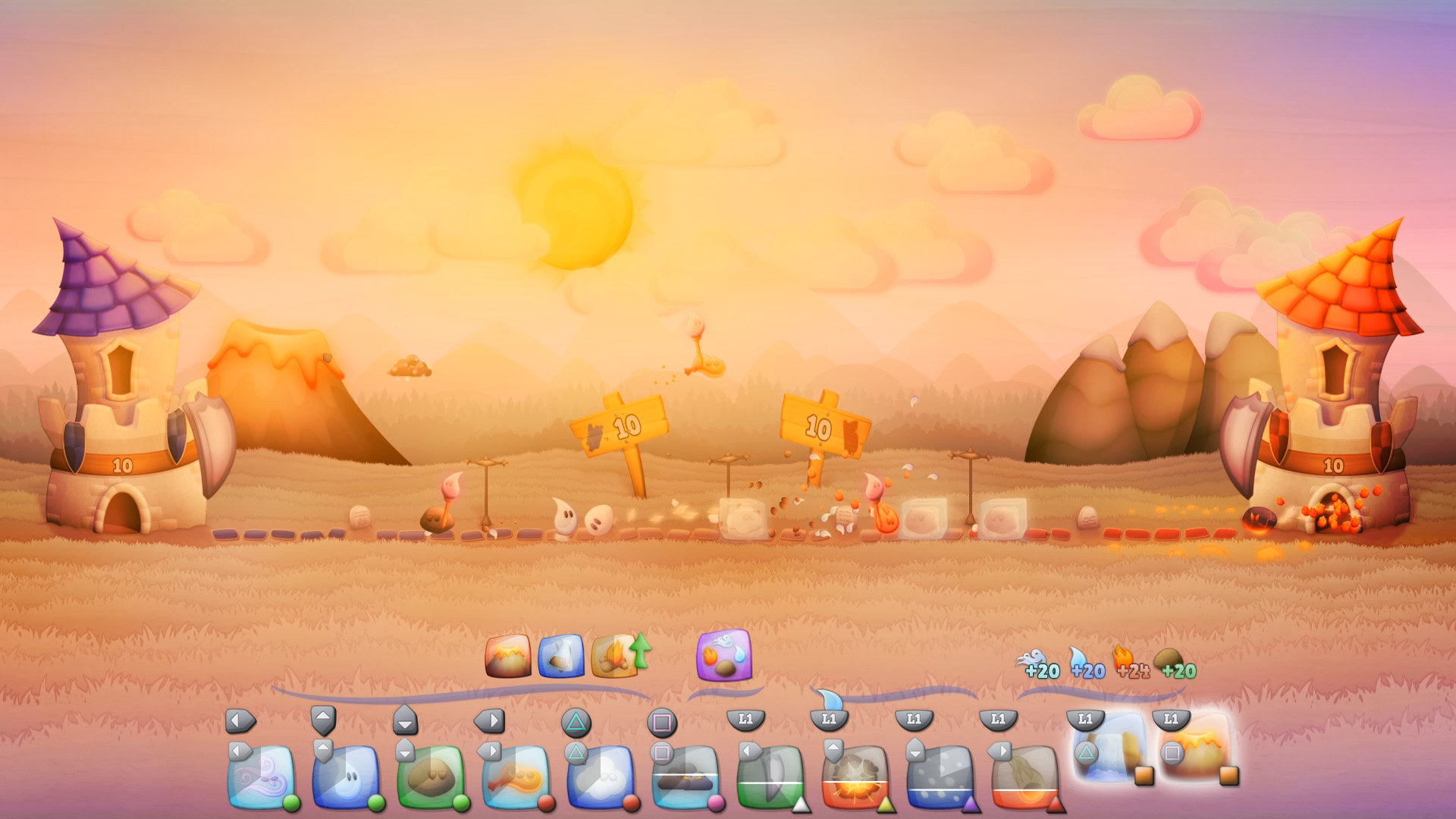 Strong Points: Charming visuals; fun concept with lots of possibilities and 182 items to unlock and use
Weak Points: Multiplayer not available right away
Moral Warnings: Alchemy use; references to evolution

The 2D graphics are very colorful and cute. Don’t let the simplicity fool you as this game has a lot of depth to it. To start, you have the basic rules of water beating fire, fire beating earth, and earth beating water. Air can also be used for aerial attacks. Things get more complicated as different tiers of elements (steam, lava, mud, sand) are used and you’ll have to remember their origin to defeat them.

The winning conditions depend on which of the five game modes you’re playing. Combat is the standard game mode where you have to defeat your opponent’s tower while defending yours. Whichever runs out of hit points first loses. As you unlock passive abilities you’ll find a couple that permanently increase your tower’s starting health points! Discovering the recipes is half of the fun and it is possible to unlock higher tier recipes as long as you figure out the components needed.

The Capture mode focuses on collecting wands and bringing them back to your tower to do damage to your opponent’s. The elements carrying the wands are slowed down significantly. Attacks made to the towers directly won’t count. The King of the Hill mode focuses on claiming territory near the towers and the side with the most claims slowly deals damage to their enemy’s stronghold. In the Attack mode your goal is to hit your opponent’s tower as many times as possible before the time runs out. Your tower won’t be impacted by enemy attacks. The final game mode is Endless where you have to survive as long as possible while the enemy steadily gets stronger. Their tower is impenetrable in this mode. Once all of the game modes have been played, multiplayer becomes available. 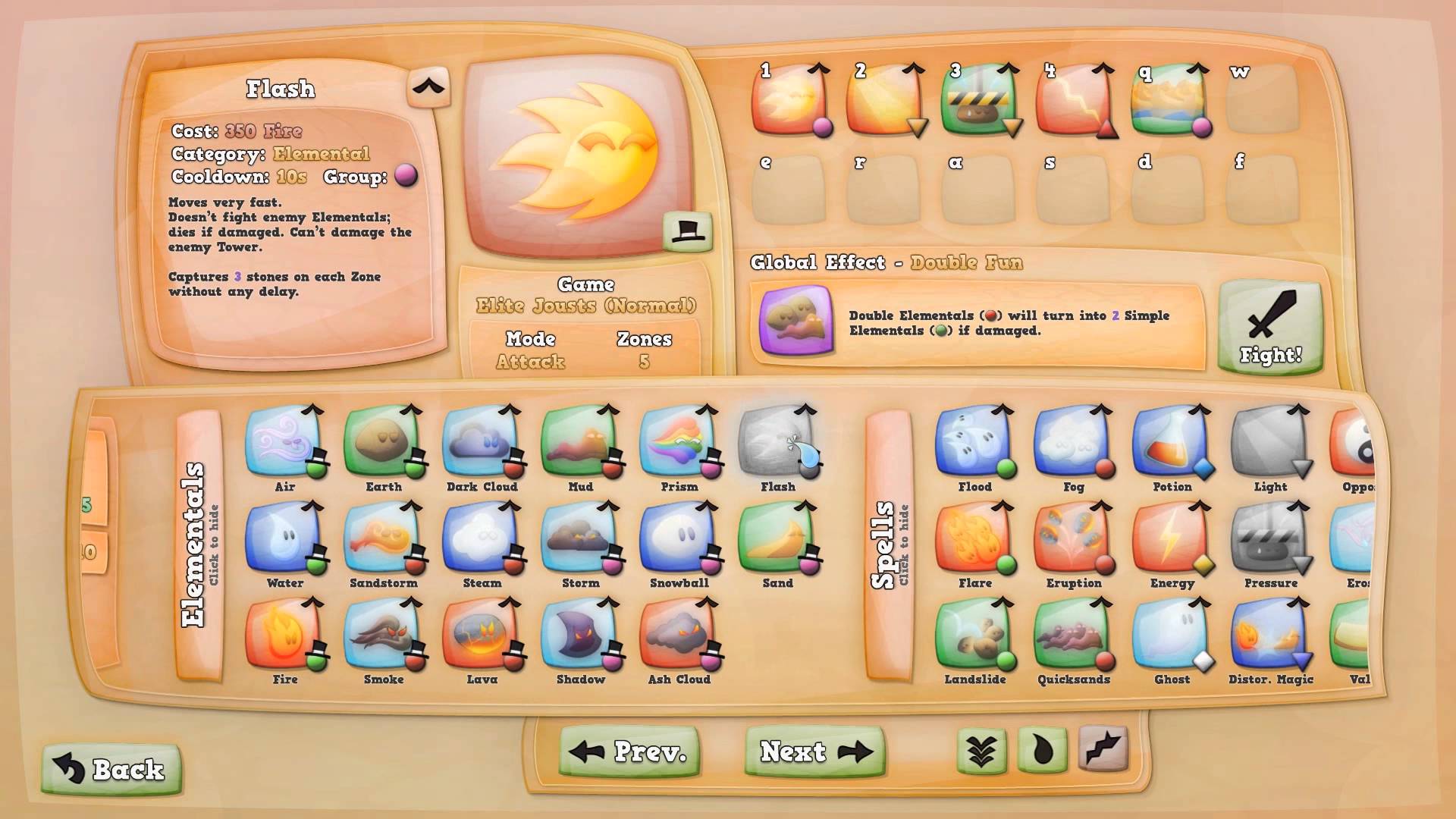 As you can see there’s a fair amount of variety in this game. Some of the levels are themed and have boosts and handicaps to add further challenge. Besides selecting your elements and boosts, you can equip last ditch defenses and elemental generating boosts. Lower tiered units become available quicker, but they are weaker. Since the slots are limited, choose your offensive and defensive items carefully. For example, King of the Hill modes won’t need wind or air units. Instead, equip faster moving ones that focus on movement over fighting.

The battles are pretty tame as conquered foes just go up in smoke. The logic behind combining items is quasi-scientific in nature and it came as no surprise that life originates from combining water and energy (the source of lightning). As the title suggests, alchemy is heavily used in this game.

If you enjoy tower defense or strategy games, Alchemic Jousts is worth looking into. The Steam version offers a free demo if you’d like to check it out before spending $15. There's plenty to do and unlock in this title and if you have friends to play against, you'll be sure to get your money's worth.