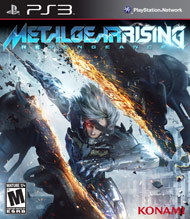 The major selling point for this game was the fact that you could slice your enemies and objects the way you'd like. With a mechanic called Blade Mode, you can move your katana in any direction you please to slice your enemies into pieces. Yes, it does sound very disgusting in concept, and I do agree mainly because of the way the enemies react. You can slice an enemy's arm off and watch them hold onto it and scream. You can also slice both of their legs off and watch them crawl towards you, not giving up the fight. For someone who might be squeamish, this type of game is definitely not for you. Though, and I'm assuming this is to keep the ESRB rating lower than Adult, the majority of enemies are cyborgs and advanced war machines.

Compared to other Metal Gear games, I've noticed that this one has a lot more cursing than the others. I'm assuming it's due to the direction being more action-paced and to blend in with other edgy hack and slash games like Devil May Cry and Bayonetta. Along with that, Raiden, as well as some female characters, are definitely designed to arouse players. You can find some secret posters in a few places that will have women posing in bikinis. There is also a scene where a security guard is looking through a pornographic manga, though you won't see any nudity in this game whatsoever.

In general, I found the game to be very satisfying and challenging. Any deaths that I have received from combat felt justified, and slicing away at deadly machines can be very enjoyable. The gameplay is your standard hack and slash game, which can be very familiar to those who are fans of that genre. One of the main things that might take some time to get used to is the block, dodge and parry system. Instead of having a dedicated button, you must input the proper button combination at the right time for it to activate. This may take some time to get used to, but once you get it down, it feels perfect. Slicing away at your enemies will make their armor shine blue, and when it does, that is the perfect time to enter Blade Mode. Slicing off certain limbs gives you extra battle points, and finding the life source that's inside each enemy will refill your health during heavy battles. You can collect repair nanopaste that is lying around, and it will heal you the moment your health reaches zero. You can also find other weapons and utilities like missile launchers and grenades, as well as boxes, oil drums and other goodies that will help you play more stealthy.

Yes, there is stealth in Metal Gear Rising, though the pace is much different compared to Metal Gear Solid. Enemies don't react to fast movement like they would in Solid, and sneaking up on an enemy and slicing away at them in Blade Mode usually doesn't alert nearby guards, regardless of how loud it really is. Augment mode is a visual enhancement that displays all enemies in red, as well as showing you any items that are lying around, and where your next destination is located. This makes stealth combat a lot easier than in past games, where you'd usually be given a simple radar instead.

At the end of each sequence, you will be given a grade and battle points depending on how well you did. Then at the end of each chapter, all of the scores get tallied up to give you a final chapter score. Battle points are then used as currency to purchase different weapons, armor and upgrades for your equipment, as well as more combat abilities to help you defeat enemies in unique ways. One of the coolest things about this is that you won't be able to upgrade everything in your first playthrough, which gives you the drive to continue playing the game after completion, as well as making your combat build more unique. Any upgrades and items that you purchase will be locked to your save file, so it all carries over to future playthroughs and VR Missions. After beating the game, you will be given a final game score that tallies up the score for each chapter, as well as unlock some new goodies and VR missions.  You can also find laptops lying around in the game that will unlock even more VR missions. VR missions are side missions that are extremely challenging, so if you're a fan of difficulty, they're perfect for you. 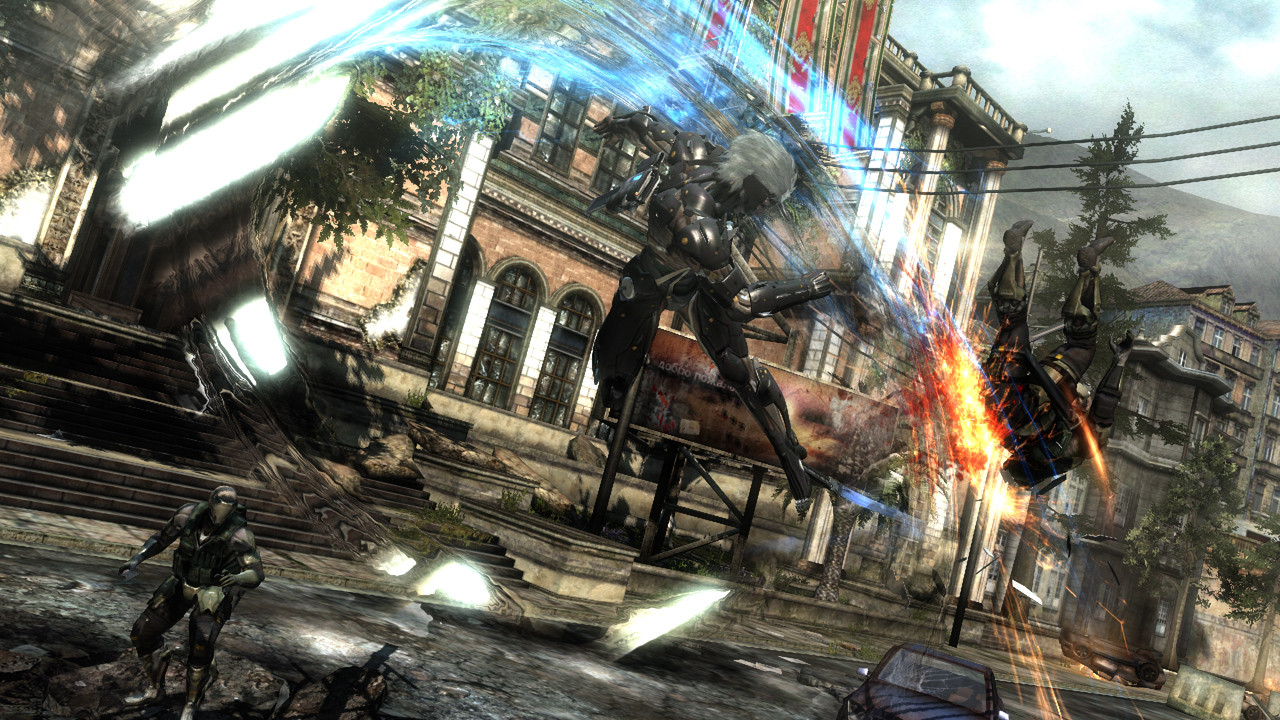 Graphically, this game isn't very beautiful, but it does look very detailed. I'm assuming it's to compensate for the deep gameplay and the depth of the slicing mechanic. Some environments look bland and colourless. That's not to say that the game isn't great to look at, but I would have hoped to have seen more variety in colours. Some of the areas do look great, and the character designs and special effects are very well detailed. Nothing feels rushed in this game, and it's not very often that you will see any recycled objects. Mouth movements during in-game cutscenes aren't very impressive, but body movements look really good. Though, in the long run, I was mildly disappointed with the visuals of the game, and it felt like it was a step down from Metal Gear Solid 4.

The soundtrack is nothing short of excellent. I would get goosebumps during boss fights because of how well the music fit. Every boss had a unique song that would amplify their personalities and make the fight feel extraordinarily epic. The majority of the music is nu-metal, and although I'm not a fan of that genre, I still enjoyed it regardless. The sound effects for slicing and shooting weapons felt like they were in the right place. Voice acting does feel very low budget at times and I really disliked listening to a certain little boy who had a Jamaican accent. Other than that, everything is really well done when it comes to the sound aspect of the game.

I really enjoyed my time playing Metal Gear Rising: Reveangance. It has the fun factor that I felt has been lacking in most modern video games. Story wise, it's actually very deep and interesting, as well as very over-the-top like in an anime. I loved the purpose and motive for Raiden to go after the main villain in the story, as well as the way Raiden grew the further you got into the game. You get a sense of progression the more you play the game, and defeating enemies that have wronged you in the past is so very satisfying.

If you can excuse the morality issues, I highly suggest for everyone to give this game a try, as well as check out the main trilogy. It's deserving to be one of the most popular franchises in video game history, and this game became an instant favourite of mine. Although it isn't very extraordinary in the graphics department and the voice acting is sub-par, the gameplay is very solid and enjoyable. The moment you pick up and play this game, expect to be blown away.