Many thanks to Far Outpost for the review materials!

Almost all of the reviews I've had the privilege of contributing to this site are video games, but once in a while we get the chance to look at something different. I was especially eager to review this role-playing game because I'm a 30+ year veteran of Dungeons & Dragons and hoped to put all that experience to good use here.

Realm of the Livingstones is a role-playing game designed to be used as a Bible study tool primarily for youth programs. The intent is to capture the imagination of young students of Scripture by using the story and game setting to reinforce Biblical principles. The roleplay is only one component of a system designed to be fun and educational.

The game is set in a fantasy setting which is divided into four "expanses." Each of these expanses features its own history, lore, geography and themes. The ultimate goal of the campaign is to gather all twelve magical gemstone keys. These keys are able to unlock the Great and Ancient Gates of THE KING. The keys can do more than this, being magical artifacts, but the details are a matter of myth and legend in the game. Most regions in the game world correspond to Biblical settings and events, though not necessarily in a one-to-one correlation. The idea is to teach principles, not replicate Biblical times. As a Dungeons Master for Dungeons & Dragons I've run games in the Forgotten Realms, Dark Sun, Dragonlance and even in the Grand Duchy of Karameikos (if you get that reference, you're probably an old grognard like me.) Even so, I've run my own custom setting for the last 19 years. I just don't usually find pre-generated fluff that compelling. That said, the Realm of the Livingstones is elegant and engaging, and I found myself enjoying the lore more than I expected.

The Game Master is in charge, and the one responsible for presenting the game world, the challenges, and assigning Scripture readings. He or she also serves as the emissary of Malcham Zidek (like Melchizedek, get it?), a mysterious and very powerful benefactor in the game. Each of the players creates an "avatar," which is the character that represents them in the game world. The avatar can be a human, or any fantasy race the player desires.

Each avatar chooses a class - or profession. Available classes are Swordwielder, Songsmith, Sojourner and Savant. Each class is further divided into subclasses for greater specificity. That's it for character creation. There are no rules governing character attributes, skills, special abilities or defensive advantages. Avatars are armed of course, but not necessarily in the martial weapon sense. A "weapon" can consist of a harp carried by a Bard (a subclass of Songsmith) which can be used to pacify an opponent in combat. If you're familiar with the old Dungeons & Dragons cartoon show, you get the idea. Each of those characters carried a "weapon" but that could mean anything from an invisibility cloak to a shield.

In terms of fluff (story and setting) vs. crunch (game mechanics and rules), this game is 99% fluff and 1% crunch. (Meaning the rules structure is so minimal as to be almost non-existent.) Avatars do gain experience (XP) points for good role-playing, success in and out of combat, solving puzzles and demonstrating an understanding of the lessons being taught. There is no level cap, and the XP table is linear, with the avatar gaining a level for every 100XP earned. Avatar levels do not translate into any direct in-game crunch, though the Game Master may offer rewards in real life, such as treats or badges. In-game rewards can include increased gaming power, although the exact form it takes is based entirely on the Game Master. This is an area where the lack of a fixed rules-based leveling system is really felt. The Game Master needs to be very careful to make such rewards fair and consistent.

Players can also earn Manna through outstanding performance during the quests or Scripture study, which can be spent for real-life rewards like pizza, stickers or even toys (like a Nerf gun). 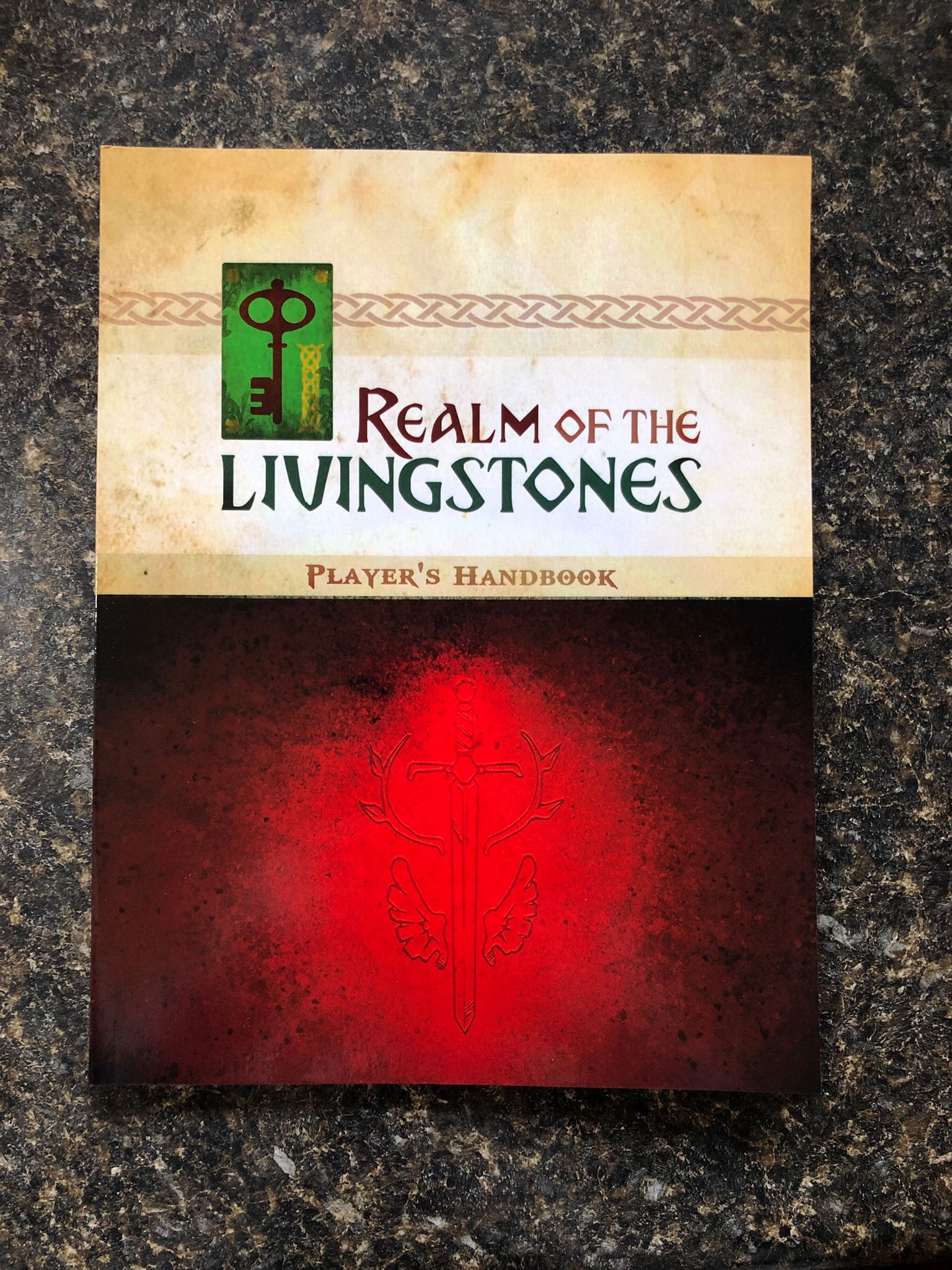 Strong Points: A well defined setting with clever ways of presenting Biblical principles
Weak Points: Very little in the way of actual game rules or structure, some elements seem unnecessary
Moral Warnings: Some of the illustrations in the rulebooks can be a bit immodest

Players are also encouraged to maintain a journal, written from the perspective of the avatar, in which they can record notes, insights, thoughts on assigned Scripture readings and anything else.

The structure of a gaming session or "quest" is recommended as follows: First, an opening prayer. Next, a review of each player's journal. After this the gameplay itself, followed by a review and discussion of the lessons learned. After this come prayer requests, then the awarding of XP and Manna. Finally, the Game Master gives out a scripture assignment which will prepare the players for the next session.

At first glance, Realm of the Livingstones is published in a similar format as other, traditional role-playing games. There's a Player's Handbook, a Game Master's Handbook and an adventure module. The contents, however, are very different. The Player's Handbook has almost no rules in it of any kind. It has a brief discussion of the game, how it works, and how to set up an avatar. It has a reasonably well detailed Lore section, as well as sample avatar record sheets and journal pages which can be printed or photocopied.

The Game Master's Handbook has the same content as the Player's Handbook, as well as tips, suggestions and recommended methods of determining the outcomes of the avatars' actions. Most role-playing games rely on dice to help determine the outcomes of character actions. In Realm of the Livingstones, the Game Master has the option to use dice, but this is not encouraged. Instead the Game Master can simply decide on the outcome, use Bible trivia, or decide based on the player's spirit (how well the player is understanding the Biblical principles presented.) Dice are an option of last resort.

Modules are planned for release four times a year, and are designed to each take about three months' worth of gaming to complete. In this way, a steady stream of new content is released for players. Of course, the Game Master is free to create their own adventures, just as they're encouraged to modify and adjust the game rules to suit the needs of their players and lessons being taught.

The first module, A Spell of Gold: From Dunlow to Dreadwater is meant as the starting point for new avatars. All avatars originate from the small town of Dunlow, so it is a logical starting point. Each quest in the module is meant to emphasize a particular Biblical principle, and the players must apply their knowledge of that principle to find success in game. I won't go into details of the module content, in order to avoid spoilers, but I did really like the concept presented in the early game and I think a skilled and wise Game Master can really make an effective lesson from the gameplay.

The game doesn't specify any particular denomination of Christianity, and is almost certainly playable by any. The themes and setting are flexible enough to accommodate the particulars of whatever denomination it is used in. The world has no boundaries, so there is certainly room to add new elements and teachings. For example, a Catholic gaming group can apply Catechism lessons into the world. Book of Mormon settings can be added as a land across the sea or incorporated directly if played in a Latter-Day Saints group. 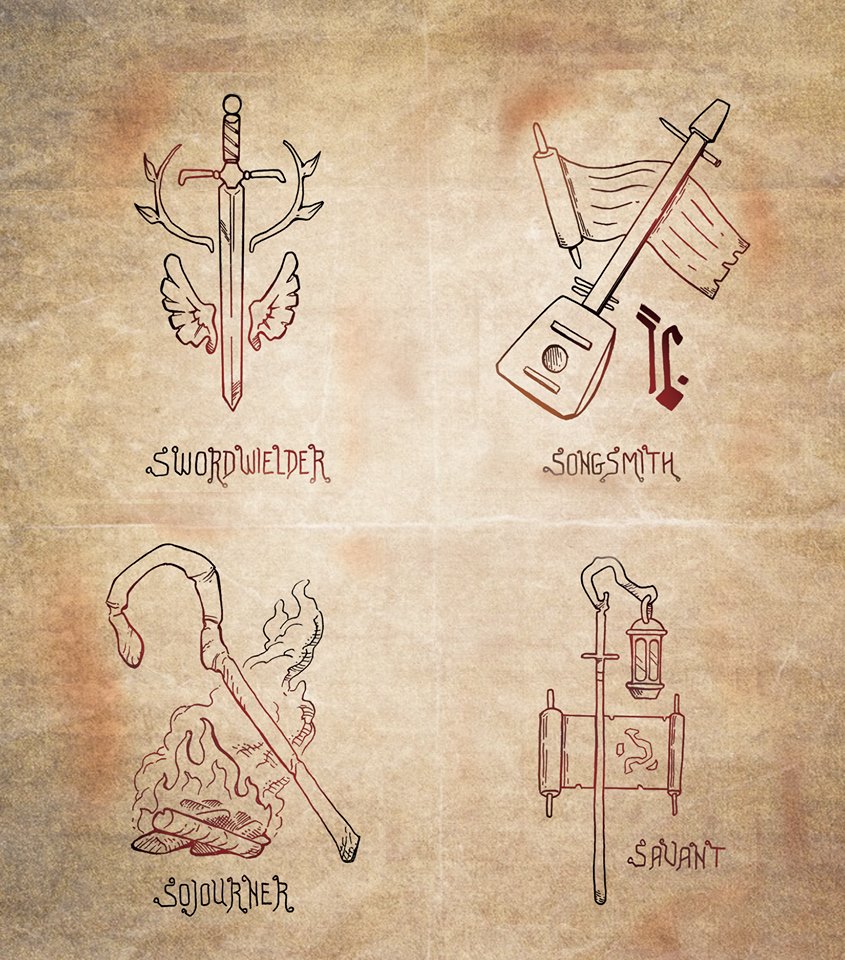 That said, there is undeniably a link between Realm of the Livingstones and traditional role-playing games like Dungeons & Dragons, and it would be a very difficult sell in a congregation that carries any suspicion of such games. I'm old enough to remember when Dungeons & Dragons was accused of being a satanic game, and even today some folks haven't let go of that idea.

Another item worth mentioning is that while there is no avatar class or subclass that represents what one would think of as a magic-user as such, there can be magical items or magical creatures. This is entirely at the discretion of the Game Master, of course, but removing the idea of magic from the game world would fundamentally alter the lore to the point of being unrecognizable, so if that level of occultism is still of concern this may not be the game for you.

The artwork in the books is of good quality, though predominantly female characters are depicted and not always in particularly modest dress. I can see where there may be some concern in that department.

Ultimately Realm of the Livingstones is a good idea for giving youth teachers a framework for making Scripture study fun and engaging, but I think the rules structure is too minimalistic. Even the most fair-minded and objective Game Master is an imperfect arbitrator of game events and having a stronger framework is a big help not only to the GM, but also to the players who would feel more secure knowing that there's a consistent baseline for how things happen in-game. The lack of a formal ruleset also makes transitioning between groups difficult, since so much depends on the individual Game Master and their approach.

My gaming club was open to doing a little playtesting but honestly without a rule set, there isn't anything to test from a strictly gaming perspective. A Bible Study group would be a far better testing ground.

Do I recommend this game? Certainly. It's a creative approach and holds a great deal of potential for fun and learning. I would add a caveat however... Someone who has never played a role-playing game before will likely be in over their head as a Game Master as they try to understand the concepts of such a game with such a minimal rule set. That said, I'm speaking as an old grognard. If you find yourself intrigued by the idea of this game, even if you have no experience, I would encourage you to give it a try.