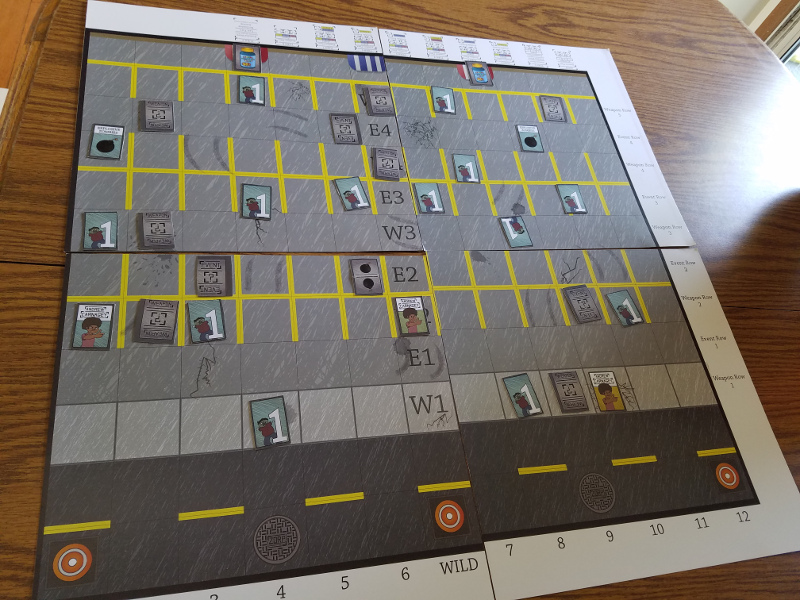 Thank you Wonky Rhino Games for sending us a review prototype!

ZORP is a table top strategy game that utilizes fun weapons like flame throwers, grenades, cars, and bazookas against hordes of zombies that are blocking the way to a cure.  Up to four players can play and there are only nine turns for the humans to make it to the limited number of cures available.  One player controls the zombie hordes while the rest focus on clearing a path to the coveted cure.

Each turn has two movement phases and one action phase and they can be taken in any order.  After all of the humans take their turn, the zombie master gets to move all of the zombies and play an event card if applicable.  The possible zombie events include super zombies, explosive zombies, zombies armed with slingshots, and resurrecting zombies.

Humans have events of their own including the chance to mow zombies down with a car, throw a grenade, wear faster shoes for increased movement, gain an extra turn via a distraction or recruiting the help of a rescued human.  There’s a wide variety of weapons available at their disposal including bazookas, shotguns, flamethrowers, and pistols.  Each weapon does different damage amounts and has a unique firing radius.  Intentional or not, humans can be hurt by them as well.  In our play-through, my daughter shot me to slow me down and ensure her victory of reaching the cure first.  If nobody makes it to the cure in nine turns, the zombie master is declared the winner.

All of my kids enjoyed playing the prototype of this board game.  Because of the guns and possibility of leaving piles of zombie parts behind, this game is rated 12+.  I can’t comment on the final build quality, but the artwork of our review sample is nicely done.  If you’re looking for a fun and unique kind of board game, then ZORP is worth checking out on Kickstarter.

Fruit-Full Kids
My Many Sons