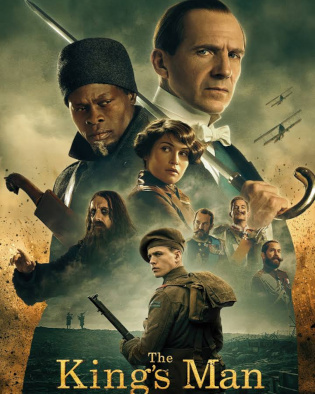 Thank you 20th Century Studios for sending us a Blu-ray to review!

The King’s Man is a prequel to Kingsman: The Secret Service and Kingsman 2: The Golden Circle. This origin story takes place in 1902 with Orlando (the Duke of Oxford), his wife, Emily, and their son, Conrad, supplying provisions through the Red Cross. A marksman’s bullet takes the life of Emily and wounds the Duke’s leg. Before she dies, Emily makes Orlando promise that their young son won’t see warfare again.

Fast forward twelve years during World War I and Conrad is a strapping young teenager and instead of pursuing females, he wants to jump into the battlefield to protect his country. The Duke has high-ranking military official friends who can only deter Conrad so much. In a last-ditch effort to convince him that there are other ways to save the country instead of being on the battlefield, the Duke takes Conrad on an undercover mission to assassinate Grigori Rasputin. Though the mission was successful, it didn’t change Conrad’s mind and he enlists anyway.

While his son is heading toward the battlefield, the Duke of Oxford and his elite agents are tasked with destroying film evidence of Woodrow Wilson being seduced by an enemy spy. With the evidence secured, the United States can join and end the war. I’ll leave the details of that mission and Conrad’s time on the battlefield a secret so I don’t spoil the film too much.

As you can imagine, a film that takes place on a battlefield has its fair share of blood and violence. The King’s Man is no exception here and you’ll see people being wounded, beheaded, and shot fatally. There are references to Rasputin enjoying male company and there are some sexual encounters with implied nudity, but only a bare back being shown. One of the characters is shown wearing boxer underwear. Language is pretty strong in this film and you’ll hear several instances of the F-bomb being dropped.

The King’s Man definitely earns its R rating and if that doesn’t bother you, it’s an interesting and entertaining re-imagining of history. After seeing this movie, my husband bought the first two and I look forward to watching the rest of this trilogy.