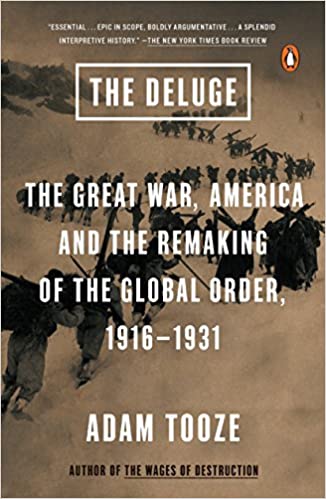 I am a big fan of history. So much so that while I'm sure some men my age may have far more unwholesome hobbies, my love of collecting history books is my far geekier and arguably much more wholesome alternative. One book I would consider a crown jewel for my history collection and that of anyone else is Adam Tooze's "The Deluge: The Great War, America and the Remaking of the Global Order, 1916-1931", which covers the transformative changes of economy and politics of the first World War.

Adam Tooze's stock in trade is economic history. While this text covers a considerable amount of that, it also examines the political aspects of the time in question as well. He starts his breakdown of the events in 1916 when the first World War had already transformed much of the world's politics and economic foundations and ends with the beginning of the Great Depression. The period in between is given an intricate breakdown, not only to show how the world reached that ending point but also, given its critical views, to show the tortured process by which the period changed the world stage both then and for future generations.

The book can be divided into thirds. The first portion is dedicated to how the World War had utterly upended empires and the system of financial support that had been taken for granted, which resulted in new political forces such as the rise of Bolsheviks, the declaration of the German Republic, and the preeminence of the United States as a decisive economic and military partner in the conclusion of the first World War. The second part details the Treaty of Versailles, the formation of the League of Nations, and how both not only fell short of ensuring a just peace, they also sowed the seeds of future conflict. The final portion shows how the remainder of the 1920s was held up by a fragile peace nominally based on economic stability until it was shattered by the Great Depression.

I came away from my readings of this exhaustive and detailed historical account with several conclusions. The first is that the United States, under Woodrow Wilson, made several missteps in trying to preserve its "moral" detachment from the rest of the World while paradoxically trying to mediate peace during the War. Their mistakes were complicated by the fact everyone else could little afford the idealism the US wanted to indulge and this led to the failure of a just peace. The diplomatic, economic, and political blunders of all sides in regards to Communism, the rise of proto-fascist movements, and the failure to support places such as the briefly democratic China while persecuting the Communists only created long-term political issues the world still deals with to this day. Finally, the Great Depression was inevitable as a result of all these blunders, though sadly could have been avoided or at least minimized through prudent statecraft, sounder economic policy, and a lot more goodwill and good faith than anyone involved had been willing to show at the negotiation tables.

Per Tooze's historical remit, this is a book I recommend for advanced history students with some degree of economic and international political training and learning. It has a lot of charts with economic statistics, detailed breakdowns of political actions and statecraft, and an exhaustive analysis of their consequences. This is not a book I'd recommend for casual students nor anyone easily bored by lots of details. The prose is straightforward if somewhat dry, so if you need a detailed text with lots of historical information with a pronounced lack of bias (Tooze's comments about the failure of certain politicians and economic policies notwithstanding), this is an ideal book for your taste.

In conclusion, "The Deluge" is a weighty yet worthwhile read for any serious historian. If its contents sound interesting, they can be purchased on Amazon in Kindle, hardcover, softcover, audio book, and audio CD formats.